What good am I, if I know and don’t do? If I see and don’t say, if I look right through you. If I freeze in the moment, like the rest who don’t try. What good? Am I?

Bob Dylan, What Good Am I? 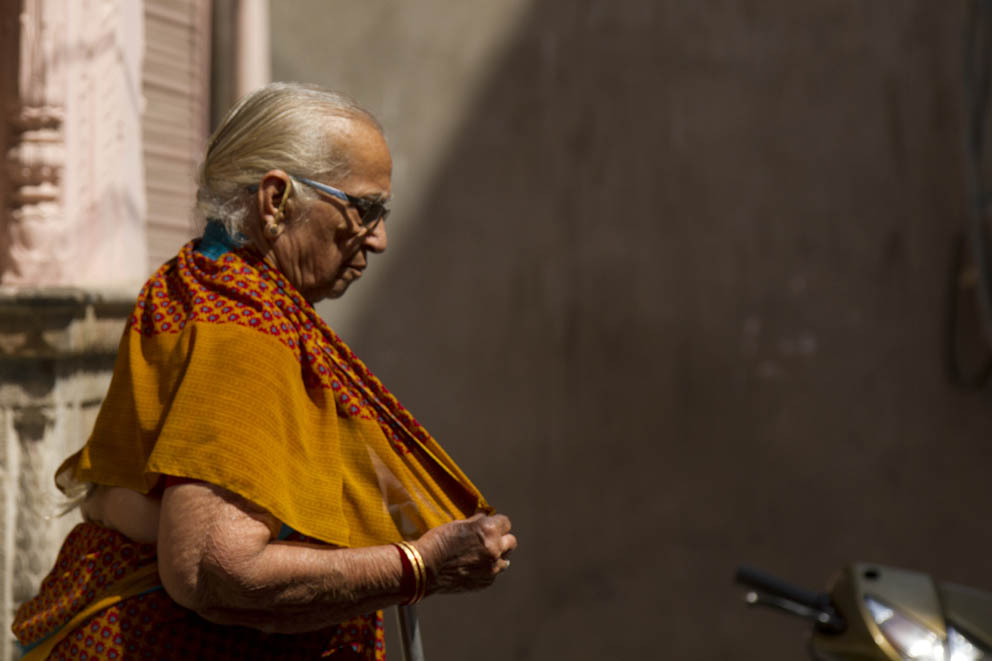 Yesterday at six I left my pleasant haven at Sunder Palace Hotel. Stopping only for coffee at Hotel Garaung, where elderly middle class South Indians breakfasted on idlis and thin dahl, I headed for M.I. Road – after Mirza Ismail, prime minister to the nineteenth century Rajput kingdoms of Mysore, Jaipur and Hyderabad – to flag down a rickshaw.

The grey-head, silver-stubbled rickshaw wallah smiles at my vile Hindi. Warming to his open face I figure that, while he looks my age, he’ll be fifty tops. He shrugs his narrow shoulders.

And with that we’re away. It’s not yet seven but the sun has already shifted red to orange to withering yellow, and climbed high enough above the city’s jagged eastern skyline to fry us both. Beads of sweat gather on my man’s neck as he stands on the pedals to coax his weight, my weight and the rickshaw’s from stationary inertia to what passes for momentum on these dire surfaces, in this chokingly relentless trafficular free for all. Within a few minutes his shirt of faded grey is drenched as I reach for the factor fifty.

The night before I’d turned down a rickshaw wallah of similar age. I’d wanted only to take in the evening air but his look of dignified resignation, a far cry from the persistence of tuk-tuk drivers who seldom take the first no as final, did not go unnoticed. As he peddled back into the night I mused on the distinct possibility that my decision had made the difference between his taking home a kilo of attar, and a bunch of folk I’ll never know going to bed hungry. It doesn’t do to dwell on such things; that way lie despair and paralysis. But nor does it do to refuse to see the heart-rending poverty, its sheer scale – in this land of extremes and corrupt indifference – dwarfing anything I’ve seen in far less developed countries across the so-called third world …

… and in that refusal shed one more thin layer of humanity: another day older; another day harder.

At Ajmeri Gate, most grandiloquent of several entrances to the Pink City, I disembark, hand over a hundred rupee note, savour the man’s unfeigned delight. A handshake, a backward wave, and I step forth into a sea of bazaars, narrow lanes and narrower ginnels. All busting with life in its seamless totality of vibrance and squalour. With India as with so much else, the best approach really is to dive on in.

One Reply to “Rickshaw wallahs and other stuff”