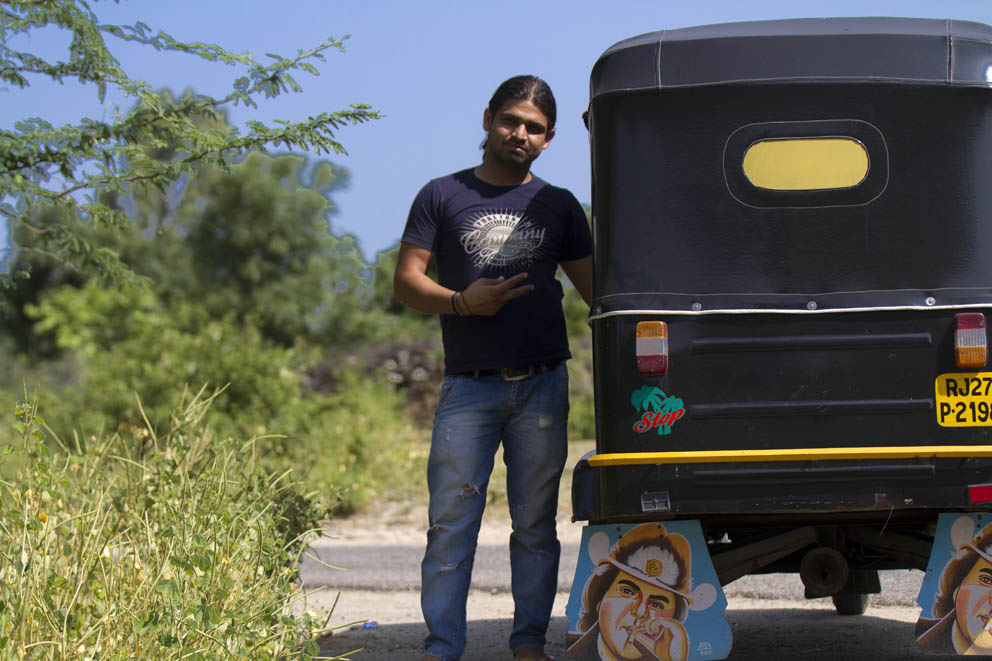 Khan Khalil was a frequent companion in Udaipur. We hung out in chai shops. He showed me the countryside: me in the back of his tuk-tuk when road quality and gentleness of incline allowed, riding pillion on his Honda Hero when they didn’t. One fond memory has me surfacing after a leap into Tiger Lake from the roof of a bank side temple, to be greeted by his wide smile as he sat guarding my camera bag, his broad handsome features framed by shoulder length hair of lustrous black.

Khan eased my transit to and accommodation in Bundi, and found solutions to a raft of knock on issues when I broke my one power adaptor. In sum he’s a man for all seasons but now I’m less concerned with his talents and generosity than with claims of high caste – Kshatriya, or warrior – Muslim status. That very insistence by non Hindu Rajputs across the centuries, not only on inclusion in the caste system but in one of its premier divisions at that, has the ring of the outsider muscling in. As well it might, though who is on the outside and who already “in” India’s rich cultural fusions are questions far from simple.

The past few millennia of India’s history, with Delhi, Punjab and Rajasthan at the gateway from Central to Southern Asia, have a way of putting seemingly huge forces – like Alexander’s and the British Raj – in context. Such phenomena have happened before, and many times. We know Aryans entered the subcontinent around 1500 BC, settling first in the northwest. They brought Sanskrit, mother to most languages now spoken in India, and wrote the collection of hymns and liturgical texts known as the Vedas. At this point references to four cardinal caste groups appear, though with the early Vedas as idealised as they are obscure, we should not assume they do more than codify social divisions already present.

(Efforts to map caste onto class throw up more questions than answers. That holds even if class is understood as sociocultural, and doubly so with marxist understandings of class as economic and oppositional. Worth a read, though simplistic in places and ahistoric on class, is this.)

The next set of classic texts, the early Upanishads, appear in the first millennium BC to make further reference to caste. Between the Upanishads and arrival of the British – who made their own additions to and uses of the caste system – virtually the entire subcontinent was impacted culturally, linguistically and indeed genetically by wave on wave of influx, much of it of Turco-Mongol origin. Sometimes invasion came swiftly, through Persia and Afghanistan. Sometimes it took place over centuries and millennia, as with the Mughals. And sometimes an incoming wave broke and retreated; as when the overstretched sons of Genghis Khan, with India and her riches at their feet, deemed the prize not worth the administrative burden and left it to be claimed by a nascent Delhi Sultanate – itself of Turco-Mongol stock – which would in turn give way to the Mughals. How do we know such things? Where written records are thin we have other legacies, including language itself. Linguistic commonalities that unite Spanish and Bengali – and by their absence make Basque and Hungarian such mysteries – act as socio-cultural dye, revealing something of the incursive forces through which India’s kaleidoscopic identities were formed.

And what has this to do with Khan Khalil, a young Muslim claiming Kshatriya caste? Those broad cheeks give some clue. When the Upanishads were written the ‘Rajputs’ were nowhere in sight. They first appear in the sixth century AD: seven hundred years before Genghis’s armies would sweep in from the Mongolian Steppe but – crucially – long after  those other Central Asian incursions hinted at above, and ones earlier yet. What religious beliefs they held we can only guess but modern Rajputs are represented not just in Hinduism. In 500-600 AD Mohammed lay a hundred years in the future, Guru Nanak closer to a thousand. Neverthless many of those upstart Rajputs now practice – without for a moment laying aside their claims to Kshatriya status – Sikhism and, as with Khan, Islam.

The Rajputs were sufficiently warlike for the British, who categorised and hierarchically ordered “the Indian races” on martial criteria, to allow the “Princely States” a high degree of self rule. On the face of it – and I make no claim here to scholastic depth! – there are similarities with the Pathans of the Khyber region where modern Afghanistan borders with Baluchistan in what was the North West Frontier Province. Both groups sport magnificent turbans, both go in for facial hair in abundance (moustache only in the Rajput case). Both are renowned for their hospitality … 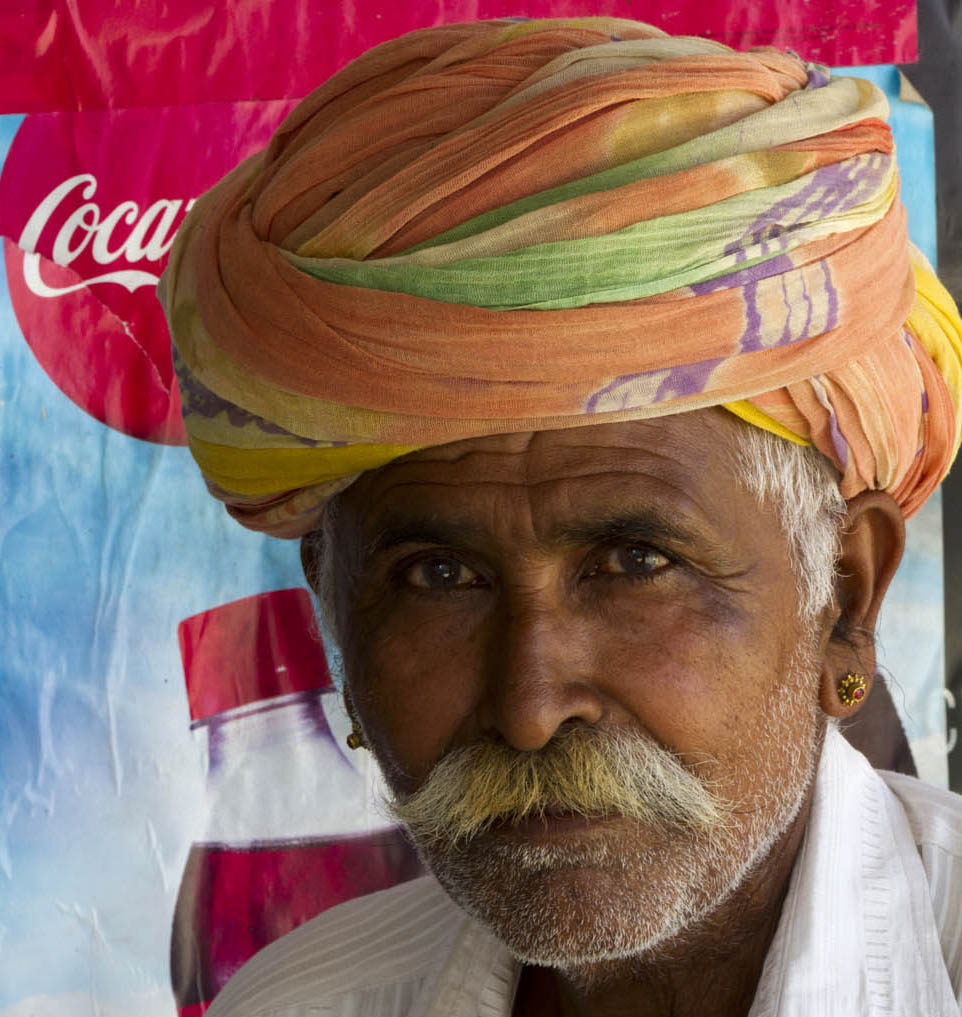 (Stubborn lad that I was in 1974, a dispute with a venal taxi driver east of Jalalabad saw me ascend the Khyber on foot. At the top lay Landi Khotl, neither Afghanistan nor Pakistan proper. The Pass itself had been a let down given its iconic status in the imagination of every British schoolboy of my generation – give me Honister any day – but Landi Khotl restored my faith. And how! I’d been in the place, its feel that of a township subject only to gunlaw and frontier justice, not three minutes, pondering my next move. Looking up, I was horrified to lock eyes on a huge man with huge beard and huge disk-like turban, bearing down on me with huge strides as he fixed me with huge scowl. The whole was driven home, just so you have the full picture, by a Kalashnikov slung over one shoulder, band of ammunition over the other. He stopped dead in front of me, slammed a hand – yeah, that was huge too – down on my quailing shoulder. “You; me – coca cola!” )

… both display uncompromising pride …  both have reputations for fearlessness in battle. So why have neither featured as prime movers in the subcontinent’s plethora of empire building projects? Here too Pathan and Rajput share something: a sense of loyalty that’s quintessentially clannish. Fealty is to local group and warlord, with wider alliances famously temporary and shifting in ways that preclude the marshalling of vast forces in the style of Alexander, Genghis, Akhbar or come to that the British Raj.

It’s difficult to know what my friend Khan Khalil would make of all this; I lack the skills to put it in spoken words simple enough for one whose first language is Urdu/Hindi creole. Maybe he’s aware of the forces I write of; maybe he knows enough to put me straight on a point or two. And maybe he’s just too preoccupied with the demands of making an honest buck to worry over such matters. Yeah, I reckon that’s about the size of it.