Last night as I sliced peppers in the kitchen, too slow to switch from BBC Radio 4 to 3 before the seven oclock ‘news’ put a Tomahawk size dent in my mood, I caught the latest Assad evil. On my PC I checked corporate media both sides of the Atlantic. Sure enough, ‘evidence’ of fifty innocents a day hanged at Saydnaya Gaol amounted to a few meaningless images helpfully interpreted by ‘impartial experts’.

Bugger,  I thought. Just back from my camping trip and now, instead of relaxing with G & T and all the trimmings, I have to pen a post on this!

But as luck would have it, I didn’t have to. Today’s OffGuardian piece by Catte says what I’d have said, only she does it better.

Remember “Saydnaya Military Prison”? It was the subject of enormous media attention a while back on the basis of a “report” from Amnesty International that turned out to have been fabricated in the UK by a virtual reality company “using 3D models, animations, and audio software, based on the admittedly baseless accounts of alleged witnesses who claim to have been in or otherwise associated with the prison.”

Well, the totally imaginary interior of Saydnaya now – according to US State Dept – has a totally imaginary “crematorium” added to it in which to dispose of all the totally theoretical corpses being generated by the completely unsubstantiated mass-murders. Here is the impressive and plausible Stuart Jones telling us all about it.

Yes, he lies about the “well-documented” chemical attacks. Yes, he manipulates and exaggerates and omits to the point of fraudulence in his summary of the “civil war.” Yes almost every detail of his claims about the goings-on in Saydnaya is based on Amnesty’s invented “report” and the completely unverified testimony of alleged inmates…

…but, but … they have satellite images!: 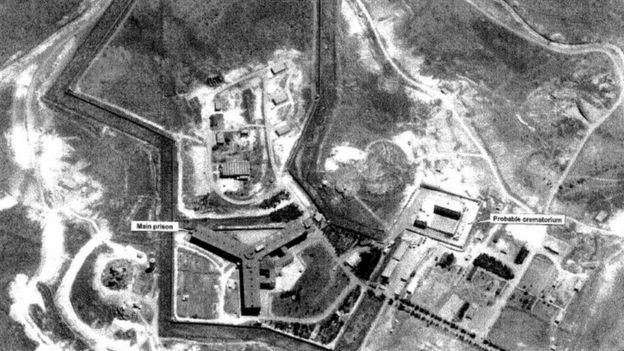 In case you’re not getting the message WaPo kindly enhanced and simplified things: 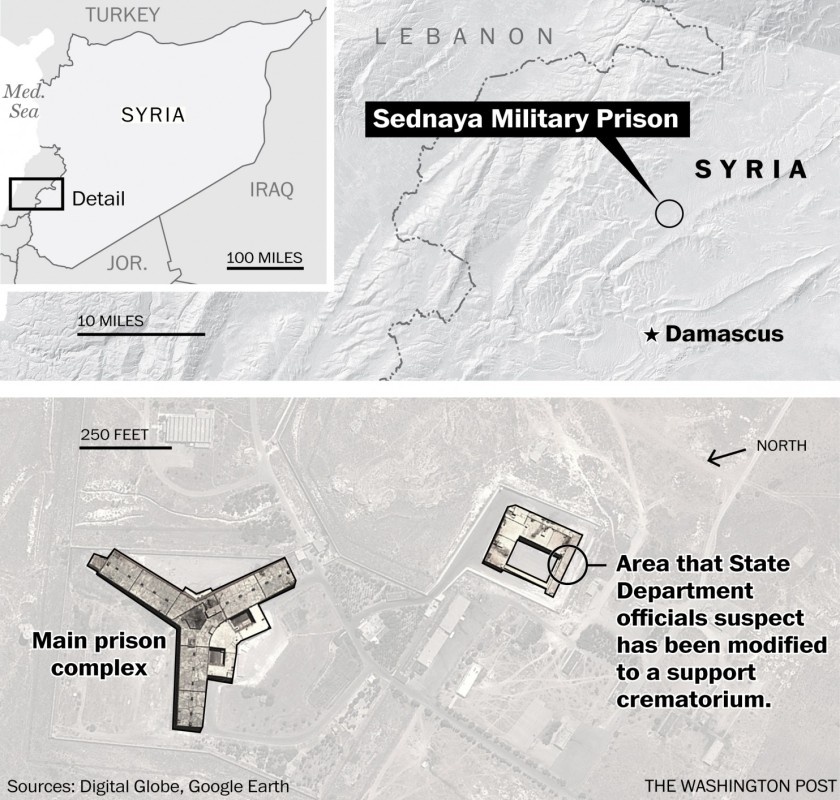 See? That thing on the right that could be absolutely anything is actually a crematorium. The State Department “believes” it with all its heart and wants us to believe it too. As do the Guardian the WaPo and the BBC and every other mainstream outlet. They want us to ignore the total absence of any evidence whatsoever for any part of their narrative and simply take their word.

That’s a “crematorium”. And it’s being used to burn masses of bodies. Just like in the Holocaust.

Because Assad (and Russia) = Hitler.

We need to tear up the ceasefires and ignore the de-escalation zones and invade Syria.

Yeah, I got it Catte.