This appeared a few minutes ago in posts selected for me by Facebook. 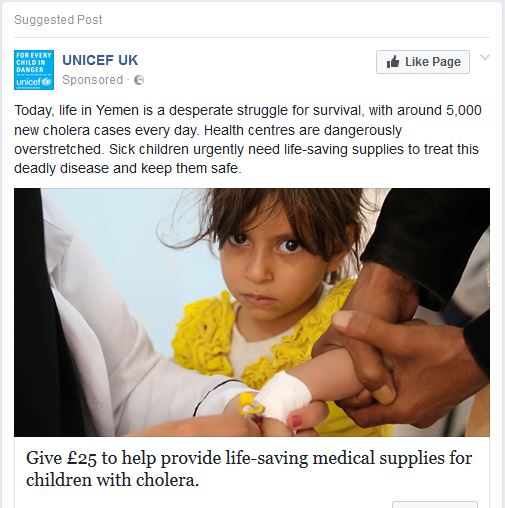 Am I an extremist to note the absence here of any reference to war crimes commited in Yemen by our friends in Riyadh? Am I an extremist, and pedant to boot, that I note the profit flows to Western arms suppliers, including but not confined to a Rolls Royce whose engines power the Tornado jets snuffing the lives of Yemeni farmers and their children, along the way creating the conditions in which cholera and other diseases needlessly prosper?

Don’t get me wrong. I don’t blame Unicef for omitting to mention such matters. They have a job to do. Narrowly defined – alleviating suffering here and now – it can only be harmed by taking a ‘controversial’ stance, however correct. Similarly, I understand that under capitalist relations of production, workers in Rolls Royce factories, with children of their own to worry about, draw sighs of great relief at those Saudi deals.

The context here is a world order – a very particular way of organising social relations to create and recreate the material conditions of human existence – in which such responses make sound and perfect sense. Narrow sense, yes, but one whose logic is hard to resist.

Of course, there’s another way of saying the same thing: that a world order in which such things do in fact make perfect sense is a world order of monstrous and criminal insanity. But if I were to come right out and say something like that,  well, that would make me one of these here extremists, wouldn’t it?