My Taiwan posts lack the personal touch, I know. Accounts of Chiang Kai Shek’s White Terror and the geology and history of Taroko could have been written without chalking up the carbon footprint – though my views on reducing capitalist destruction of nature to a matter of lifestyle choice are probably clear by now – of my travels here by plane, train, bus, scooter and ferry. In theory at least, though I doubt I’d have got round to it in practice, I could have penned them, with links to better pics than I’ll ever take and process on an S7 Edge, from my home in South Yorkshire.

By contrast, my posts from other countries in the global south are so personally implicating I absolutely had to be there to pen them. Take this one from Ethiopia six years ago, this from Vietnam last year or this from India in March this year. All differ from one another I hope – or what’s the bloody point? – but they find commonality in putting yours truly in the frame. In fact that’s always been a big part of my aim in travel writing: to find an impersonal perspective on personal experience; to locate myself – and I see this as stance for life itself – between what a sorely missed Leonard Cohen spoke of as the newsreel and our tiny pain.

So why, trials and triumphs of wild camping and hitchhiking aside, is it so hard to do that in Taiwan? Because my vehicle of choice is to tell of encounters with the natives, and for two mildly contradictory reasons these have been less rich here, less leavened by that spark of recognition – not despite but because of gulfs in culture and experience – of shared humanity asserting itself in situations too mundane to find their way into textbook or wiki. Blake, worlds, and grains of sand spring to mind. Or as I used to tell my students: ‘your essays must balance particular with universal; specific with general. Stray too far either way and the results will be boring’. (Said students weren’t always Einsteins but I rarely felt the need to add that boring the reader, in a situation of asymmetric power, wasn’t such a great idea.) This truth applies to other genres too of course – but playwrights, novelists and lyricists already know that.

We can even express it epistemologically. Philosophical idealists maintain (not always explicitly or even consciously) that truths about the world can be derived through intelligent reflection, using logic and deductive reasoning, without leaving one’s armchair. They find mirror opposites in empiricists, who insist information gained through the senses is sufficient for arriving at truths. Then there are those, like me and my pal Karl, who say empirical engagement with the world is a necessary but insufficient condition of knowledge. We must also apply abstract reasoning to tease out the true relations between observable phenomena.

I do hope I’m neither an armchair speculator, nor the kind of traveler who’s seen much and thought about nothing. I travel to avoid idealism. I write – the best way to think I know of – about my travels to avoid empiricism.

But I’m supposed to be setting out my twin take on why my posts from Taiwan are more abstract than those from India or Vietnam. The more important of the two reasons I offer is that Taiwan’s per capita GDP (like that of mainland China’s eastern seaboard) is higher than in the global south at large. When we get rich we get introvert. Absolutely we do: you can see this in the west, in the difference between working and middle class experience. The thrust of upward mobility – bus rides to car ownership; rented terrace to mortgaged semi – is to remove oneself from the crowds. Our most existential dilemma, me versus we, has us jockeying for a tilt to the ‘me’ even as its very nature condemns us, however successful our efforts, to ambivalence over the fruits thereof.

To cut the crap, Taiwan – while friendlier than the west, as we’d expect from its intermediate status (average salary $20k) in the affluence tables – is more reserved than other countries in the south. The kind of encounters that in Jaipur informed Photography and the Holy Qur’an are less likely here. They’re not out of the question – as they’re not out of the question in Zurich or Oslo – but they happen less.

The other reason is that English is less widely spoken here. I call that mildly paradoxical, or contradictory of the first reason, because within those southern nations of lower per capita GDP it’s usually and for obvious reasons the better off who speak my language. Yet when I hitched north from Dulan yesterday two of my three lifts were in vehicles way out of my price range but, of a combined headcount of six, only one spoke English, and poorly at that.

(I shouldn’t need to say this but in so fraught an age of political correctness let me add that I make no assumption that people should learn English to save native English speakers like me the bother of learning their language. I’m simply observing an important phenomenon.)

In tandem the two factors limit my engagements. I won’t say to zero – my next post will recount some of the war stories, and they aren’t entirely tedious – but to few enough for this trip to be markedly different from those I usually take. Will I be back? You bet. This country is too gorgeously and impossibly beautiful for me not to return, but I’ll come more in holiday than travel mode. The way I visit London or Barcelona, Lake District or Dordogne.

In a spirit of compensation for such wordy abstraction – for so prolix a post, as my pal Mark might say – here are pictures, with minimal verbiage, from last night in Taipei’s kaleidoscopic and gastronomically mind blowing Raohe Street night market. 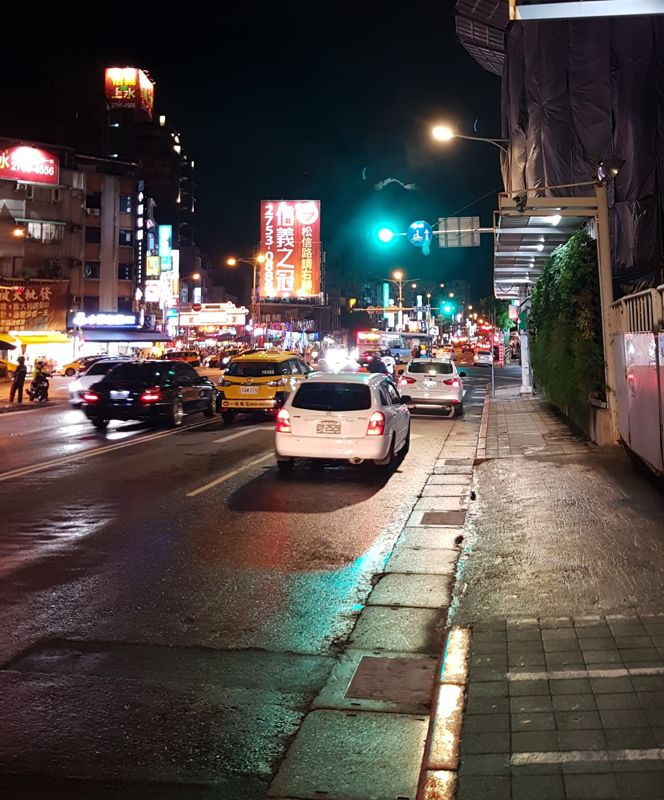 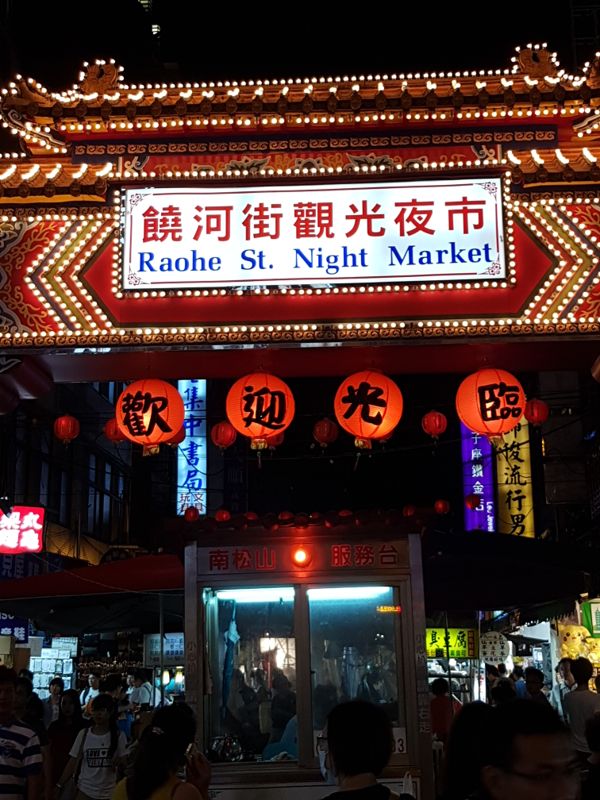 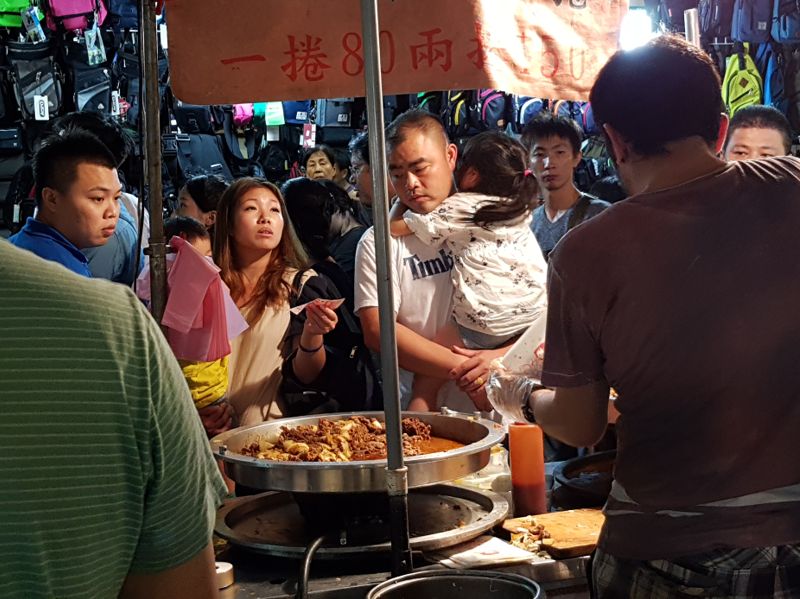 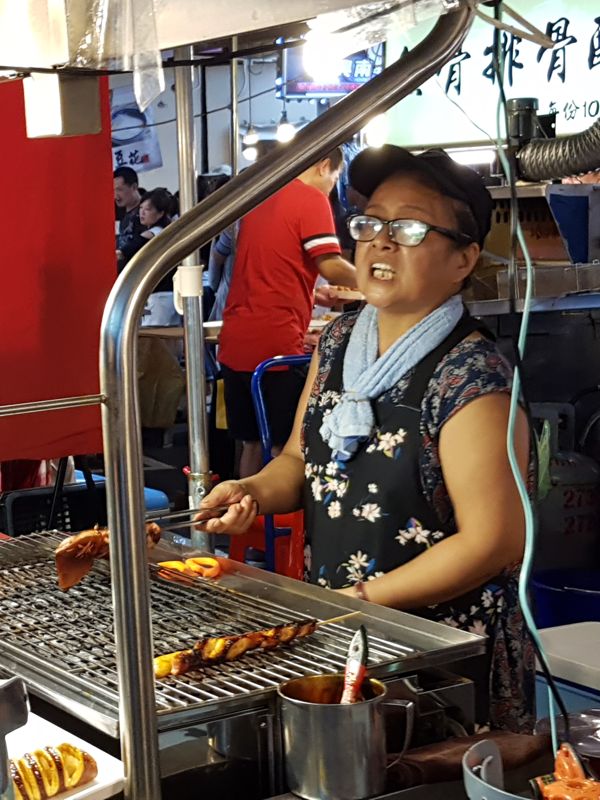 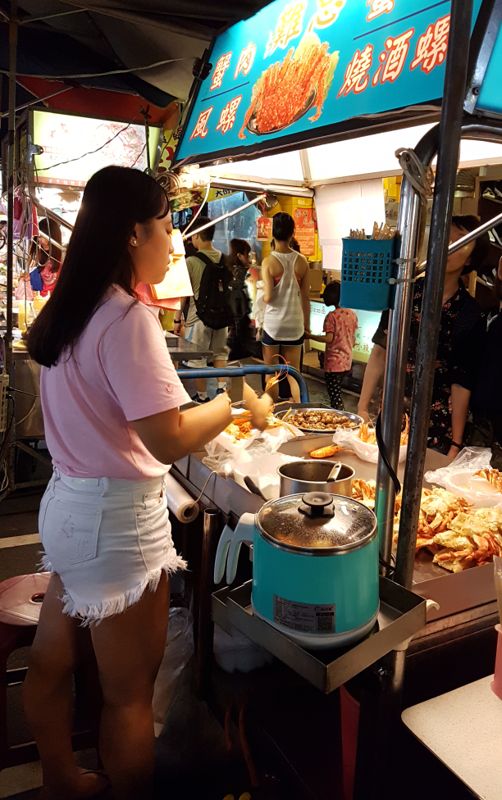 This young lady is offering seafood. I chose some kind of crab with prawns. The prawns were so so: with age I’ve come to prefer the bits I used to be too fastidious to enjoy; brown meat over white in a crab, head over body meat in prawns.

And the crab? Best I’ve ever tasted. 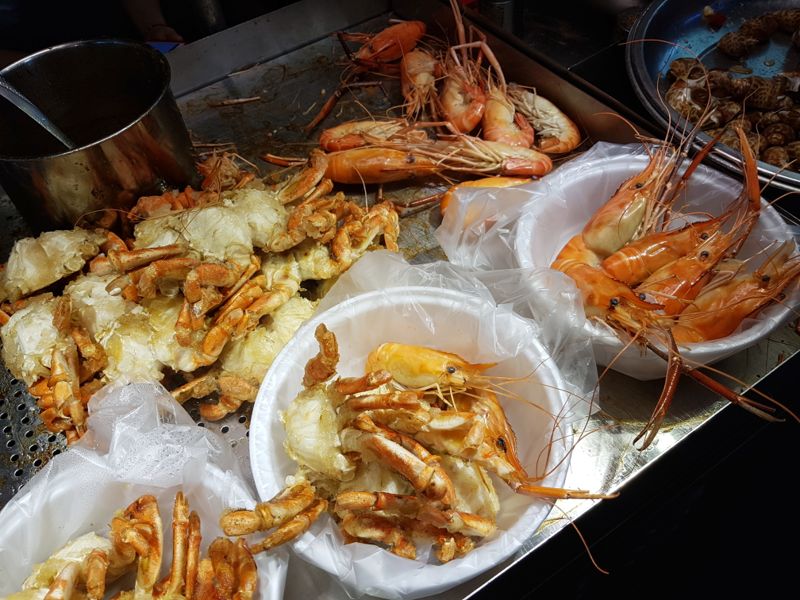 Sadly, it filled me up too much to perform for England on the cornucopia of rival offerings in a market whose main street – with several side alleys at rightangles – runs for the best part of a kilometre … 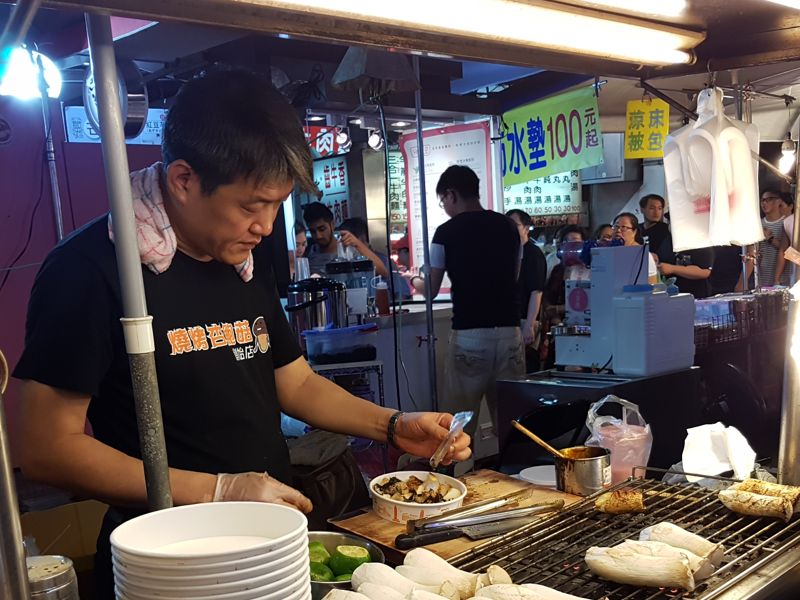 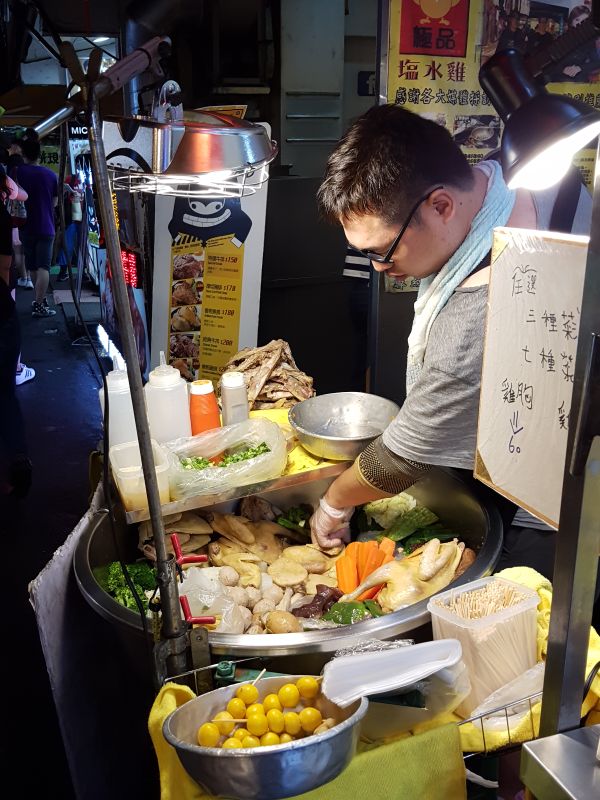 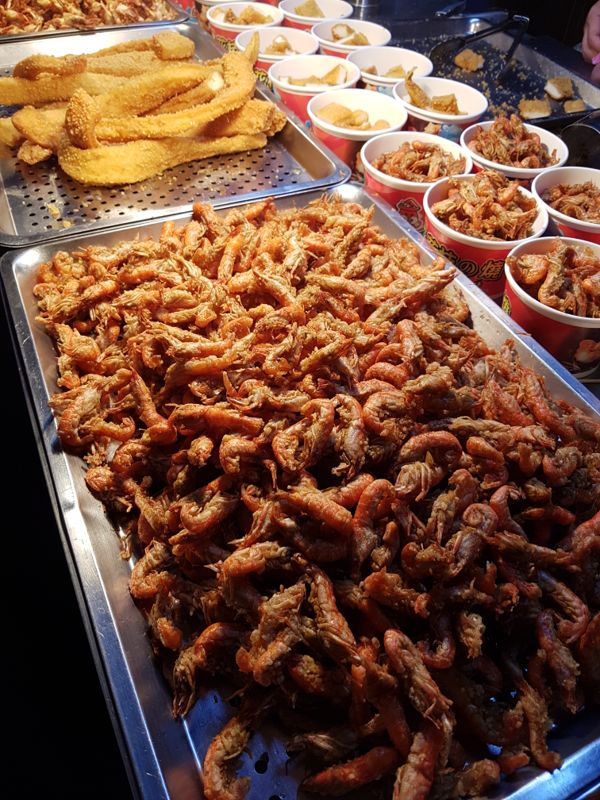 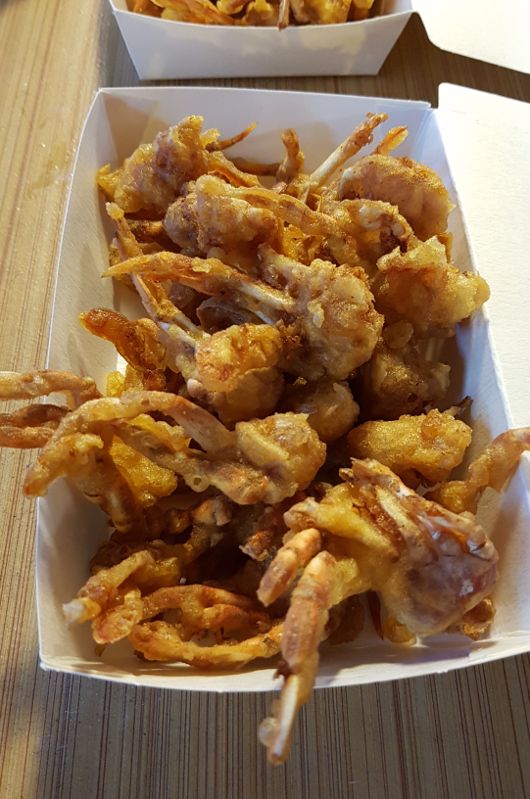 … though I did rally for a stab at these crab shells packed with crab meat, sweet potato, coriander and chilli. Exquisite. 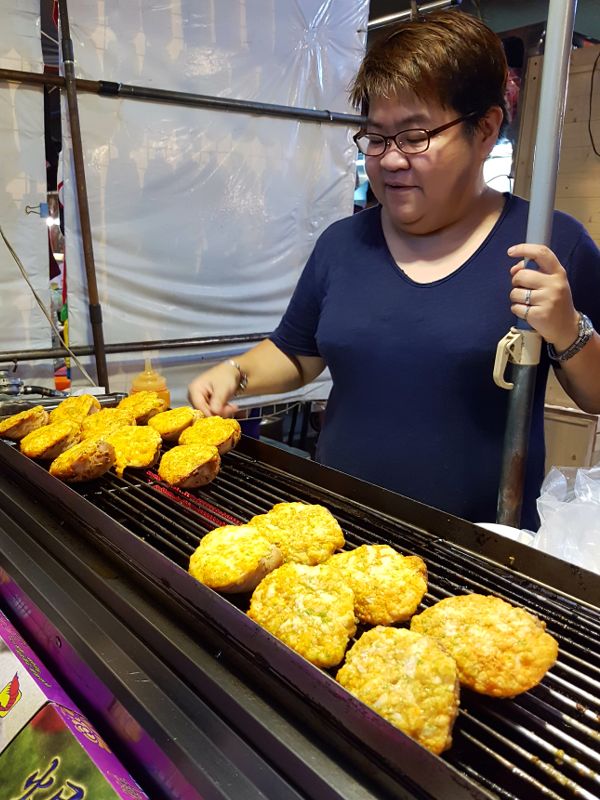 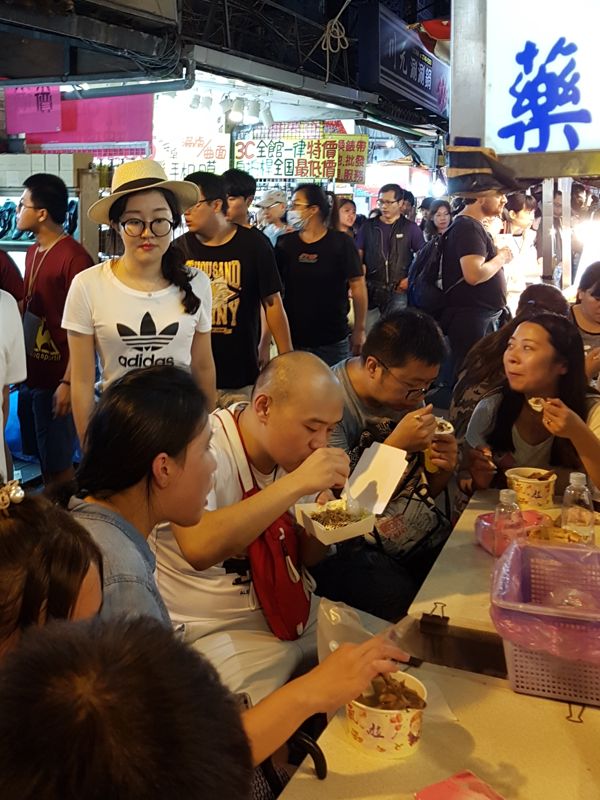 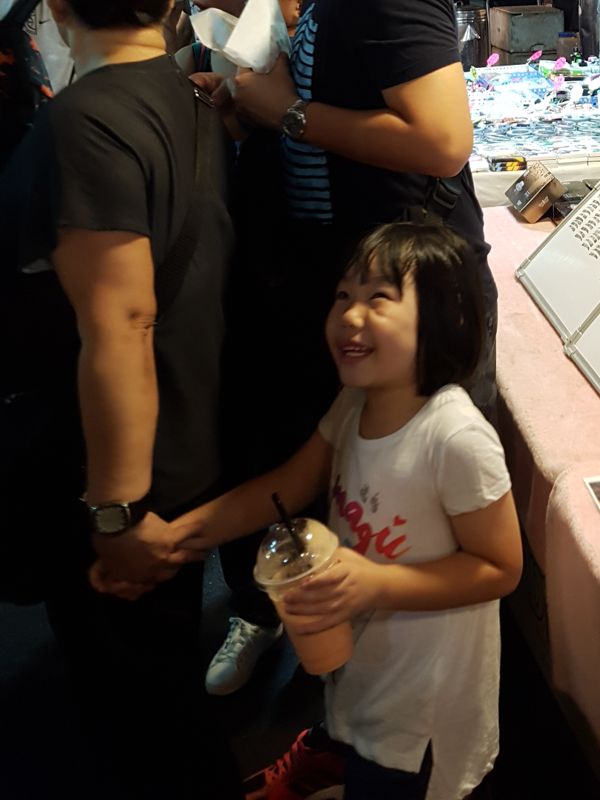 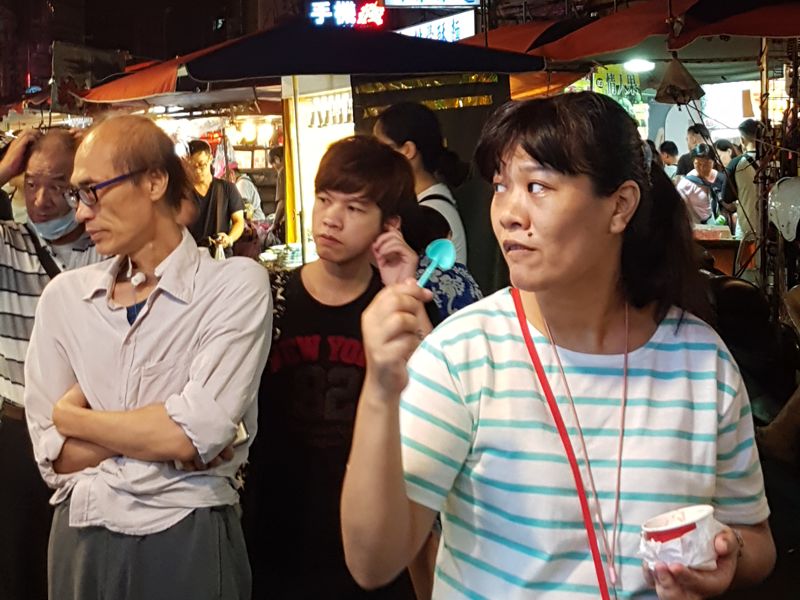 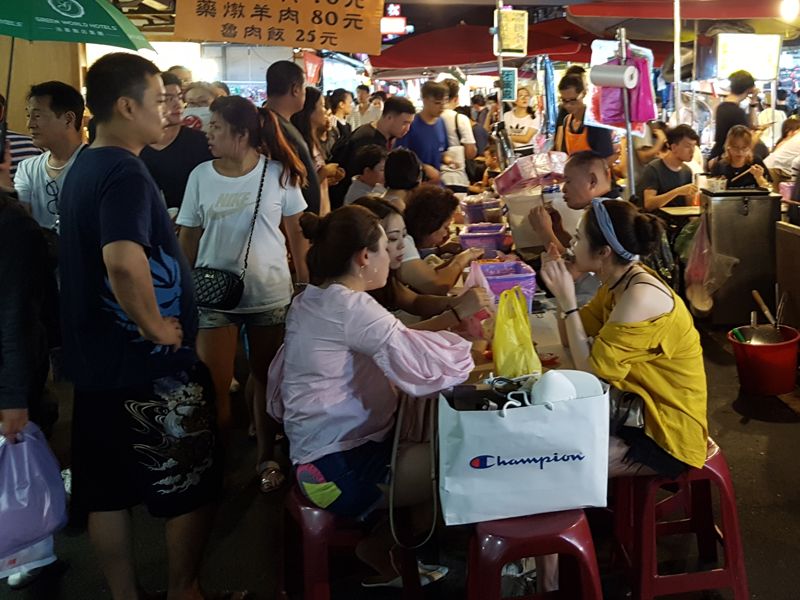 A well connected Bengali pal once told me he never met a Chinese man – and he knew many – who didn’t gamble. I guess that applies both sides of the Taiwan Straits, and to the women too. 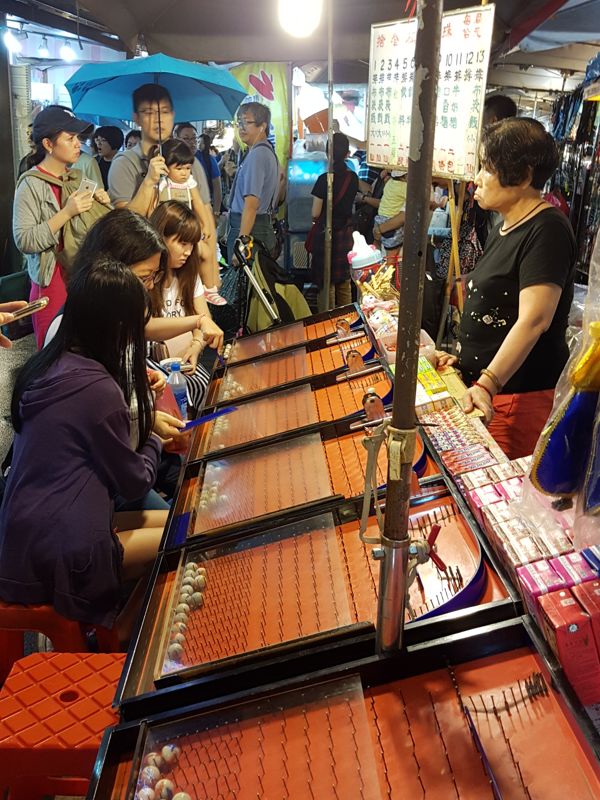 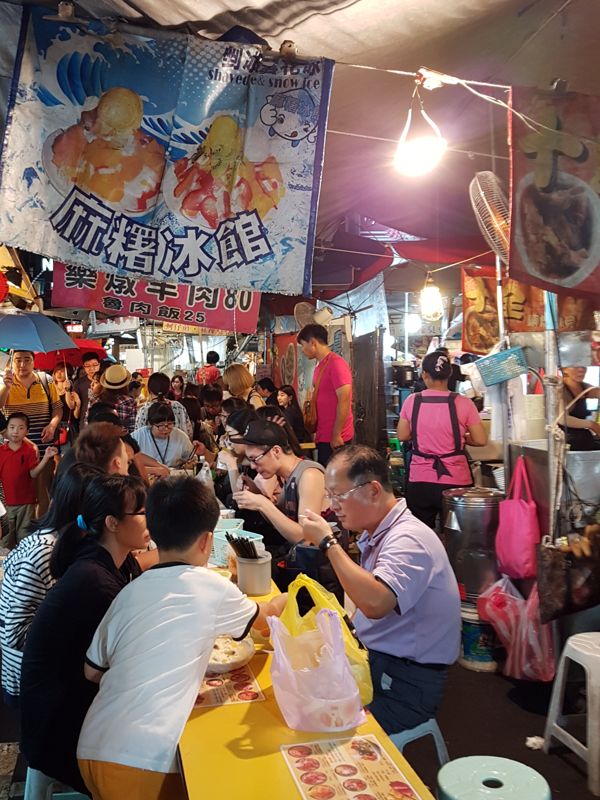 My needs and desires fulfilled, I returned to the Sleepy Dragon Hostel on East Nanjing Road, and to the sleep of the dead.

7 Replies to “Travel: universal and particular”