I saw the Roger Waters film, Us & Them, on Sunday night. As Pink Floyd fans would expect, the pairing of those genre-shifting extravaganzas of sound and vision is second to none. As when the chorals of Dark Side, and kid’s verse from Brick in the Wall, are delivered by orange clad detainees, stood motionless on boxes with arms outstretched. 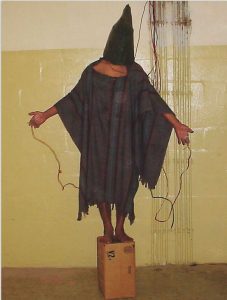 Ever wonder why, no matter how many horror shows like Abu Ghraib come to light, Amerika gets away with rape, pillage and murder on a historically unprecedented scale? Only today I heard of new sanctions against China for “human rights abuse” against the Uyghurs. Leaving aside the fact that as usual the allegations come from parties tainted by self interest and past form, the hypocrisy is stomach turning once you let in how and for whom the world is run.

And yet the most dangerous nation on earth still enoys the support, albeit at times grudging and tinted with cynicism, of most Westerners.

Ever wonder why Obama couldn’t deliver on closing Guantanamo, nor Trump on working with Putin? You need to mug up on the deep state. That and the workings of imperialism in its lead nation.

To help in that, FB buddy David Paul Jacobs alerted me to an unusually lucid piece of two days ago in Strategic Culture on Ukrainegate. Written by Tom Luongo, political analyst in Florida, it begins:

The impeachment of Donald Trump is more likely than a lot of people realize. While the Democrats are over the moon at finally getting something on the President to hang on him, the reality is the Republicans who will ultimately decide Trump’s fate.

Impeachment is a political process, not a legal one. There is no legal standard for ‘high crimes and misdemeanors’ as stipulated in the Constitution. That definition will stand on what the nominally Republican-controlled Senate think.

That Trump is facing this attack reflects him doing a few things anathema to his political opposition, and they have all hit nearly at the same time:

For these ‘crimes’ and others, Trump is, in my analysis, likely to be impeached. And the reasons have nothing to do with his guilt vis a vis abusing his office.

2 Replies to “Ukraine: Trump and the deep state”