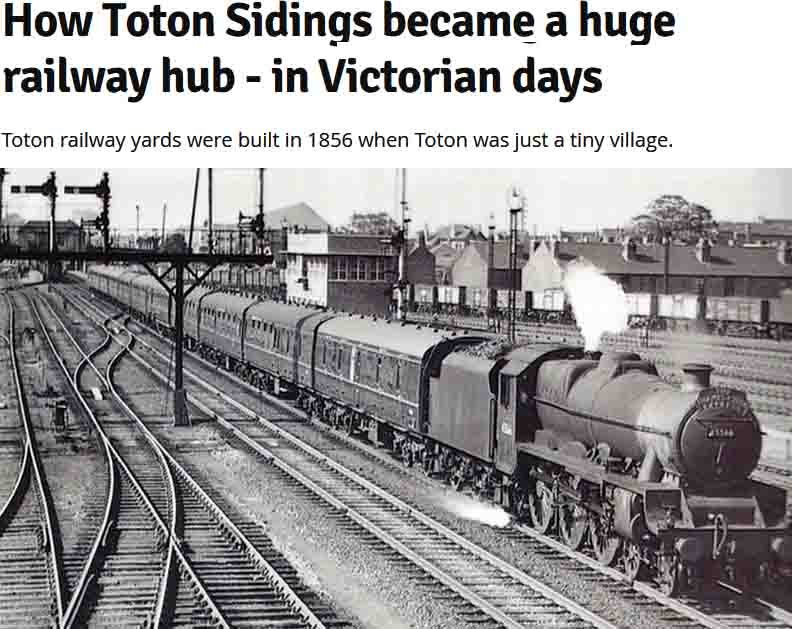 The Government has confirmed that Toton Sidings, one of the largest rail depots in the UK, will be  part of the new HS2 high-speed rail network.

Toton Sidings are closely linked to the coal industry. East Midlands coal owners seized the opportunities created by the Midland Railway. Steam locomotives were faster than canal barges to carry coal for industry and the domestic market.

With the need to marshal coal traffic, the yards were built in 1856 when Toton was a tiny village. Local historian David Copeland has many boyhood memories.

“With the railway centres of Nottingham and Derby on my doorstep, along with Toton Sidings, it was an ideal place for a train enthusiast.”

I empathise. As a lad I’d have spent time there too had Toton Sidings been my home turf. In the year of that photo, and a good few to come, the boy adventurer had only a watchman – “watch thissen: t’bloke’s coming!” – to contend with. To trainspotters and urban thrill seeking kids, the pull of a railway goods yard was like a magnet to iron filings. 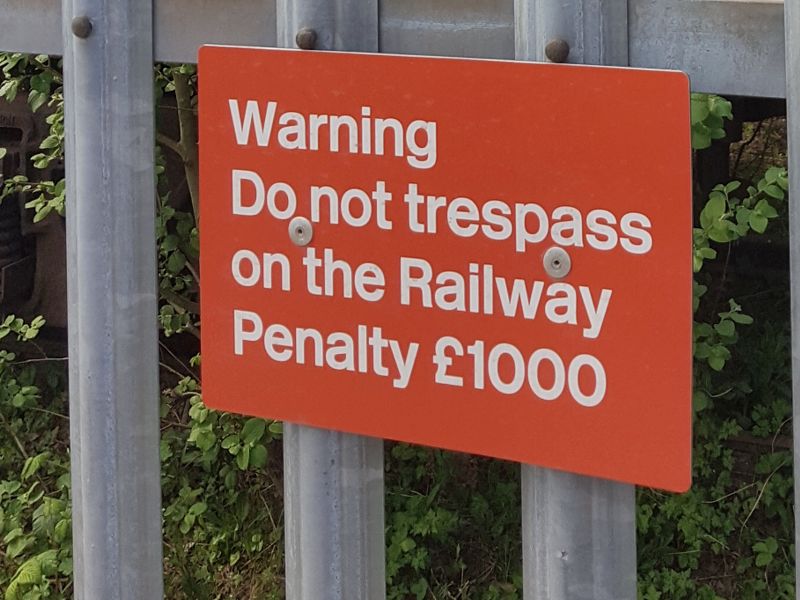 Both Toton Sidings and the car breakers yards which hug its eastern perimeter – on grimy lanes of potholed neglect that peter out into cinder track edged by the hawthorne, birch and rosebay willow herb of wasteland reclaimed by nature – are fortified in ways unknown to Fifties Boy. I look back to a time when a loose paling, hidden by a bush and known only to the cognoscenti, could be leveraged by the wiry. When a wall topped by broken glass in gobs of cement was no deterrent to the intrepid, and CCTV the stuff of science fiction. Not to worry. My interests are not the same either. Ditto my assets. As a kid I had no 7D Mark II, with L-series lens and extender to give a focal length of over 600mm – rising, I’m talking to fellow geeks now, to almost 900 with the 1.6 crop factor of the 7D’s APS-C sensor. Throw in the fact, related last week in Walking the Erewash, that the terrain immediately east of these sidings rises sharply:

… to the birch uplands of industries gone. From hills of impoverished soil we gazed down over concrete and barbed wire, on the ghosts of Railways Past … on the ​cracked hulks ​of locomotive​s​ and rolling stock long ago shunted into this graveyard ​for the rusting ​by cloth capped men in oil streaked blue. Their spirits haunt these sidings of spent destiny …

On that day, with only my phone – good for many a decent snap but unsuited for this – I didn’t even bother. Today I’d be delighted to be allowed in to wander and click to my heart’s content from every angle, but I’m happy enough with these results from the ridge of a steep and grassy scramble a few yards from, and parallel to, that eastern perimeter fence. 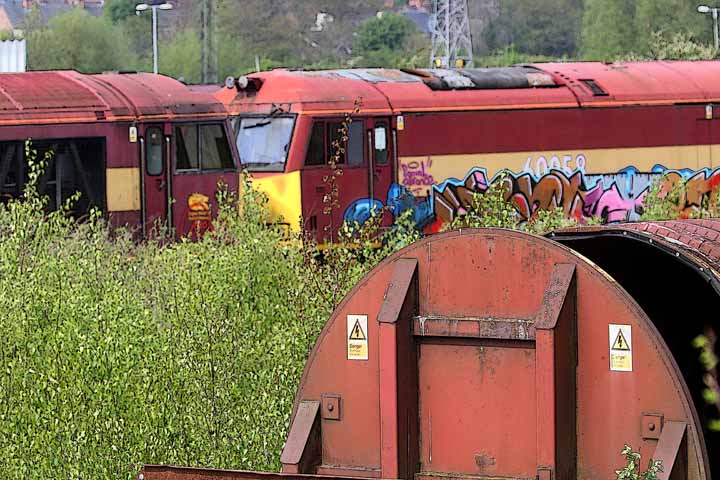 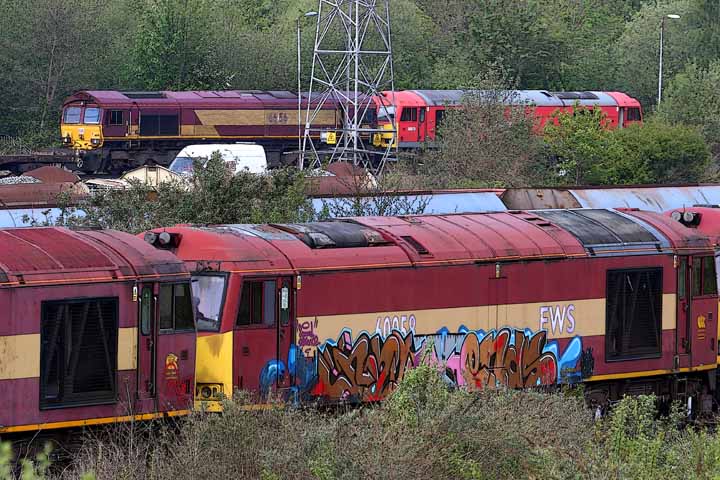 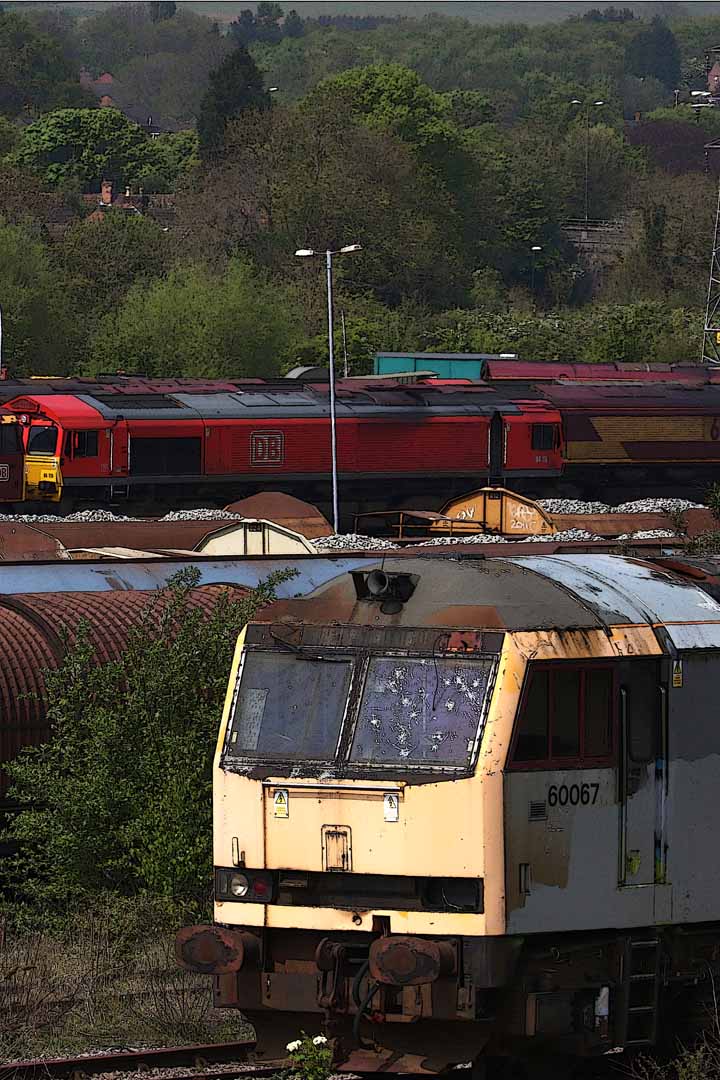 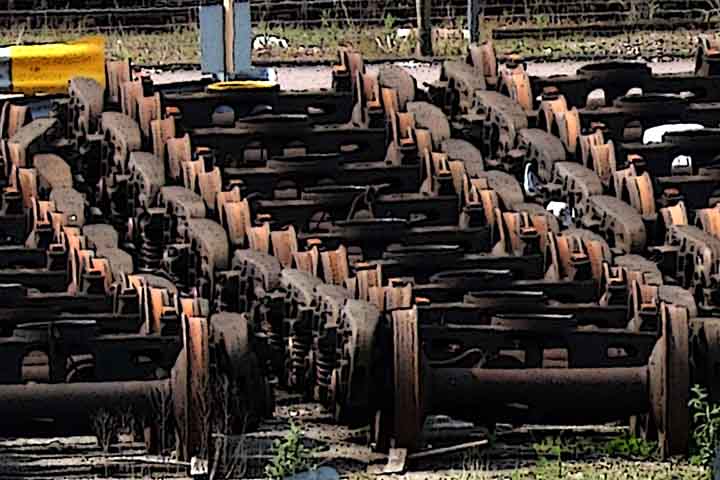 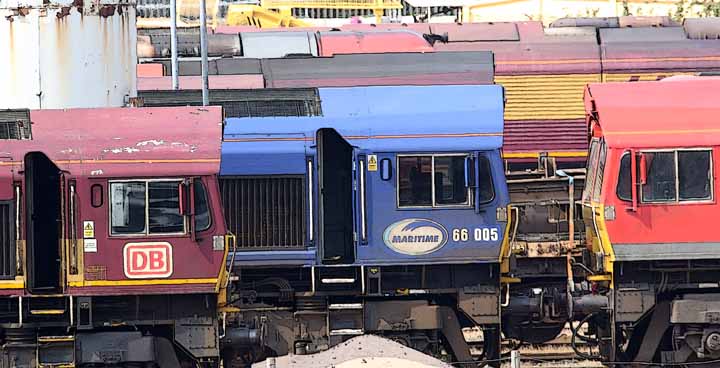 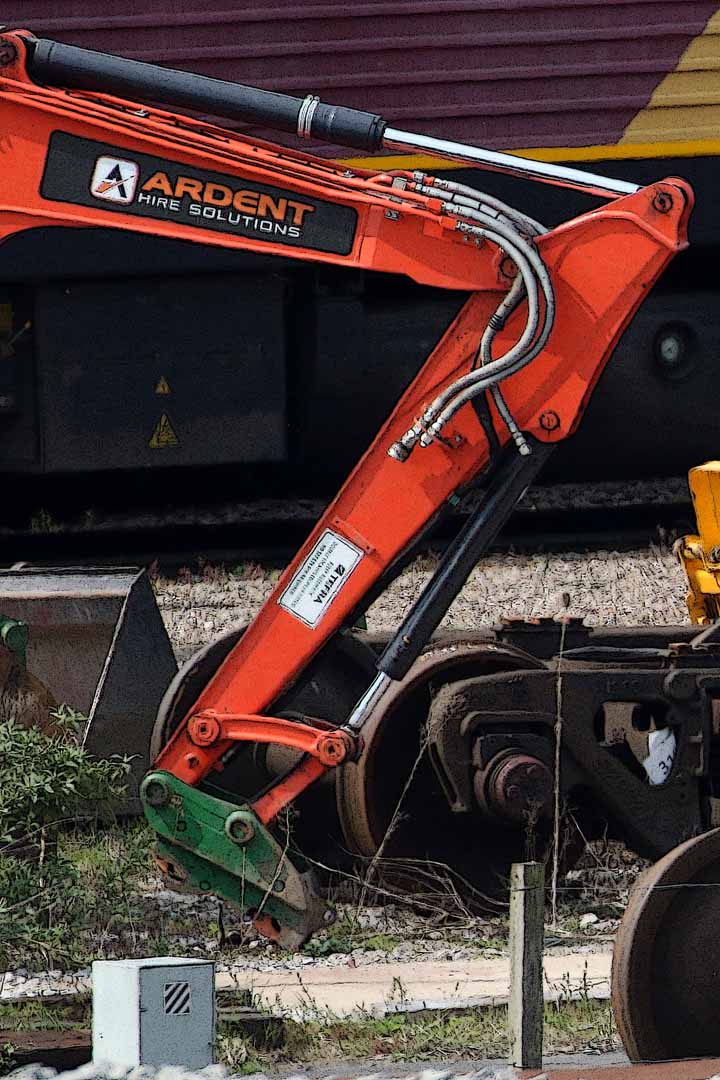 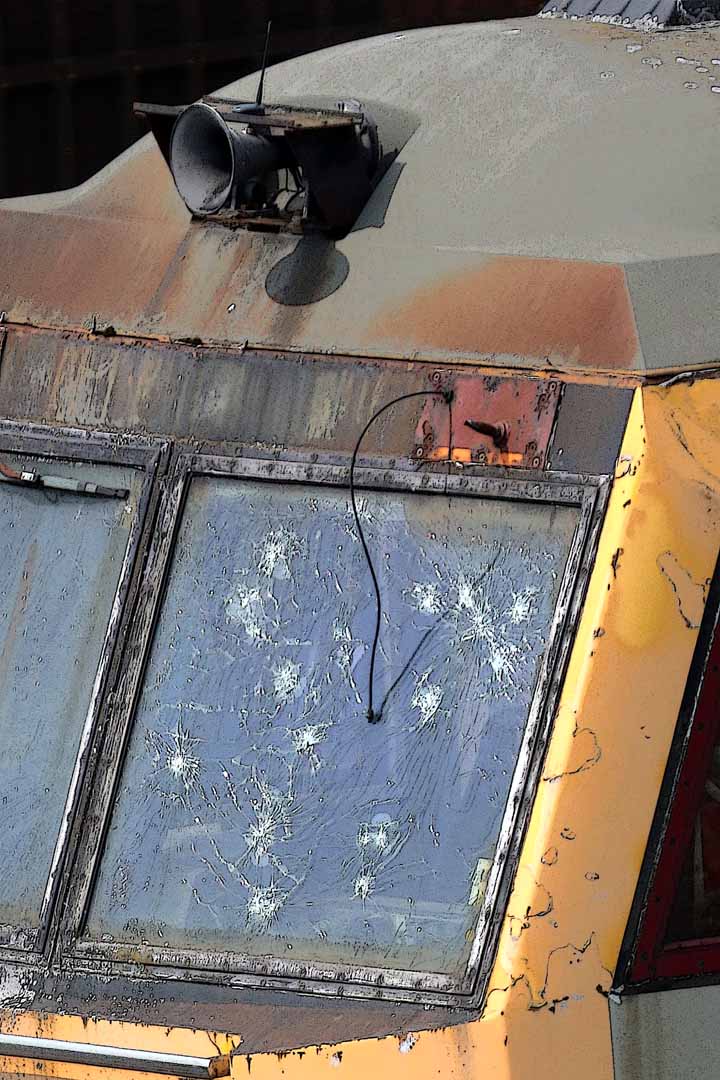 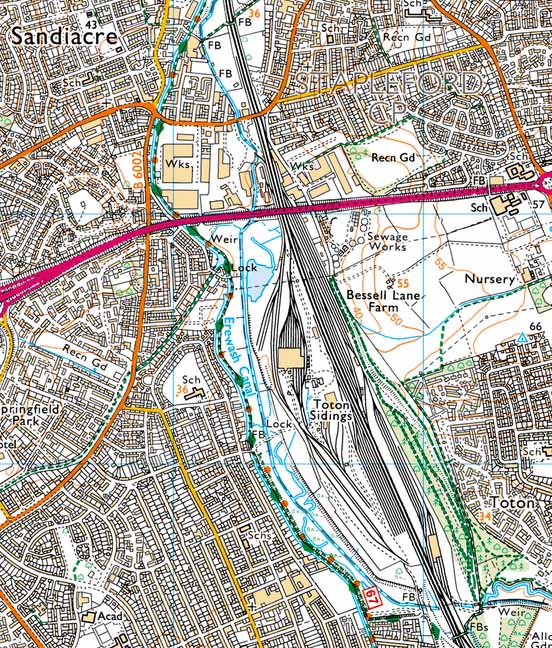 From a bridge, north of the sidings where Sandiacre High Street (the B5010) crosses the railway lines on its way east then sharply north by north east to Stapleford, I snapped these. 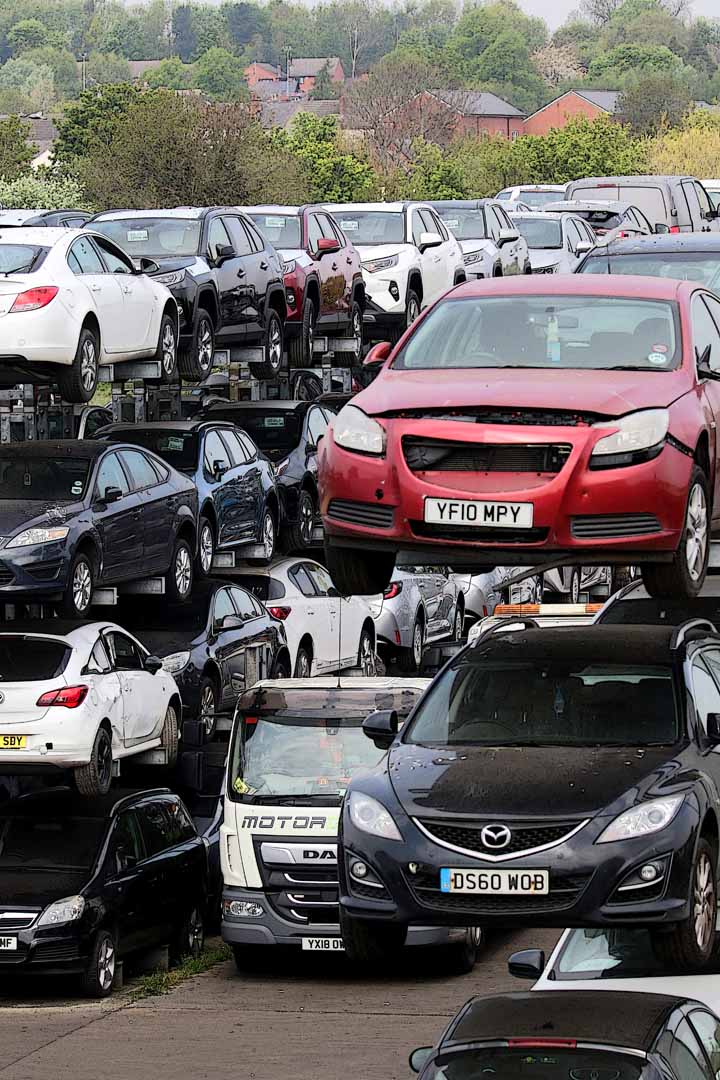 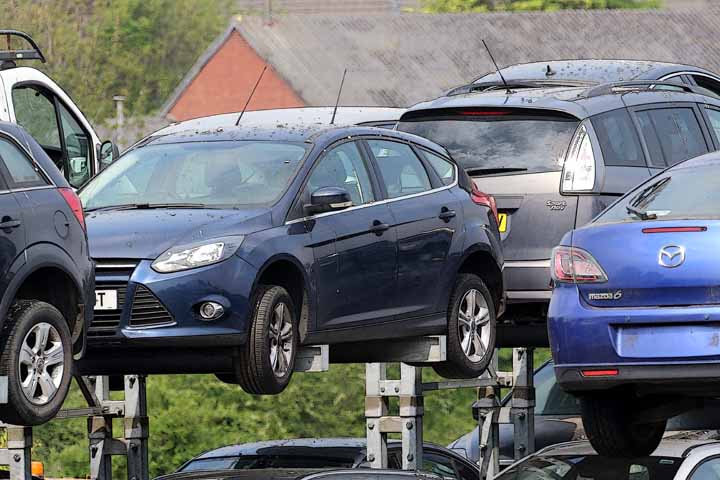 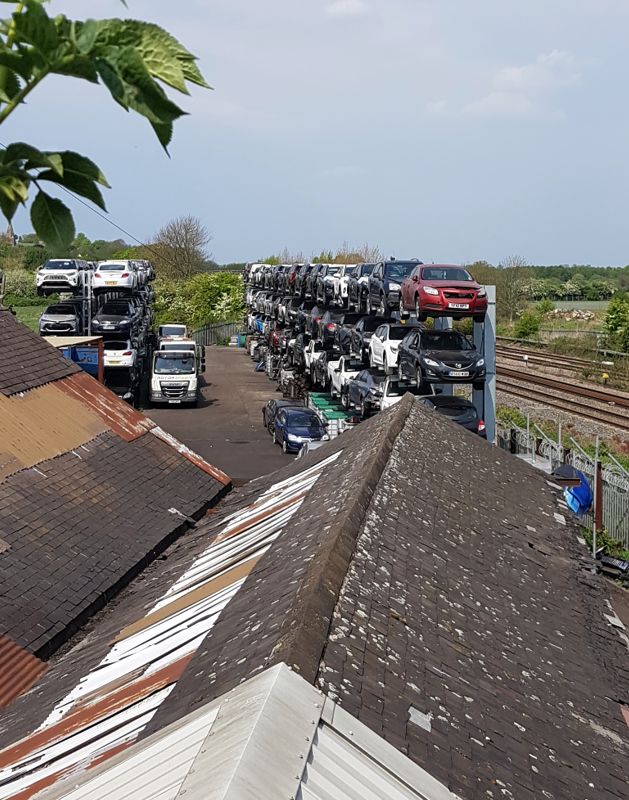 Returning to the car I struck up a conversation with a woman my age, a local who confirmed my guess that safety reasons and that vexatious HS2 had caused a stepping up of security at Toton Sidings. A few lads had been killed over the years, she added. But it was what she offered next, apropos of nothing in particular, that got my attention.

Some twats on a balcony at Springfield Mills in Sandiacre – it’s been converted to flats – had a barbecue on Tuesday. The fire got out of control and gutted most of the top floor. A lot of residents lost everything. They’re being rehoused for now at the Nova Hotel.

She really did say ‘twats’. Twice in fact, which surprised me. Given her age and social class – as indicated by soft diction and use of words like ‘macabre’ – I’d have expected her to eschew the term on ground of its other, more anatomical use. Since I like the word – banned at Steel City House by a feminist resident – for its zap and alliterative ring, I warmed to her.

Not enough to detain me though. The other reason she got my attention is that I’d encountered and photographed the place for the first time just one day before the fire in question, featuring it in this image from my highly acclaimed, Walking the Erewash: 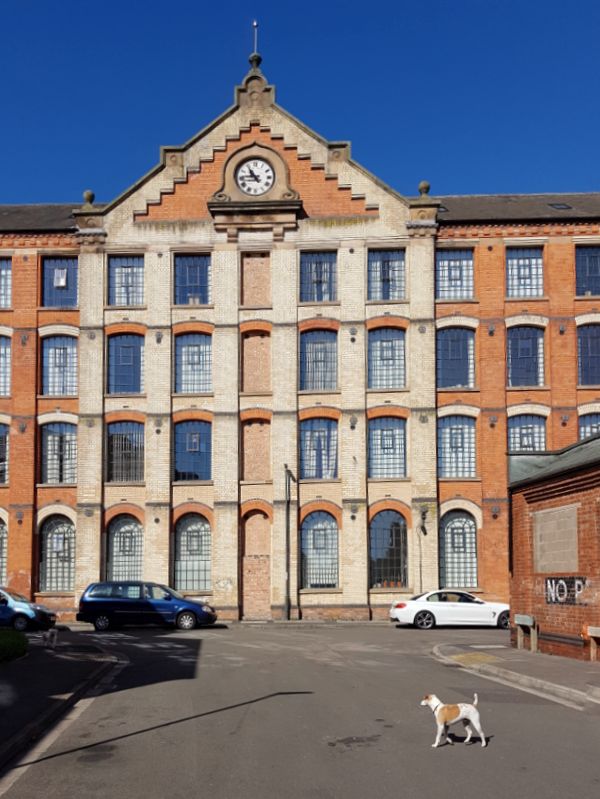 Running out of time I bid my informant hasty adieu and sped to the scene of conflagration. For that Monday image, mill front on blue sky, the phone had been fine. Now I needed my real kit: 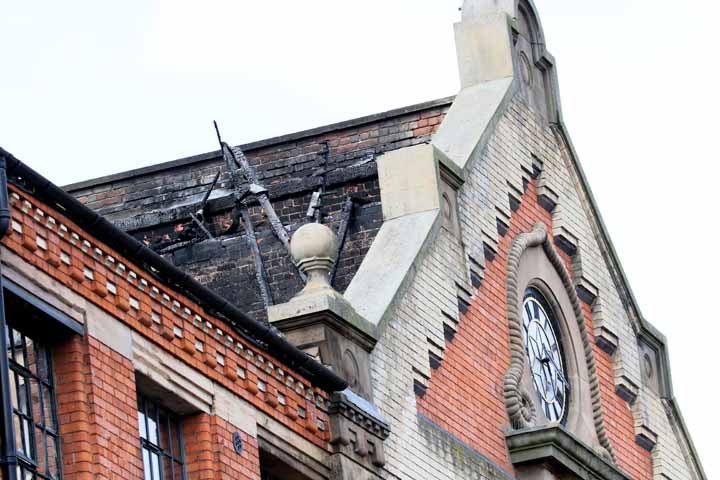 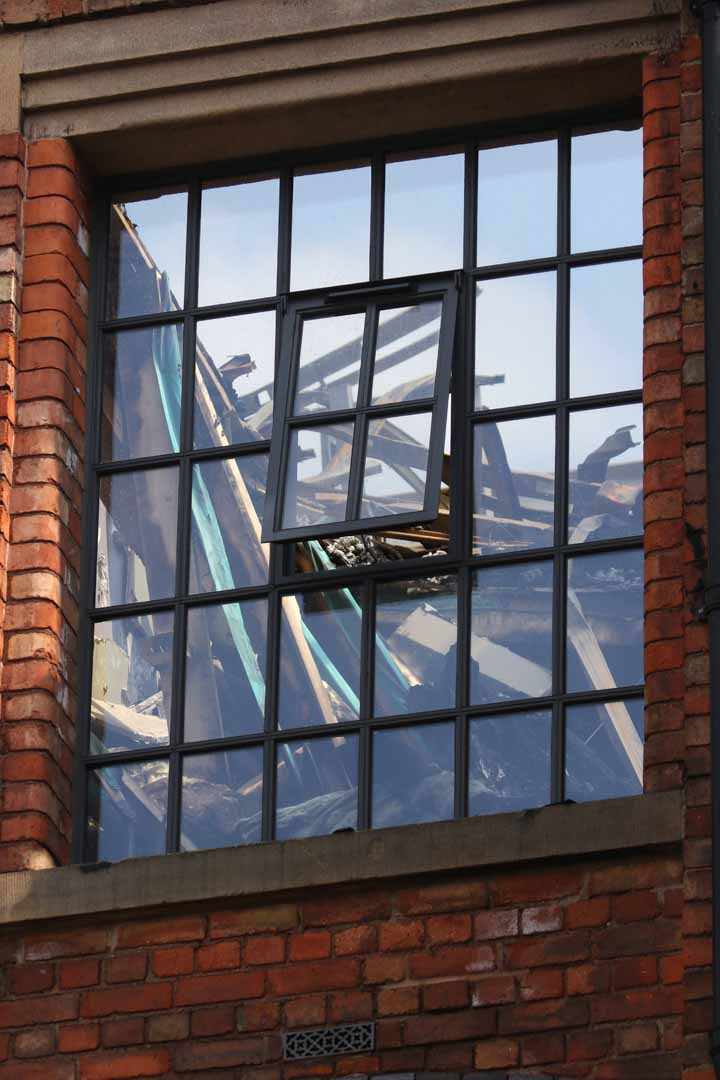 I was moved sufficiently to pen this Ode to a Mill Fire:

Bit of a stretch, that, when no one was killed and my perusals of media reports have failed to corroborate my informant’s attribution of incendiary cause. But that’s poetic licence for you. Do you like my verse? I’m contemplating a short anthology.

2 Replies to “A Toton Sidings Sunday”