I hate to put it so rudely, but if you’re not disgusted, terrified and incandescent in broadly equal measure then you’re either in need of a brain transplant or – more likely – one of the millions of sleep walkers shuffling through life with blinkers on, fingers in ears and singing la-la-la at top of your voice to drown incoming signals that might spoil your breakfast, disturb your meditational practice and generally make your day more of a bummer than you feel is strictly necessary.

I’d be lying if I said otherwise.

“… the US has evidence that China is conducting biological experiments on its soldiers to enhance their capabilities,” said CIA asset and reporter Ken Dilanian on a recent MSNBC segment designed to keep you nice and terrified of the west’s current Official Bad Guy.

“I was somewhat skeptical about this claim, but when I started poking around I found that private American military experts in the think tank world have actually studied this issue and written about it and they have found that there is ample evidence that Chinese scientists are very interested in applying bio-technology to the battlefield,” Dilanian continued. “Picture super strong commandos who can operate on three hours’ sleep, or a sniper who can see twice as far as a normal person. This is the kind of thing that the Chinese aspire to doing, and you know, it’s problematic because in the west we consider that to be unethical, to tamper with the genes of healthy people.” 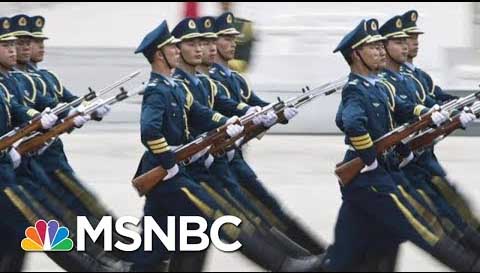 Allow me to draw out what I see as the key points. I ask those not sleepwalking in the manner set out above to forgive any important omissions.

One – check out the link Caity provides – to an Intercept piece by Ken Silverstein – to back up her depiction of Ken Dilanian as a CIA asset. Here’s a taster:

Email exchanges between CIA public affairs officers and Ken Dilanian, now an Associated Press intelligence reporter who previously covered the CIA for the Times, show [his] collaborative relationship with the agency [even submitting] entire story drafts for review prior to publication. In at least one instance, CIA reaction appears to have led to significant changes …

“I’m working on a story [on] drone strikes that can present a good opportunity for you guys,” Dilanian wrote in one email to a CIA press officer, explaining that what he intended to report would be “reassuring to the public” … In another, after a series of back-and-forth emails about a pending story on CIA operations in Yemen, he sent a full draft of an unpublished report along with the subject line, “does this look better?”

You know what I keep saying. That the manufacture of opinion makes a mockery of democracy, since democracy presupposes informed consent. Do you think Dilanian’s just a bad apple in an otherwise wholesome barrel?

The media are big businesses selling privileged audiences to other big businesses. What pictures of the world would a rational person expect from this arrangement?

Two – in the quote cited directly by Caity, Dilanian offers this from the ABC of phony empathy:

I was somewhat skeptical about this claim, but when I started poking around I found that private American military experts in the think tank world have actually studied this issue and … found ample evidence that Chinese scientists are very interested in applying bio-technology to the battlefield.

It’s the first eight words – from “I was” to “but” – that matter. They are a variant on a tried and tested weapon from the persuasion arsenal. Salesmen and proselytisers use it all the time. I call it the Smirnoff move1 on account of its driving engine – “I used to think that … but then …”

I know what you’re thinking! I used to think that too but then I looked into the matter and found to my surprise that, yes, Heineken really does refresh the parts other lagers can’t. Jesus really did save me and he wants to do the same for you. Washington truly seeks only to protect Americans and give peace a chance.

Three – note the damning array of proofs assembled by Dilanian:

… when I started poking around I found that private American military experts in the think tank world have actually studied this issue and … found ample evidence that Chinese scientists are very interested in applying bio-technology to the battlefield.

It falls to pedants like me to point out – for that handful of the millions of sleepwalkers most at risk of actually waking up – that “we have evidence” is not evidence.

Four – try if you will to apply a scintilla of scepticism – the real kind – to this claim, again from the quote directly cited by Caity:

Picture super strong commandos who can operate on three hours’ sleep, or a sniper who can see twice as far as a normal person. This is the kind of thing that the Chinese aspire to doing, and … it’s problematic because in the west we [think it] unethical to tamper with the genes of healthy people.”

Are you up for this week’s homework? Set aside if you can a lifetime of brainwashing on the essential goodness of America, and essential vileness of whatever and whomever its current bêtes noires – invariably obstacles, direct or indirect, to Wall Street bottom lines – happen to be. Focus for once on the historic record. Which country has used nuclear weapons? Which one wages illegal wars and says, in effect, “fuck you, we’re an empire”? Which can kill half a million Iraqi children without a shot being fired, and call it a price worth paying? Which uses depleted uranium and white phosphorus to further its asset raids on militarily weaker nations?

Which one has global brand newspapers that can employ the likes of Mr Dilanian, yet have the sheer effrontery to point a scornful finger at “unfree” countries’ use of, gasp, propaganda?

And when you’re through with those exercises, ask yourself one last question. How likely is it that China is developing some new super weapon which Washington – for ethical reasons! – eschews? Assuming there’s any truth at all to this claim about China – and why wouldn’t there be, given Beijing’s very real fears of the world’s greatest military power making a pre-emptive strike – isn’t it more likely that here as in other areas Washington, Wall Street and come to that Silicon Valley are finding themselves in the unfamiliar role of playing catch-up?

And in the meantime crying, “foul play”.