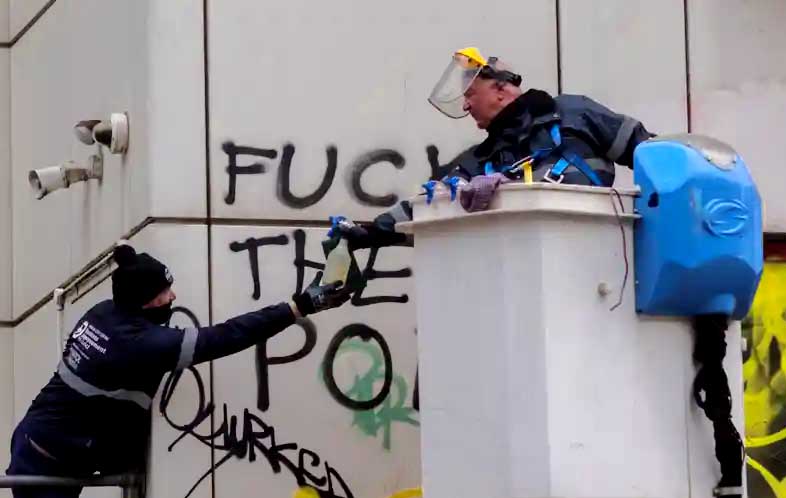 The first-past-the-post system doesn’t work. Our only form of democracy left is protest. And now they’re trying to take that away. Deri Smith, aged 22.

Let’s start with the Police, Crime Sentencing and Courts Bill. I referred to this a few days ago, citing and summarising a good WSWS piece1 as follows:

That post notes Labour’s dithering over the Bill. Only now, with passage onto the statute books a foregone conclusion – and events at Clapham Common having stirred the kind of widespread unease even Keir Starmer’s eviscerated party could not be seen to ignore – does it offer token resistance. In a moment we’ll see a small but telling sign of Labour’s cowardice (or worse). For now, here’s Jonathan Pie in six minutes of characteristically high octane musing on what the Bill has in store for us.

That was a week ago, on March 17. By the night of March 21, images and video beamed across the world’s screens were showing peaceful protest, over this power grab in the making, morph into one of the most violent riots Bristol – no stranger to civil disobedience – has seen.

Must we be swivel-eyed conspiracy theorists2 to marvel at the timing? How neatly it serves as demonstration of the need for precisely such a thing as a Police, Crime, Sentencing and Courts Act!!! The convenience for TPTB can hardly – swivel-eyed coincidence theorists excepted – be ignored.

With that in mind, here’s a far from swivel-eyed Dan Astin-Gregory, a man who, incidentally, has made a name for himself at the sane end of lockdown opposition. Now we see him pacing the streets around New Bridewell police station, the morning after, with a few hard questions.

Let me close with that “small but telling sign of Labour’s cowardice”. Here’s Labour’s Shadow Education Minister, Toby Perkins. Having come out in support of the police response at Bristol on Sunday night, he then had cold feet. This we’re used to. For want of principled opposition to the dismantling of Britain’s welfare state, and ‘our’ venal wars on the global south, Labour has a constantly nervous eye on the public mood – a thing highly manipulable – as flagged by focus groups and the politics of identity.

So the MP for Chesterfield had second thoughts, or his boss had them for him, leading him to rub out the boot prints. Sadly for Mr Perkins, the likes of Politwoops excel at reversing such acts of crime scene clearance, putting the evidence right back where it belongs.

In the public domain. They work (it is alleged) for us you know! 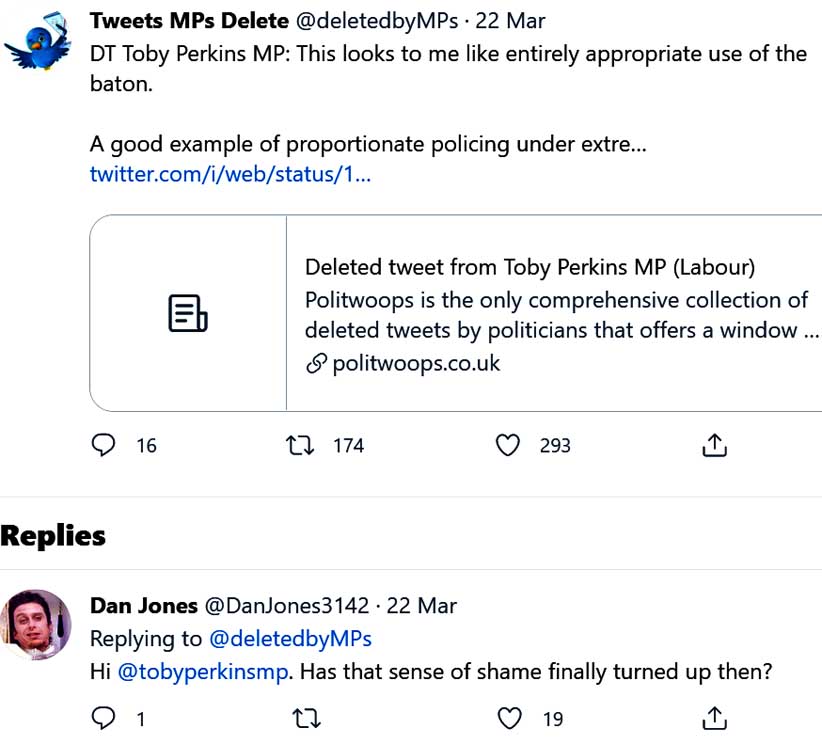 12 Replies to “Cui bono? – notes on the Bristol riots”