My previous post, on Roderic Day’s 7,000 word response to allegations of China’s persecution of its Muslim Uighur population, contains the following:

Polling of Chinese citizenry by Dalia Research reveals that “73% of Chinese consider China to be democratic whereas only 49% of Americans believe the same about the U.S.”

Harvard’s Ash Center concludes after a landmark 13-year study that “Chinese citizen satisfaction with the government has increased virtually across the board”.  Blackbox Research and Toluna find “China gets top score as citizens rank their governments’ response to the coronavirus outbreak”.

Eurasia Group Foundation finds “28% of Chinese respondents reported an unfavourable view of the US, up from 17% a year earlier, while the number reporting a favourable view fell to 39% from 58%,” and NYU professor Philip Alston writes, in his final report on global poverty as UN Special Rapporteur, in a section on “China’s outsized contribution”:

Much of the progress reflected under the [World] Bank’s line is due not to any global trend but to exceptional developments in China, where the number of people below the International Poverty Line dropped from more than 750 million to 10 million between 1990 and 2015, accounting for a large proportion of the billion people ‘lifted’ out of poverty during that period. This is even starker under higher poverty lines. Without China, the global headcount under a $2.50 line barely changed between 1990 and 2010. And without East Asia and the Pacific, it would have increased from 2.02 billion to 2.68 billion between 1990 and 2015 under a $5.50 line.

The links in the above passage are conversions, for easier checking, of footnotes in Day’s piece. I urge you to do so. The notion of a Chinese people suffering under the rule of a tyrannical CCP in a police state forms a huge part of our media induced sense of superiority in the West. Just the other day, Guardian columnist Simon Tisdall informed us that:

China’s surly leader looks like a man prone to brooding. He has suffered many slights at the hands of the west, including accusations of genocide in Xinjiang, brutality in Hong Kong, and aggression in the seas around China. What drives him now as his forces besiege Taiwan? 1

One answer is that Xi may also hope to divert attention from domestic problems. Maybe he faces unseen challenges within China’s communist party.

Tisdall I see as a cold warrior to rival liar Luke Harding. He neglects to supply details of those alleged domestic problems, and how they might undermine the somewhat more factual claims by Roderic Day. As for “unseen challenges within China’s communist party”, the only word that counts with me is unseen. Like the description of Xi Jinping as “surly” – following as it does an opening paragraph which has him and Vladimir Putin as “ageing thugs” – it exemplifies a have-your-cake-and-eat-it smear style I’ve come to loathe in the Guardian.2 As does that “looks like”.

Tisdall needn’t offer solidly informed opinion. He need only leverage the prejudices of readers nurtured cradle to grave on the idea of Western nations as at the spearhead of civilisation, a role entitling those most heavily armed to act as global gendarmes. Slavery? Colonial plunder? Internecine rivalries twice boiling over into world war? The first two, we are told, were halted by the march of civilised values.3 The third entered the victors’ mythology – t’was ever thus – as freedom going head to head with tyranny.

Modern imperialism, the north-south export of monopoly capital and south-north repatriation of profits, does not register in the average Western mind. Drenched in an ideology of moral and political superiority – not just the opinion manufacturers of market-driven news media but of the education and entertainment industries too – we in the West may be prey to all manner of doubts and fears, but of this we are convinced: our freedoms are not only superior to those of all other nations, they have nothing to do with an affluence which in turn has nothing to do with ‘our’ ongoing exploitation of the ‘developing world’.

We are better than Them simply because We made better choices. No need to beat about the bush. We are the good guys. 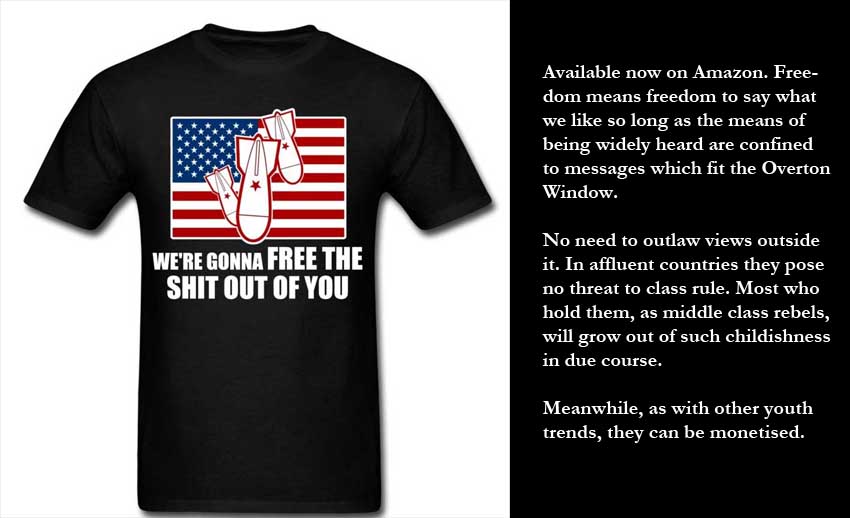 I was gratified to read a fair amount of intelligent pushback at Simon Tisdall. This for instance by StrongMachine:

Please stop trying to start a war, Simon. Haven’t we been through enough recently?

And when Franciscat offered as incontestable fact that ….

We all know China has little care for its own people.

“We all know China has little care for its own people.”
Compared to where? How many Chinese citizens are unable to get health care? How many live in tents and cardboard boxes in cities? How many beg on the streets? How many murders take place in China every year?

When the Uighurs made their inevitable appearance, a tongue in cheek Blissex noted that:

the number of uyghurs has tripled in a few decades (much more than that according to uyghur “freedom fighters”), their current rate of growth is 1.8% per year as like other minorities they are exempt from one/two child policies. Just imagine how vicious that genocide must be.

It’s these next two, however, which really take us to the heart of the matter:

Klytie – if the electorate want to get rid of Boris, he’s gone, if you want to criticise him you won’t end up in jail. Try that with Putin or Xi? We need to recognise and cherish what we’ve got.

But I’m writing not to Zoorro, Klytie or Franciscat. I don’t suppose anything I offer could cause them to pause, to take stock of just how – through which channels – they came to be so sure of themselves. I’m writing for those willing to re-examine old certainties, political givens within the Overton Window. For those willing to ask how solidly informed views – hence meaningful democracy – could possibly ensue when our sources of information are for various reasons as unreliable ….

Such people may want to know – in a little more detail than the crude caricatures of our media allow – how the governance of this rising superpower actually works. Hosted by ICH, this 3500 worder asks: How Democratic is China?