With the world’s eyes on Afghanistan, it’s been easy to overlook the slippage of US authority in its own Latin American backyard. Here’s how a UN vote this July, to end the vicious blockade of Cuba, panned out. 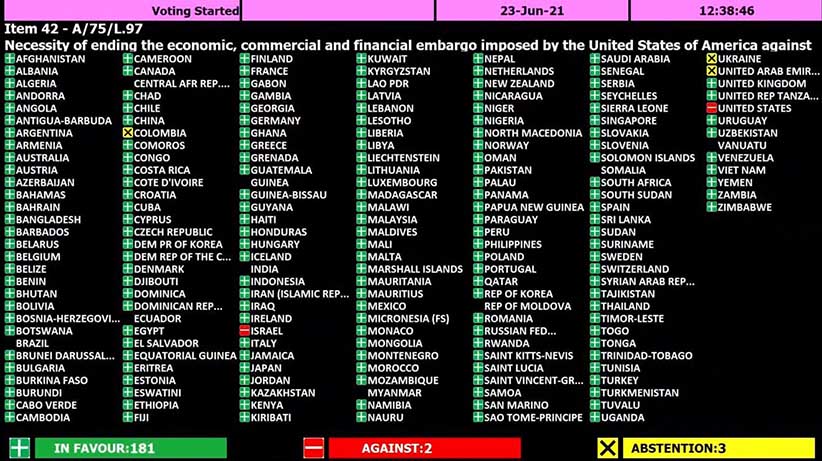 In itself this is no big deal. But it’s not happening in isolation. Monthly Review, in a simple but useful piece on the wider issues now playing out, sets a bigger context:

The US has suffered a significant defeat in Afghanistan, weakening its position in central Asia. A second region where the US is engaged in a serious foreign policy struggle is in Latin America, where there has been a new rise of forces pursuing a path of national independence instead of subordination to the US. The immediate focus in this struggle has become the US economic attack on Cuba. But because, on Cuba, the US is going against the positions of the overwhelming majority of countries in the world, against the great majority of the Cuban people, and in violation of the USA’s own declared goals in terms of the global order, there is serious risk to the US that it will also suffer a significant foreign policy defeat on this issue. This therefore makes it important to carefully analyse the unfolding of the situation around Cuba.

Read in full at MROnline …

One Reply to “Meanwhile, on Uncle Sam’s doorstep …”