I hate to kick off with a long sentence but today I’ll make an exception. Those who still believe – in defiance both of simple logic and decades of (a) smoothing the way for profit-led carnage in the middle east; (b) occasionally critical but always unconditional backing of apartheid Israel; (c) vilifying all, from Jezza and Julian to Russell Brand, who seek truth and justice; and (d) leading the way, including by active lying, in the dangerous cold war on Russia and now China – that the Guardian stands for humanity and progressive values (as opposed to catering to markets who want these things in selective and watered down forms) should study yesterday’s editorial, The Guardian view on the Aukus defence pact: taking on China.

As jointly announced this week by Biden, Johnson and Australia’s Scott Morrison, three of the Five Eyes have sealed a deal, stiffing France in the process, whereby the USA and UK supply Australia with its first nuclear powered submarines. The Guardian editorial opens, accurately enough, with this:

No one – least of all Beijing – believes the denials. The new defence pact between the US, UK and Australia is unmistakably aimed at containing China. The question is how substantive it will prove to be. The initial project – Canberra’s acquisition of nuclear-powered submarines, with Washington and London’s help – is prompted in part by growing Australian frustration over its troubled contract for French-made vessels. But it opens the way for greater military cooperation and is to be underpinned by wide-ranging collaboration on areas such as cyber-security, artificial intelligence and quantum computing, which China is pursuing intensively.

As I said two days ago before learning of the submarine deal, I welcome the rise of China and see as entirely predictable:

the US-led response to [the] loosening of the Western investor stranglehold on southern economies. That response will be warlike, though couched in humanitarian terms, and may bring us by miscalculation or design to Armageddon

And as I have also said, most recently here, the political economy of corporate media ensures that they side more or less unreservedly – i.e. with enough carps and quibbles to keep enough of us believing there’s independent thinking going on – with that hostile response. To this end, those media will take on the role of keeping us onside as regards the ‘couched in humanitarian terms’ aspect.

Three years ago, Australia’s prime minister insisted Canberra need not choose between Beijing and Washington. Now he seems to have judged that China has made the choice for him, given the punishing trade war, the treatment of Australian citizens, mammoth hikes in military spending (albeit from a lower base than the US) and its broader behaviour. Donald Trump’s presidency gave China an opportunity to strengthen relationships with US allies; the pandemic gave it an opportunity to rebalance towards cooperation. Instead, it accelerated course with Wolf Warrior diplomacy, trade pressure, clashes with India and more frequent incursions into Taiwan’s air defence identification zone, and upped the ante in the South China Sea.

Several things to unpick. First, re that ‘punishing trade war’ it is true that Canberra, revealing its vassal status by acting against the interests of its citizens to please Washington, has bloodied its own nose in economic warfare with Beijing. It is also true that this warfare is part responsible for China’s ban on coal imports from its former main supplier.

I say ‘part responsible’ because China, its carbon footprint large (though smaller, when adjusted per capita, than the West’s) is aiming for carbon neutrality by mid century. Global heating is a threat both to economic progress and the welfare of its citizens in a system where profits are not the unbridled force they are in the West. (This, and the attendant ability to plan long term, is why China’s leap forward has been so rapid – and why we should take that goal of mid century carbon neutrality rather more seriously than we should the Paris Agreement.)

Second, with regard to China’s treatment of Australian citizens, I reiterate my general point that it is necessary, in the West’s almost entirely bogus democracies,1 to sell wars of profit, be they hot or cold, on humanitarian grounds. More specifically, neither Canberra nor The Guardian is in any position to pontificate on the (mis)treatment of Australian citizens …

Third, on those “mammoth hikes in military spending”, I note the parenthesising, as if this were some trifling concession to the pedantic, of that qualifier, albeit from a lower base than the US.

The fact none of these things rates a mention by the Guardian speaks volumes about ‘liberal’ corporate media. Or would do if not for a truth observed by sci-fi author Robert Heinlein …

… especially when corporate media – entertainment sectors included 3 – do the heavy lifting on keeping those prejudices at the centre of any debate on matters non negotiable for those who call the shots. That’s how it works; how rule by and for the few takes the surface form of rule by and for the many – #turkeys4xmas.

Fourth and for now finally – though that single paragraph houses more mendacities than I have time to address – I note the Guardian’s citing of China’s “incursions into Taiwan’s air defence identification zone, and upp[ing] the ante in the South China Sea”. I’ll take these two together.

Both are big issues I intend to address in dedicated posts. This is off the cuff and brief. Taiwan is part of China, recognised as such by the UN. (Hence that laborious formulation, “Taiwan’s air defence identification zone”.) As the tide of WW2 shifted in favour of the Allies, so did China’s war against its feudal rulers and their abject failure to repel the Japanese invader turn in favour of communist forces. As the latter began to overwhelm the Kuomintang, KMT leader Chiang Kai-shek was driven from the mainland. Imposing himself on what was still called Formosa (“the beautiful island” of 17th century Portuguese sailors) he ruled there without mercy 4 – see Green Island; White Terror, written during a visit in 2017, my first of two.

(Chiang saw his routing as a tactical retreat. To his dying day he insisted that all of China would be retaken and reunited. So much for Taiwan as a separate nation!)

As with other parts of Asia, the US changed its tune on Chiang Kai-shek. Initially it loathed him; just as, for similar reasons of colonial rivalry, it had once backed Ho-Chi Minh in Indochina. But cold war imposed new priorities. Chiang was welcomed into the DC fold the way so many other reactionaries with blood on their hands have been. And as with the US genocide on Korea, and Palestine’s Nakba, mid-twentieth century history has been air-brushed so effectively, with help from such as the Guardian, that events still within living memory might as well have occurred in Homer’s day.

So the Guardian may speak, with little fear of reader pushback, of China ‘threatening’ Taiwan. Millions of Westerners, including an intelligentsia kept historically and geographically illiterate while believing itself well informed by ‘quality’ media, will buy it.

And that “upping the ante in the South China Sea”? Given the issue’s sensitivity …

… and the predictably bellicose reaction of the West to China’s threat – not to you or me, but to the elites who most gain from exploiting the global south – then of course Beijing will respond in no uncertain terms. It must be clear by now to anyone with half a working brain that China, like Russia, has had its fill of America’s “rules-based order”.

And we can be sure Beijing will respond, also in no uncertain terms, to yesterday’s news. Who knows? Maybe it will supply Havana with nuclear subs to patrol the international waters of the Mexican Gulf … 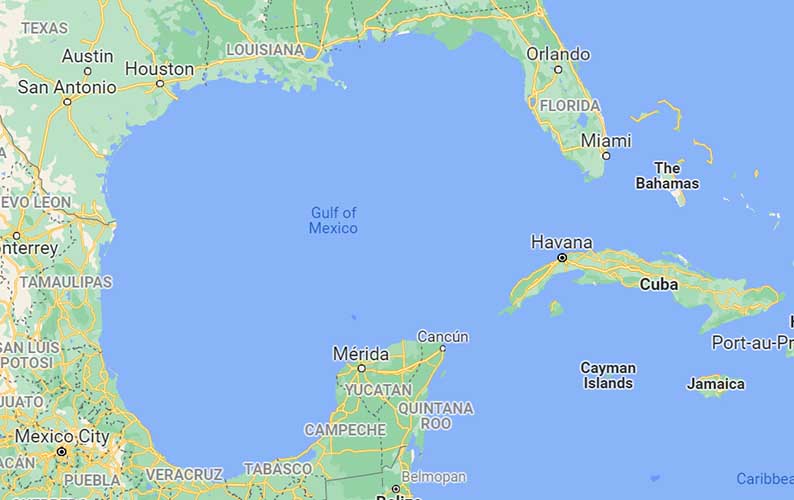 … in the interests of world peace.

3 Replies to “Nuclear subs go down under”