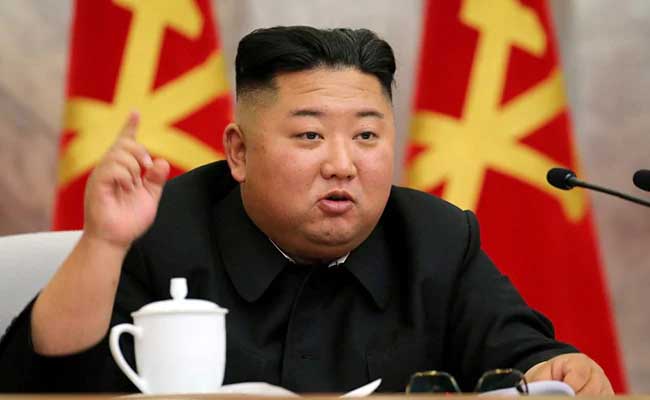 I just did a Google search on genocide north korea. Here are the first six returns. 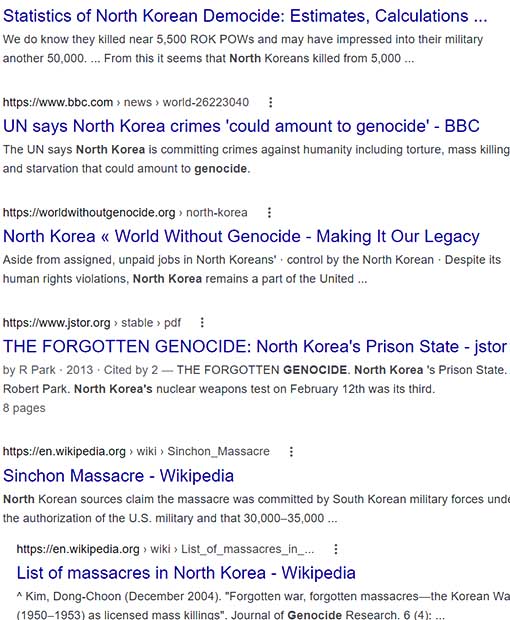 Five refer to acts by the Pyongyang ‘regime’. One (the penultimate) talks of a massacre by the Seoul government, green-lighted by US forces. It is preceded by the qualifier, “North Korean sources claim …”

… which to the average Western mind translates, given the totalitarian nature of the demonising of all things North Korea, as “… so cannot be trusted”.

I say totalitarian because understandings of North Korea as a criminal state run by a dynastic string of Kims – madmen straight from the pages of James Bond – is a core ‘truth’; a sacred tenet or, in secular-speak, an axiom.

An axiomatic understanding all sane and well intentioned folk, whatever their political stripe, are fully signed up for. No matter that what the average Joe and Judy on the street knows of NK – how it came into being, how it sees the West, how it is governed – could be written on the back of a stamp. Everybody ‘knows’ NK is hell on earth, and everybody knows why: that same dynastic string of madmen who, true to the 007 playbook, delight in evil for evil’s sake.

(And since we ‘know’ NK to be a hell on earth, it follows that it seeks global dominance. That’s why it won’t give up its nukes. Not, mind, to avoid the fate of Iraq, Libya and earlier recipients of US displeasure, but because it wants to subject us to its tyrannical rule on pain of our being turned to thermonuclear ashes. Neither logic nor facts – such as that, South Korea 1 excepted, NK threatens no state while the USA is almost permanently at war – come into this. We’re not talking logic. We’re speaking of something far more powerful: the Pavlovian associations the semi conscious and brain-washed mind draws on. If corporate media and political leaders can make it stick that a state is a Hell on Earth for its citizens, linking that charge to the rationally separate one that said state is a Threat To Us All is child’s play.)

It’s not that you’ll be locked up for interrogating the narrative on Pyongyang. You won’t even be sectioned under the Mental Health Act. Most Western governments are too secure to need such vulgar methods. Is that down to 500 years of onwards and upwards progress to Enlightenment Values? Or because our rulers’ exploitation of the global south made them rich enough to leave us sufficiently well fed to accept without serious questioning the surface appearance of rule by and for the many, underpinned by independent media?

Leaving the occasional oddball like yours truly not only an affordable indulgence but, from a certain point of view, a positive asset – living proof of rule by consent in an open society. 2

Whatever. Everybody ‘knows’ all they’re supposed to ‘know’ about North Korea. And if that turns out to be next to nothing, well, that’s all to the good. You didn’t think ‘our’ media was there to keep us informed about the world, did you? How could that be, given the business model succinctly set out by Noam Chomsky?

Thus, below a recent FB post by BBC History Extra on why Britain wanted nuclear weapons, comments like this are par for the course.

Where am I going with this? I’m not; I’m done. All I’ve said was by way of introduction to a 1700 worder by Matthew John in The Medium, March 2018. It covers an indisputable genocide in Korea; one which, oddly enough, is not among those first six returns. Nor – check it out using the same search string – the screeds of returns that follow.3

It’s Not Genocide When We Do It

Amnesia and denial in the North Korea narrative

Just two months ago, President Trump found himself in an online shouting match with Kim Jong-un regarding whose nuclear button is bigger. A few months before that, Trump threatened to reign down “fire and fury” on Kim’s isolated nation. But this rocky relationship may be changing. The reality TV star-turned American Nightmare recently received on-air criticism from MSNBC anchor Rachel Maddow for his alleged plans to meet with the North Korean leader. Maddow seemed befuddled by the notion of these two hot shots coming together, partly due to an evident lack of preparation, but also because no sitting U.S. president has previously met with a North Korean head of state (although the U.S. has had countless passionate love affairs with other dictators all over the world).

Liberals and conservatives often engage in rigorous debate regarding issues like gun control, abortion, and healthcare. But, over the years, American pundits and politicians have been relatively consistent in their mutual condemnation of the North Korean regime, regardless of which “Kim” is in charge. Folks from all across the mainstream political spectrum have denounced the Democratic People’s Republic of Korea (DPRK) as an evil, vile, irrational, and dangerous nation that wants to nuke the entire world for literally no reason. There’s even a slap-stick comedy about assassinating Kim Jong-un, brought to you by some of the most lovable chucklefucks in Hollywood. In the Land of the Free®, we don’t all agree on much, but North Korea certainly is the country Americans love to hate.

But the full scope of this rivalry might be a little more nuanced. To better understand modern relations between the U.S. and the DPRK, consider the following metaphor:

Let’s say there’s this unstable, narcissistic man with a history of violence and domestic abuse. This man also happens to be an alcoholic who collects firearms. Let’s call him Sam, and let’s say he has more fire power than the under-funded local police department, so he and his band of goons are effectively above the law.

Sam is a tall and handsome man with a rugged, weathered face, a five o’clock shadow, and silver streaks in his wavy, flowing hair, and he’s constantly sweating. But not from hard work or exercise. This avid perspiration is a result of poor dietary habits and paranoia. Sam’s newfound power has gotten to his head, and now he’s roaming around with a few glocks, checking up on other folks in the neighborhood — sometimes even spying on them.

Across the street lives a man named Joe, who also happens to collect weapons (although he never amasses anywhere near the quantity that Sam does, and poor Joe later declares bankruptcy after being sucked into a gang-related turf war by Sam, but that’s another story).

One day, Sam sees Joe down the street at the residence of a woman named Karen. Karen is a single mother who lives in a duplex with her six children. Sam just knows they’re up to something fishy, and this stalwart individual doesn’t like it one bit. A few days later, Joe gets word that Karen broke into the neighboring residence in her duplex.

That’s when Sam snaps. He grabs two AR-15s, runs down the street, busts down Karen’s front door, and mows down two of her children in cold blood.

The tragedy was unspeakable, and Karen never fully recovers. Years later, Sam is still a free man, and still patroling the streets of the neighborhood. Eventually, Karen adds steel bars to her windows and doors, and purchases a revolver to protect her family. Regardless of the trauma Karen and her family experienced in the aftermath of the atrocity, Sam continues to occasionally taunt and threaten Karen and her family, insisting she must give up her gun if she wants to be safe.

This metaphor is intended to represent a conquest we love to forget about — the Korean War. Hostilities began in 1950 when the North invaded the South, evolving into a proxy conflict between the U.S. and the Soviet Union until fighting ceased in 1953. The American role was relatively simple: bombing the living fuck out of every square inch of North Korean territory.

As Branko Marcetic of Jacobin explained:

The 635,000 tons of bombs dropped on Korea over three years exceeded the tonnage of explosives during the entire Pacific theater in World War II.

The Korean War proved a fertile testing ground for a variety of sadistic new weaponry, including cluster bombs and nerve gas. There’s even evidence that the U.S. military attempted to use biological warfare.

By the end of hostilities, the U.S. had coated the country with 32,000 tons of napalm.

An Air Force general during the war later casually mentioned that “over a period of three years or so, we killed off — what — 20 percent of the population,” and a former secretary of state said the U.S. bombed “everything that moved in North Korea, every brick standing on top of another.” After witnessing the aftermath of the war, Supreme Court justice William Douglas said, “I had seen the war-battered cities of Europe; but I had not seen devastation until I had seen Korea.”

As with most conflicts, it’s difficult to pinpoint the death toll of the Korean War. Estimates for North Korean deaths range from about 12% to 30% of their total pre-war population. But what is indisputable is that, between 1950 and 1953, the U.S. military unleashed “fire and fury” on North Korea, killing millions of innocent people.

4 Replies to “We need to talk about Kim”