We’ve been on the road an hour, Pappu driving, me riding pillion on his Yamaha. The road, dire as we passed through the industrial estate and nondescript suburbs on the southern outskirts of Bundi, actually improved as we left town behind. Now we’ve pulled into a village for breakfast of samosa in chillhi sauce. It’s delicious, but why the bill for one hundred and thirty rupees: a staggering one pound seventy? Pappu shows me the newspaper wrap enclosing a handful of ganga, brown and gnarled like coarse tobacco, a seed or two here and there like wooden eyes in the Burnham oaks of a children’s book engraving.

I hope he’s OK driving on chillum power. I’m in his hands, and have driven motorbikes stoned too many times in my own reckless past to be judgmental. The rush of air kind of cancels out the dope fug, I told myself then, and so do I tell myself now. I got up to all kinds of stuff back then I wouldn’t necessarily do or approve these days. Though an ardent decriminaliser, one of several problems raised by ending prohibition is ensuring folk don’t drive bikes, cars, road rollers and intercontinental planes stoned out of their boxes. God knows it took long enough for (most) people to get the message on alcohol.

But the ganga’s for Ron. For now we’ll press on to Bimla without aid from Mary Jane, not that I’ll be partaking in any case. The hash and grass I once toked with gusto at any time of day or night hold no appeal now and, even if they did, pulling deep on a chillum – and what’s the point in doing it any other way? – would rip my lungs to plasmic shreds and have me coughing in eye streaming fits for hours.

The next stop’s not even a village. An embankment by otherwise featureless roadside leads down to a single earthen dwelling, with none other in sight on the endless plain, standing in its stockade of packed earth edged by rough woven thorns. There’s just one room, whitewashed with thatched roof. Goats and chickens forage as Pappu parks up and shouts to announce our arrival. A young and beautiful woman emerges, greetings are exchanged. “This lady make good chai”, Pappu tells me. “Before, many people stop here on the road to Udaipur but now – now they build fast interstate highway. Nobody stop any more.” 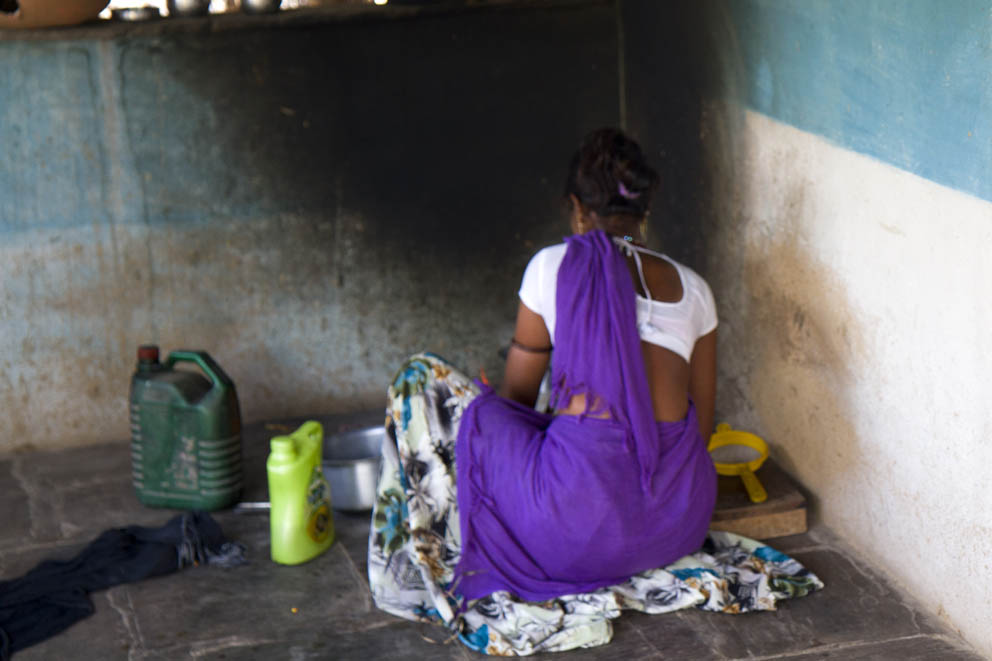 The chai is very much to my taste but then it usually is. I can’t really discriminate, still being more the coffee man. Its maker’s beauty hasn’t escaped my attention though and I remark on it. “Always when I stop, I try to talk with her but she is shy”, Pappu tells me. He has an eye for the ladies, Indian or western. The woman was married, it seems, but her husband has gone; things didn’t work out. This surprises me. “Do many country women get divorces?” Pappu tells me it’s customary to reach such agreements early on, after a few months, where there’s no affection and no children are involved. Presumably there was no dowry payment, or none so substantial as to have been a sticking point, though I note she is alone rather than returned to her family. Watching her prepare and serve the chai I try to imagine her life, this pretty woman in the back of a to me unfathomable beyond. I give up. It’s too big a stretch. 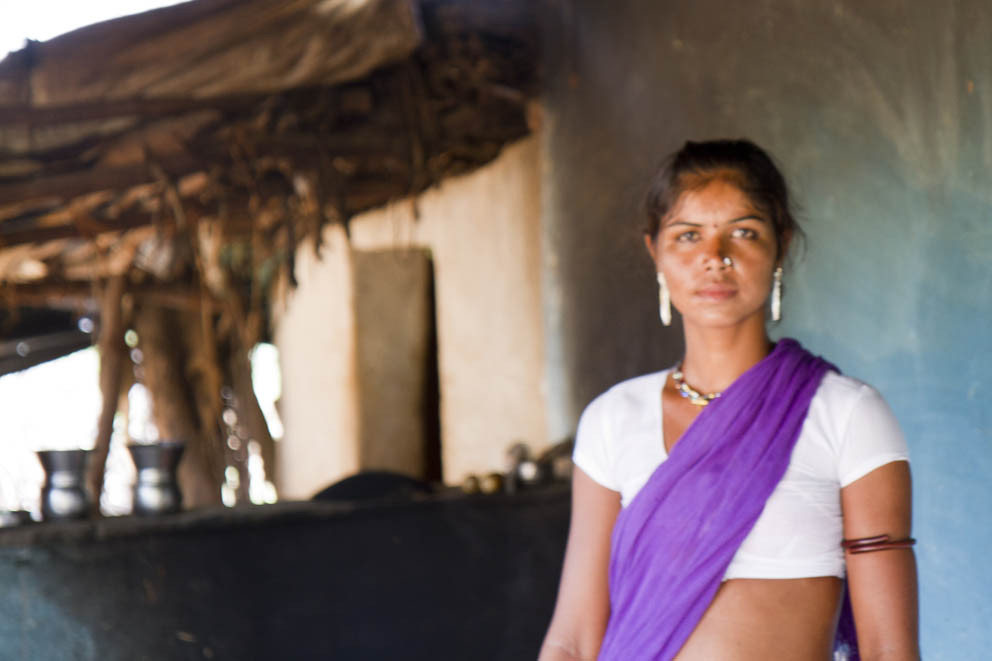 We’re at the waterfall in half an hour, little in the scenery or lie of the land – rock slab outcrop and hard earth, albeit studded with grassland, shrub and leafy tree – having prepared me for the ground suddenly opening up as it now does to show a sparkling brook weaving in multiple courses over a flatland of sandstone slab to quicken its pace – inexplicably, had I not known in advance of the fall I still cannot hear – ahead. A white egret flies low above the water, coming to rest on a bush. I’ve already spied a kingfisher on a rock overlooking the current and now, as we park in this idyllic spot, I note silvery flashes as fish twist and turn in the stream; a metallic glint of sunlight on scale that has captivated me since infancy. And still the fall, its nearness betrayed by an abrupt cessation, fifty metres ahead, of trees, stream and ground itself, keeps its silence. Am I in for letdown? Have we come all this way for some sluggish trickle, the last drips of a rusting tap after the water supply’s been disconnected? 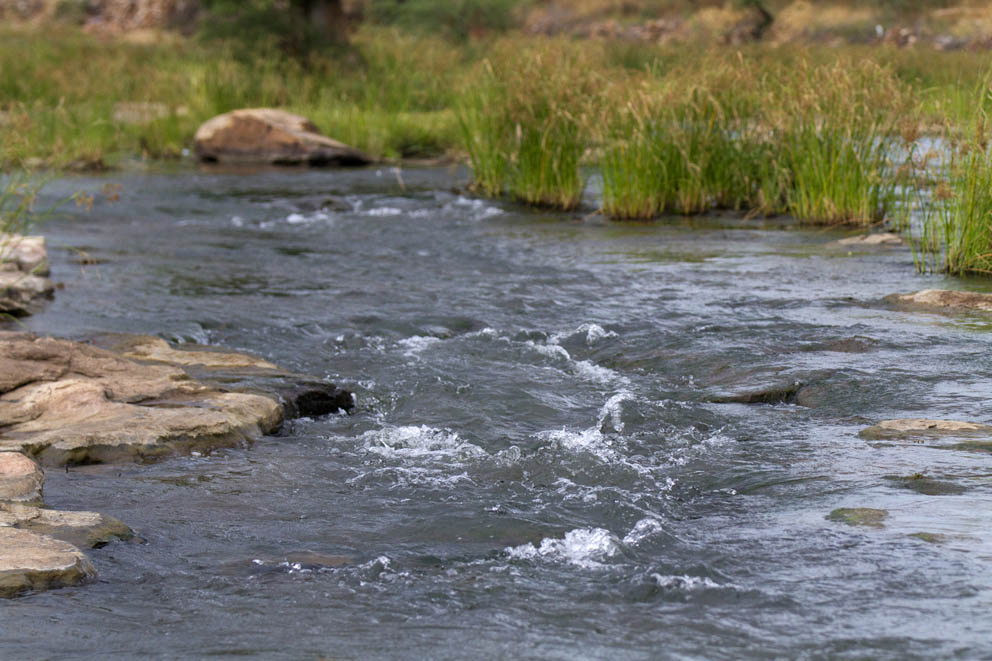 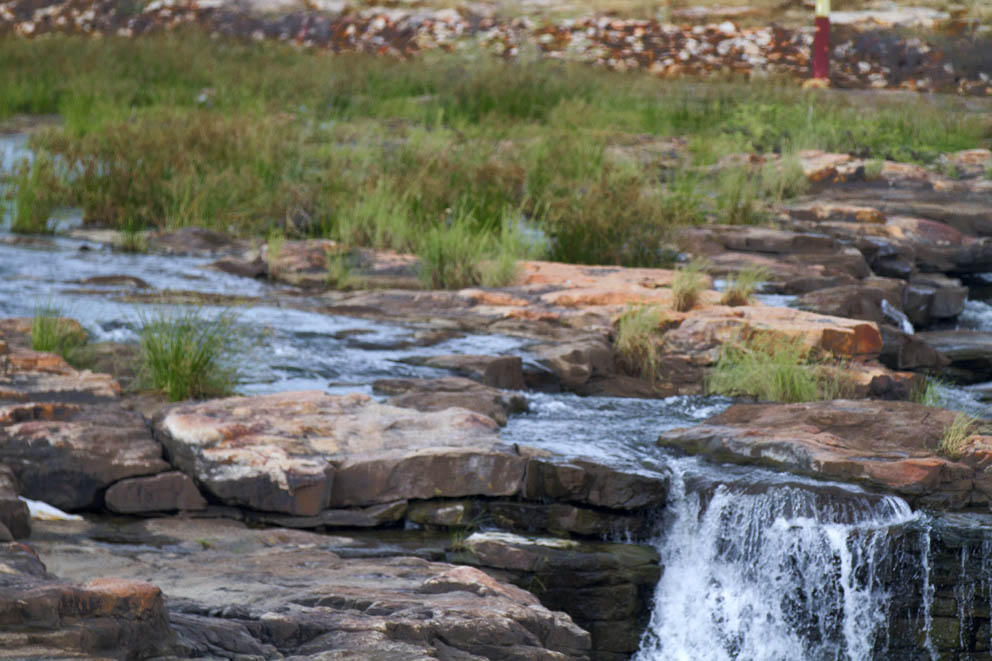 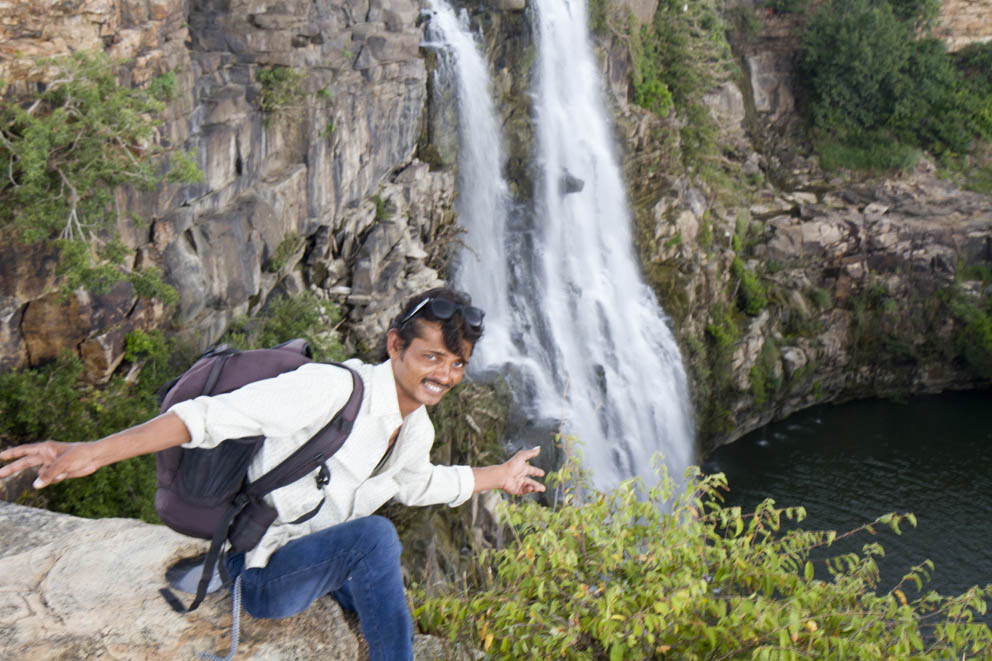 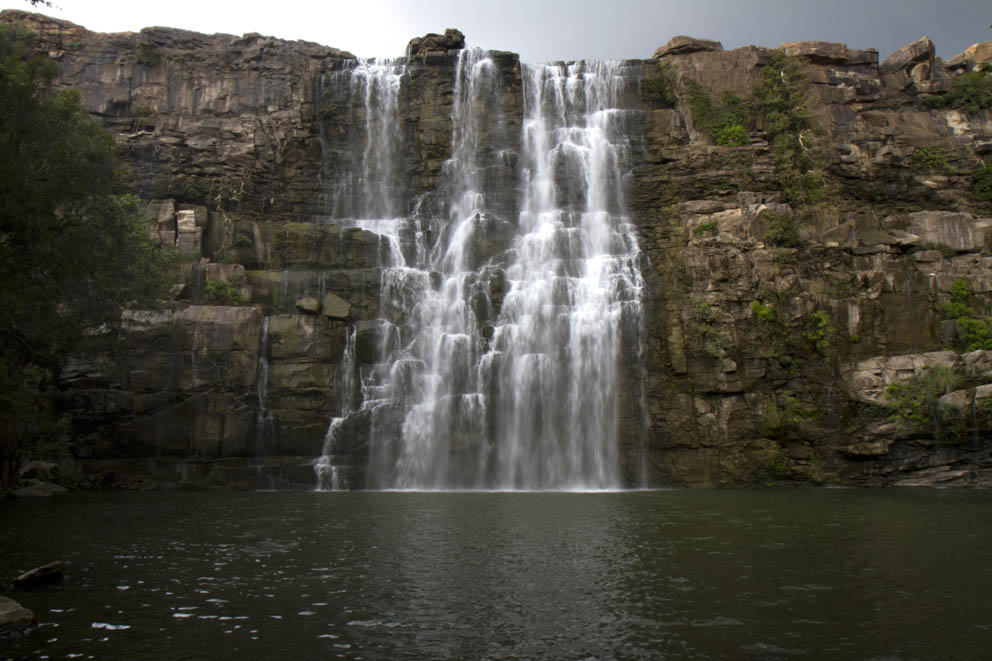 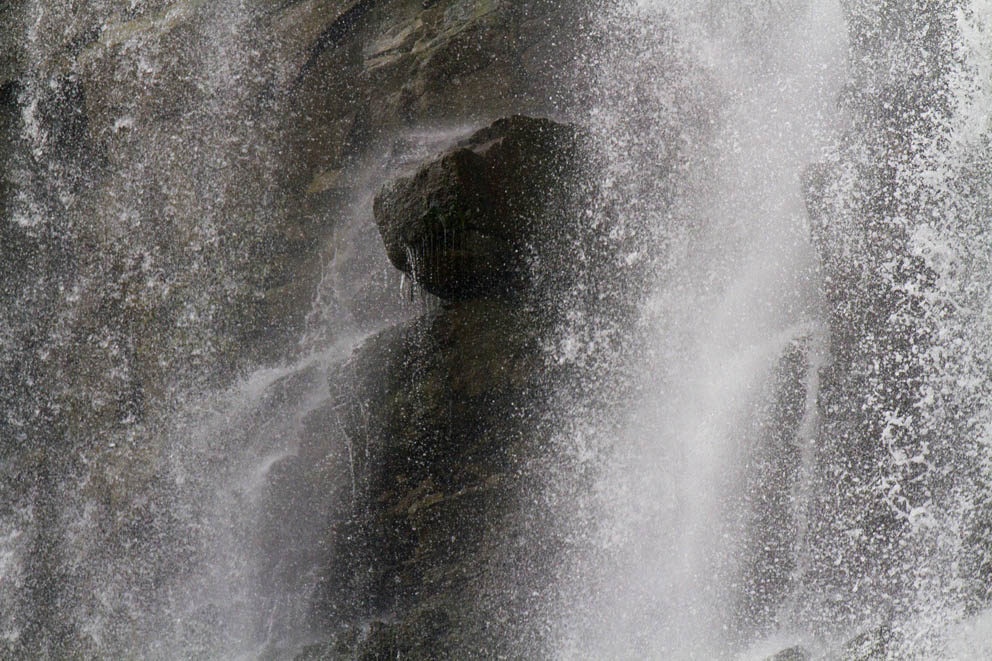 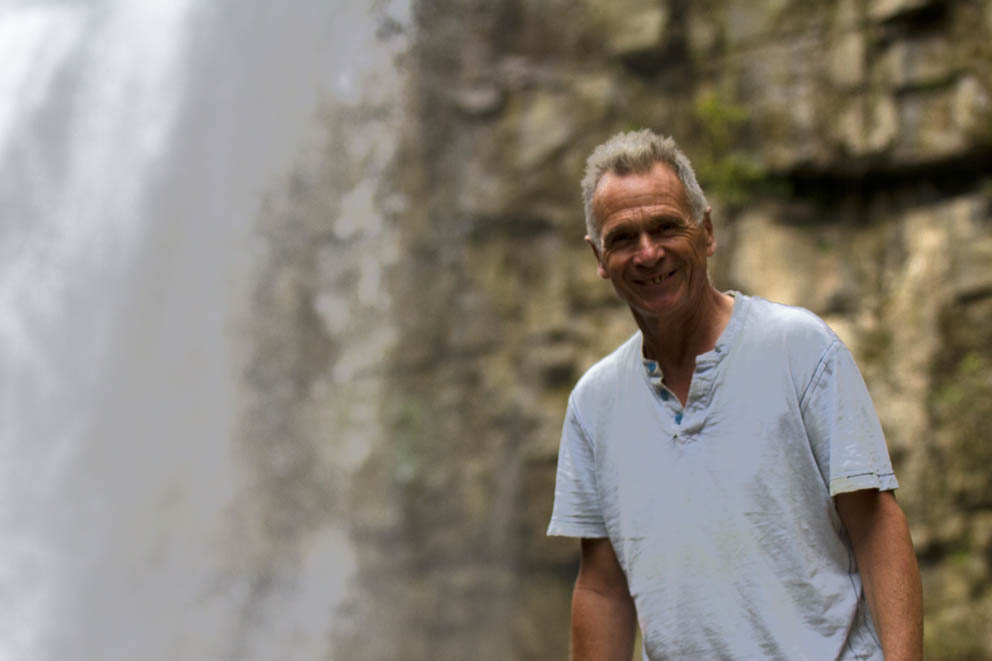 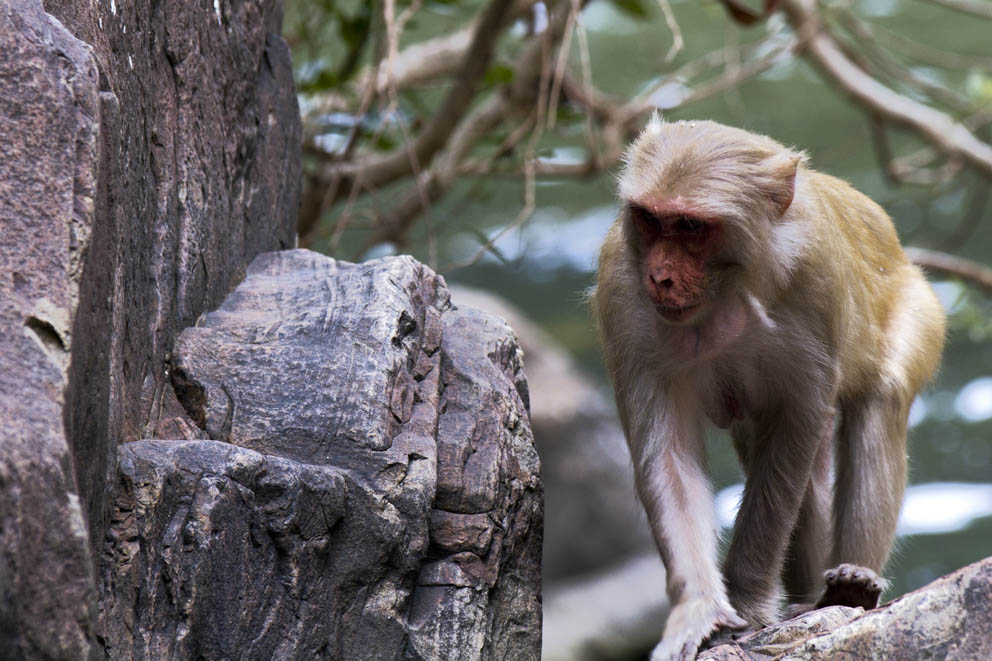 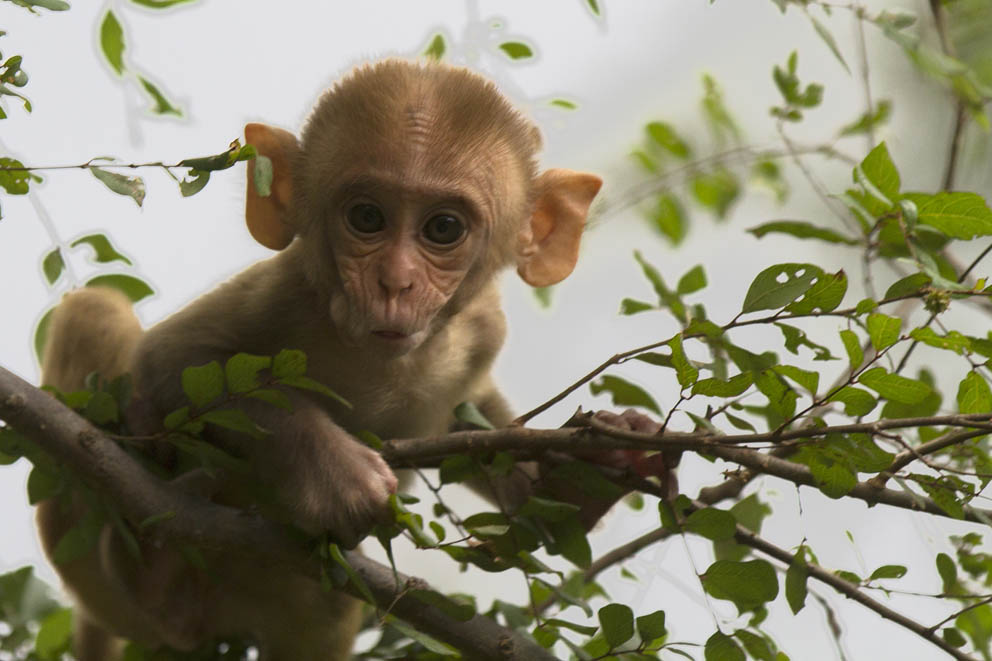 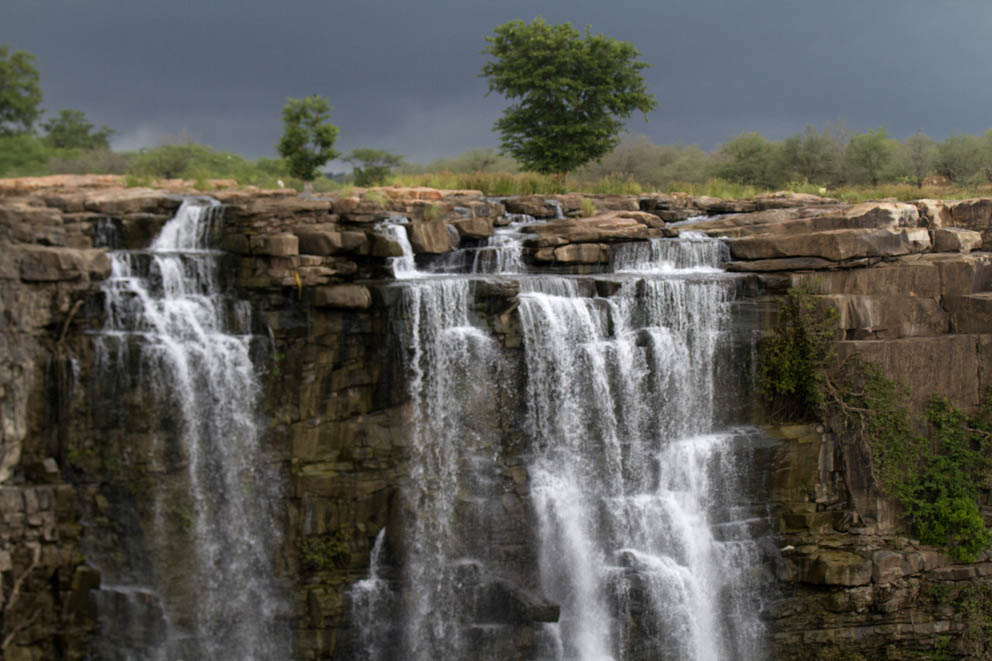 Two kilometres along the road home we stop at another back of beyond dwelling. This is not earthen but built around a frame utilising a gnarled living tree, posts driven into the sun-baked earth as secondary supports. Lighter brushwood and scrub are woven across and through this infrastructure, the whole covered in the one construction material for which money – or goods or services – will have been tendered; black industrial polythene to keep out rains now more or less over. Here a farmer and his wife live with two teenage and as yet unmarried girls. There is a son too, Pappu tells me, but he is in Jaipur working. 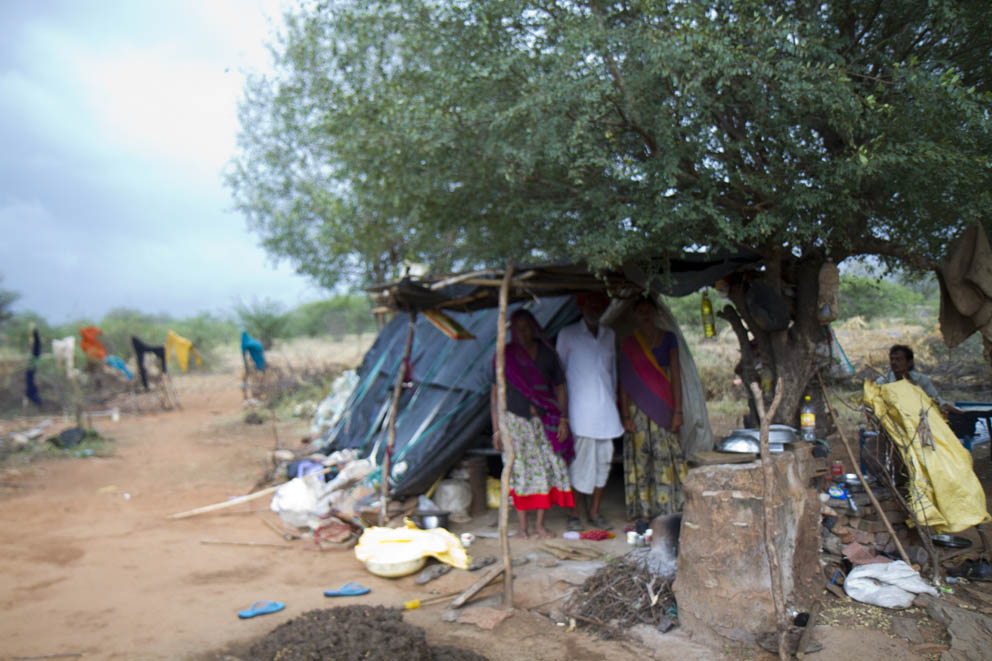 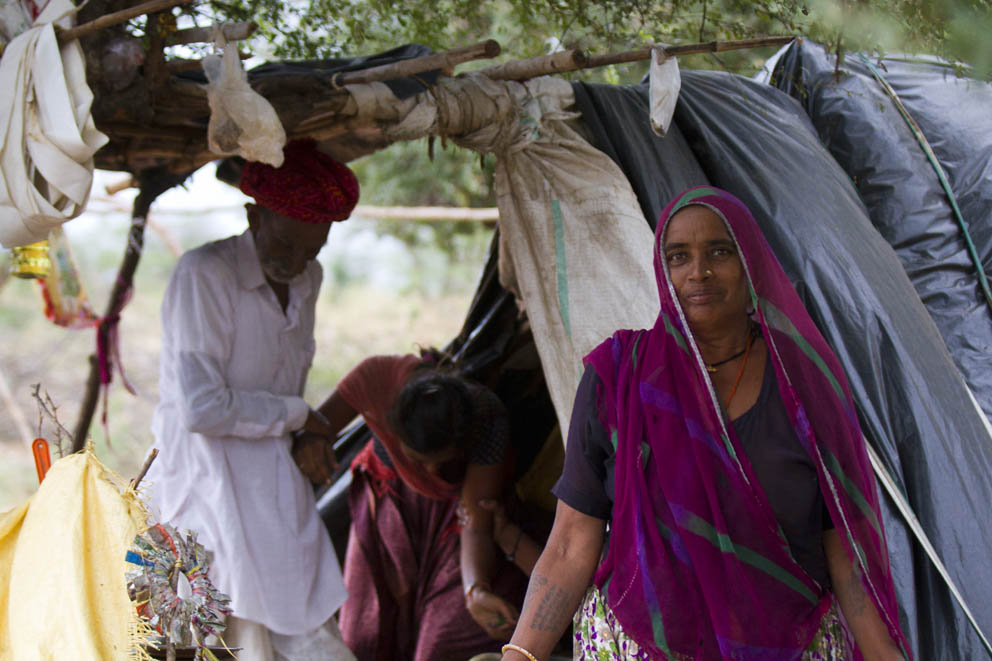 The welcome extended by this family is touching. I’m no longer embarrassed by the simple pleasure taken by country people at my arrival. Their warmly respectful greetings now seem less remarkable than our own standoffish reserve in the west. It is they who have not lost the natural curiosity of human beings for whom visitors are a rarity to be enjoyed: even if, as now, I can bring little news of any wider world that would impact on their own. As has been my habit for years I chatter away in my tongue, cheerfully vocalising whatever random thought runs through my head. What I say is irrelevant but, as I’ve remarked elsewhere, speech is multi-band and this harmless spiel keeps the channels open. My hosts smile and speak in their own language, asking occasional questions through Pappu, chiefly to do with my occupational and marital status. One thing clearly puzzles them: how do you explain the notion of “retirement” to people whose life expectation entails more or less unbroken toil from cradle to grave? 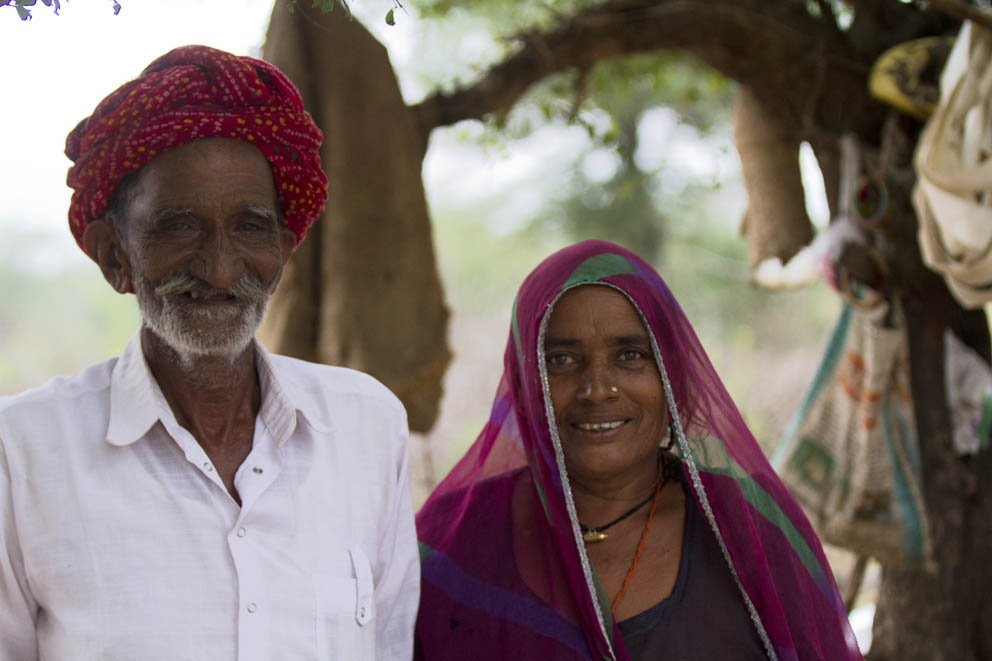 Pappu produces the ganga, the farmer a small clay chillum. From time to time one or other of the girls pops a head out, giggling as I catch her eye. What do such girls dream of? What does their future hold? Maybe mother knows best. 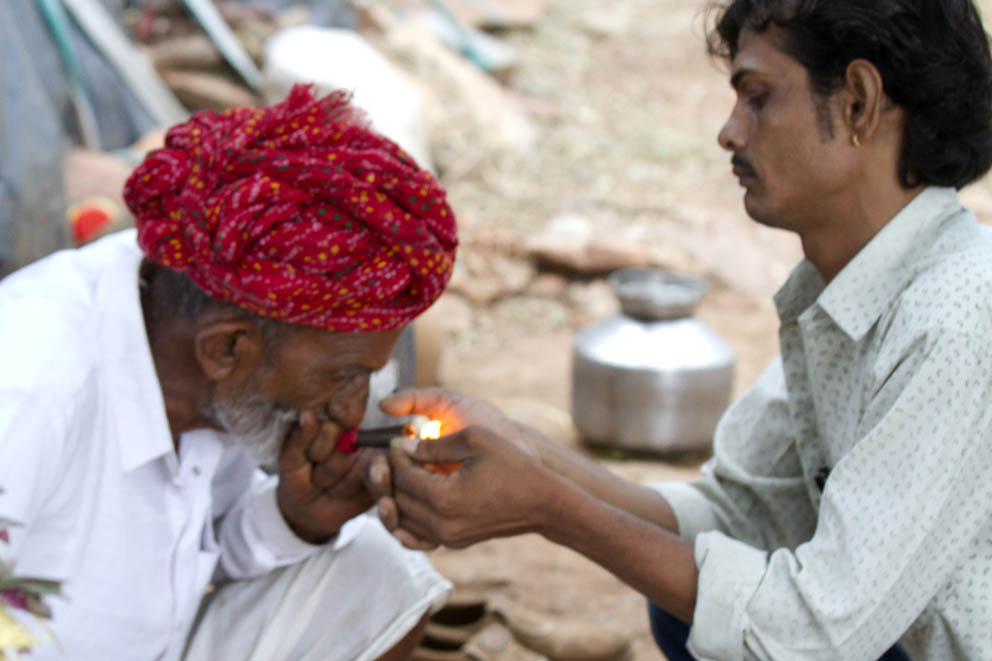 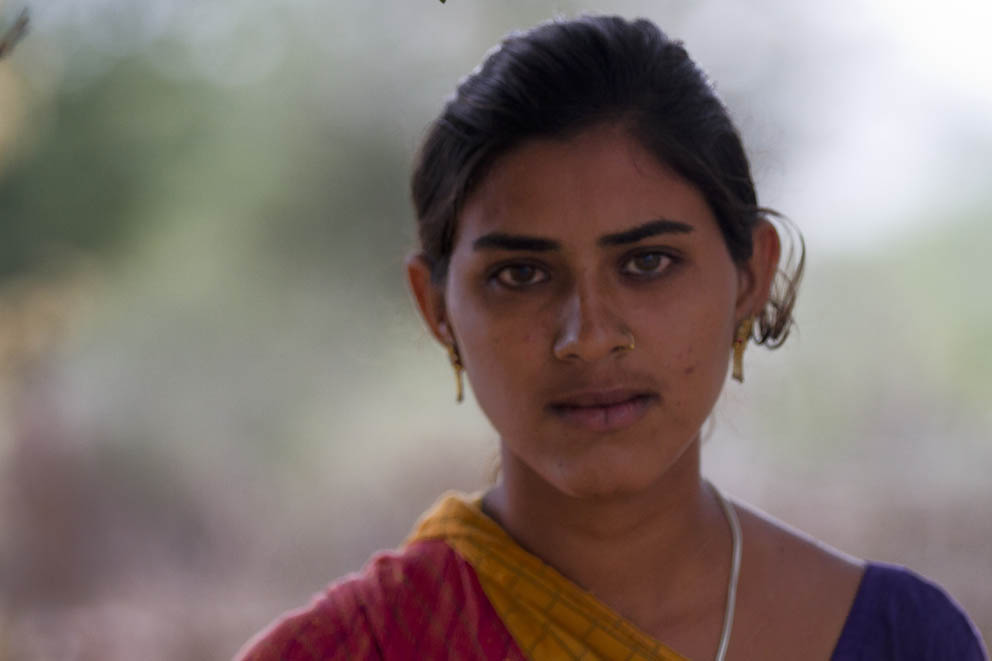 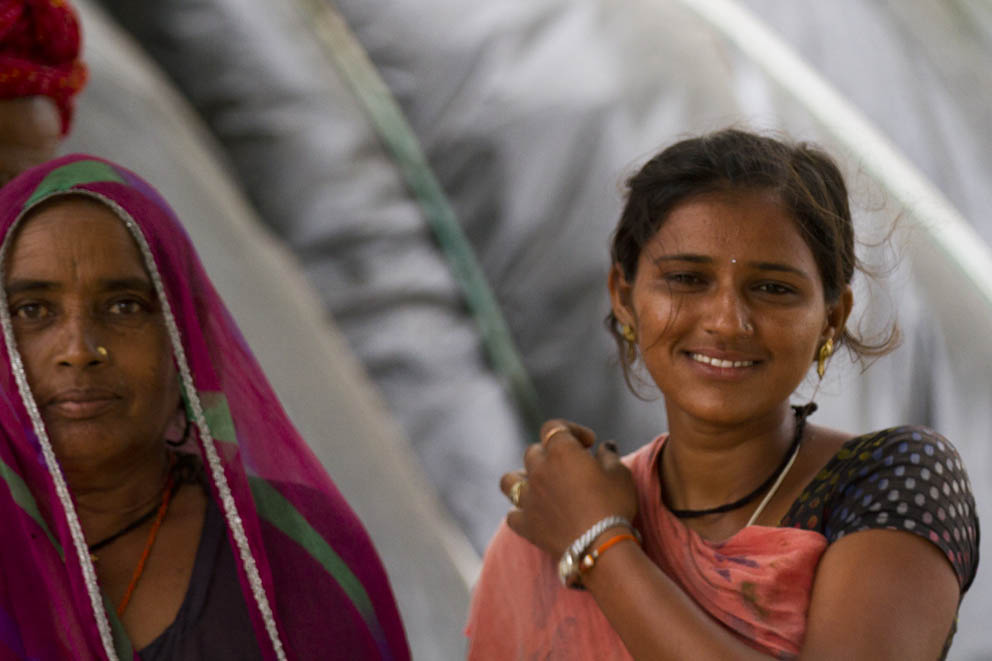 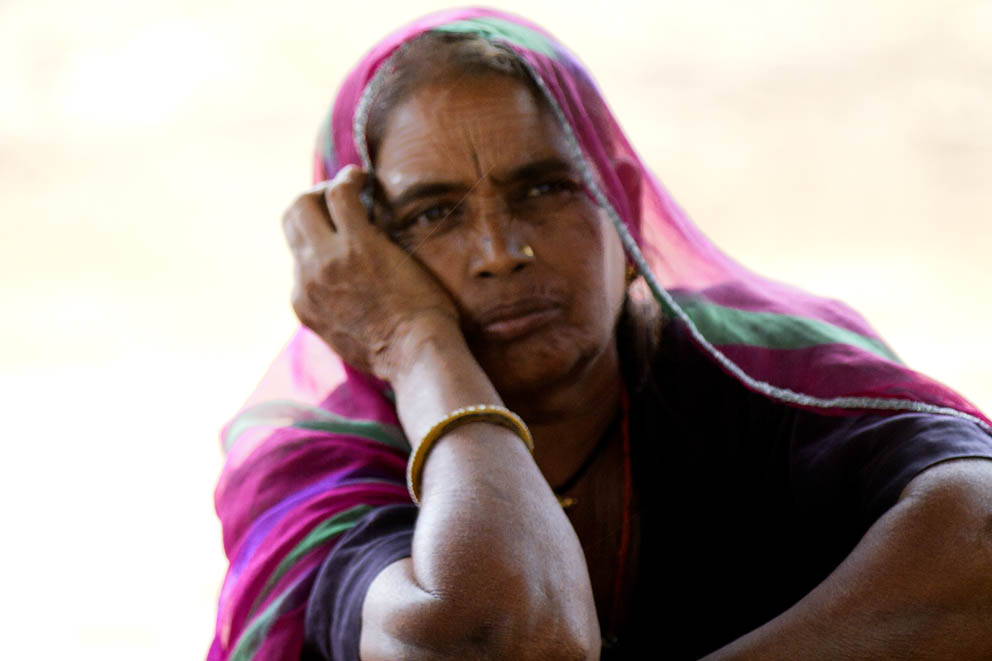 One Reply to “The waterfall at Bimla”