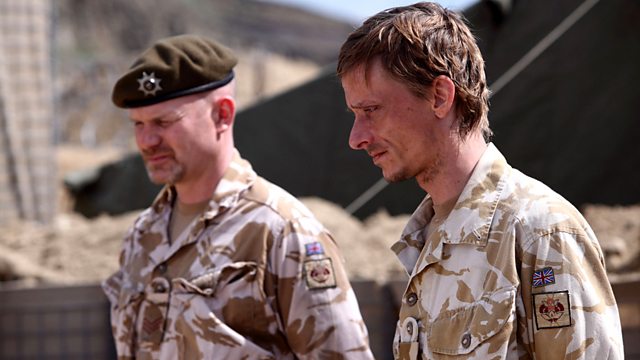 Last night I watched for the second time an episode of Accused, the 2010 series from the pen of Jimmy McGovern, now on Netflix. Here’s an abridged Wiki synopsis of Frankie’s Story:

Frankie and Peter join the army to get out of jail time after a pub assault. In Afghanistan, Peter’s cowardice has him bullied by his battalion, especially by Corporal Buckley, who dubs him “the bitch”.  When Buckley orders Frankie to urinate on Peter’s bed, Peter shoots himself. Buckley tells Frankie to keep silent as Peter is reported KIA. Frankie shops Buckley to the Sergeant, who ignores him. Frankie is now “the bitch”. He kills Buckley. Refusing to reveal his motive, he gets life with a minimum 25 year tariff.

As ever with McGovern, the principals are shown with sympathy but not sentimentality. That includes the bullying corporal, played to perfection by Mackenzie Crook. But before I get to Corporal Buckley, let me make a few general observations.

Now back to Frankie’s Story. While Jack Nicholson’s Commander Jessup, traditionalist defender of barrack room ‘rough justice’, does get to articulate his position in A Few Good Men, it is in caricature. (And what does Nicholson excel at if not – I speak as one with huge respect for this scene stealing mesmerist – caricature?) We are left in no doubt that dashing Tom Cruise is the hero of the day, the irascibly old school Commander Jessup the full-blooded villain of the piece.

McGovern and Crook – as we’d expect from artists of their calibre, unconstrained by box office diktat – are more nuanced in their depiction of Corporal Buckley. In refusing to caricaturise him, they get at truths of no interest to Hollywood, and superfluous to the requirements of viewers demanding their big screen fix of Good triumphing over Evil.

In the first, after Peter has placed rifle in mouth to blow his own brains out, Buckley tells Frankie to go with the cover story that his mate died a hero’s death; killed in action while protecting his comrades. Though patently self-serving, Buckley’s logic has undeniable force. Peter, he reminds Frankie, comes from a military family, his father a decorated soldier. Does Frankie wish to bring shame on that family?

The corporal is succinctly eloquent, adding the sweetener that Frankie may accompany the flag draped and – crucial, this – sealed coffin back to the UK:

I can arrange that. Wouldn’t you like a few days at home with the wife?

But Frankie’s guilt – he had taken part in the bullying, on pain of replacing Peter as the ‘bitch’ – only mounts. On his return to Helmand he tells Buckley he intends to grass. Which leads to the second scene in which Crook’s Buckley gets the peachy part.

With Frankie present, the platoon sergeant – a party both to the bullying and cover up – goes through the motions of summoning Buckley, whose words run on roughly the following lines:

Permission to speak freely, sarge? We don’t get many intellectuals here. Our men have very little imagination. If they did, they wouldn’t be so fucking brave – they’d be too aware of the likely consequences of their actions.

But that cuts two ways. They also can’t imagine the consequences of stepping out of line. That’s why every platoon needs its ‘bitch’ – there to remind them of those consequences. Cowards get their mates killed but that doesn’t compute for our men. It’s too abstract. The bitch is needed to remind every soldier of why he needs to man up. I’d go so far as to say that the platoon bitch has the most important role in the whole unit. Sarge.

The force of his argument is amplified by the evident fact that Buckley has the love and respect of his men 4 for a very good reason. In this ferocious environment, he has a deserved reputation for getting the men under his wing back from every mission. Alive, and usually in one piece.

Oddly enough, that counts for more with them than notions of fairness or political correctness.

As for Frankie, well, now the platoon needs a new bitch, innit?

2 Replies to “What about the squaddies in Afghanistan?”