Have you noticed how folk with zero military experience have an uncanny knack for being front of the queue in promoting wars for others to fight? Last night I checked the profile of historian and Guardian columnist Timothy Garton Ash. Like me, he’s never seen a day’s active service in all his puff – the difference being that I don’t write columns like the one he penned yesterday.

Pushing for peace: those dangerous appeasers at Nato

… a new low precisely because the bidding war I speak of creates a media feeding frenzy which fuels such terrible loss of life; mainly on the side of poorly equipped, trained and led Ukrainian conscripts. 2 Is Garton Ash incapable of seeing that a $53bn intervention from the USA alone, 3  whose elites have most to gain from keeping the war going, is the sole driver of what he rightly calls “the largest, most brutal war in Europe since 1945″?

Or that the war he now wants to see intensified carries the very real risk I set out four days ago in The lies that triggered WW3? Apropos a Ukrainian rocket strike on Poland – in all likelihood calculated to trigger an Article 5 response from Nato 4 – I wrote:

Wanting to avoid thermonuclear war does not preclude recklessly provoking a nuclear adversary in ways that up the likelihood of getting precisely that, Dr Strangelove style.

And now the Garton Ash sagely advises that “the best thing we can do for peace is to increase our military, economic and humanitarian support for Ukraine …”

Don’t you just love that royal “we”? Say what you like about the West’s fascist goons flocking to Ukraine to stand shoulder to shoulder with their spiritual brethren in the Azov Battalion … 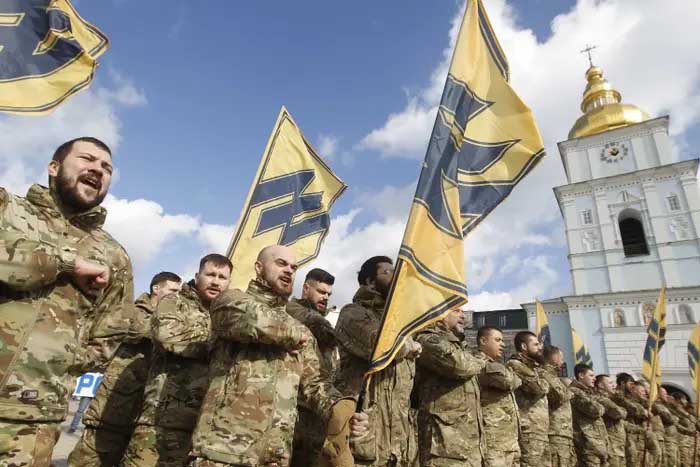 … at least they put their money where their mouths are!

Will the Garton Ash do likewise? I rather doubt it.

2 Replies to “Cheerleading for WW3”