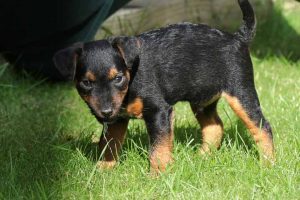 You don’t wanna mess with this bruiser. 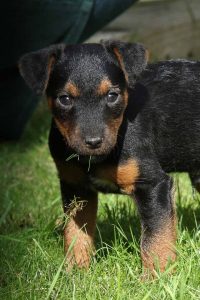 On Saturday we drove for three hours to Tebay, a fellside village ten miles north of Kendal and ten south of Penrith. At a slate terraced overlooking the River Lune and M6, with Shap Fells to the rear, we were brought into a parlour awash with rosettes and silverware.

Prizes for such as Obedience and Agility.

Two sibling puppies were brung in to bounce around with a pair of rag dolls. It was a tough call but an hour later we left, £400 the poorer, with Tebay. Here he sits on Jackie’s lap as we buckle up before heading southwards on the M6. 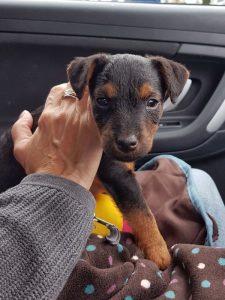 So how would he get on with the two existing steel city woofers, Jasper and Meccano? 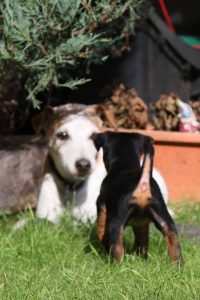 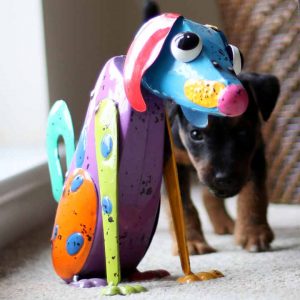 Sparks flew on Tebay’s first encounter with the latter. Near the TV set where Meccano – aka the Big Tin – likes to hang out, Tebay careered into him to set him nodding like a demented auction bidder. The fright sent the pup flying across the room but at three metres he recovered, turning about to reclaim a metre of pile. There he stood his ground to bark his tiny bark at the Big Tin.

Meccano did well not to quake and quiver but did manage a face-saving show of nonchalance. 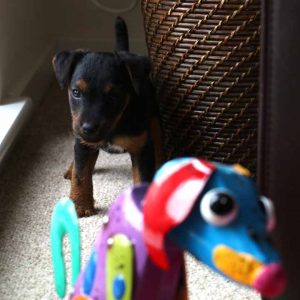 Since then Tebay has used stealth, approaching from the rear: sometimes from left; sometimes from right. That’ll fox a Big Tin who, truth be told, has always struck me as a few barks short of the full fido. I don’t expect much trouble from this quarter.

With Jasper things are more complicated. Though I started my sixty-eighth spin round the sun a week ago, he is my first dog and I’ve a lot to learn. On Day One I gave Jasper a chewy stick, on the ground he needs pampering and reassurance at this difficult time for him. He retreated to his den with it and, when Tebay followed him there – as he follows him everywhere if allowed – growled at and nipped him.

Fearful for the wee feller, I spoke sharp words and followed with sharper tap to nose. I’ve done that maybe five times in ten years – he’s the easiest dog imaginable – so this shook him up no end. I’ve since learned that the growl of an older dog is not to be discouraged. A key item in the dog socialisation toolkit, it is vital to setting boundaries for canine junior.

Knowing your place, and the virtues of deference, are important. You can’t always get what you want. But if you try sometimes, you just might find … 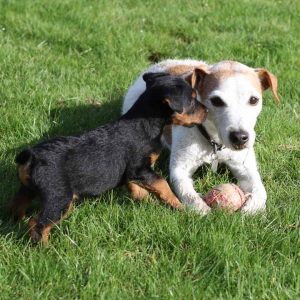 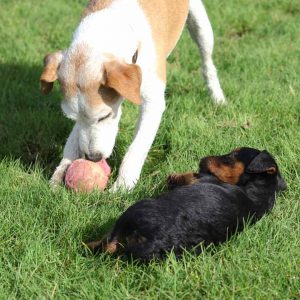 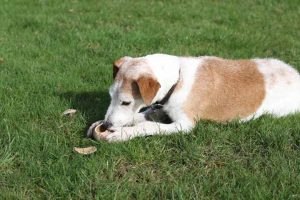 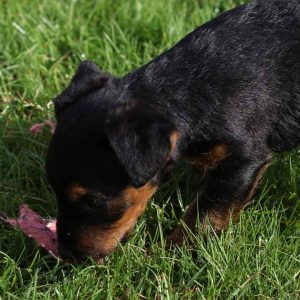 We feed Jasper first, of course, and let him lie on our settee. (He’s never given off a dog smell. I think that’s down to a wiry coat Tebay will also develop.)

Tebay is for now unable to join him up there, and we won’t help. As with feeding order, height is a marker of natural hierarchy. Disrupting that hierarchy is a recipe for discontentment all round. This is one of the few doggie things I did already know.

So watch this space. My readings suggest three or four weeks for the top dog to get used to the incomer. I’d say things are looking good. There are other issues of course: toilet training, and setting the kind of boundaries Jasper can’t help us with. Tebay’s sharp but tiny teeth make his bites to toe and finger amusing right now, but are to be discouraged. Ditto jumping up at folk.

Ditto too the crying at night. As with babies this is the hardest aspect but here too we’re making progress after just three nights. Night one had him howling from his basket and cage in the kitchen. After consulting a few websites on the matter we moved him and cage to our bedroom but otherwise disregarded the howling, responding with soothing noises when it ceased.

The idea being that he – coping incredibly well given so much change, and loss of family for so highly sociable an animal – will be reassured by the smell of us and sound of our breathing. It’s working already. Each of the two successive nights have seen a falling off in the crying to quiet ratio. Over the next few nights we’ll move him further from our bed, out onto the landing with open then closed bedroom door, and finally downstairs.

I do hope he’ll be as as quiet a dog as Jasper, though I guess that too is largely – not entirely but largely – in our gift. I’d hate to be the owner of one of those tirelessly yapping dogs that breach the peace and wreak ear-splitting discord at beach or park.

A little more on Jasper. Tebay’s arrival coincided with Rhianna and two pals from uni sleeping over at Steel City House after a night’s clubbing in Nottingham. Sunday morning, Tebay’s first here, Jasper sat on her lap. He’s never done this with anyone before: it’s just not his thing. 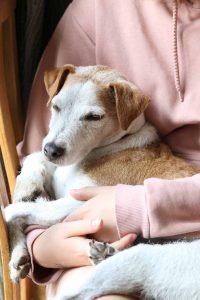 Other telling behaviour? With the trio of night owls crashing on bed and lilo in the now rarely used room of Charis the fledgling younger sister, Jasper had been allowed to sleep there too – one super big deal of a treat in line with the game plan of associating, Pavlov style, the arrival of Tebay with Good Things Happening.

But in the morning a chilling discovery was made under the bed, where butter-wouldn’t Jasper had taken himself with a baby doll, one of many toys Charis (twenty!) won’t let go of. What you have to appreciate, to take in the full significance of Rhianna’s find, is that Jasper the Serene has always presented to the world at large and us in particular as a textbook case of well balanced houndhood: ease epitomised, the quintessence of cool.

Which puts the retrieval of that doll, wrist chewed through at the bone to sever right hand from the jagged stump of one plump but daintily proportioned arm, up there with discovering that your friendly neighbourhood vicar likes nothing better, when taking time out from the day job, than to hold up the nation’s post offices with a sawn-off.

Or at any rate fiddling his tax returns.

And cheating at cards.

So go figure. And like I said, watch this space. 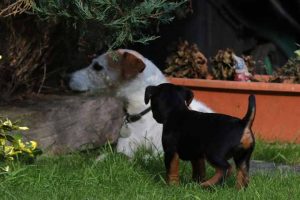 One thing we can be thankful for. The rule of law still holds at Steel City House … 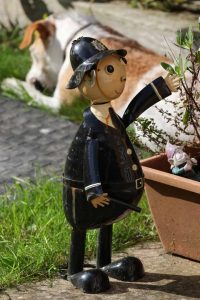 … so I’m confident of getting my reading glasses back in the fullness of time. 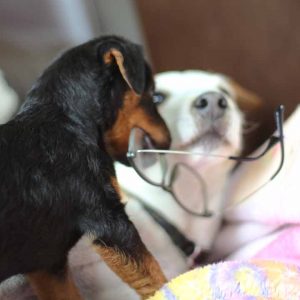 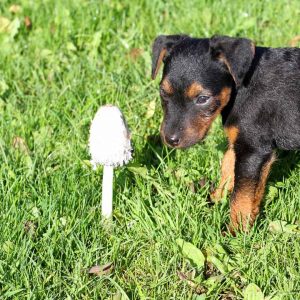 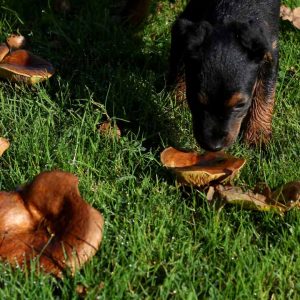 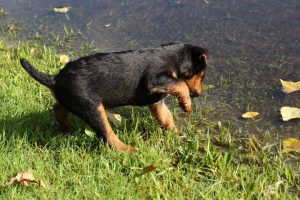 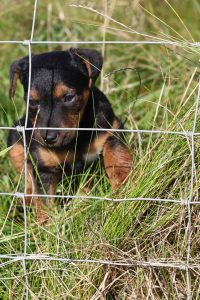 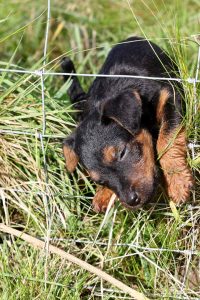 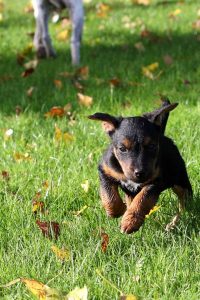 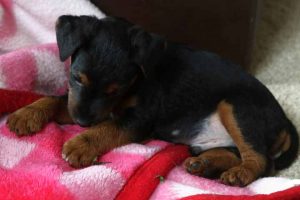