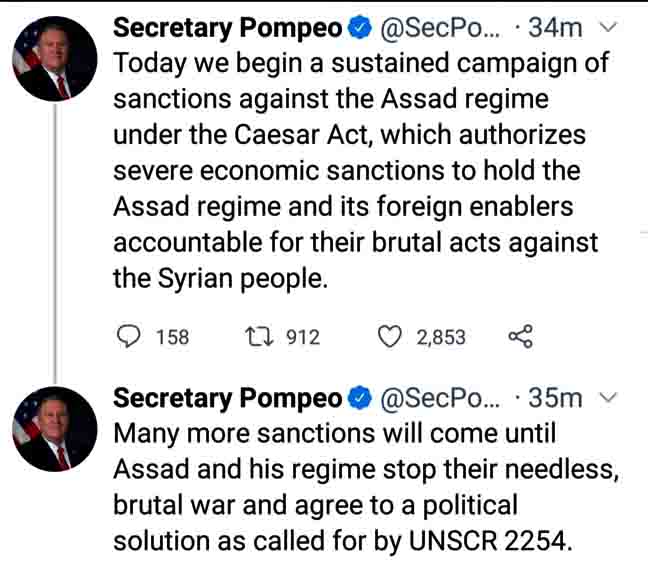 While debate rages on whether the statues of colonial plunderers should be tossed into rivers or otherwise removed as blots on civilised landscapes – and as we progressives virtue-signal our damning of racism while enjoying to varying degree its fruits1 – looting and sacking of the global south continues apace. 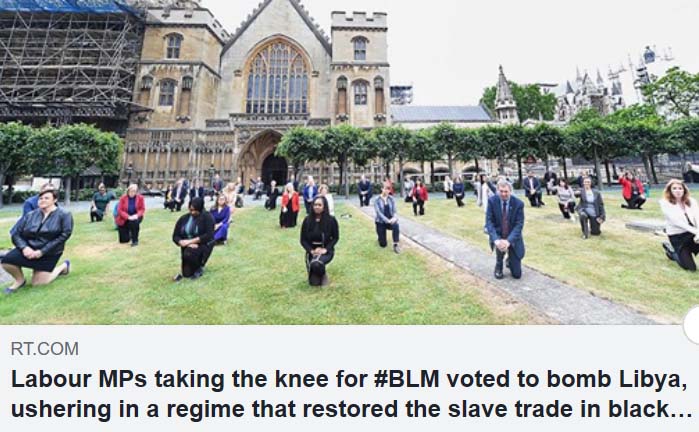 Only now we don’t call it colonialism. Direct rule of Asia, Africa and “Latin” America, which for all its horrors imposed a modicum of responsibility on Europe’s maritime powers, has largely gone.2 Now we have the arm’s length – market discipline – controls of imperialism, practised by the former colonial powers and a good few more, all in the global north.3

(Like ‘ruling class’, I ration my use of ‘imperialism’. It puts off readers who might otherwise be receptive to the things I say. And as with ‘ruling class’ – defined by its monopoly ownership of some essential of wealth creation – I offer a simple but robust core definition. Imperialism is the export of capital from north to south, and repatriation of profits in the reverse direction. These remarkably consistent flows are empirical facts, as IMF, WTO and World Bank data attest.)

As with colonial powers, the imperialist powers are either armed to the teeth (Britain, France, USA) or in half competitive cahoots (Germany, Japan) with those that are. Almost as important, their control of narrative and ability to manufacture consent, subject of a recent post, enables them to sell wars of profit, the victims overwhelmingly brown skinned, as altruistic intervention in the Gladstonian tradition, and/or as defensive moves to take out a Threat To Us All.

This is by way of scene setting. Yesterday, US Secretary of State Mike Pompeo told the world of a new round of sanctions dubbed, for reasons I’ll get to in a moment, the Caesar Act. It targets the last remaining Ba’athist state.4 Here’s a press release by the State Department, though Pompeo’s tweets give the gist.

The rest of this post is dedicated to addressing these questions.

What harm do sanctions inflict?

For many a decade we’ve been nurtured in a view of sanctions (preferable to the harsher term, ‘blockade’) as almost benign – the gentle nudging by a caring parent to encourage a wayward child to mend her ways. The most serious puncturing of so naive and rose-tinted a view came when, it having emerged that half a million Iraqi children under five had died as a result of Bill Clinton’s sanctions, his Secretary of State Madeleine Albright defended them as “a price worth paying”.

Though their creators deny this, sanctions kill indiscriminately and are intended to do just that.

(Former National Security Advisor John Bolton, now a thorn in the side of the boss who cut him loose, let the cat out of this bag when he declared his desire to see ordinary Iranians suffer to the point where, in desperation, they rose up to overthrow the theocrats in Tehran.)

But they do have this one merit. Thanks to that naïve view of them – damaged but not fatally so by the utterances of Albright and Bolton, and by UN/WHO data few read – sanctions, unlike bombs and returning body bags, never bring people out onto the streets of Western cities.

Why is this round of sanctions called the Caesar Act?

This from a CounterPunch piece of March 2016:

On 20 January 2014, two days before negotiations about the Syrian conflict were scheduled to begin in Switzerland, a sensational report burst onto television and front pages around the world. The story was that a former Syrian army photographer had 55,000 photographs documenting the torture and killing of 11,000 detainees by the Syrian security establishment.

The Syrian photographer was given the code-name ‘Caesar’. The story became known as the “Caesar Torture Photos”. A team of lawyers plus digital and forensic experts were hired by the Carter-Ruck law firm, on contract to Qatar, to go to the Middle East and check the veracity of “Caesar” and his story. They concluded that “Caesar” was truthful and the photographs indicated “industrial scale killing”. CNN, London’s Guardian and LeMonde broke the story which was subsequently broadcast in news reports around the world. The Caesar photo accusations were announced as negotiations began in Switzerland. With the opposition demanding the resignation of the Syrian government, negotiations quickly broke down.

The piece goes on to list no fewer than a dozen “significant problems with the ‘Caesar torture photos’ story”. To be sure, the lies already proven of Western media and politicians in respect of Syria are huge. But for reasons I’ll go into, even if everything said of Assad and the Damascus “regime” were true, I’d still oppose imperialism’s dirty war on Syria.

But at least we know why it’s called the Caesar Act. Who knows? Maybe it’ll pop up, many years from now, in a round of Trivial Pursuits.

Why should we trust what Washington says about Syria?

No good reason – but a few dreadful ones. By any number of metrics, America is the world’s foremost rogue state. What would your proverbial Martian make of its unique and militarily unnecessary5 use of nuclear weapons … proliferation across the planet of military bases which outnumber those of all other nations combined … the chilling extent to which armaments are key to the US economy … the non stop wars on the global south … the flouting of inconvenient UN resolutions … the underwriting of Israeli apartheid and backing of coups to install far more Washington friendly dictatorships than I can keep count of?

The enormous gap between what US leaders do in the world, and what Americans think their leaders are doing, is one of the great propaganda accomplishments.

Why then is it given a free pass by so many of us? Why, in the face of overwhelming and quite damning evidence, is the good ol’ US of A seen as a force for good? I’ve gone into this question elsewhere and more than once. Here I’ll confine myself to the basics.

One, it helps that, thanks to a previous apex predator, English is the world’s lingua franca.  The advantage is incalculable as the hard propaganda of news delivery, and the soft propaganda of the entertainment industries, paint a nuanced but – as the final credits roll – ultimately glowing picture of Uncle Sam. 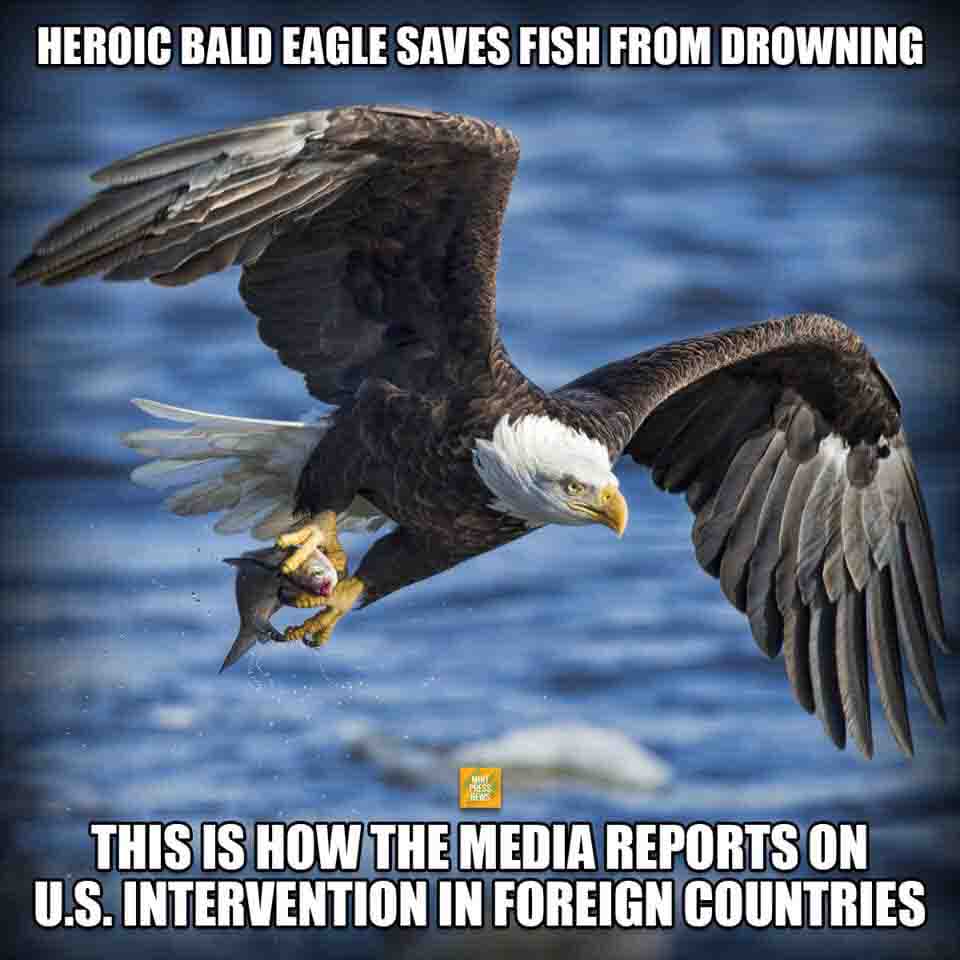 Two, America emerged from WW2 as the stronger of two new superpowers. Three, this reality was cemented by Bretton Woods, Marshall Plan – and, later, Nixon’s decoupling from gold, and arrival of the petrodollar system. All in the context of a cold war on the other superpower.

Other imperialist nations, as they more or less reluctantly withdrew from their colonies, had to choose between looking to Moscow or to Washington. This was a no-brainer, the occasional outburst of resentment – from France especially – notwithstanding. In a world divided between the Good Guys of a Free West, and the Bad Guys lurking behind the Iron Curtain and itching to enslave us all, Washington was our protector and saviour from Red Tyranny. Now things are a little more complex – not least because in the War on Terror it spearheads, America has a habit of covertly backing The Enemy in places like Syria6– but the legacy has life in it yet.

Why should we trust what Mike Pompeo says about anything?

Phew! I’m tired and wanting a coffee break. I needed an easy question.

What do America and its junior partners really want in Syria?

In Israel: a Beachhead for the West – see my review – Stephen Gowans says this:

The ultimate purpose of dominating another country is to secure opportunities for big business to accumulate wealth. The dominated country may provide direct opportunities for wealth accumulation, or be a stepping stone to profit-making opportunities in a third country, without offering attractive opportunities of its own. Such a country may become the target of an imperialist power because favorably placed. Perhaps it bounds important shipping lanes and is prized as a naval base from which the movement of goods can be protected from rival imperialist powers that might choke off the flow. Or perhaps the aim is to position military power at a shipping choke point. Or maybe the territory is close to enticing targets that could be absorbed through military coercion. Maybe the dominated country is close to another imperialism and attractive for encircling it. There are scores of reasons why an imperialist power might dominate a country that offers no immediate or direct economic benefit, but all are traceable to a perceived economic advantage for the dominating country’s major investors.

In fact Syria ticks most boxes. Direct opportunities for wealth accumulation? Not as obvious as in Venezeula or Iran7 but do see the piece I wrote, informed not least by The Economist, on oil in a Golan Heights illegally occupied by Israel and now test drilled by Genie Energy, its board taking in Rupert Murdoch, Dick Cheney, a former CIA director and others in the same club.

It’s a characteristically grubby story but is in fact eclipsed by a greater imperative. The more you look into the workings of capitalism with the brakes off, i.e. the capitalism of forty years of post Keynsianism, the harder it is to avoid concluding that the goal is to privatise the world. A once free public loo monetised … casualisation of British academics in a climate of bums-on-seats marketisation … cold war to bring down the USSR … market forces unleashed with devastating effect in Walewski’s Poland … crippling debts imposed on Mandela’s South Africa … victor’s spoils in post invasion Iraq8 … All and any opposition to that drive must, one way or another, be dragged into the light of a world run for profits – aka one run by and for the criminally insane.

Just kidding. There’s still Iran. And Venezuela. And Yemen. And Cuba. And China …

Gas pipeline? Syria, for the most part non oil producing, has warm water ports on the Eastern Mediterranean. These are ideally placed for a pipeline joining the big players with Europe, the world’s largest energy market. The southern route favoured by the West, through the Gulf, was eschewed in 2014 by Assad in favour of the northern route backed by Iran and Russia. Brazilian journalist Pepe Escobar is good on this, though we should tread carefully. Other drivers of the dirty war on Syria are at least as important.

In fact the biggest driver of all is also addressed by Escobar, in a piece – Battle of the Ages to stop Eurasian integration – which featured in my January reads post. I recommend reading it in full, preferably with a world map to hand. Meanwhile here’s a sample:

Russia is showing China how the West respects realpolitik power in any form, and Beijing is finally starting to use theirs. The result is that after five centuries of Western domination – which, incidentally, led to the decline of the Ancient Silk Roads – the Heartland is back, with a bang, asserting its pre-eminence …

… Last summer, an Iran-Iraq-Syria trilateral established “the goal of negotiations as to activate the Iranian-Iraqi-Syria load and transport corridor as part of a wider plan for reviving the Silk Road.”

There could not be a more strategic connectivity corridor, capable of simultaneously interlinking with the International North-South Transportation Corridor; the Iran-Central Asia-China connection all the way to the Pacific; and projecting Latakia towards the Mediterranean and the Atlantic.

What’s on the horizon is, in fact, a sub-sect of Belt & Road in Southwest Asia. Iran is a key node of Belt & Road; China will be heavily involved in the rebuilding of Syria; and Beijing-Baghdad signed multiple deals and set up an Iraqi-Chinese Reconstruction Fund (income from 300,000 barrels of oil a day in exchange for Chinese credit for Chinese companies rebuilding Iraqi infrastructure).

But, hey, let’s not get all fancy and complicated about things! Let’s just take Mike Pompeo – a fully paid up born again bible carrier; former deacon and Sunday School teacher to boot – at face value on his Caesar Act. Life’s a whole lot simpler that way.