In case I haven’t made this clear, I take the Ukraine situation very, very seriously. Not that I deem war inevitable or even probable. (There’s too much smoke ‘n mirror stuff here for anyone to call with justifiable confidence. 1 ) Just that, given both the stakes and military capacities of the real adversaries, the fact that war is possible at all should so horrify us as to want the fullest and most accurate picture available of what is happening and why.

Here’s Anne, a Facebook friend in Cairo who’s scathing of US Empire, posting four days ago:

NATO/US cannot understand why Russia is building up troops on its border to Ukraine. Do not know if I should laugh or cry.

Anne has another FB pal, Donna, east of NYC on Long Island. Donna is critical of US wars but, like many patriotic but mildly left/pacifist Americans (I’m inferring this from our exchanges and a brief scan at her FB output) sees Russia as at least as bad.

Donna’s response to Anne of Cairo was this:

Maybe if Russia hadn’t annexed Crimea just a few years ago, and built up 100k+ troops at the Ukrainian border, NATO wouldn’t be so nervous.

Which had me wading in with a three-worder, then an image which visitors to this site have seen a dozen times:

Which drew this from Donna:

Philip Roddis are you suggesting that NATO invaded or annexed these countries? Or they joined NATO against the people’s will?

I of course replied that smoke gets in your eyes:

Donna – here’s what I am suggesting. Let me know what you think, once you’ve read it.

I can’t be sure she actually did read it but respond she did, an hour or so later:

Philip Roddis this article is one-sided. Please present a corresponding article showing the lies, posturing, and proxy wars conducted by Russia. What, there are none? Russia is a saint? I call BS.

A few words on such a response. One, it reflects the lazy assumption that, given two mutually exclusive claims, the truth will lie “in the middle”. As tentative hypothesis this has its admirers – back in the day, systems engineers and programmers called it the “binary chop”. But as a final position it smacks of the obdurately idle: what I call the “Hitler-was-bad-but-the-Jews-were-no-angels” gambit. Though at root idiotic, it offers those who deploy it a great excuse for throwing hands in the air to declare a plague on all their houses. As when the SWP had the cold war strap line, “neither Washington nor Moscow”. As when an expensively educated man of letters wrote a few weeks ago to let me know that “China is far from blameless”.

ONE nation is circling the planet with hundreds of military bases, waging endless wars that killed millions and displaced tens of millions in this century alone, and works to destroy any nation disobeying its dictates. That nation isn’t China. Unbelievable that this needs to be explained – Caitlin Johnstone

Two, I’ve been blogging too long to be caught out this way. In the early days I’d cheerfully do all the legwork while my critics, below the line or on social media, sniped and threw red herrings till I’d run myself ragged. These days I’ll still put in the hours if I deem an interlocutor serious – but now I require a token of their preparedness to do likewise. Donna’s demand that I “present a corresponding article showing the lies, posturing, and proxy wars conducted by Russia”  is at the absurd end of specious. That, surely, is her job!

Three, as with that China-not-blameless non sequitur, a strawman argument is being advanced. Neither in my comments on that FB thread, nor anywhere on this site, do I credit Russia – or Mr Putin – with sainthood.

Back to my exchanges with Donna. I replied:

I’m used to being called ‘biased’ and ‘extremist’ by people who hurl these generalisations rather than engage me on the specifics of what I say. I try to leave room for the possibility that you are different, and capable of engaging me at that level. Want another shot? Show me on which points in that piece (or any of the others I’ve written on this subject) I got it wrong.

A day later, to her credit, she came back with this:

Philip Roddis I will get back to you as any serious conversation on the subject would take quite a bit of research on my part. However, I did not call you “biased” nor “extremist”, rather that the article was One-sided. This does not mean that the article is false. Since this kind of research seems to be your wheelhouse, I also requested the same in depth research on the Russian government- which you are leaving me to do. An unwillingness to explore both sides of an issue definitely shows a bias in my not-so-humble opinion.

It took me close to two days to come back with a summary of my stance on this subject:

Donna that’s a reasoned and reasonable reply. Thank you. It’s taken me a while to get back because this crisis in Ukraine has seen me both writing further posts – you can check my most recent ones on the steel city scribblings site you’ve already accessed – and engaging others on the subject.

In a nutshell my minority view on all this is informed by the following. One, few of my interlocutors know the first thing about Ukraine’s history or of how the break up of the USSR stacked up massive future problems not only in Ukraine (even before the US backed Maidan coup unleashed fascist currents which make the far right of my country and yours look like boy scouts) but in Georgia, Kazakhstan and other Central Asian Republics whose ethnic Russian majority in discrete areas (Donbas/Donetsk and Crimea in post 1990 Ukraine, Ossetia in post 1990 Georgia and similarly besieged groups in the “stans” of Central Asia).

Kiev respecting the Minsk Treaty 2 would help in respect of East Ukraine!

Two, few know the nature of the coup – George Soros money and Victoria “fuck the EU” Nuland’s incitements – which ousted Yanukovych to install Poroshenko’s cabinet of Russophobic, anti-semitic (it’s rare I back Israel but she is right on this) Bandera idolisers. For the ethnic Russian majority in Crimea (which voted in 2014, 2015 AND 2019 to secede to Russia) Kiev had declared war on half of a nation whose current borders make little sense historically or logically. As in other parts of the former USSR (and for that matter in the Six Counties of ‘Northern Ireland’ 3 ) an artificial state has been a recipe for seething resentment. 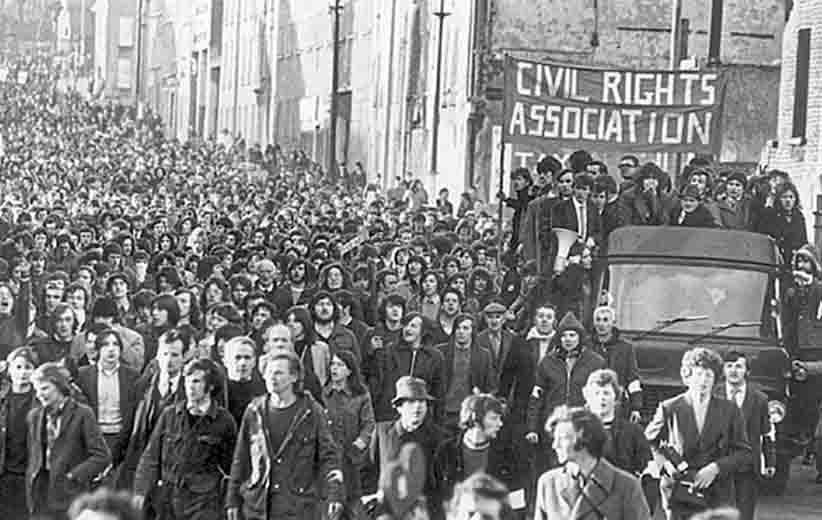 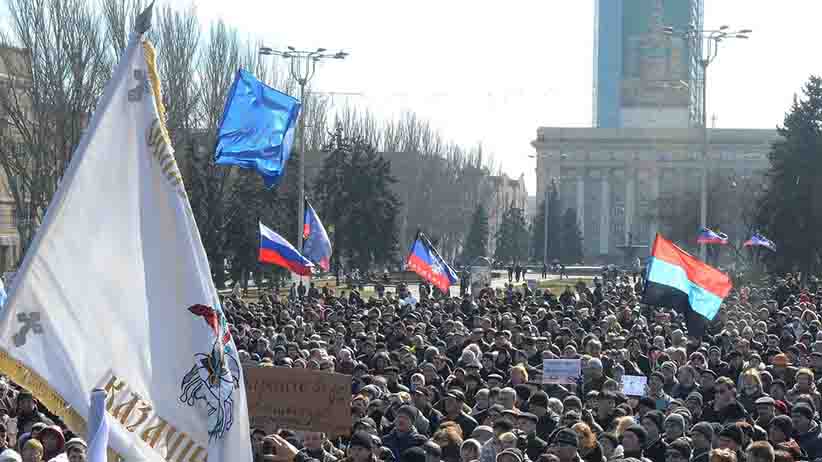 Pro-Russian demonstration in Donetsk, March 2014 (a month after the Maidan coup)

Three, neither your country nor mine gives a flying fuck about Ukraine. A bigger game is being played out here.

Four, repeated promises were made in 1990/91 to Gorbachev that NATO would expand “not one inch eastwards”. (This is one of the reasons I posted that [NATO expansion] map in an earlier comment on this thread.) It’s one thing to provoke a weak power. But Russia, with hypersonic missiles to which NATO has no answer, is no longer weak.

Five, for reasons given [here] corporate media – though they do have subjectively honest journalists and editors – are systemically unable to tell us the truth on matters of core importance to those who rule. The game being played out on Russia’s Western border, I’m afraid, falls into that category.

Other points – most importantly that the US would not for a second tolerate comparable ‘containment’ on its own borders by a hostile alliance – have already been made on this thread.

As Donna has not replied, since I made that last comment two days ago, I deem our exchanges closed – but leave room for the possibility of her delivering on her promise to get back to me.

Let me finish with a general observation. It’s now getting to be a habit with me of using more or less adversarial exchanges (by email, on social media or in below-the-line debate here) to make my points. I find it an efficient way of clarifying my thinking on an issue. As always, comments from those whose take differs are welcome.