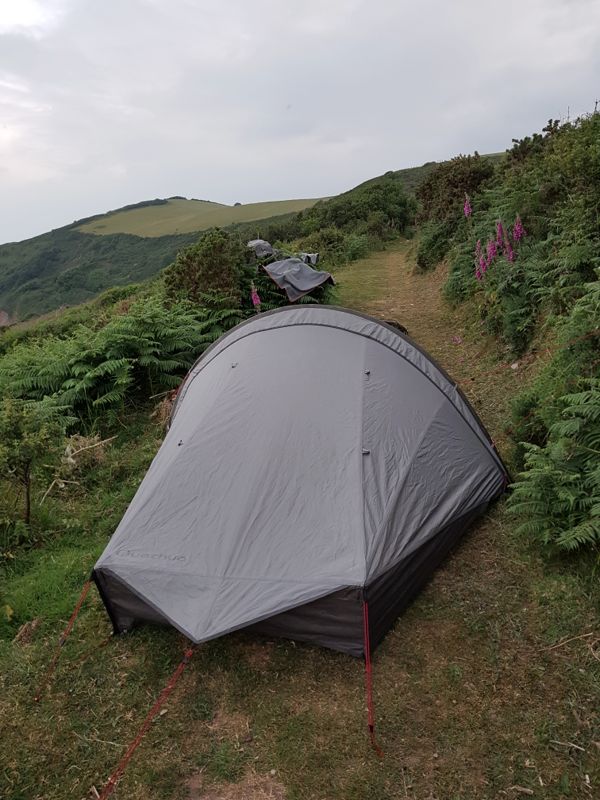 I’d never thought to be out for so long. As Day Twenty dawns I emerge early, for reason given at end of Day Nineteen’s post, from a path-obstructing tent. I don’t yet know it but this will be the last morning of my trip – three weeks to the day if we include Day Zero, when I arrived by train in Bristol to check in at the YHA on the quay.

Only yesterday I’d told Marcus, in my call from Polperro, I was good for as long as the weather held. (That I’ve been out this long is down to so many days of shine and so few of rain – only one really, disregarding an hour or two of light drizzle.) But as I strike camp on what looks set to be another scorcher, I recall that Jackie is in Bristol this weekend to get Rhianna, at the end of her law degree, and kit back to Sheffield. If I can get there by Sunday, and if there’s space in the car, I’ll get a lift. That alone wouldn’t swing it but, my words to Marcus notwithstanding, I’ve now caught up with the fact I’m sated. It’s been a great run – well, walk – but I no longer have quite the same zest for setting one foot in front of the other as miles of shoreline and cliff top wind everly onwards into distant and endlessly unfolding horizons.

Tent packed, I’m in pleasant Portwrinkle by seven-thirty. I finished off the last of my water last night but, spying a woman about to leave her holiday cottage to walk a beagle, have her fill my flask while I hold the woofer. Water means coffee, brewed on a sea-facing bench overlooking the tiniest harbour I ever saw. My pictures don’t convey its full minisculity but, believe me, I’ve seen bigger garden ponds – though this one’s empty for now, it being low tide. 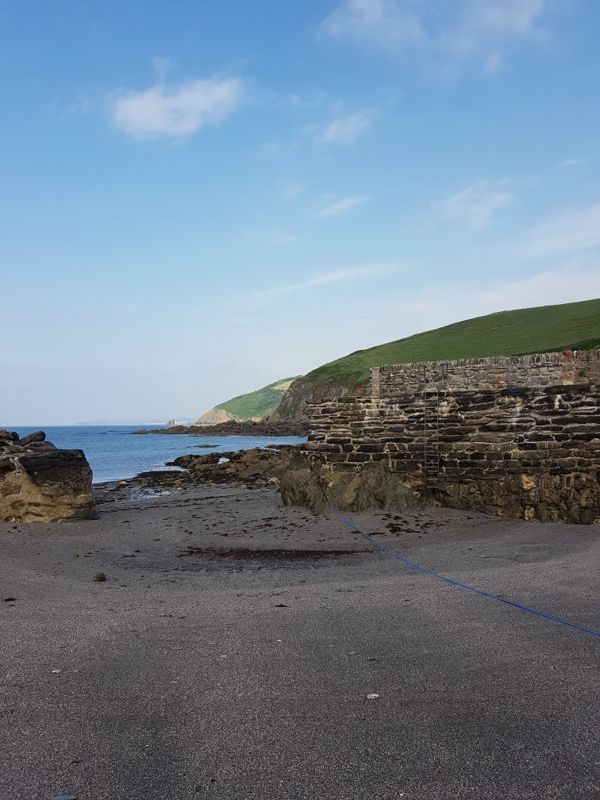 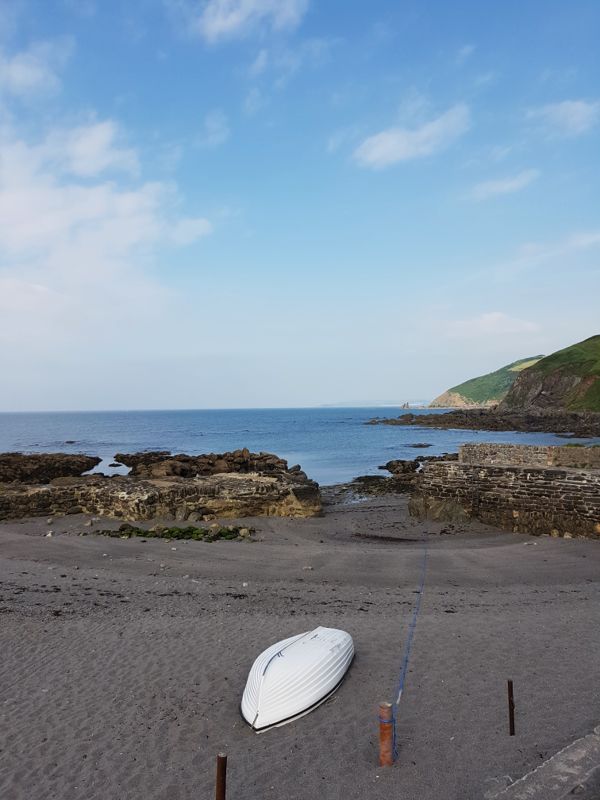 Sipping coffee, with tent draped over an adjacent seat to let wind and sun give the dew a blow-dry, I peruse maps and figure a strategy. As I do so, the red gleam of a double decker takes a turn in the road running down to – then for two hundred yards parallel to, then up from – the shore.

It hadn’t occurred to me this place might be served by bus. Impatient, I’m too quick to unscrew Vango burner from gas canister. Dropping it like a scalded cat, it lands on my down jacket to scorch a small but consequential hole above left pocket. In an instant the first silky feather is making a bid for freedom. An inch of gaffer tape, unwound from top of biro and torn away with clenched teeth, effects an unseemly yet workable fix, but if that bus was going any place I want to be, it won’t be taking me with it. No worries. I’ve time on my side and the day’s too pleasant to stay irritated by such trifles as burnt fingers, scarred jackets or missed buses.

Worldly goods packed once more, I hike over to where I’d seen the bus. Several good tidings present themselves. First, the new summer timetable tells me the one I’ve missed is going west where I want east. Second, it further informs me that the bus I do want – as in really  want, as it’s going all the way to Plymouth – is due in thirty-six minutes. Third, I can get it for free. This is Saturday so I needn’t wait for a bus after nine-thirty. Fourth, I can see, a hundred and fifty yards up the road, a public loo that looks open. Five – well I’ll get to five in due c.

At the loo I get all my kit off to wash as nature intended at a tiny basin with single tap – and no, it’s not the hot one but what care I for such frivolities? Anyone entering will (a) be male and (b) unlikely to object to a wayfaring silverbeard doing no harm bar splashing water on stone floor. But nobody does come; it’s only ten past eight.

I take my time and make a thorough job. When I’m done, dressed in clothes washed at another public loo just yesterday in, I tell no lie, Looe, I’ve fifteen minutes in hand. Ample time to boil a cup of water for my first shave in three days. I can’t tell you how good that feels as I ankle over to the stop, where my bus has just arrived, the only humanoid in sight its driver in shorts and red t-shirt, taking a stroll while smoking a fag. I know he won’t be leaving for four minutes yet. 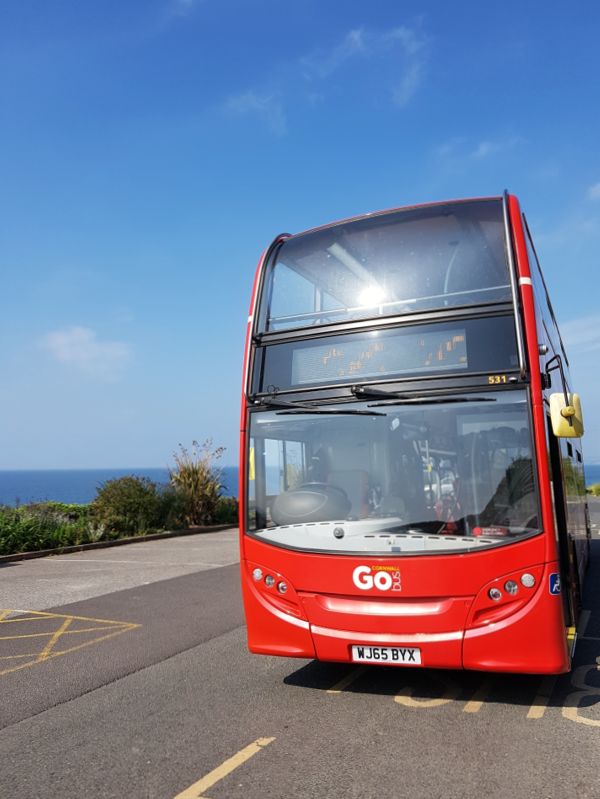 Good news item number five? Buses to Plymouth from Portwrinkle alternate, one going inland via Liskeard, the other hugging the coast up to Torpoint, where it crosses the mouth of the Tamar by – tada  – ferry into Plymouth. And mine’s in the latter camp. I never in my life took an ordinary bus – as opposed to coach to Europe – using a ferry. Am beside self with excitement. 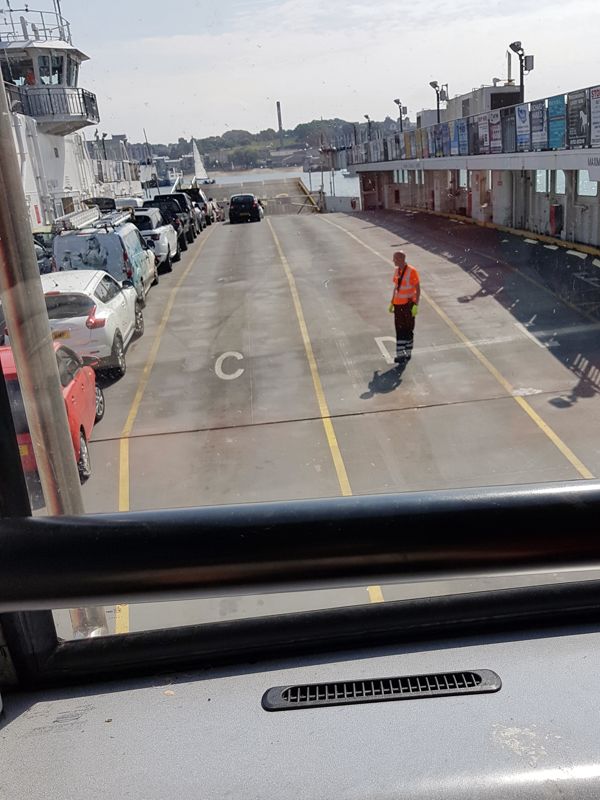 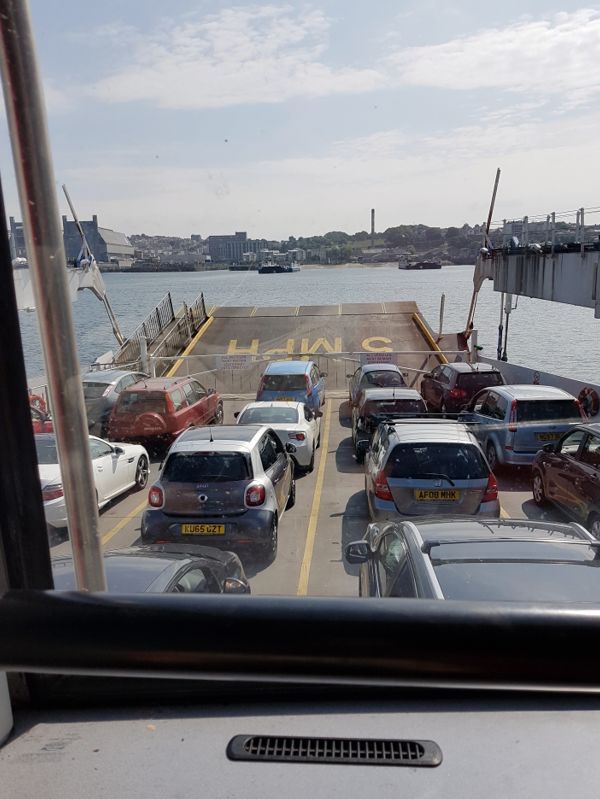 But there’s more excitement in store. I’m no longer the sole passenger, the bus having picked up a respectable complement on its journey up the coast. 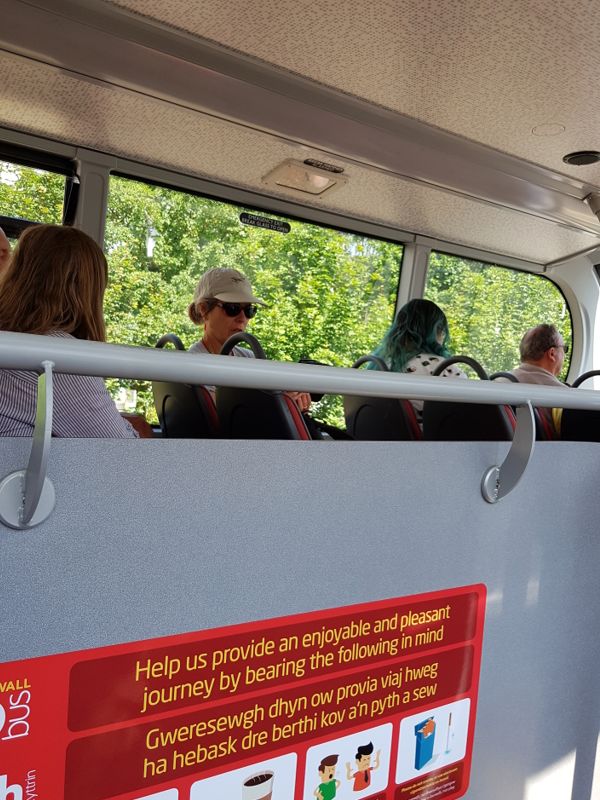 Yes, they’re pushing Cornish the way they’ve done for decades with Welsh. I’ve heard tell that Bretons, Corns and Taffs would in ancient times have been able to converse without recourse to Google Translate – but I digress.

Earplugged into Pink Floyd, I missed the announcement. Everyone is decanting from bus and ferry both. I do likewise, stopping to ask the driver, standing by the door, if I need to take my rucsack from the luggage holder. Affirmative, he nods.

I join the others, all streaming from the ferry, directed onto a lookalike ten yards downstream. From its foot passenger deck I look back to see a stream of cars, then our bus, reversing up the slipway. 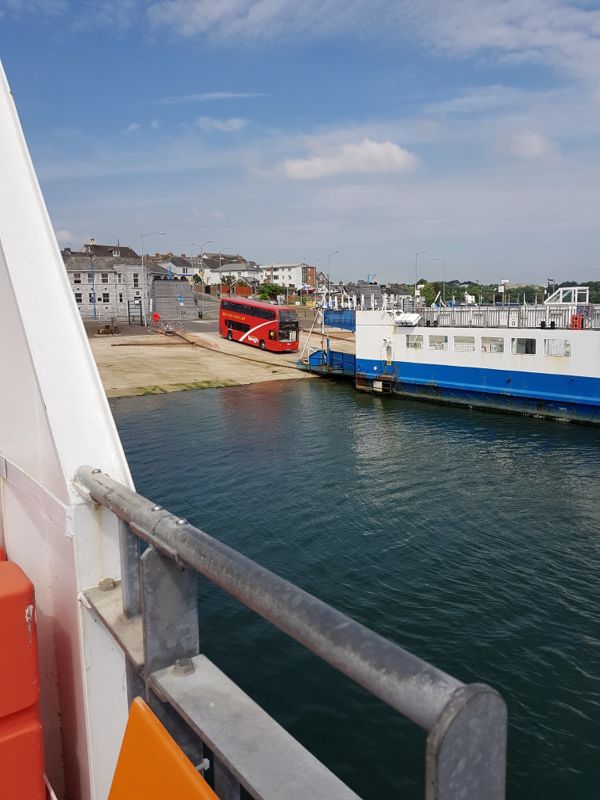 A passenger points to the chain at far side of our evacuated ferry. It lies slack and impotent on the slipway, in stark contrast to the perky virility of its twin on the near side. Broken, she says. Glad someone noticed, I reply 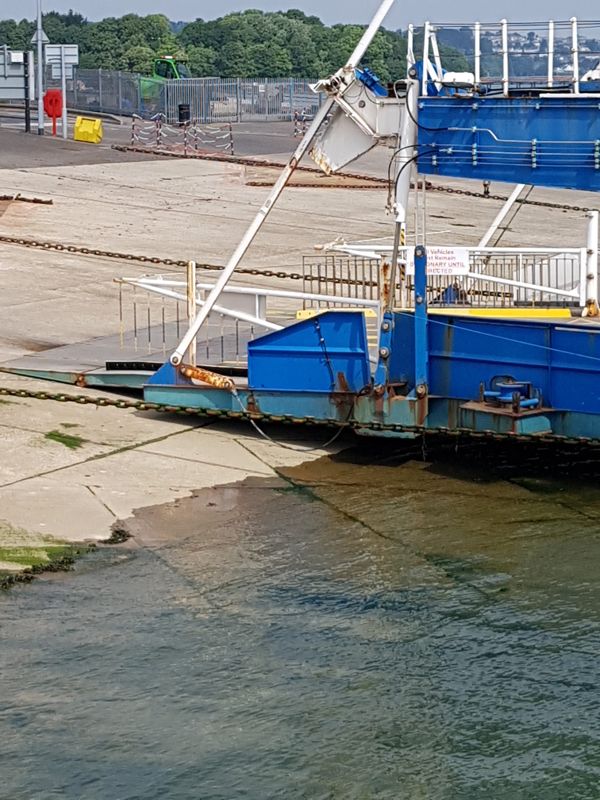 Here’s our bus. Was the driver simply playing it by the book when he gave me to understand I couldn’t leave my rucsack? 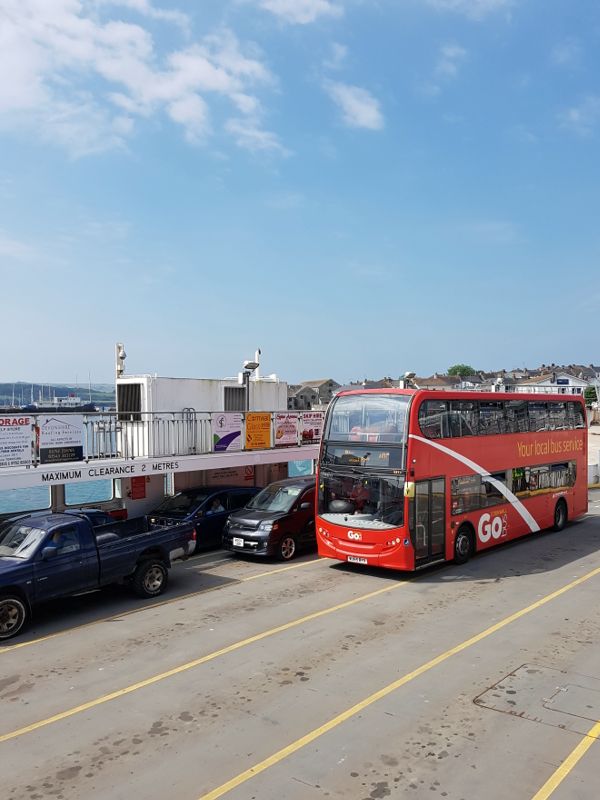 Getting scores of vehicles off a ro-ro ferry, all of them facing the wrong way, is no trivial matter. It’s well over half an hour before the substitute is fully laden for our five minute glide across the Tamar. I still don’t know what I’ll do in Plymouth. Walk on some? Probably not, but I haven’t completely decided when the phone rings. It’s Jackie.

Been trying to reach you all morning. Rhianna and I will be packed by three and looking to set off this afternoon rather than tomorrow. What are your plans?

I’m on my way! I’ll try to be in Bristol by three.

Bus from Plymouth to Totnes. Train from Totnes has me pulling into Temple Meads for three-thirty but no worries. J & R, still packing but confident of a tiny berth for me, issue instructions.

Wait at the station. We’ll pick you up in half an hour.

I offer to share driving but am happy to sit in the back, writing and uploading Day Nineteen as Jackie steers northward on the M5, eastward on the M42 and northward again on the M1. I’m back at Steel City House for eight-thirty pm on Saturday evening.