The FB exchanges below, originals here, are a little complicated but hardly rocket science. The posters – all of them – appear broadly to share my views on the West’s dirty war on Syria. Yes, all of them. That includes Rob Torito, who, by injecting a note of scepticism on the authenticity of a tweet attributed to Ken Roth, director of Human Rights Watch, draws the scorn of others: folk who, if they weren’t quite so excitable, would see he shares their scepticism (and mine) on the assumed neutrality of agencies like Human Rights Watch.

(While HRW aren’t in the same league of infamy as White Helmets they have form, alongside Amnesty International and Medicin Sans Frontiers, as useful idiots. Like George Monbiot and Owen Jones, their missives, regardless of intent or protestations to the contrary, provide ideological cover for western aggression to further aims – see for instance my last post on the Golan Heights – far removed from humanitarianism.)

Now see what you make of this … 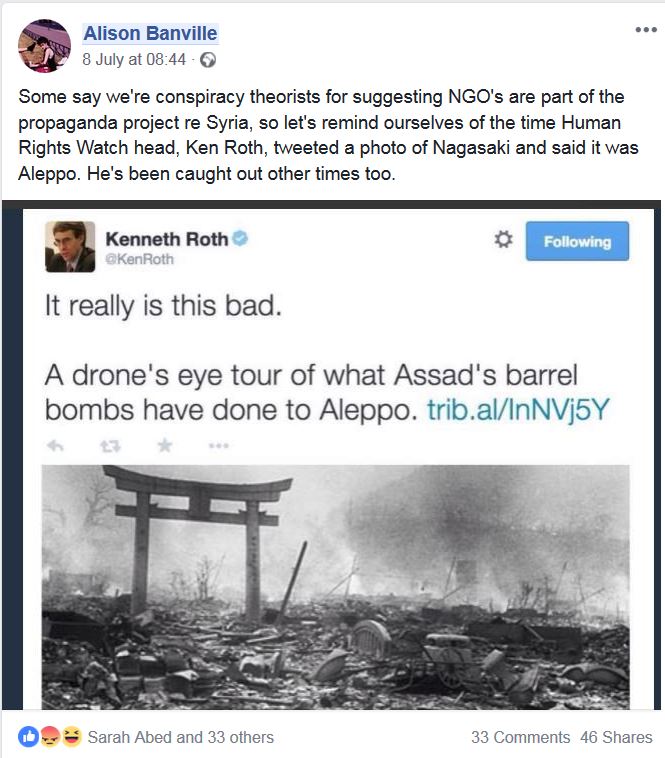 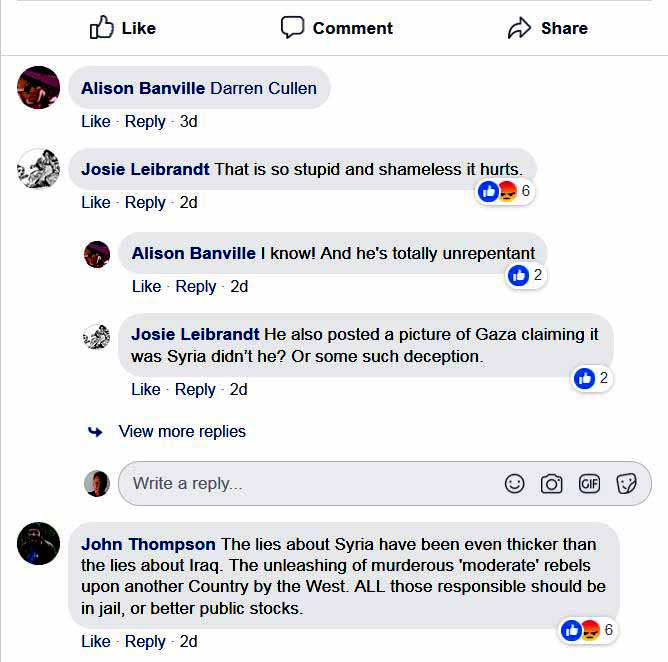 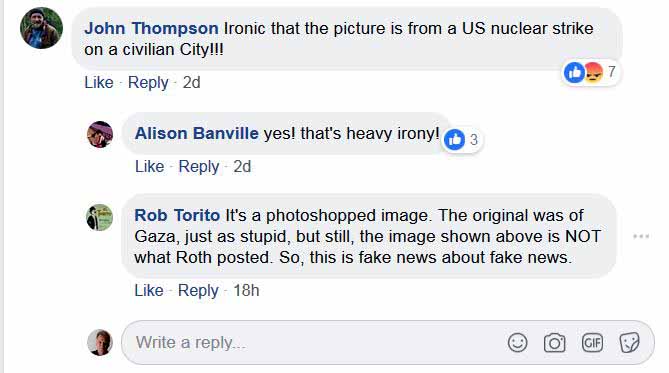 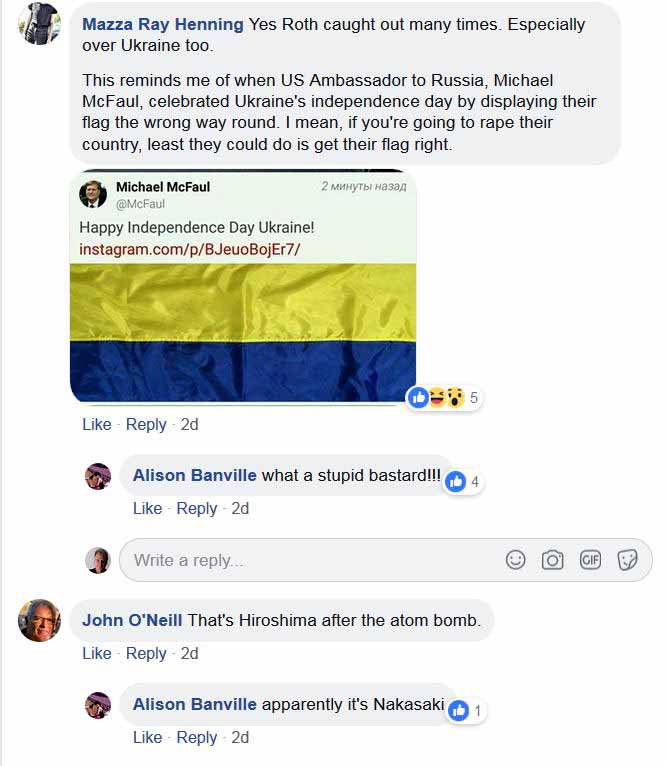 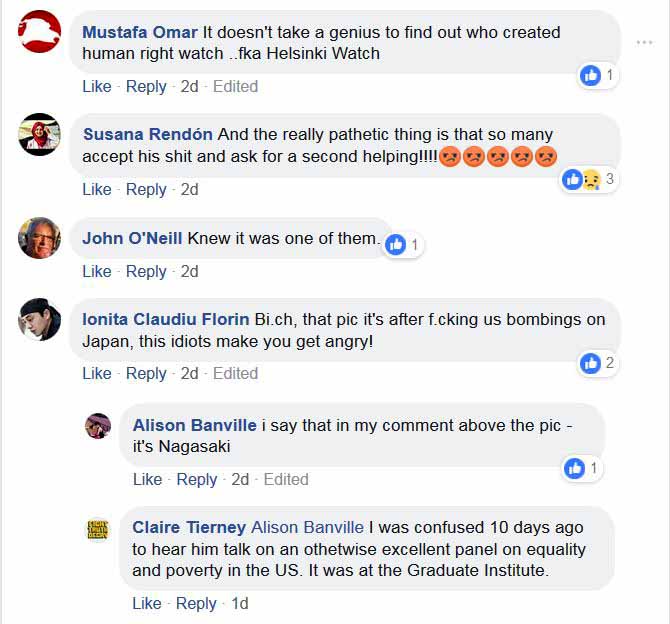 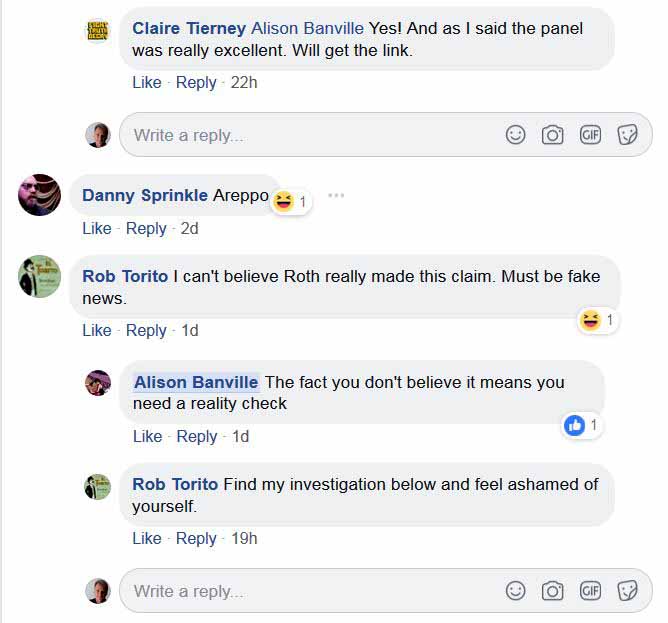 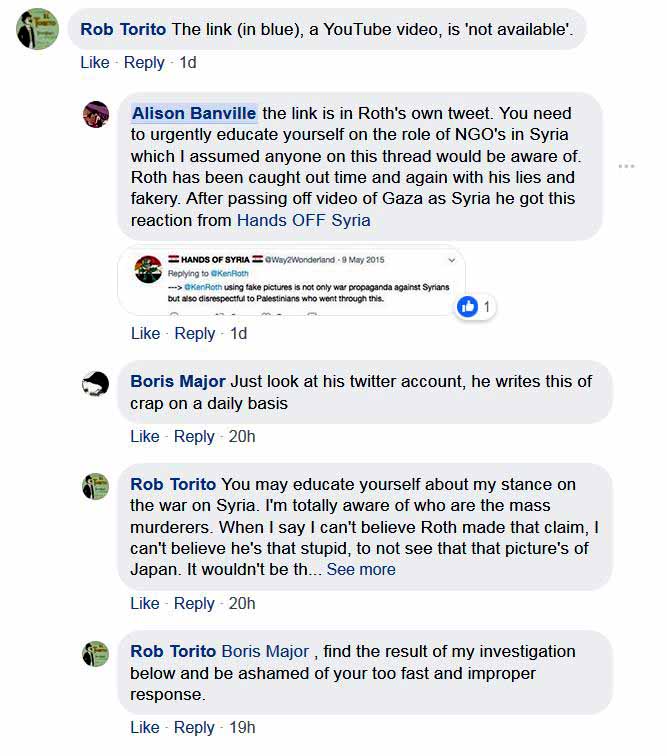 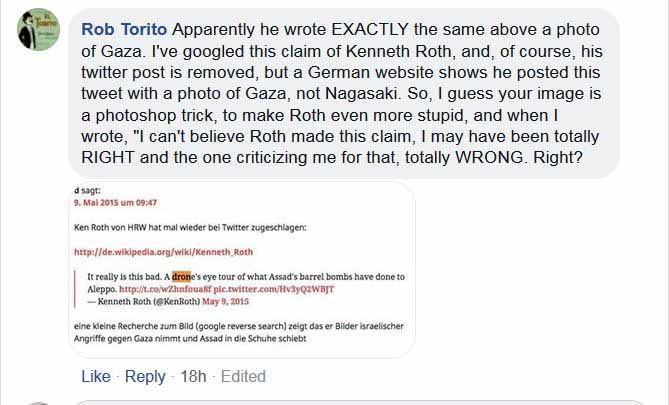 As you can see, Rob Torito is not defending HRW, nor does he subscribe to the mainstream orthodoxy on Syria. He simply voices doubt, which I share, that its executive director would be so stupid as to post a picture of Nagasaki, August 1945, and claim it to be Aleppo 2017. There is a whiff here, in his own words, of “fake news about fake news” – a rising problem in the smoke and mirror worlds of both corporate and social media. The confirmation bias, lack of critical scrutiny and knee-jerk attacks I can overlook. We can all pen without due care and attention, especially when Syria is the subject and Facebook the medium. In the same vein, that egoic intolerance of dissent – and capacity, when writ large, for subordinating truth to conformity – is in us all. For better and for worse it’s part and parcel of the human condition. But on reflection in cool light of day, don’t Torito’s critics owe it to him and themselves either to give reasons for rejecting his findings, else retract and say sorry?

Actually, that’s not an either/or. Even if they take the first route, and show that Roth did indeed act with such stupidity, a retraction is still in order. The conclusion Torito’s detractors draw – on no other basis than that he dares voice doubt on that particularity – as to his views on Syria in general was just plain wrong. I know: I took the trouble to check his post history, where a subtle clue, one of many, can be found in a post to the group, Hands Off Syria.

The extent of the deception on Syria, and the credulity of those who swallow it, is no excuse for mirroring those flaws ourselves. Our standards must be higher than theirs.

4 Replies to “Syria: our standards and theirs”