I’m not really a fan of Galloway – far less of Donald Trump – but yesterday George expressed my sentiments with ninety percent accuracy.1

But a facebook exchange today adds a little nuance to the picture. Here’s a snippet: 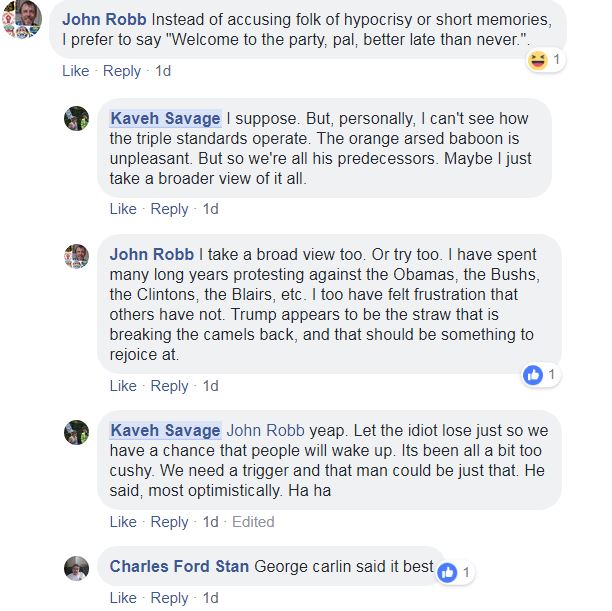 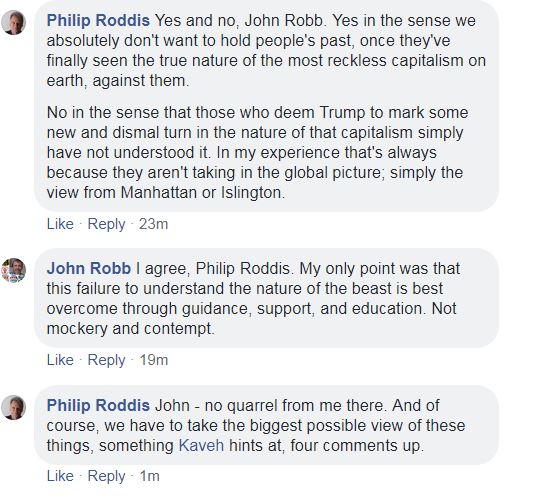 In that last comment I assume of course that Kaveh Savage’s “let the idiot lose” is either a typo or common spelling error; that he means “let the idiot loose”. It’s an extreme argument with obvious dangers when generalised, as when Germany’s left took the disastrously sectarian decision to draw no distinction between workaday capitalism and the nazis.2 But Trump, for all the hot air to the contrary, is not a fascist and has no such support base. We are living in an extreme world – witness the threats to our natural environment, string of wars on the middle east and alarming baiting of nuclear Russia (rising tensions, too, with China) and staggeringly dysfunctional levels of global inequality – a fact reflected by Trump’s victory over a crooked Democrat machine and large sections of America’s ruling class. Yes, reflected. Not caused by.

And that’s the point. Since Trump is reflection rather than cause, his buffoonery does create opportunities for deepening our critique of a morally indefensible and practically unsustainable economic system.

2 Replies to “I could not march because …”