Mist on the water, Saturday 05:30. Fellow camper materialises from dawn silence as I top up on H2O. Barely able to contain herself, she tells me – face lit up like Christmas morning, tones of hushed awe – she’s just seen an otter. Right here. 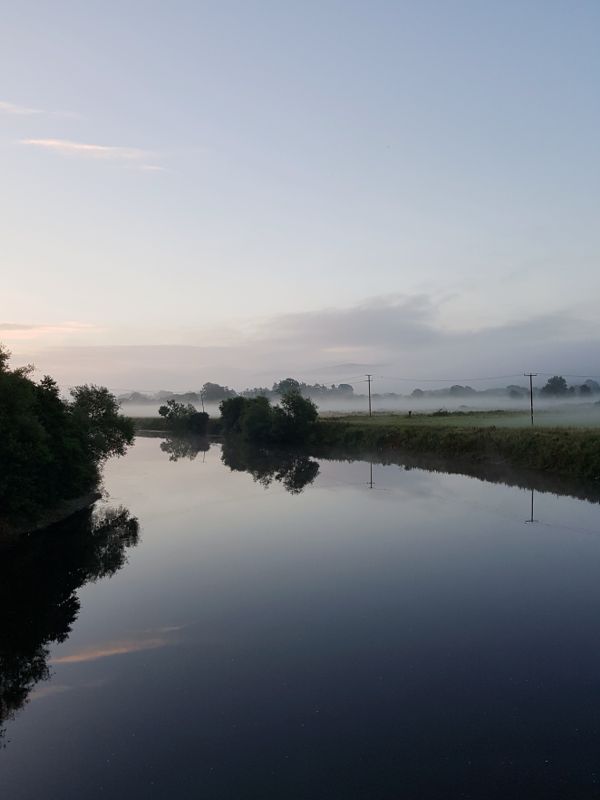 An hour later I bask in reflected glory, telling the next camper to rise I’ve seen someone who’s seen an otter. I hope it wasn’t just a mink, far less shy and far less discriminating in what it kills; otters its sole predator. I’m sure the red kites I’ve seen would cheerfully devour a mink – and the larger otter too – but till red kites master the art of  swimming underwater, neither cousin to the weasel need fear assault from the skies.

Recall the previous post’s cliff hanger. How did I get out alive from Deliverance-esque plight? I improvised and overcame of course, my doubt and despair short lived. Even with a good three quarters of my efforts at the foot pump going to waste, I reasoned, the other quarter must surely push air through the Boston valves and into the kayak.

An hour’s pumping got the two side chambers to 1lb psi (should be 1.5) but could I get enough pressure in the base chamber even to register on the manometer? I’d have  kept at it another hour given a scintilla of confidence it would up my gain, but I’d hit a wall: due I guess to that lowly 1 lb psi in the sides preventing more air entering on so feeble an inflow. I further deduced that to get past first base on the floor, I’d need to deflate the sides then reflate once said floor passed muster. No way was I up for that! I couldn’t rule out my labours worsening that rip in the bellows. What I had was what I had, and what I had would have to do.

In this manner did I limp, so to speak, the next ten miles downstream. So woefullly thin was the floor that not even the two inch cushion of air in a lung-inflated seat could stop my butt from registering every bump and scrape on the Wye’s many fast and shallow stretches. 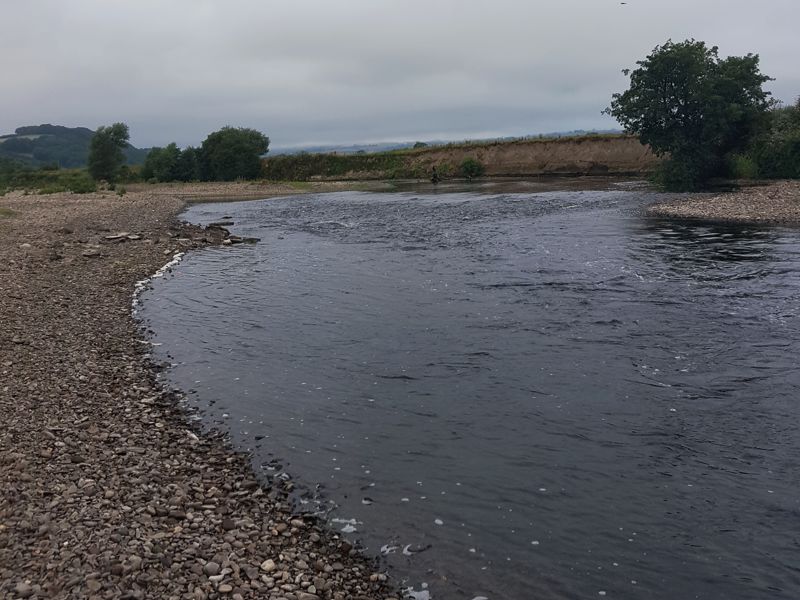 I had to get out at times, dragging the kayak like a recalcitrant canine over gravel beds, glad I’d had the foresight to purchase three metres of painter rope prior to larks on Windermere. With light draining from the sky, I’d wade forlornly to the edge of water deep enough: eight inches in current circs. (Four or five, I now know, given that all important 1.5 psi.)

It was near ten pm when I saw a bridge ahead. That’d be Whitney Bridge, its left bank marked by a well kept cottage – I’d snap it on the morrow – guarding the toll bar on the road to the Hay on Wye my wounded kayak and its anxious skipper had drifted past two hours earlier. It’s the home and livelihood of Pete, who every year takes his wife and teenage son whitewater rafting in Thailand or Nepal. 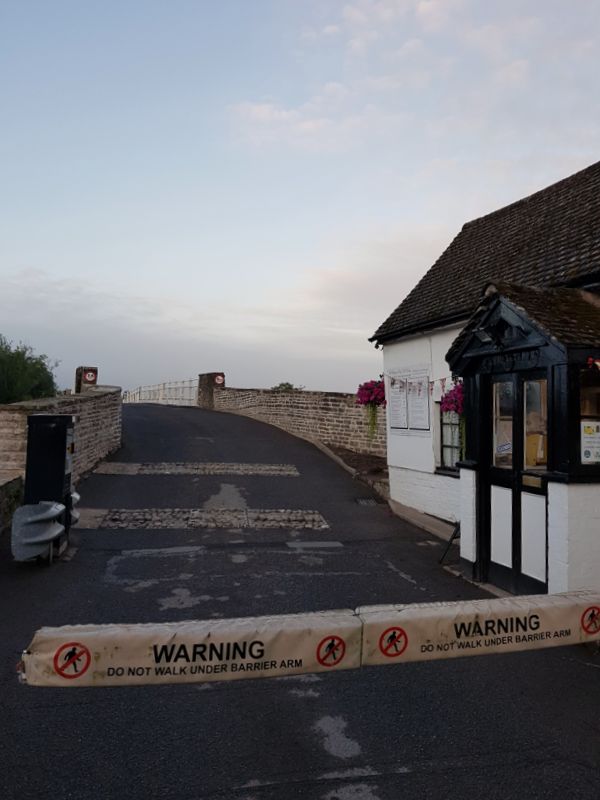 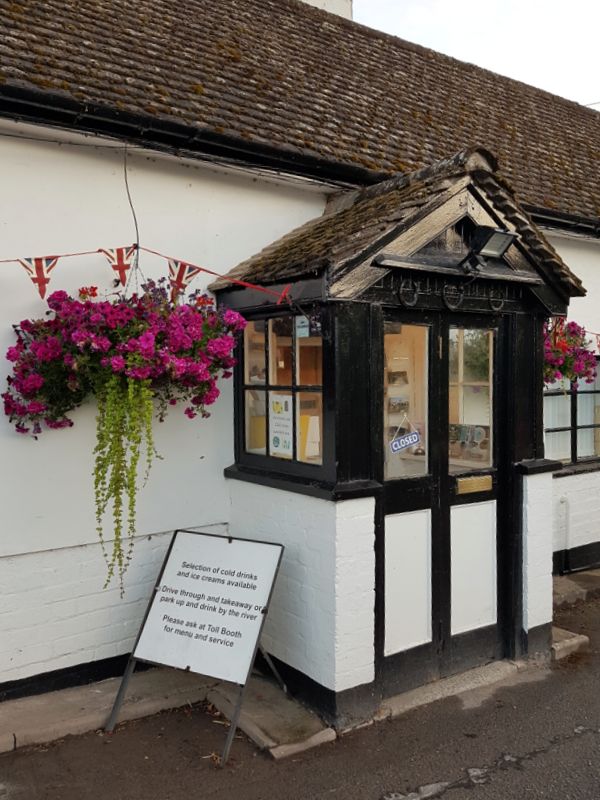 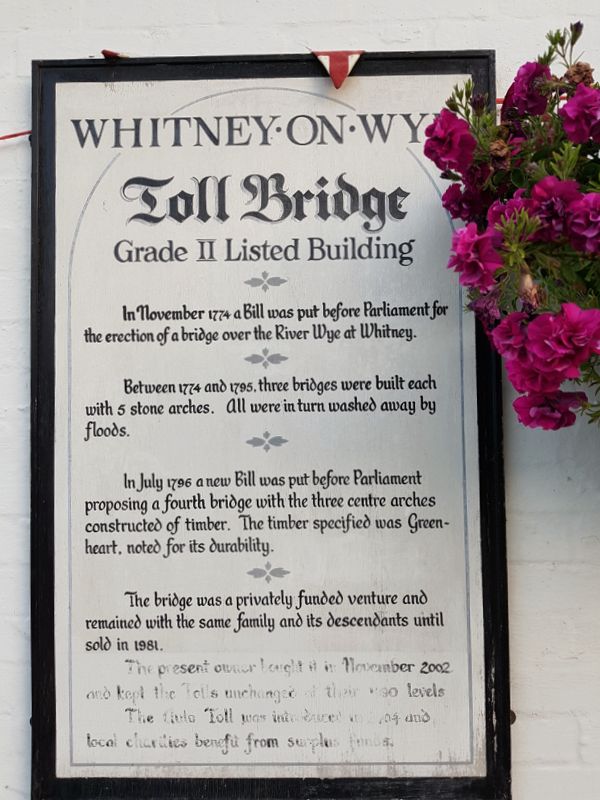 Not that I knew or cared about Pete’s or anyone else’s shooting of Asian rapids, the way things stood at ten pm on Thursday. All I cared about was the stone landing point, fifty yards upriver from bridge and toll cottage, its steps up the steep bank leading to a sign that told of canoe campers being welcome. Which in turn spelt not only much needed rest in the here and now, but freedom in the morning to shower at leisure, then leave my gear to hitch or bus to Hereford – nineteen miles hence says a road sign close to the cottage, though it’ll be far more by kayak – for a new pump. With no one around to say yea or nay, I hauled cargo then folded trolley up the steps, followed by kayak and – with just two other tents and a van on an attractive strip of tree studded grassland two hundred yards by seventy – pitched tent and laid one weary head. Other than floss and brush, my sole remaining task was to up-end das boot  for a torchlit inspection.

In the event, I’d no need of Hereford’s pump wallahs. Presenting myself at the toll cottage in the morning, I paid £8 for that first night and, noting a forecast of rain between three and nine pm (accurate to the minute, as I was to discover) another £8 for a second. I then asked Pete, splendid fellow, about buses to Hereford. When I told him wye he dropped whatever he was doing to rummage in his outshed, bidding me to fret not and leave him to it. An hour later, he turned up at my tent, brandishing foot pump in perfect working order. I wanted to kiss him but we English don’t do that sort of thing. I doubt I thanked him more than two dozen times. 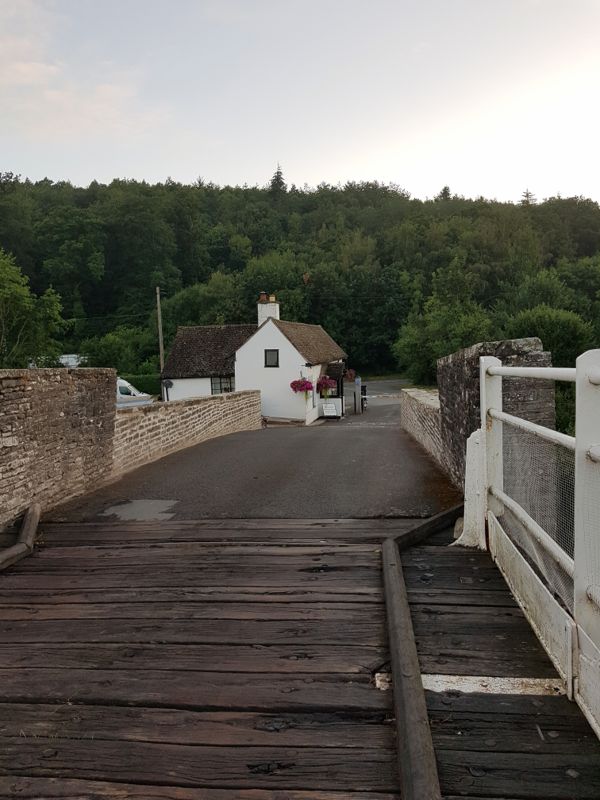 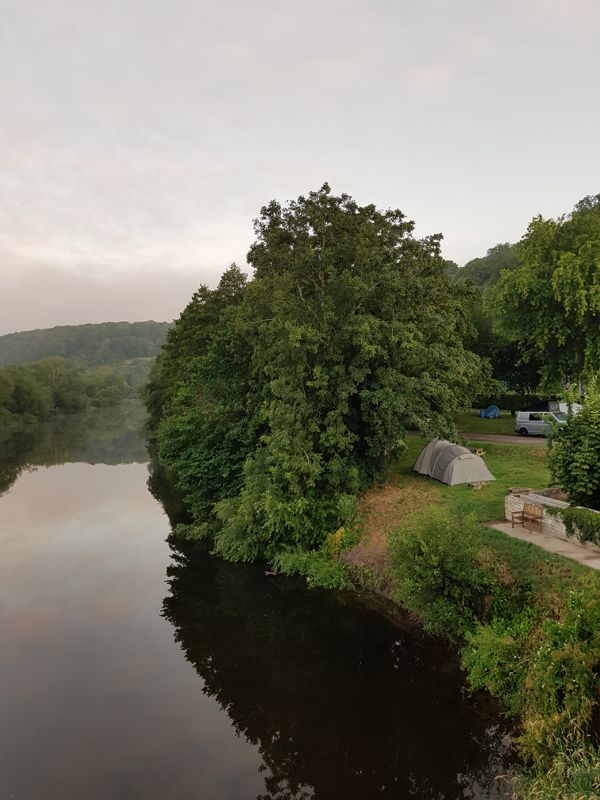 With Boat Inn not half a mile down the road – landlord a mine of info on local fauna, otters included – and a pretty church to meditate in, my one day and two nights on dry land did not drag, though an eight mile round walk by road to Hay was thwarted a mile and a quarter in by intensifying rain. I’d forgotten what the stuff looks like. Even the hours of wet weather tent confinement went tolerably well, given a halfway decent Ed McBain on my Kindle. 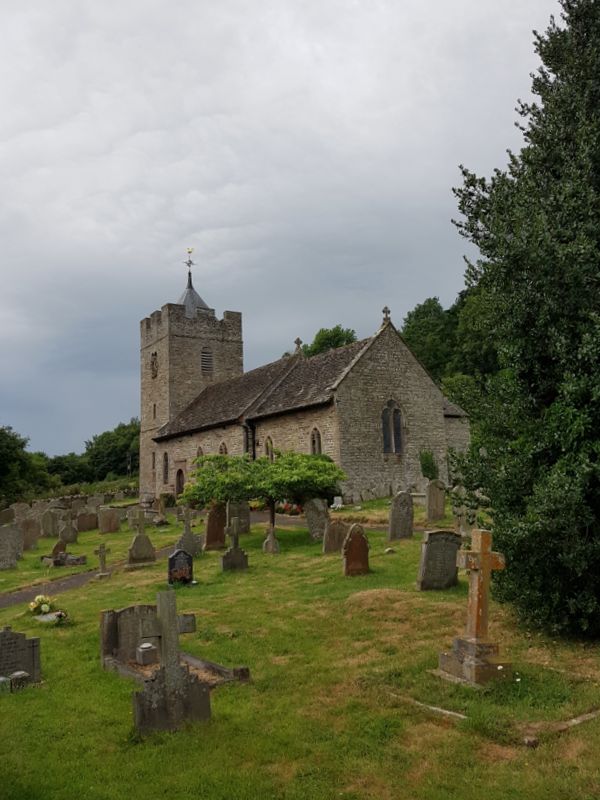 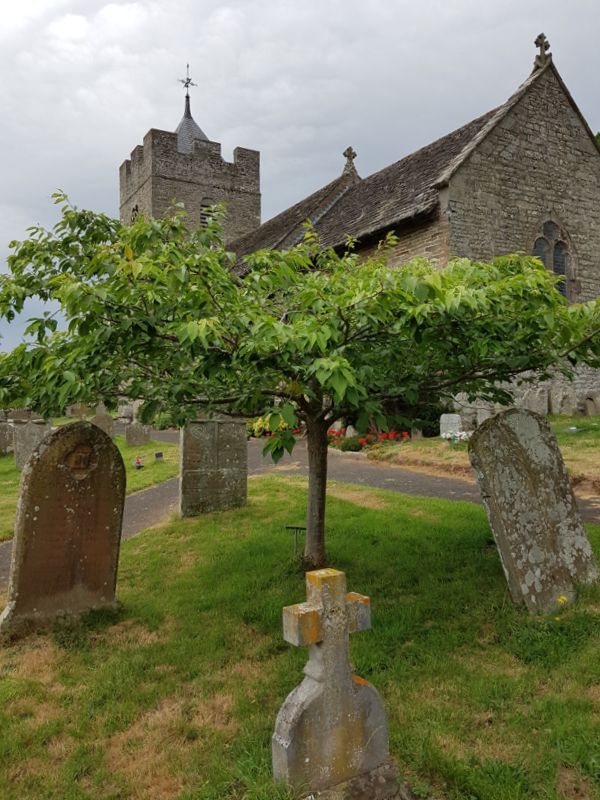 And so it came to pass that on the Saturday I bade my otter spotter farewell – no Pete in sight, alas – to set off just before seven am. With fire in belly, lead in pencil and one-point-five pounds per square inch in all three chambers, I slipped between the stone piers propping up the timbered central section of Whitney Toll Bridge to resume my journey to Ross on Wye, by way of Hereford, down a watery highway with more looping twists than a sidewinder … 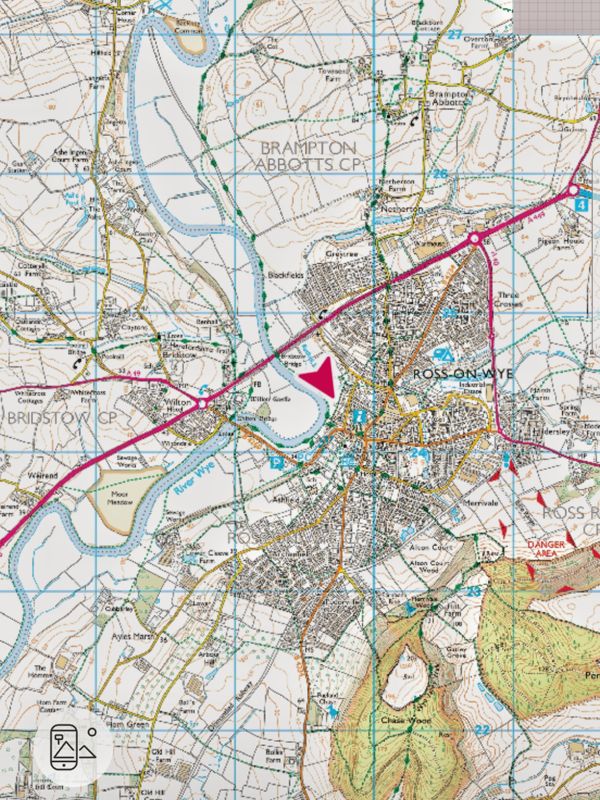