I was today re-reading Prof Tim Hayward’s excellent FB post from back in April, How We Were Misled About Syria: George Monbiot of The Guardian. I say ‘excellent’ not only because I get a few mentions – black mark, Tim, for describing me as  from America but buy me a pint and we’ll say no more about it, eh?  – but because it sums up precisely, though in greater detail, my own sentiments. To those for whom George can do no wrong1 – and I still have time for him on subjects other than Syria – I heartily recommend Tim Hayward’s post.

But one thing leads to another, and after that re-read I thought to check on Monbiot’s twitter page. Sure enough, he’s been at it again; expressing just a few days ago his (disingenuous) incredulity at saps like me: 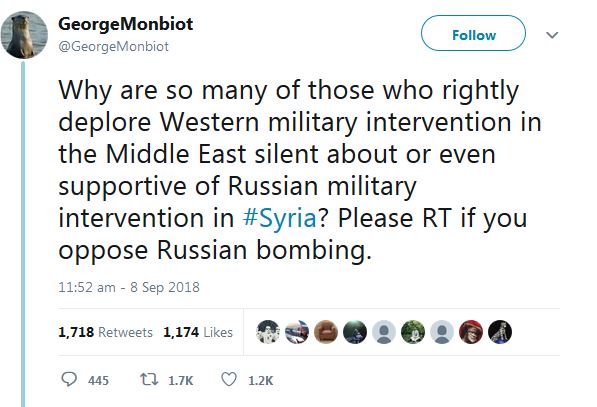 And in the unlikely event you hadn’t already clocked this, I’m at the basket case end of those targeted for George Monbiot’s scorn. I am not in the silent about  but the supportive of  camp when it comes to a Russian intervention which has so far stopped Syria going the way of Iraq and Libya.

To those who swallow the official Western line on Syria and on Russia – not least because they remain, not always consciously, in the grip of a deeper and broader false narrative on Western Values2 – Monbiot’s swipe at double standards has superficial plausibility. But not everyone is buying. Several replies to his tweet make accurate observations on the difference between a Russia invited in by the lawful government of a secular state besieged by Islamist terrorists funded by your taxes and mine, and a USA whose disastrous wars on the middle east have been motivated, as has become abundantly clear to those with eyes to see, by interests far darker.

All good stuff, but top prize goes to the wittily incisive Caitlin Johnstone for this response …

… and, a little further down the thread, this response …

I haven’t had the pleasure of meeting Ms Johnstone but, if and when I do, it’ll be my shout at the bar.

2 Replies to “Caitlin on Monbiot”