Losing my way on a review of Ken Loach’s superbly crafted and acted, Sorry We Missed You, I took time out to post this FB screen grab under the header, First They Came for Assange:

An ensuing BTL exchange led to this current post. On so many fronts we are sleepwalking into totalitarianism. We are filmed a hundred times a day; an act slyly justified by its contribution to catching seriously bad guys in the crime dramas, also superbly crafted and acted, we consume night after night from the safety of our sofas.

Our calls are eavesdropped, our emails and social media outpourings hoovered up in the name of the War on Terror; our whereabouts minutely traceable through the phones we’re addicted to, and through the most banal of purchases in an unstoppable drift to the cashless economy.

But, hey, it’s all OK! Ours is an open, pluralistic democracy, right? And trust me: our finely tuned t-detectors can sniff totalitarianism a million miles away. As for that Michael Rosen poem, well, that’s just a bit of harmless sounding off, innit? 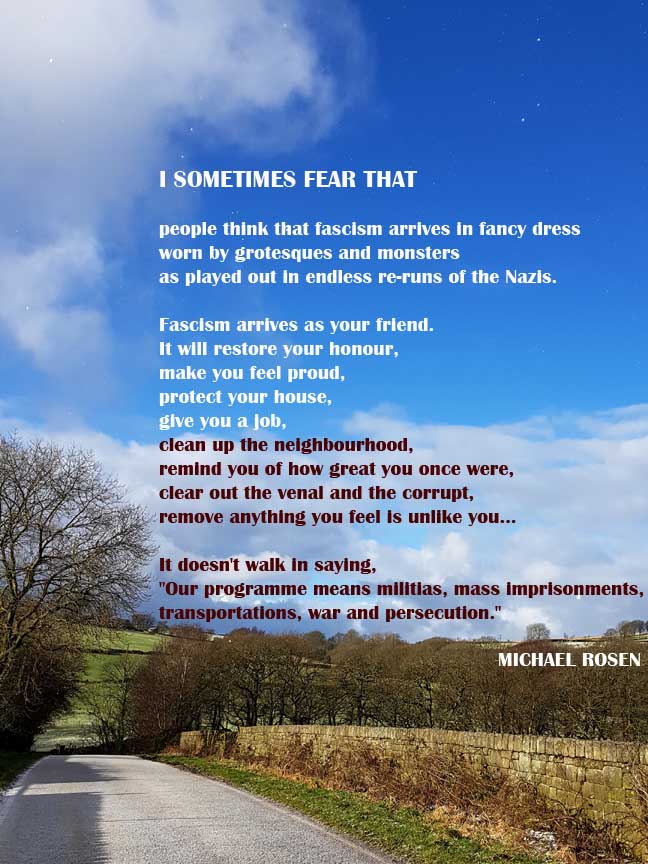 Seeing no reason why Julian should ever be forgot, I was at the Assange protest in front of the  Home Office on bonfire night. Vivienne Westwood and Julian’s father spoke. Rapsters Lowkey and MIA did their thing. Pity I couldn’t make the October rally at the same venue – me being a Pink Floyd fan for fifty years, man and boy, and Roger there to do Wish You Were Here – but I’m reliably informed that John Pilger was eloquent as ever in front of a thousand protestors.

Not a bad turn-out, that, given a media blackout. That’s right, not one of our mainstream media wrote a word, before or after, about either of the two Marsham Street protests so far. Not even as celebrity tittle-tattle. So much for that cornerstone of the Open Society, the fourth estate.

Or as some say, ForTheState …

Why the silence? For me one of the most dismaying aspects of this is the way identity politics and appeals to liberal/progressive values are servicing reactionary ends. Witness the selling of social media censorship as a fight against ‘hate speech’.

Witness use of the antisemitism card as the most successful line of attack, up there with Brexit, on Jeremy Corbyn. Witness the role played by the Guardian – wallowing in the gutter with Luke Harding’s Manafort lie and the sheer nastiness of Suzanne Moore’s “massive turd” sideswipe – in seeing to it that a liberal intelligentsia which should have been Assange’s most dependable support base fled for cover faster than you can say Jeffrey Epstein.

This appeal to progressive values has been a boost too to the ideological arm of imperialism’s regime change frenzy in the middle east. Not only has it muted both liberal and far left protest at millions slain and incubation of salafist terror in Iraq and Libya. It has also aided the selling, Russia having called time on regime change there, of Syria’s balkanisation.

To the liberal mind the empire’s Plan B of controlling Syria through an ‘autonomous Kurdistan’ is just too much to take in. Far easier for that mind to grasp is that Rojava promised, before the Donald pushed the YPG into a deal with Moscow and Damascus, all it has been conditioned to hold dear: a sunlit upland of nice Kurds, nice co-ops and, nicest of all, feminism unplugged.

For my own take see the final paragraphs of a recent post, The Kurds in Syria.

Let me close with Julian – and Chelsea and Ed – very much in mind, by putting to you the reader a few brief questions.

I mean, it’s all very well telling ourselves we live in a free society. But how would we know the truth of that if we never put it to the test?

One Reply to “Identity politics: the new totalitarianism”