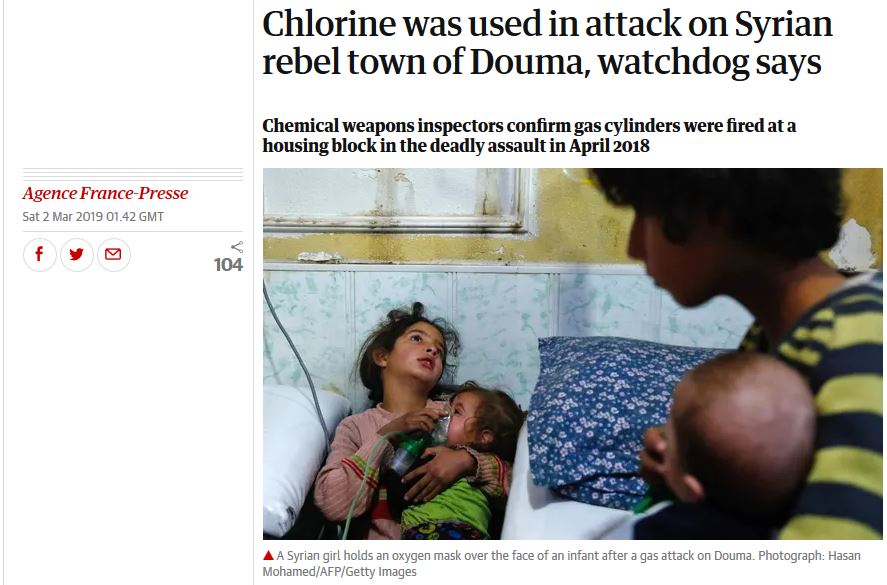 I suspect the Third World War will begin with a claimed atrocity — probably the use of poison gas by a ‘regime’ against ‘its own people’. Such things are now the favorite way to make wars where there was peace … democracy needs a popular pretext for war, and righteous mass outrage about the inhumanity of the enemy is almost invariably effective.

This is why it is rather important that the people we trust to verify such claims are honest and trustworthy. For who will verify the verifiers? Ignore this little matter and we could obliterate the world by mistake, sooner than you think …

[On] April 7, 2018 … social media, quickly followed by professional news organizations, began to spread harrowing reports of mass murder by gas in the Damascus suburb of Douma. Many deaths were reported. Urgent amateur films then appeared showing the dead, horrible to behold, some of them children, many foaming at the mouth. President Trump reacted swiftly, Tweeting ‘Many dead, including women and children, in mindless CHEMICAL attack in Syria. Area of atrocity is in lockdown and encircled by Syrian Army, making it completely inaccessible to outside world. President Putin, Russia, and Iran are responsible for backing Animal Assad. Big price to pay. Open area immediately for medical help and verification. Another humanitarian disaster for no reason whatsoever. SICK!’

In fact he did not wait for verification. Within a week, the USA had showered Syria with missiles crammed with high explosives. France and Britain swallowed any doubts they may have had and added their small salvoes, in the usual coalition of the sycophantic.

But then the problems began. It is actually illegal to bomb sovereign countries unless you have a clear justification. And nobody really knew what had happened in Douma. There were no independent Western sources there at the time of the alleged atrocity. They would have been killed or kidnapped if they had been, by the notoriously feral jihadi militia, Jaysh al Islam, which then held the area. The journalists who wrote so confidently about it were in no cases nearer than Beirut, 85 miles away. More of them were even more distant, in Istanbul, London and New York. The sources they quoted from the scene were unnamed and uncheckable …

2 Replies to “Peter Hitchens on Douma”