Caitlin Johnstone today on the Rogue State’s refusal to leave:

If the initial invasion of Iraq was a violent sexual assault by a stranger in a dark alley, this one is more like an abusive husband raping his wife then making her cook him dinner.

Later, she notes the US State Department’s response to Iraq’s demand:

America is a force for good in the Middle East. Our military presence in Iraq is to continue the fight against ISIS and as the Secretary [Mike Pompeo1] has said, we are committed to protecting Americans, Iraqis, and our coalition partners. We have been unambiguous on how crucial our D-ISIS mission is in Iraq. At this time, any delegation sent to Iraq would be dedicated to discussing how to best recommit to our strategic partnership—not to discuss troop withdrawal, but our right, appropriate force posture in the Middle East. Today, a NATO delegation is at the State Department to discuss increasing NATO’s role in Iraq, in line with the President’s desire for burden sharing in all of our collective defense efforts. There does, however, need to be a conversation between the U.S. and Iraqi governments not just regarding security, but about our financial, economic, and diplomatic partnership. We want to be a friend and partner to a sovereign, prosperous, and stable Iraq.

I’ve written myself, here for instance, on the demonstrable truth that defeating ISIS is not the priority of America and its junior partners in the middle east. Far from it. As part of his broader geopolitical analysis after the murder2 last week of General Muhammad Soleimani, political economist Michael Hudson makes the case that since Vietnam, Western “democracies” have been constrained in their ability to wage imperial wars premised on massed ground forces.

Rather, they must rely on overwhelming air supremacy (which is why Russia’s 2016 intervention in Syria was a game changer). And on regional proxy forces – Islamists absolutely included.

For her part, Caitlin sticks with the rape theme:

Just as a side note, if you ever find yourself in any kind of relationship with someone who violates your personal sovereignty in this way and then uses the sort of I’m-your-friend, this-is-for-your-own-good language used by the State Department above to justify it, run, don’t walk, out the door. Because you’re dealing with a full-fledged sociopath.

Speaking of sociopathy at its most deranged and delusional, click on this image for a gem of  Alice in Genocidal Wonderland reasoning … 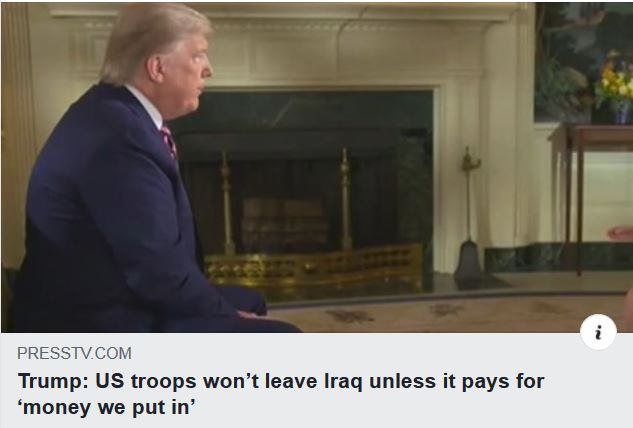 3 Replies to “Caitlin on the rape of Iraq”