Skip to content
I’ve been much impressed of late by the writings of Lindsey German, former leading light in Britain’s Socialist Workers Party. An outstanding communicator, most recently on Brexit and the Corbyn phenomenon, she is author of several books including ‘Material Girls: Women, Men and Work’, ‘Sex, Class and Socialism’ and ‘How a Century of War Changed the Lives of Women’.

On the Covid-19 crisis, should you doubt the danger, try this from an NHS doctor or this epidemiology primer in the medium. In the meantime, here’s Lindsey on COVID-19. 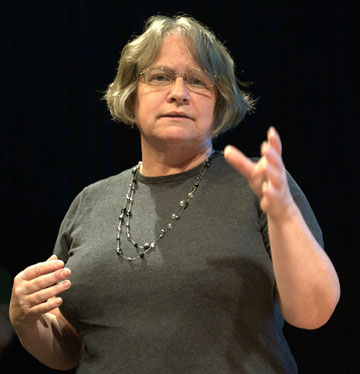 This is one of the biggest crises of our lifetimes – at least for those in the richest countries in the world. Society is going to change in all sorts of ways that we never predicted or expected even a couple of months ago. The real question facing socialists is how will it change and who will be the people in control of what happens?

Already the Coronavirus pandemic has demonstrated some of the best and the worst of existing society. Worst includes the response of the British government, which glibly announces that lots of our loved ones will die because the virus will be allowed to spread in order for us to develop ‘herd immunity’. It also includes the profiteering endemic when faced with shortages, the wilful underfunding of health systems which mean far more will die than would otherwise have been the case, and the employment practices which effectively make insecure workers choose between themselves or others staying free of infection, or paying for rent and food.

Among the best has been the selfless care and hard work of healthcare professionals, the local community networks which are springing up to help those ill or self-isolating, the neighbours, friends and families who offer to help, the workers who have taken action to ensure their own safety and those of others.

It is one of the most basic human characteristics that we work and cooperate with one another. One of the main barriers to this happening is not individual greed or selfishness but the whole system based on private profit and the market, which puts a price on everything, and requires that we work to increase that profit, not for the good of humanity.

The government approach is steeped in its glorification of the market. It has dragged its feet on closing sporting fixtures – let alone shutting bars and restaurants – because it fears the impact on the economy. Its attitude to school closure is similar. And it takes its methodology from the nudge theory of behavioural psychology, which has an elitist attitude towards how it thinks ordinary people, ‘the herd’, behave.

It has found itself wrongfooted even by the Premier League, the Electoral Commission and individual universities, all of whom have taken it into their own hands to close down operations to prevent the spread of Coronavirus. The government will be forced to follow with further closure, including of schools and public areas, but they will do so grudgingly, slowly and with little concern for the consequences.

Protecting the many from the few

Such closures are right but will come at a great cost to individuals. At present, there are few affordable and safe childcare facilities if schools close. Children from poor families often depend on food obtained at school. Workers stand to lose some or all of their incomes, depending on their employment status. Those in precarious or irregular employment are already being told there is no work – and no pay. Millions will soon find themselves in this situation, and many small businesses will also be under threat. In a city like London, so many of these are consumer-oriented and already struggling and if people stay indoors, as they should, will have few resources to stay open or pay staff.

The government should guarantee not only sick pay – on at least double existing levels – for all who need it from day one, regardless of employment status. It should also guarantee grants for small businesses, rent and council tax suspension, lay off pay for everyone who needs it. Many of these workers may be migrants – often workers described as unskilled – but who do a vital and increasingly important job cleaning, caring for the old and sick, providing food. They should be guaranteed an income and freedom from any harassment over their status.

Private hospitals should be requisitioned for beds and equipment to help the beleaguered NHS and adequate resources should be channelled into healthcare. Private medicine already receives many hidden subsidies from the NHS and government, and we should not be paying them for the use of their beds. Industry should be focussed on providing medical equipment, ventilators, drugs, hospitals and other essentials to fight this virus. Those who need care or provisions at home should be served by voluntary and professional networks to ensure that children still receive school meals, the old, sick and disabled are cared for and given adequate supplies.

This all will cost money and will be bitterly opposed by the government. The money is always there for wars and for bailing out banks, and it can be found to combat the virus and to ensure that no one suffers more than they have to in these circumstances. That in turn raises political questions – why is this sort of money never used to alleviate human misery but always to benefit the priorities of the rich and powerful?

Indeed Virgin Airlines has already demanded government subsidy – a real cheek from Richard Branson who recently sued the NHS – and many more will follow. We cannot allow a repeat of the 2008 bank bailout where the richest companies received handouts when their employees and customers went to the wall. Money should go to preserve jobs and pay workers, and to ensure safe environments, not to smooth the paths of some of the richest people in the world.

The truth is that the ruling class internationally cannot be relied on to deal with this crisis, precisely because of these priorities. Instead of showing humanity to those suffering most, it introduces more barbaric laws and methods – closure of borders, scapegoating of migrants, tightening laws and abandoning civil liberties, demanding more repressive measures. It will do nothing serious to stop profiteering and it is not capable of trying to organise society on a truly cooperative basis.

Despite the many myths about Britain’s role in the Second World War, which Johnson is fond of harping on about, its ruling class was criminally negligent in its preparations for war and its treatment of the civilian population. It refused to build the deep shelters which could have protected from air raids, it built shallow trenches in parks which were useless, it refused to arm its citizens in the face of likely invasion, and it was popular agitation – led by the Communist Party – that led to the opening up of tube stations as shelters. These and other measures did not come from Winston Churchill, still less from those Tories still attempting a deal with Hitler, but from ordinary working people who both recognised the threats and came up with solutions to them.

Organising in a society out of control

The same is true today. The coronavirus pandemic and the other existential questions that face us can only be answered properly through, as the saying goes, ‘system change’. This can only be brought about by working people, organised to present an alternative to the anarchy of the market and the dictates of capital. How we do that can determine not just what happens in the next few months – vital though that is – but can have much more far-reaching consequences for us all. So far the response from the unions and from Labour has been partial and far short of what is required. It needs to be stepped up. The unions have to fight for the sorts of demands I talked about above but also to ensure that working people and the poorest are not the victims of this situation, and that all working people – regardless of race, nationality or status – are treated equally.

Labour cannot go along with Johnson’s approach with just a few gentle queries. A right-wing Tory government with a social Darwinist as its main adviser is not going to be persuaded into treating us all better – it will use the crisis to further its own ends. Labour has to provide a real alternative, but given the lacklustre leadership debate, the future once Jeremy Corbyn goes does not look particularly bright.

This is not just due to the abilities or otherwise of Keir Starmer, the likely winner, it is also to do with Labour’s nature as a party, which is about ameliorating the existing system rather than changing it completely. The fear of society getting out of control and going in ways that no one had predicted, strikes fear into the hearts certainly of right-wing Labour, and makes many MPs cautious. But society is running out of control anyway after decades of neoliberalism and it is becoming all too obvious that we need drastic action to change it.

Already millions of lives in China, in Italy and many other parts of the world are changing fast because of this crisis. Many people are rising to the challenge in all sorts of innovative ways. Even major commercial institutions like opera houses and concert halls are streaming music free rather than have mainly rich people pay to get tickets. People are finding that their workmates, neighbours, fellow students are all combining together to support those less able to do so. Health workers are making huge sacrifices to save lives.

The left within and outside Labour needs to rise to the challenge here. Working class people have an interest in building a very different sort of society, one based on production for need, not profit.

This is reproduced from the version on CounterFire, where you can sign up to get Lindsey German’s weekly posts. Also worth a read is today’s WSWS piece: US capitalism’s response to the pandemic: nothing for health care, unlimited cash for Wall Street