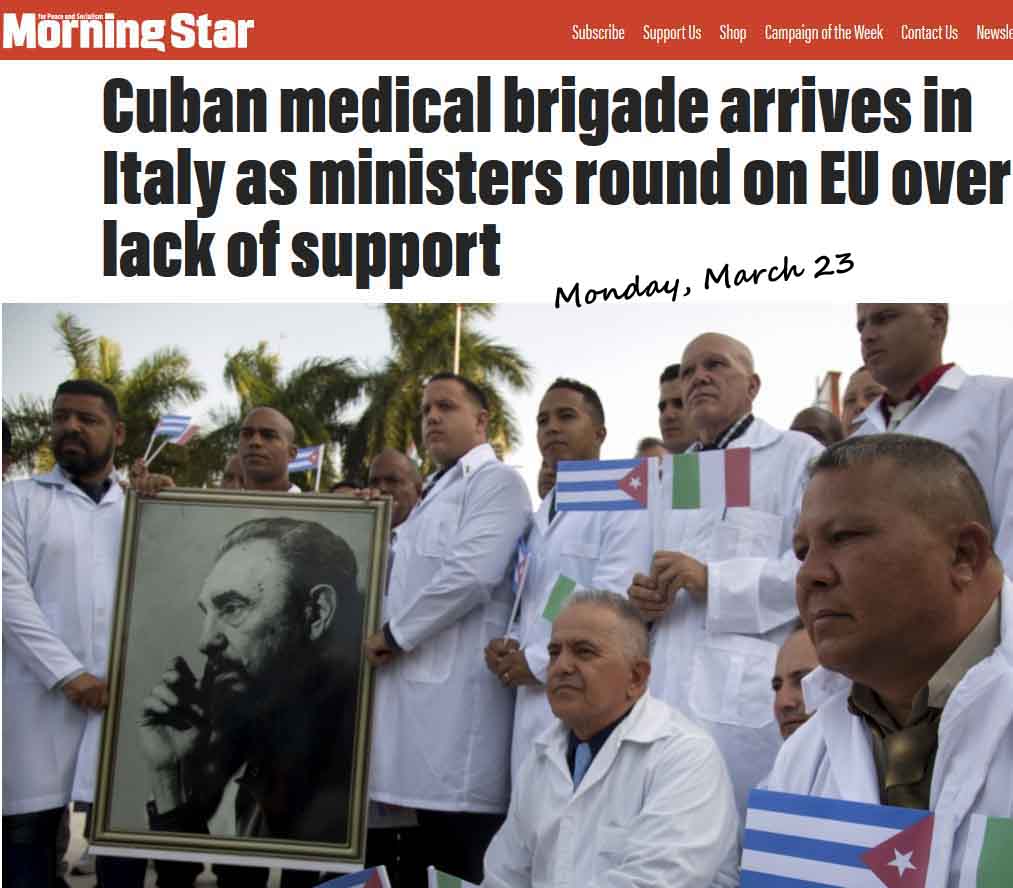 A CUBAN medical brigade arrived in Italy at the weekend, the sixth dispatched to assist other countries with the coronavirus pandemic.

We are all afraid, but we have a revolutionary duty to fulfil, so we take out fear and put it to one side. He who says he is not afraid is a superhero, but we are not superheroes, we are revolutionary doctors.

Chinese medical missions and planeloads of medical kit have already been sent to Italy and on Sunday Russia agreed to send military medics and special disinfectant vehicles.

The crisis has led to sharp criticism of EU lack of solidarity with affected member states. Italian and Bulgarian ministers have complained that their countries receive more help from non-EU states than within the bloc.

We must have the courage to put in place a common and co-ordinated budgetary policy capable of supporting the effort of our health systems.

But Bulgarian Defence Minister Krasimir Karakachanov said the crisis showed that the EU does not work for its members.

It turns out that the only institution that works for the benefit of citizens in Europe is not the expensive European bureaucracy but the nation state. The EU has not sent a single mask. We get help from China, from Turkey.

In Serbia — not a EU member — President Aleksandar Vucic struck a similar note as he met a Chinese shipment of medical supplies arriving at the airport.

I believe in China’s help. European solidarity is just a fairy tale.

In Beijing, Foreign Ministry spokesman Geng Shuang said Chinese aid was natural, given that China had help from more than 80 countries when its own outbreak — now largely contained — was raging. “You throw a peach to me, and I give you a white jade for friendship,” he said, quoting from the ancient Book of Songs, a collection of poems from the eleventh to seventh centuries BCE.

See also this piece on Western media downplaying China’s efforts to save our lives. For the why of that see Stephen Gowans piece today. It begins:

On March 22, The Wall Street Journal’s Michael R. Gordon reported on how “Marines plan to retool to meet China threat.” What Gordon refers to as China’s “threat”, turns out to be the threat of China being in a position to defend itself. Here are annotated excerpts from Gordon’s article.

“[Over the past decades] China and Russia worked on systems to thwart the American military’s ability to assemble forces near their regions. … If war broke out … China could … keep U.S. warplanes at bay.”

“Russia similarly would use the surface-to-surface missiles, air defenses and antiship missiles deployed in Kaliningrad and on the Crimean peninsula in the Black Sea.”

“The Chinese and Russian advances [in self-defense] led the Pentagon to conclude that the U.S. was entering a new age of great-power conflict [which is to say, an age in which the US would no longer be able to easily dominate China and Russia militarily.]”