As Emeritus of the Johannes-Gutenberg-University in Mainz and longtime director of the Institute for Medical Microbiology, I feel obliged to critically question the far-reaching restrictions on public life that we are currently taking on ourselves in order to reduce the spread of the COVID-19 virus.

It is expressly not my intention to play down the dangers of the virus or to spread a political message. However, I feel it is my duty to make a scientific contribution to putting the current data and facts into perspective – and, in addition, to ask questions that are in danger of being lost in the heated debate.

The reason for my concern lies above all in the truly unforeseeable socio-economic consequences of the drastic containment measures which are currently being applied in large parts of Europe and which are also already being practiced on a large scale in Germany.

My wish is to discuss critically – and with the necessary foresight – the advantages and disadvantages of restricting public life and the resulting long-term effects.

To this end, I am confronted with five questions which have not been answered sufficiently so far, but which are indispensable for a balanced analysis …

The five questions put by the highly cited1 Professor Bhakdi to Angela Merkel, and why in lay terms they matter, can be read in full via the German and English links supplied above. For those pressed for time, here’s my summary:

If the five points appear to lack orthogonality in my summary, that’s in all likelihood because I don’t get every nuance of what the professor is saying. But the gist is clear enough, and those who want more should study his letter at source or in translation, via the links given above.

Meanwhile, here’s a question of my own. Why, when I do a search on sucharit bhakdi [blank] – where “blank” is a variable successively instantiated by Guardian .. Independent .. Times .. BBC .. Telegraph .. Morning Star – do I get no result? Only when I insert “Mail” do I get a return. And that only because of one man. As with aspects of the Syria narrative, columnist Peter Hitchens is asking pertinent questions no other mainstream media journalist seems prepared to ask. 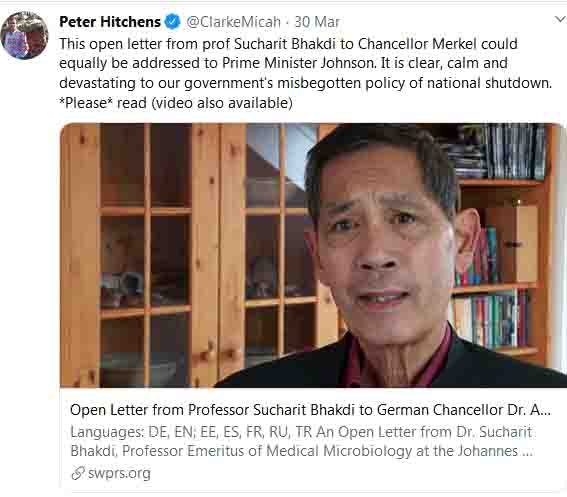 So now I’m asking them. Belatedly, some would say – and that’s an aspect I will go into, but not here. I want to keep this post very simple; confined to those vital questions not being reported, far less addressed, in mainstream and Left media alike.

For the same reason I also won’t be offering any theory – whether based on panic, conspiracy or other impulse – on why we might be stampeding down a blind alley teeming with all manner of dangers. I simply want in this post, and others yet to be written before I even consider any attempt at explanation, to profile expert voices2 currently sidelined despite – I won’t at this stage say because of – asking key questions along the first of two related lines of inquiry:

How solid is the evidence that this virus poses a threat on the scale we’re being told?

What are the costs – in economic, mortality, psychological health and civil liberties terms to name a few of the more obvious – of “the drastic containment measures”, as Professor Bhakdi fairly calls them, we’re being told are a right and necessary response?