Merry Christmas one and all …

… but, well, dash it – bah humbug. There’s a ton of stuff on which I beg to differ with Modern Monetary Theorist Richard Murphy – heading the list being his silence on Britain’s nature as a major imperialism, and MMT’s failure to see money as a master commodity whose value may, like that of all commodities, be skewed by a raft of extrinsic factors but is ultimately tied to the human labour it represents.

But I subscribe to his blog for a number of reasons. These include his being an ace polemicist with a refreshing refusal to suffer fools gladly. (Witness the short shrift he gives strawman or otherwise asinine arguments below his own posts.) And the fact his theoretical premises have seen him make demands no capitalist government can concede, beholden as they all are to a ruling class they pretend does not exist – yet all progressives can support.

(Whether Mr Murphy sees that his demands cannot be conceded, or advances them under the illusion that governments are merely economically illiterate, is neither here nor there.)

Yesterday, Xmas Eve, he posted this on his Tax Research UK blog.

This comes from the government’s analysis of its Brexit deal, leaked this morning to Guido Fawkes (quite deliberately, I am sure): 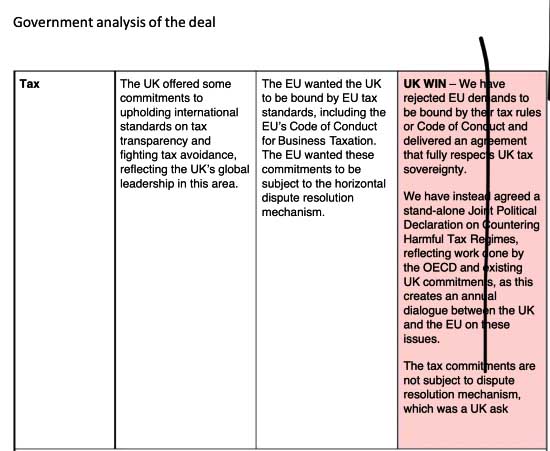 There will be much celebrating in the UK’s tax havens, and in the City of London at this news.

I cannot count the hours I spent helping ensure that the UK’s Crown Dependencies of Jersey, Guernsey and the Isle of Man, in particular, complied with the EU Code of Conduct on Business Taxation between about 2004 and 2010. And I won, to be candid. Their tax laws were radically changed as a result of the campaigns I worked on then. Their planned ways to avoid the obligations of this Code were defeated, in a word.

And now the Code will no longer apply. And so they can reimpose the artificial ring fences that favour non-resident taxpayers and so recreate full tax haven status again.

Will the new deal the UK has proposed be good enough? I very much doubt it.

This is not a Christmas present that I wanted.

Still, let’s not completely ruin a good beat. I considered Bowie and Jagger of course, but in the end no one ever bested Martha and the Vandellas with this one.

2 Replies to “Dancing in the (UK Tax Haven) Streets”