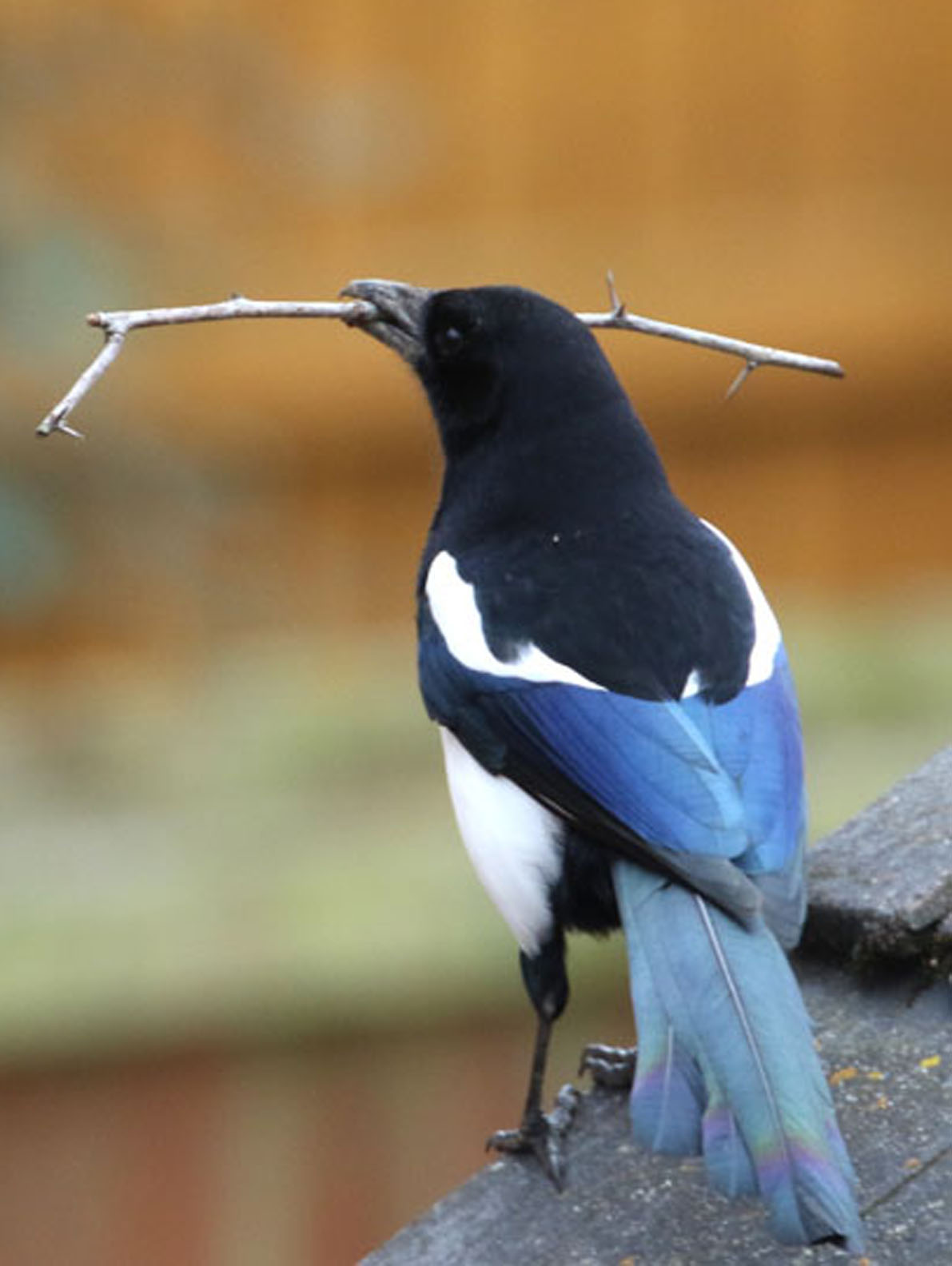 By middle of March a pair of magpies were nest building in a cherry tree at foot of our garden, two metres from a three-storey house whose east facing end wall overlooks the back of ours. That wall shelters the tree from prevailing west winds but blocks out a lot of light, forcing an arboreal scramble to clear the roof.

Allowing a nest higher than your typical cherry would provide. In fact it’s just above the level of two of our west facing upper windows, giving my lens unusually favourable angles of vision. 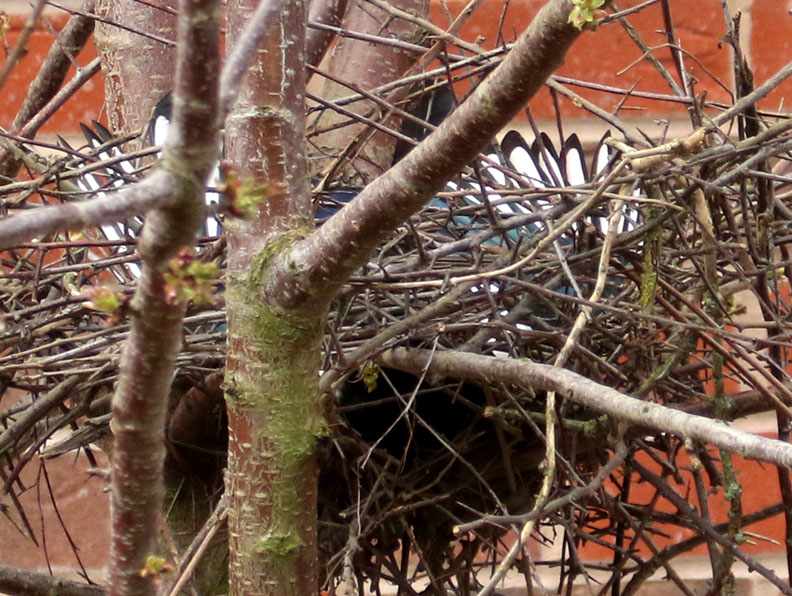 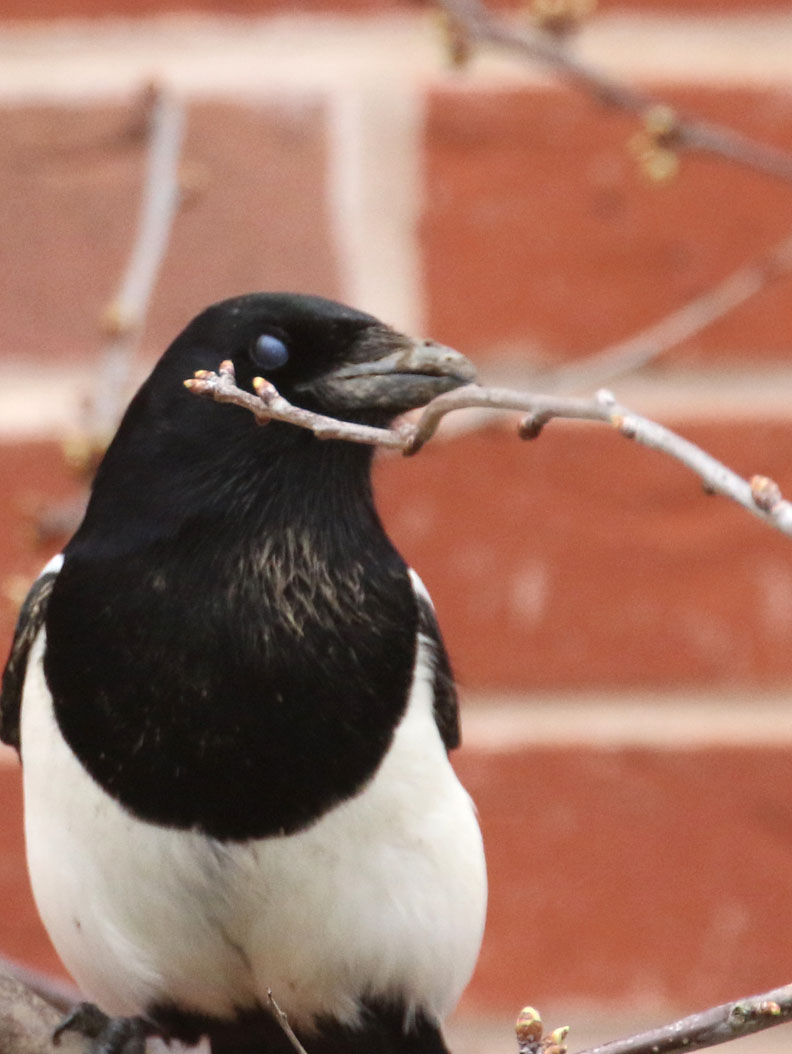 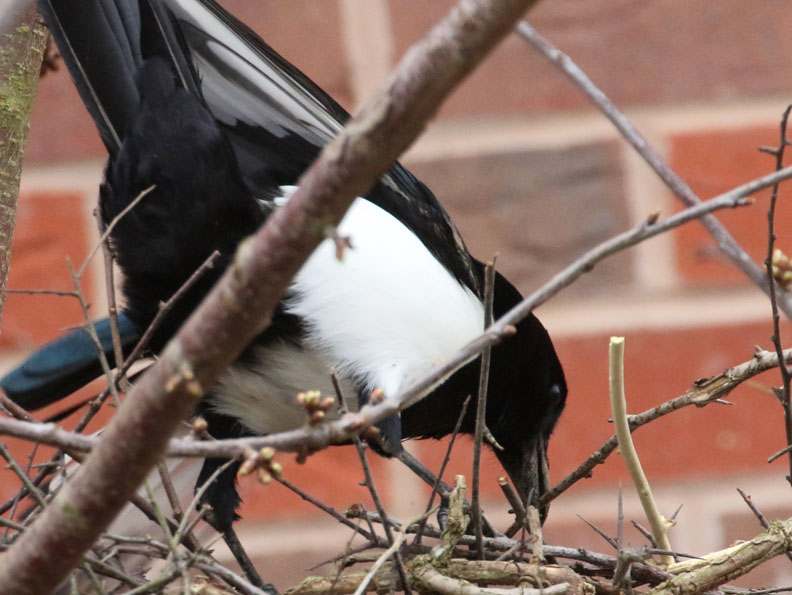 But this year the winds of late March came not from the west but the south, and were violent enough to take out two panels of the east-west fence separating our garden from next door’s to the north. Against these the nest was not only unprotected. The narrow gap between fence at foot of our garden, and that east facing end wall, was now a wind tunnel. On the last Saturday in March the fruits of labour I’d observed and snapped for a fortnight were carried away. 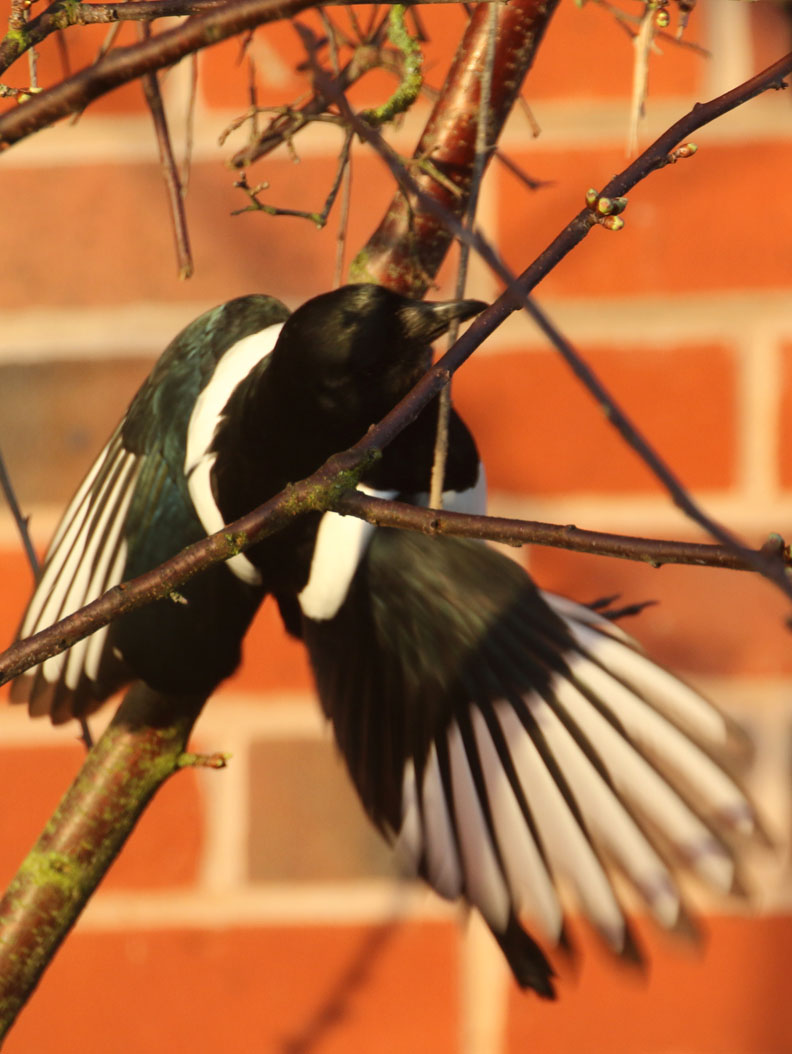 I searched online. What do magpies do when dealt such a blow? I found nothing specific to this species but did discover that, as a rule, birds will rebuild close to the original site. I wondered if I should help them along by collecting twigs and laying them out at foot of our garden.

(After all we were already doing the equivalent of ferrying cups of tea to the workers, who every now and then would take elevenses at a feeding tray below our balcony.)

For two weeks I’d been monitoring their flight path. While one bird (the female?) did most of the construction work, the other would fly down from the right hand side of the nest, often to perch for a few seconds on the slates of an outhouse in that northern neighbour’s garden. From there it would swing west, past the northern side of the row of houses whose end wall faces ours, and over the tree lined recreation ground two hundred metres distant. This borders on allotments further west, with a small pond and railway track to the south. From this amply provident terrain it would collect a twig, leaves or clutch of grass then return on a trajectory south of the row of houses to bring it back to the nest from the left. 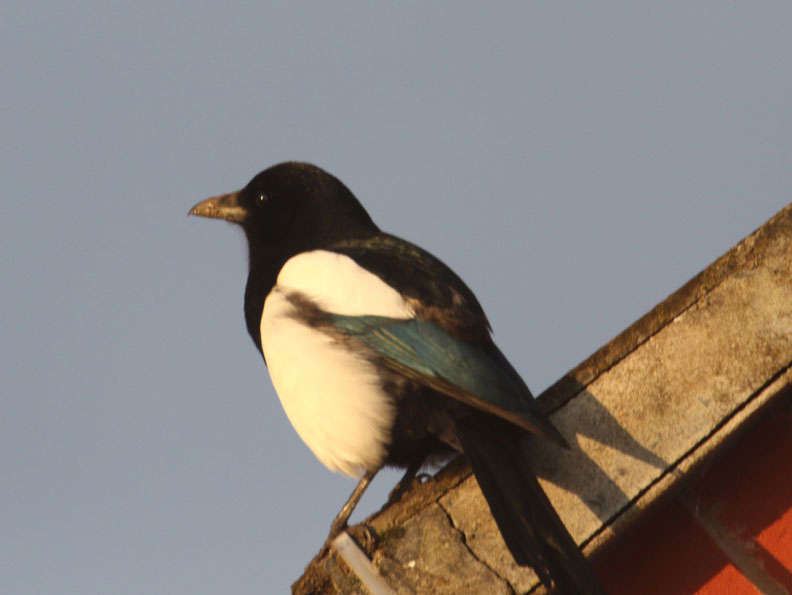 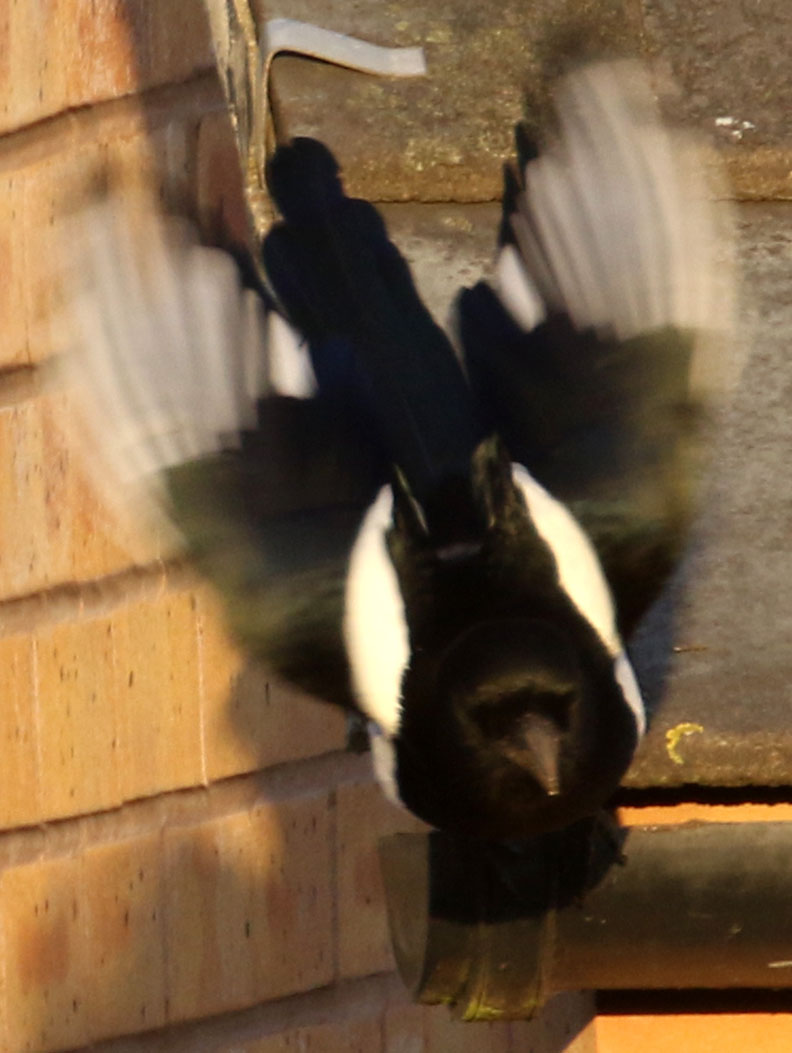 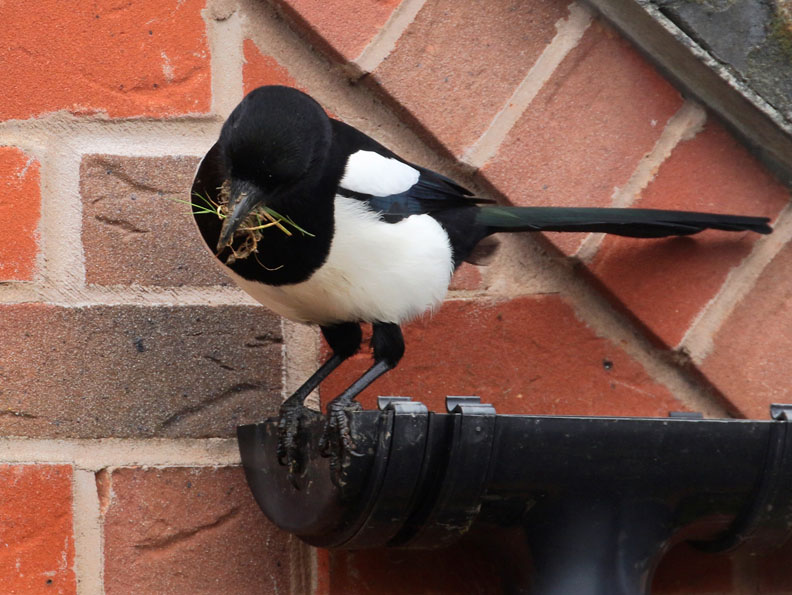 This was a common routine, though there were many departures, and not just to route taken. At times both magpies went out for materials. My dilemma was this. While my intervention might shorten those gathering trips in what must now be a race against time, was it best to let nature take its course? (Albeit inconsistently, given that feeding tray.) The latter won out.

No great harm seems to have been done. After the first nest was carried off, the birds spent two or three days visiting the site. I assumed their internal states to be sad and perplexed, possibly peppered with panic as the hormonal clock ticked frantically. Then they kicked into action, and for the past few days have been hard at it: using not only the same materials and methods but in the very same spot, high up the lanky cherry tree, above the upper frame of that end window facing steel city house.

From here on in it’s just pictures. The snowy blossom of Housman fame is already appearing, to obscure my line of sight and fox auto-focus. I hope to have illustrated chick-lit in due course, but can’t guarantee this. 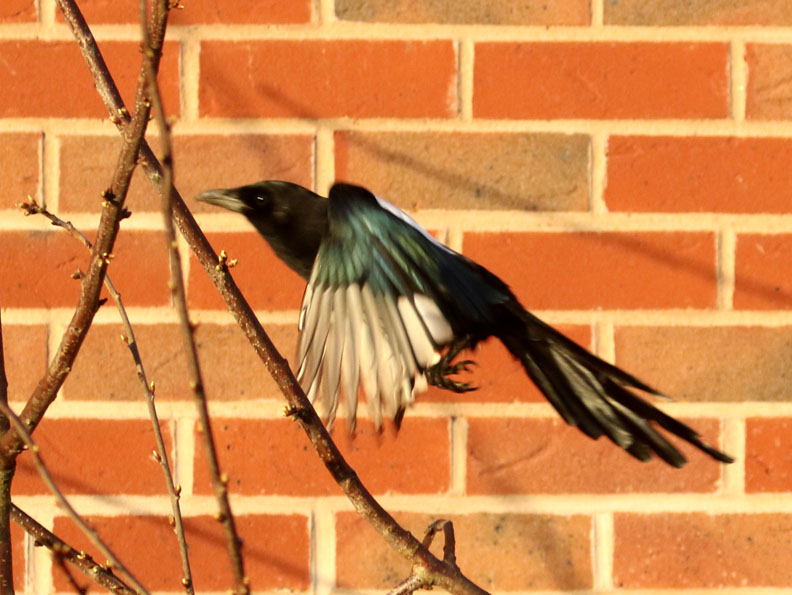 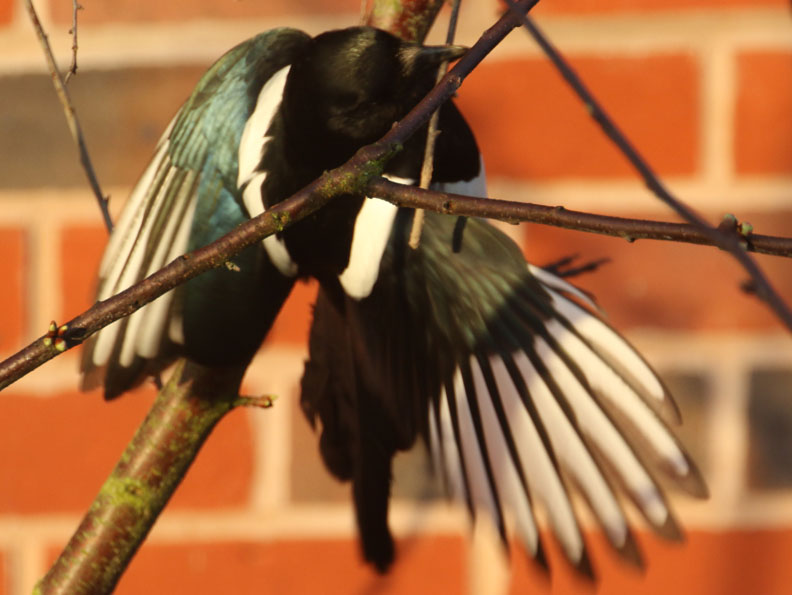 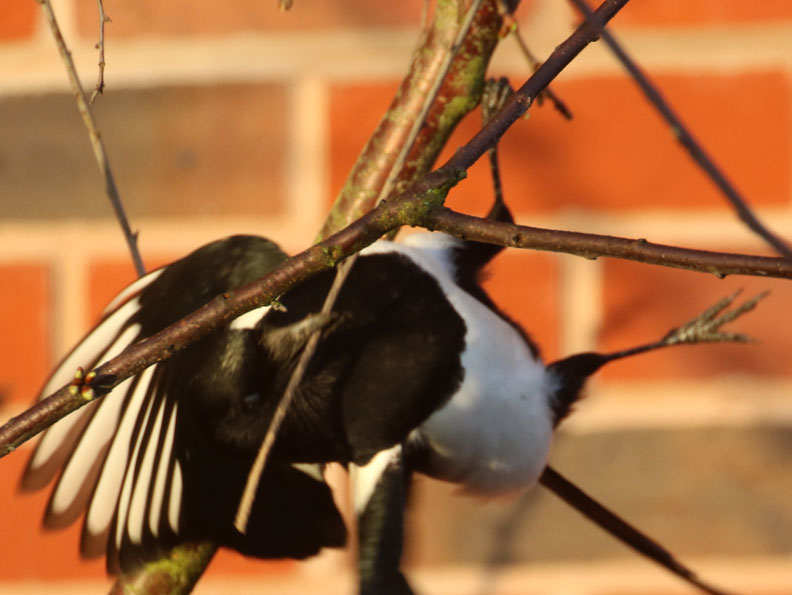 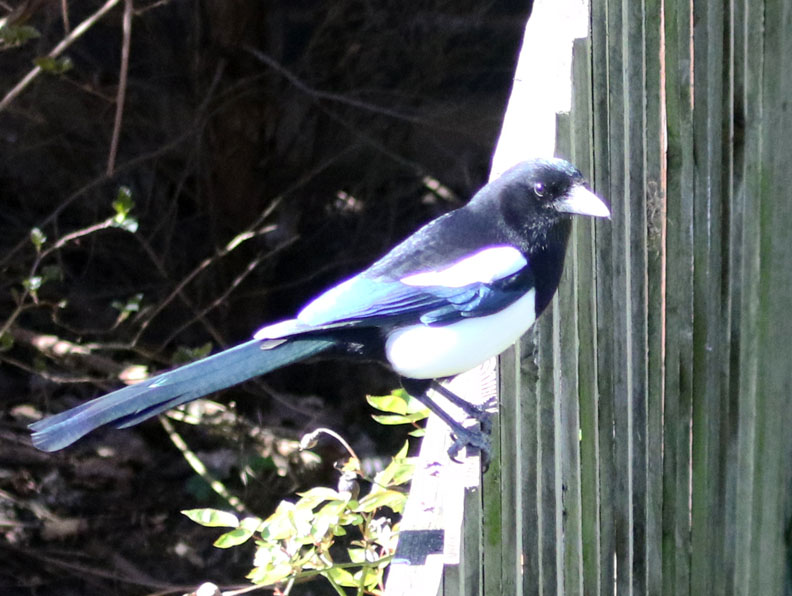 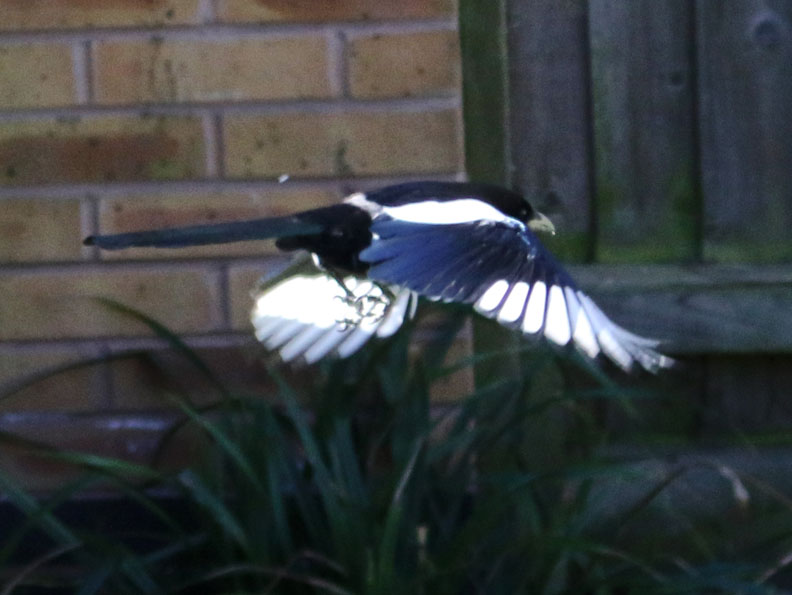 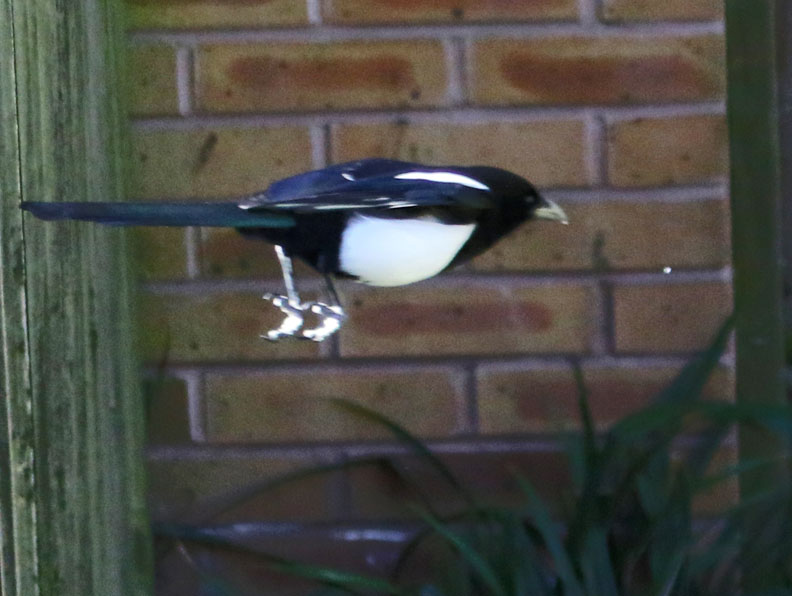 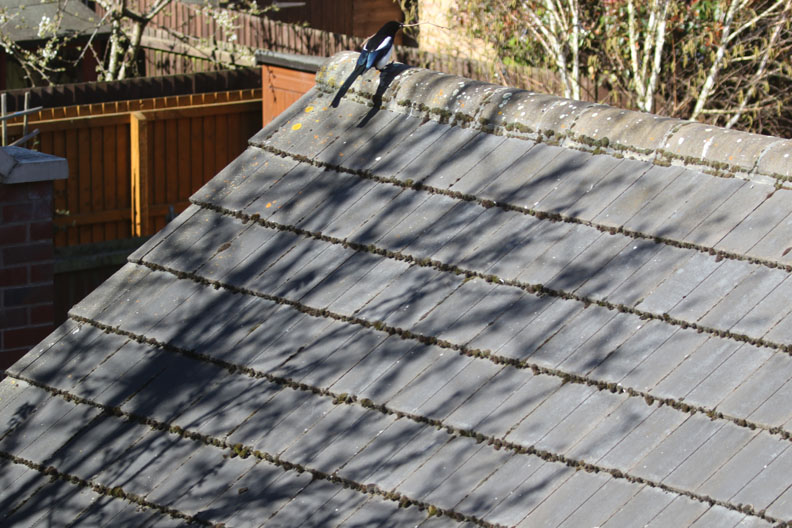 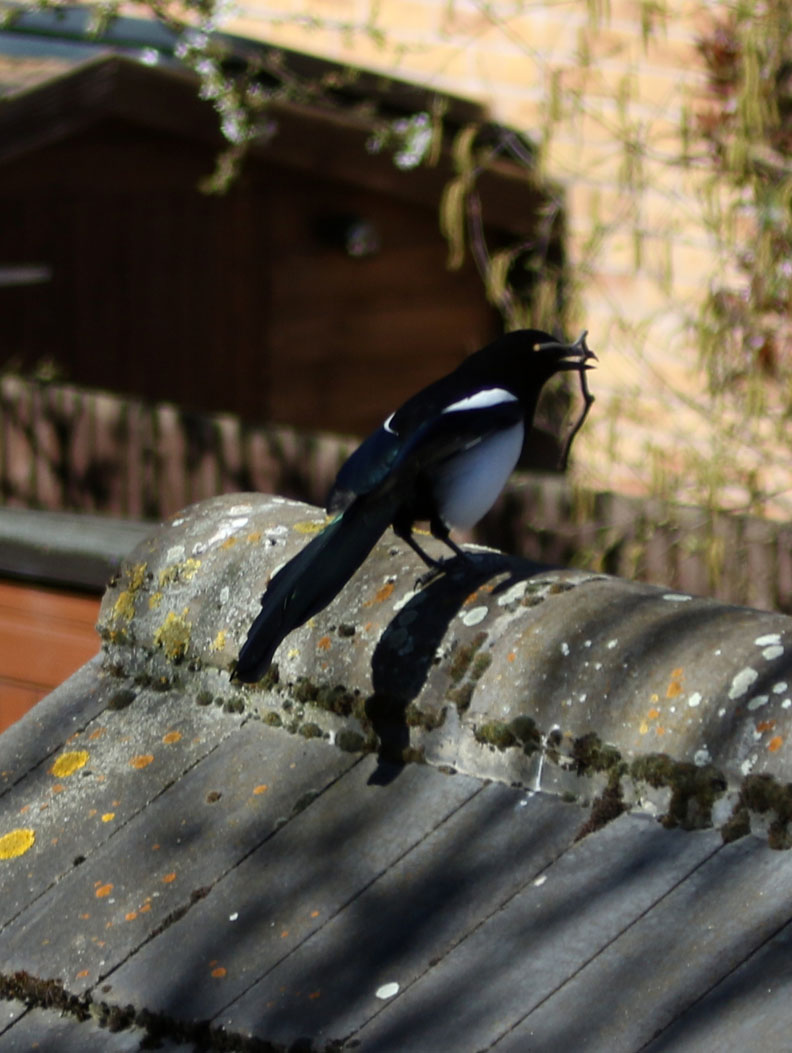 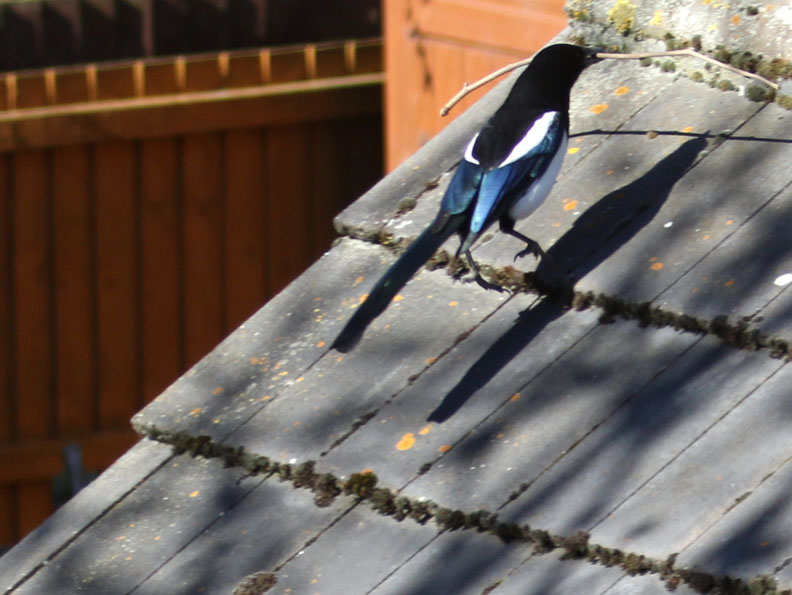 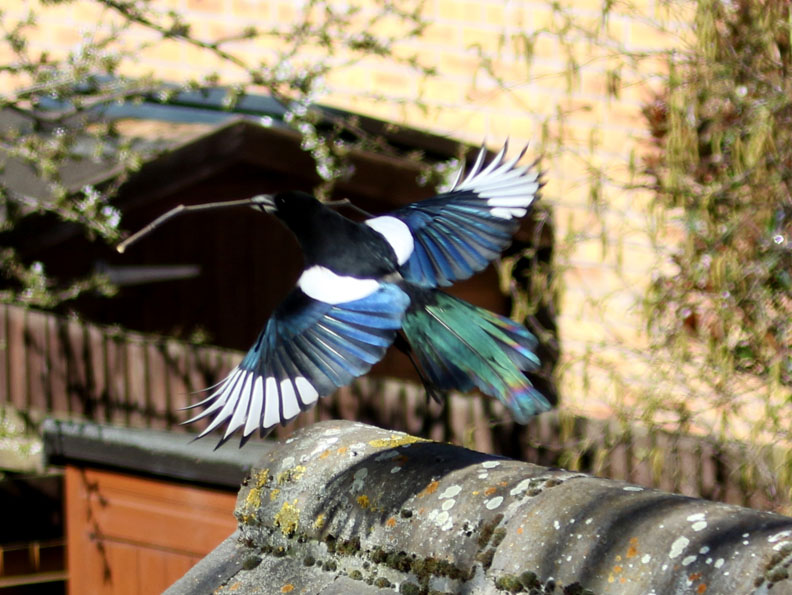 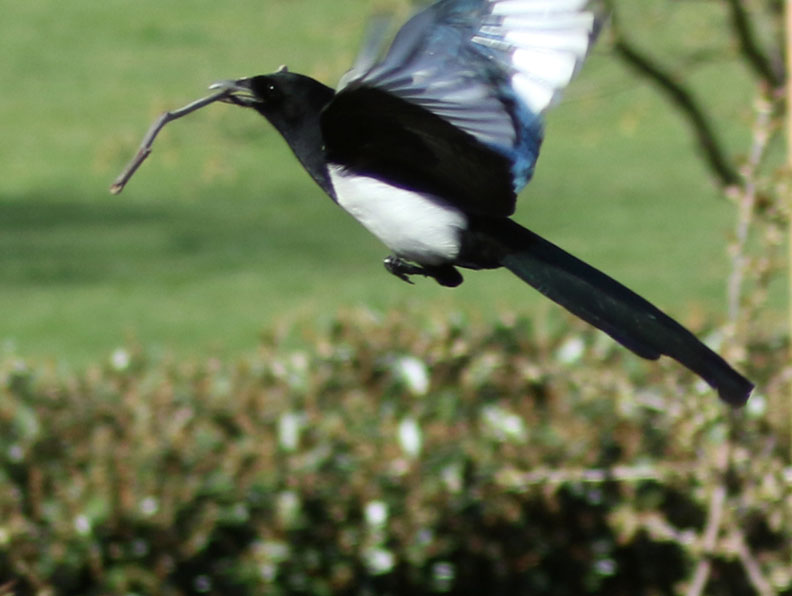 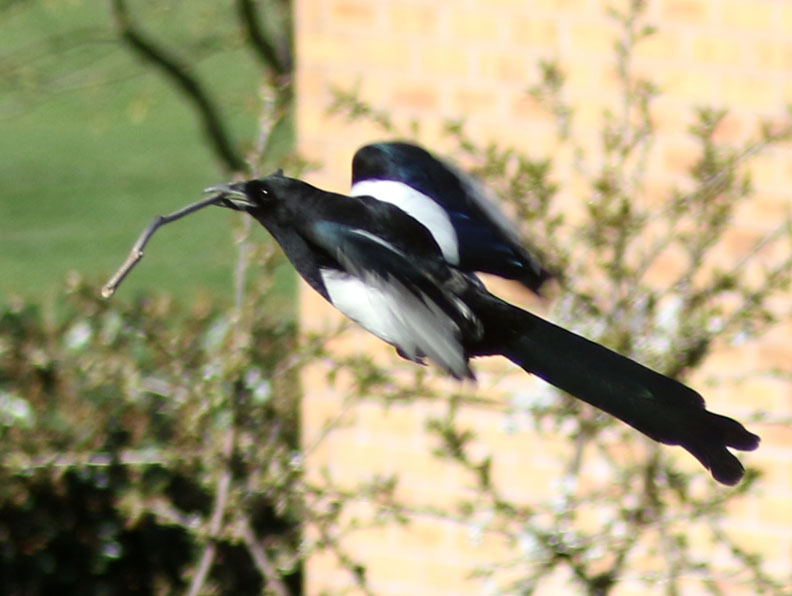 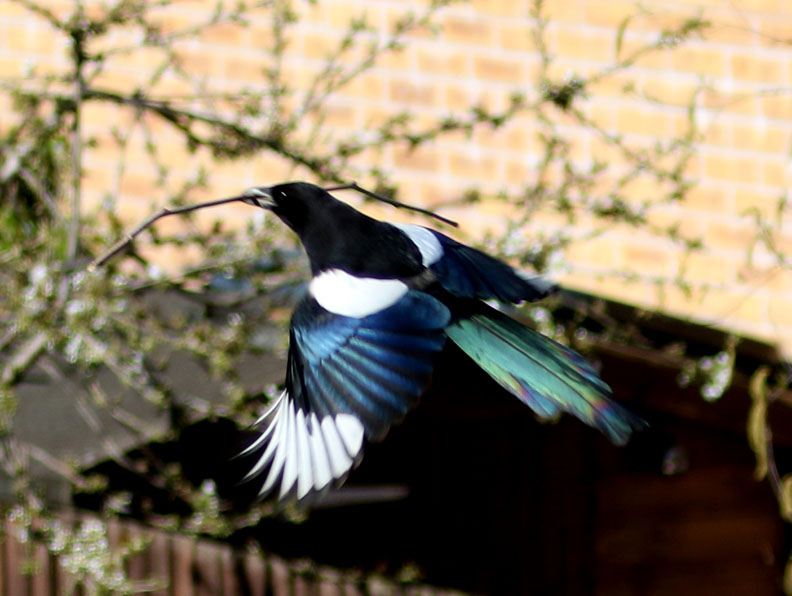 One Reply to “Magpies nesting”