Just another tale from the archives of US democracy in action. Craig Brittain, who last year ran for Arizona Senator as a Republican, was former owner of a website – IsAnyoneDown dot com – which posted nude pictures of women without their consent, then charged them hundreds of dollars to have them taken down. He has form on racism and misogyny.

The BBC isn’t running for Senate, does have a reputation to uphold, and yesterday ran a piece on why African states (beneficiaries of Belt & Road and an Asian Infrastructure Investment Bank which, unlike the IMF, loans billions to the global south without making them conditional on key sectors being privatised for Wall Street gain) aren’t buying the West’s relentless campaign on ‘Uighur genocide’.

Those who truly get how corporate media serve power, even while putting up a show of feisty opposition,1 will be unsurprised by the Beeb’s muted concession that the global south has seen only too well how the lofty banner of ‘human rights’ aids empire aggression. Unsurprised too to read that less pliant African states are as one with Beijing on the principle of non interference – and just waiting for the Beeb to get us back on message with a reassurance that:

Younger Africans may not be so impressed [with China] – they have an overwhelmingly positive view of the US and its development model.

the older generation and government leaders feel differently – and their decision to turn to China for infrastructure funding … has transformed the continent’s landscape with expansive roads, bridges, railways, ports and an internet infrastructure that has ensured the continent is not a pariah in the digital economy.

The wall-to-wall demonising of China by Western politicians and corporate media, though of a piece with decades of brazen hypocrisy on human rights, is now at levels which make it the gravest and most pressing threat confronting humanity. I recently posted three ‘China reads’, with introductions on why they matter. You could say I’ve gotten mighty interested in all things China. Only yesterday, in a reply to a reader, I followed my reasons (practical not ethical) for opposing violent opposition to state power, and my having no faith in either a parliamentary or revolutionary road out of barbarity, with this:

This won’t be popular with many – of right, left or liberal stripe – but my greatest hope now lies with the rise of China, with the Asian Infrastructure Investment Bank challenge to the IMF and petrodollar hegemony, and with One Belt One Road’s to the willingness of five successive Washington administrations to bomb and/or impose lethal sanctions on any state looking to break free of the US orbit.

And as one interested in language and reason, frequently misused put-downs on social media get my attention. Conspiracy theory, fake news and – as a stock response by useful idiots to those who point out ‘our’ double standards – whataboutery are all cases in point. As is that equally misused latinate, ad hominem.

And as it happens, these two interests (though in the case of China that’s too small a word) joined up with the lesser theme of the delightful Craig Brittain in an FB exchange initiated by that BBC article. 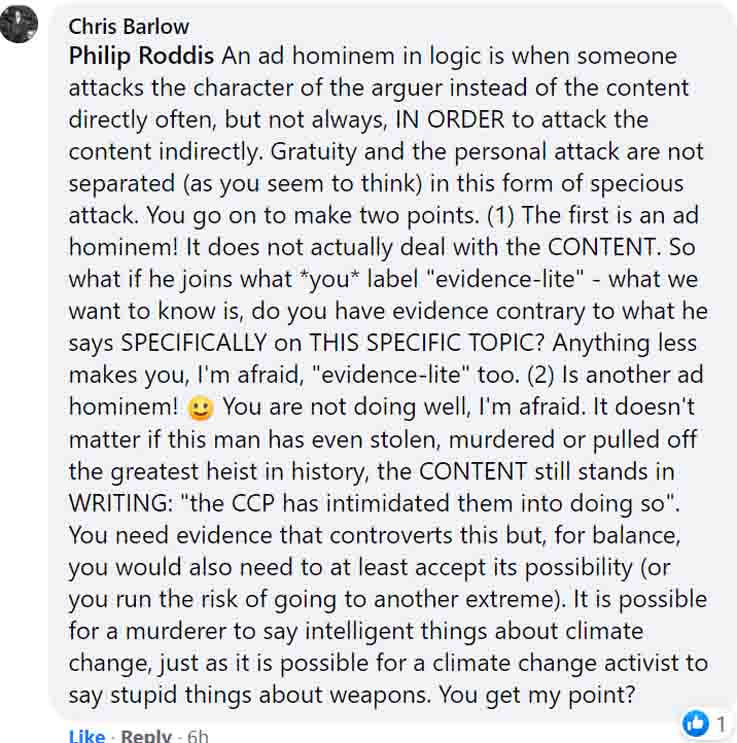 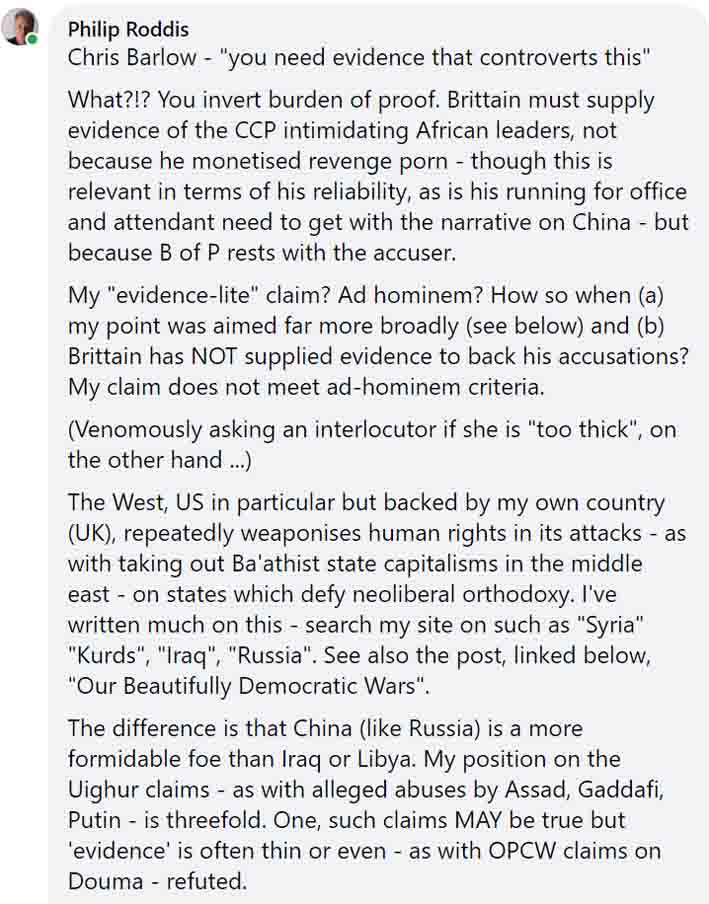 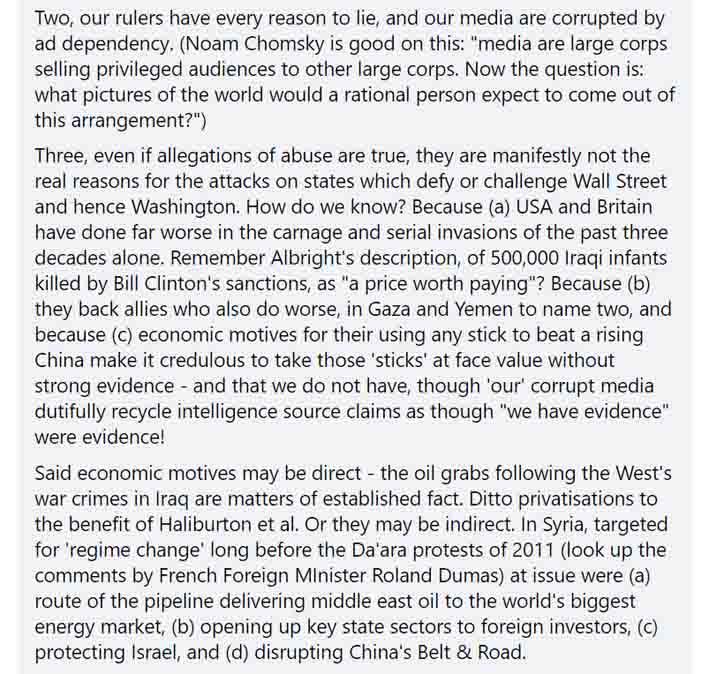 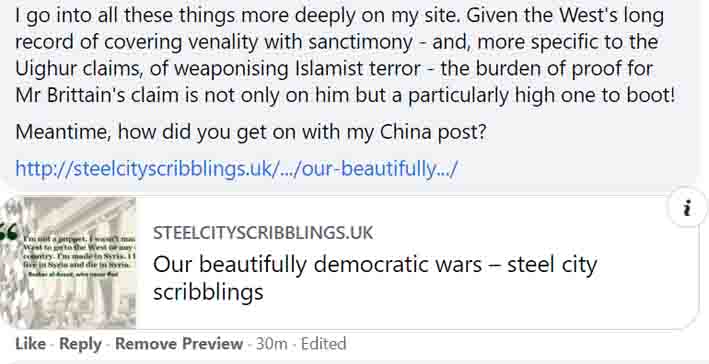 Update, May 10. Six days on, Craig Barlow, if that is his name, has not answered my question or made any further comment. Others on this thread, for brevity’s sake not reproduced here, have hinted that the shared initials may be telling. When I went to his page, as on occasion I do to check where an interlocutor is coming from, I find no posts. Is his a zombie profile? Could ‘Chris Barlow’ and Craig Brittain be one and the same man?

Other clues are a supercilious tone – “yawn” … “too thick” … “you are not doing well I’m afraid” – forensic linguists might find similar to the style of a man who, as the second source  linked from my opening paragraph says: