To keep focus on the double standards in play, I may well have conceded too much ground in yesterday’s post on the Belarus incident. Here’s how I opened:

So “international opinion” castigates Belarus after this Sunday’s forced landing – without doubt a despicable and alarming act 1 – of a plane carrying a wanted man, who was then arrested.

That footnote 1 marker, between ‘act’ and dash, refers to this:

To keep this post short I don’t go into the character of the man snatched. That he was snatched at all is indeed “despicable and alarming” though the point here is that the precedent for such piracy was not set by Belarus. But even as Roman Protasevitch is being lionised, pre-emptive dismissal by corporate media of “propaganda” efforts – we don’t do propaganda in the West of course – by Putinbots and Lukashenka lovers to paint the man as a neo-nazi inadvertently flags up, for any adults straying into the room, a more complex realpolitik in a part of the world where far right resurgence, aided by US backed ‘colour revolutions’, is a very real threat.

Since then, with my task of highlighting hypocrisy completed, I did a little research on both the incident and the man at its epicentre. For reasons given many times on my site, most recently here, I see it as credulity incarnate to rely solely on corporate media for information about anything beyond the weather, football and what’s on telly tonight. I get my pictures of the world by triangulating sources that include said corporate media – the more upmarket instantiations obliged to concede some truths, even on important though seldom on crucial matters, if only to maintain brand credibility – but which go far beyond.

Where ‘far beyond’ includes:

By such triangulation – factoring in known biases, weaknesses and limits to journalist access3 – I don’t say we always get at  the truth. Simply that we can get a lot closer to it than reliance on Graun and Beeb could possibly take us.

With this in mind, here’s Ben Norton yesterday (May 26) in the GrayZone. Both are sources I’ve come to trust, but that’s not the issue. They do not ask us to trust them; rather, they offer reason backed by evidence:

A high-profile Belarusian regime-change activist whose detention on a forcibly grounded airplane caused an international scandal has extensive links to neo-fascist groups, which his political sponsors in Western capitals have conveniently overlooked.

Right-wing activist Roman Protasevich was traveling on the Irish airliner Ryanair on May 23 when the plane crossed into Belarusian airspace and was ordered to land by state authorities. Protasevich was subsequently taken off the aircraft and arrested.

The incident triggered a wave of denunciations by Western governments, and a new round of aggressive sanctions on Belarus. Many anti-interventionist critics pointed out the hypocrisy of the US government’s condemnations, recalling how, in 2013, it forcibly grounded the plane of Bolivian President Evo Morales in an egregious violation of international law because it wrongly suspected he was harboring NSA whistleblower Edward Snowden.

What they refused to acknowledge is Protasevich’s recent history serving with a neo-Nazi militia in Ukraine, and his extensive ties to other far-right extremist organizations.

Protasevich personally admitted in an interview to traveling to Ukraine and spending a year battling pro-Russian forces in the eastern war zone of Donbas. He is even suspected of possibly posing with an assault rifle and a military uniform on the front of Azov’s propaganda magazine, which is emblazoned with a large neo-Nazi symbol.

The influence of Azov and similar ultra-nationalist groups in Ukraine has extended well outside of its borders, spilling over into neighboring countries in Eastern Europe, while also influencing politics in Canada and even Hong Kong, where Azov extremists joined a Western-backed “color revolution” operation targeting China.

And what of the incident itself? I know nothing of French journalist Christelle Néant. A quick check led me to Ukraine outlets damning her as a Putinbot and not a ‘real’ journalist. (Echoes here of Julian Assange’s depiction – dropped reluctantly by Obama, picked up again by Trump and continued by Biden – as fair game on the ground he too was not a ‘real’ journalist.) All that tells me is what I already knew: as the stakes rise, truth becomes increasingly hard to get at.

I therefore offer this piece with a health warning. I do not dismiss Ms Néant’s tentatively offered theory – absence of evidence is not evidence of absence – but to my mind it contains glaring weaknesses:

Nevertheless – since I have learned these past few years to dismiss such ideas only where they defy known facts, are logically incoherent or fail basic cui bono tests – here’s Christelle Néant, also writing yesterday (May 26) on why Ukraine may have kick-started the whole affair:

DIVERSION OF A RYANAIR FLIGHT AND ARREST OF PROTASEVICH – WHAT IF BELARUS HAD FALLEN INTO A TRAP SET BY UKRAINE?

In the early afternoon of 23 May 2021, a Ryanair plane flying from Athens to Vilnius made an emergency landing in Minsk after several airports in Belarus received an email stating that a bomb was on board and that it would explode once the plane was over the Lithuanian capital. Among the passengers was Roman Protasevich, who worked for the Nexta Telegram channel, which was actively involved in organising the anti-Lukashenko protests last year. The Belarusian authorities then arrested Protasevich, triggering literally hysterical reactions from the West, which accused Minsk of having diverted the plane on purpose to arrest the opponent, and threatened Belarus with retaliatory measures whose consequences on the Belarusian economy would not be negligible. What if the diversion of the Ryanair flight carrying Protasevich was a trap set by Ukraine into which Belarus fell with both feet?

This theory may seem rather crazy, but several elements suggest that it is not so insane.

First of all, it should be remembered that contrary to what some Western officials or journalists are shouting, what happened on 23 May has not one but several precedents, including one that took place in Ukraine!

On 21 October 2016, a plane belonging to Belavia (a Belarusian company) was forcibly returned to Kiev’s Zhuliany airport from which it had departed, without any clear explanation or reason. Kiev even threatened to send in fighter jets if the crew did not comply! Once the plane has landed, the Ukrainian authorities arrest one of the passengers, an Armenian citizen named Armen Matirosyan, who is an opponent of the Maidan. At the time, no one in the West cried out that Ukraine had committed a terrorist act (double standards) for this hijacking of a Belarusian plane. Belarus itself did not react hysterically to the incident, nor did it threaten to cut off air links with Ukraine, as the latter has just done after the Ryanair flight incident.

Another fact to remember is that Ukraine was ready to do it again last year! Remember, at the end of July 2020, the Belarusian KGB arrested 33 Russian mercenaries whom Ukraine initially intended to catch when their flight passed over Ukrainian airspace. This time the idea was to get SBU [Ukraine special forces] agents on board to play a sick man and a medical staff member respectively, and simulate a serious health problem to force the plane to land in Ukraine, disembark and arrest the 33 Russians. But the operation did not go according to plan, and Belarus rejected Ukraine’s request to extradite the Russian mercenaries, who returned home.

This monumental failure of the Ukrainian secret services has left its mark in Ukraine. Several political figures accused people close to Zelensky of being responsible for the leak of information that led to the failure of the operation, and asked to question everyone, including the President! In other words, some people in Kiev must have had a hard time digesting this affair and held a grudge against Minsk for this mess. What if Ukraine had decided to take revenge on Belarus by provoking a huge scandal that would have disastrous political, economic and media consequences for Minsk?

Because the idea that Lukashenko would have decided on a whim to divert the Ryanair plane just to arrest Protasevich – knowing that this would trigger an international scandal and potentially disastrous retaliatory measures for Belarus economically – doesn’t add up. Something’s not right.

Indeed it isn’t. Given a waning Western Empire – a homicidal US ruling class at its helm – bent on stopping the unstoppable, i.e. the rise of Eurasia, very little is ever right. Least of all in this neck of the woods. Excuse me while I get my favourite map out for the umpteenth time …

… and here’s where Belarus fits in. 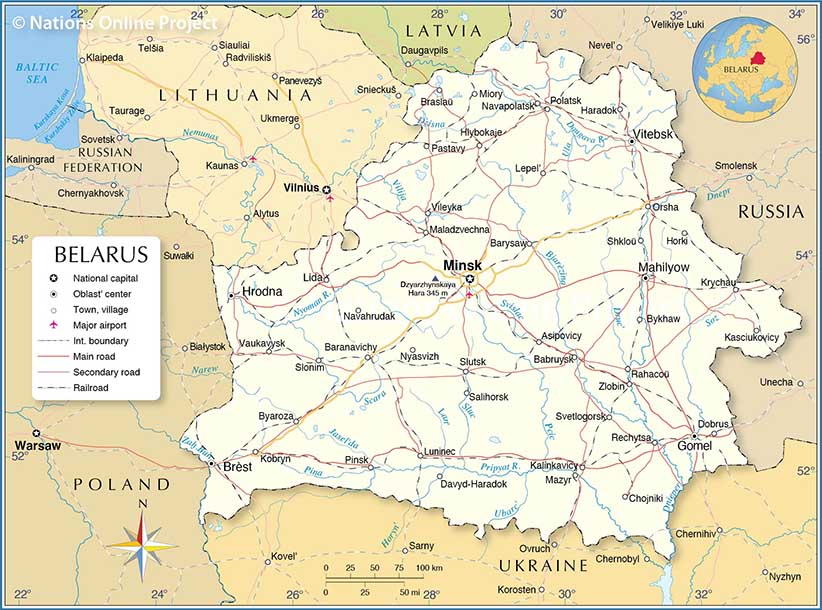 While it is unwise, though depressingly popular in some circles, to rely solely on the cui bono question to establish guilt, in these matters it can certainly aid the elimination of suspects from our enquiries. In that final paragraph of the above extract, Ms Néant does right to raise it. Why would a man of Alexander Lukashenka’s experience risk so much, for so small a pawn?

13 Replies to “Belarus: the plot thickens”