Long Close Farm, looking southeast from the Powterhow Wood shore, across Redness Point on the southern end of Bassenthwaite. Shot from several hundred yards away, on a long telephoto lens, in the soft light of early morning. 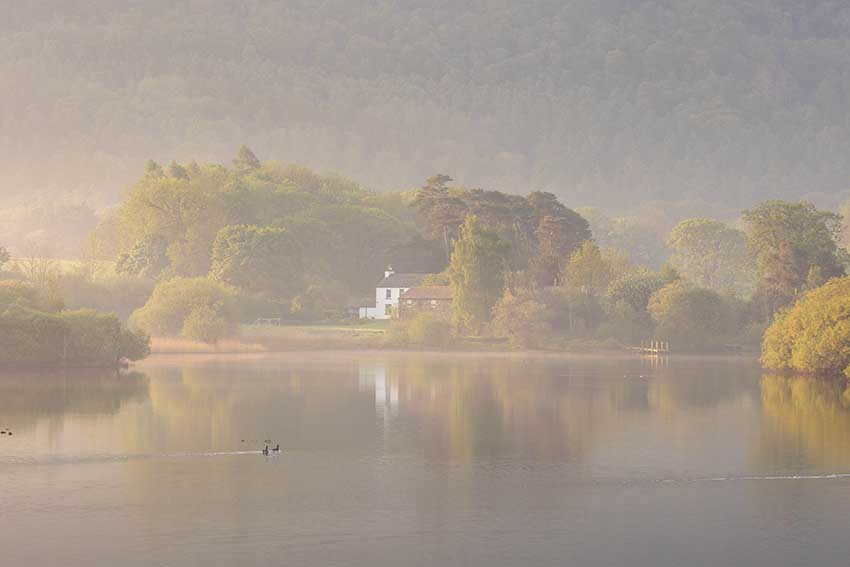 Derwentwater from Crow Park, Keswick. It’s not yet 06:30. 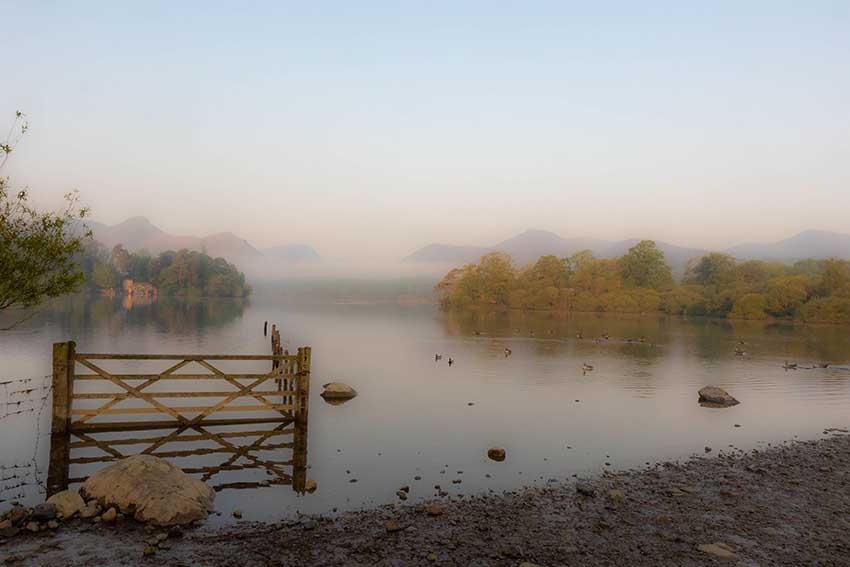 From the landing stage at Keswick. Filming “William and Dorothy”, director Ken Russell bought the island and house. In the late ’70s I not only walked to it, but saw a car drive across. Keswick Council used to test drill and, once the ice was ten inches thick, declare it safe to do so. 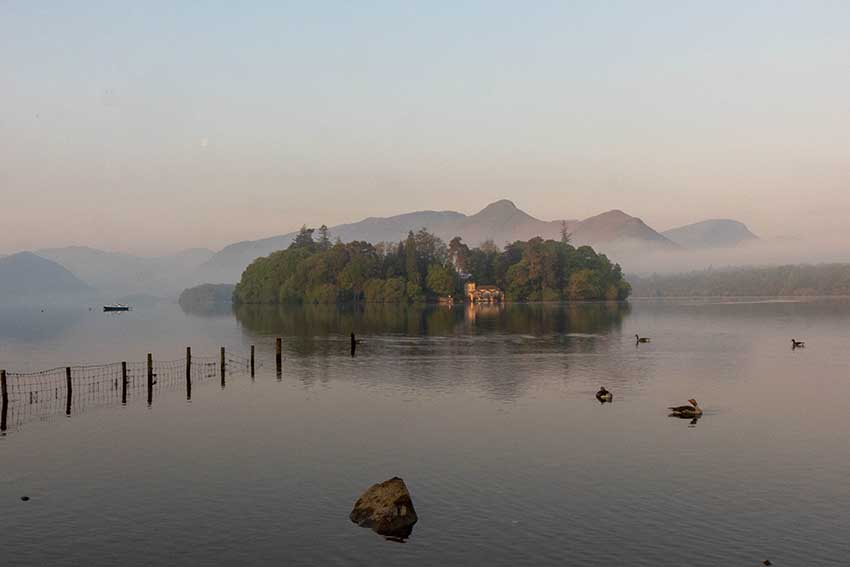 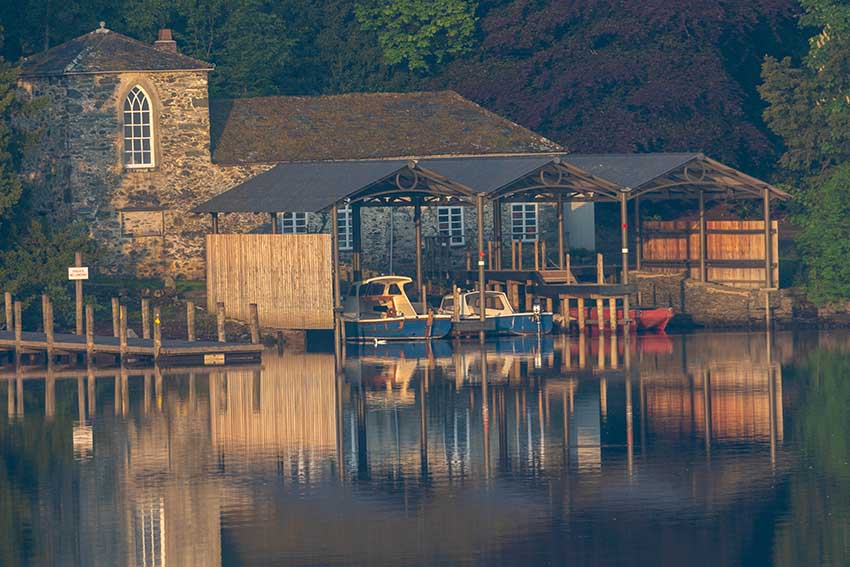 Looking (below) across Derwentwater at Cat Bells, one of my father’s most cherished walks.

On a summer’s evening in 1963 I saw this lake for the first time. I’ve made scores of visits since, brought my sweethearts, bivvied on its banks, played togger on its frozen surface and rowed a ‘borrowed’ boat across it at midnight, but it never loses its charm. 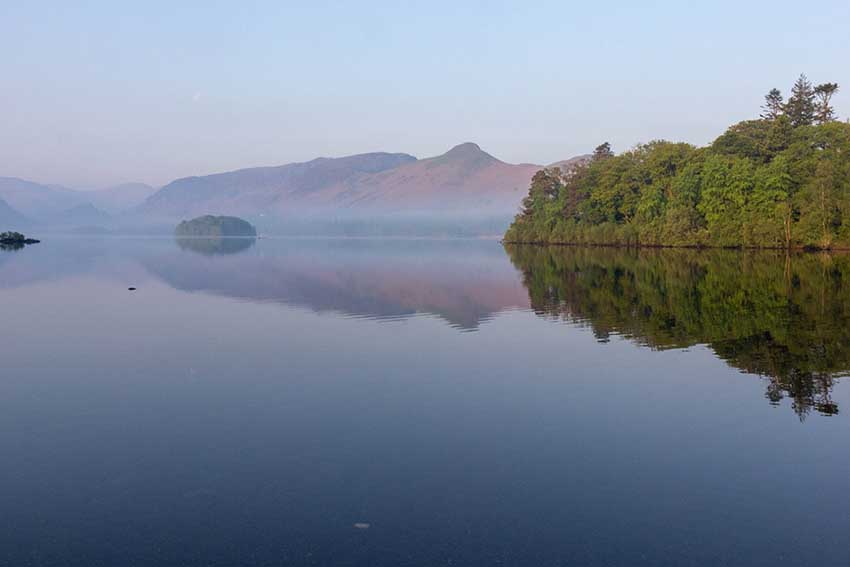 Looking down Derwentwater to the Scafell range. 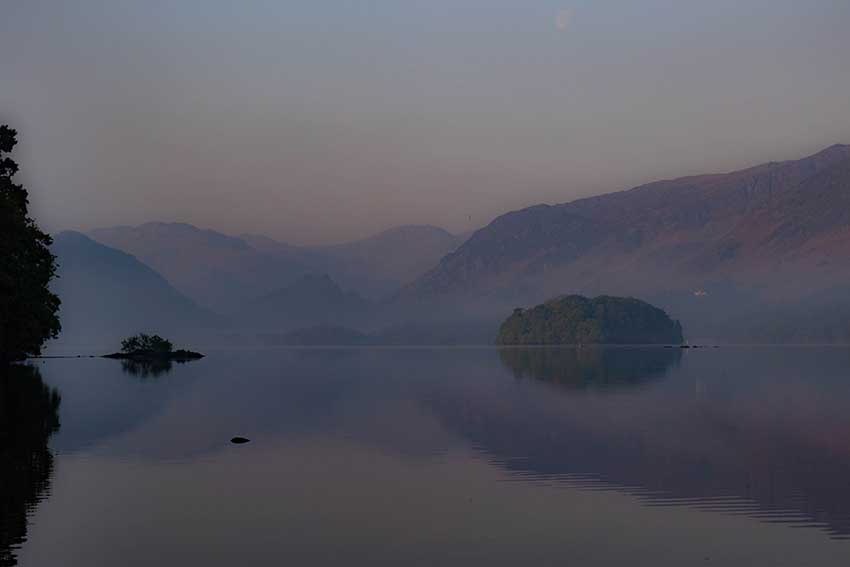 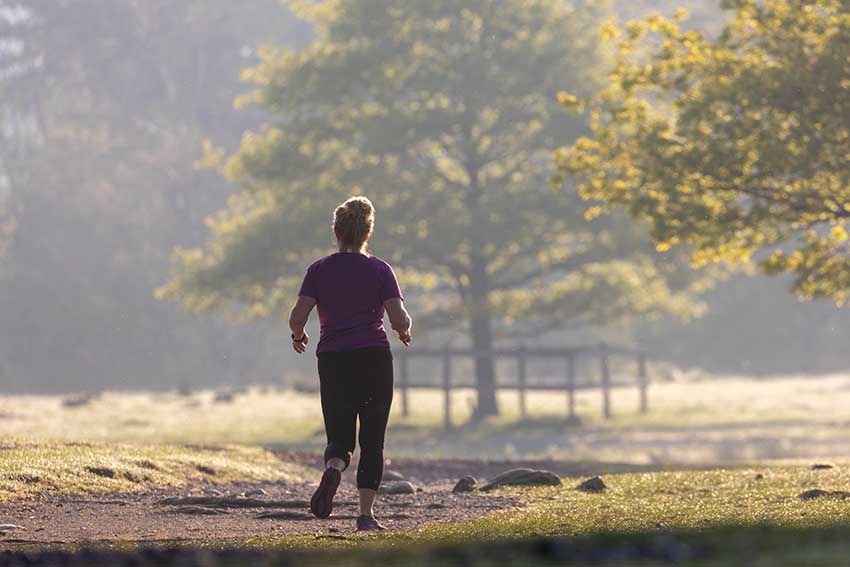 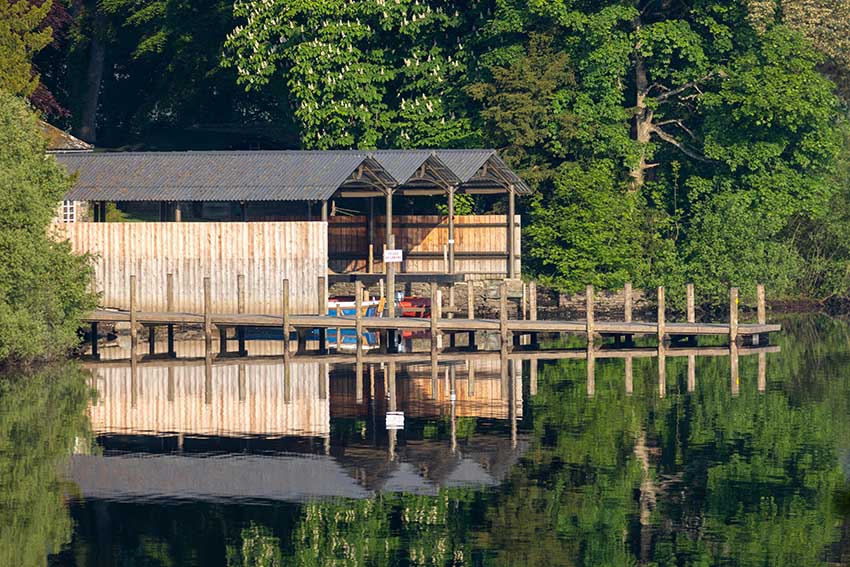 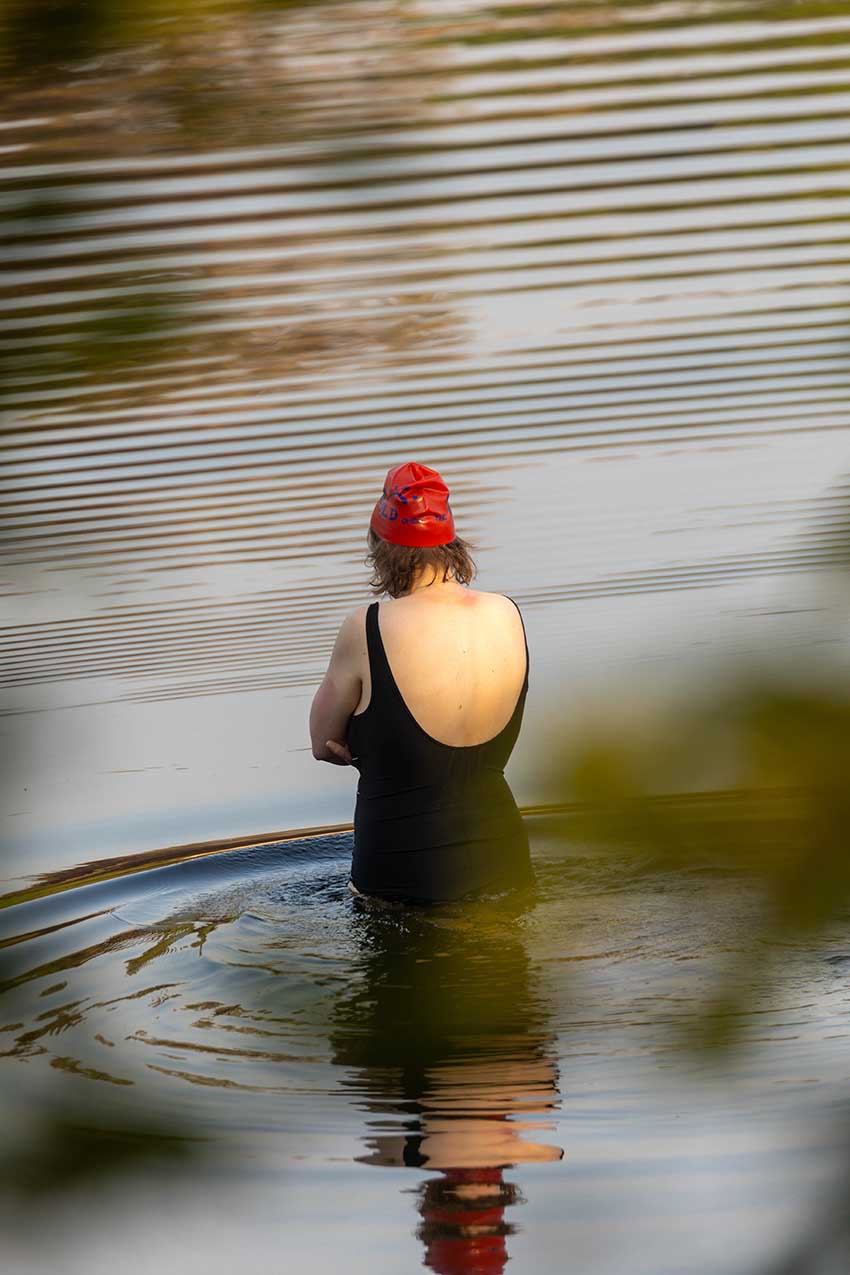 A south flowing Glenderaterra Beck tops up the Greta two miles upstream of Keswick. In the distance the ground reaches upwards and eastwards, behind the trees, to Blencathra. 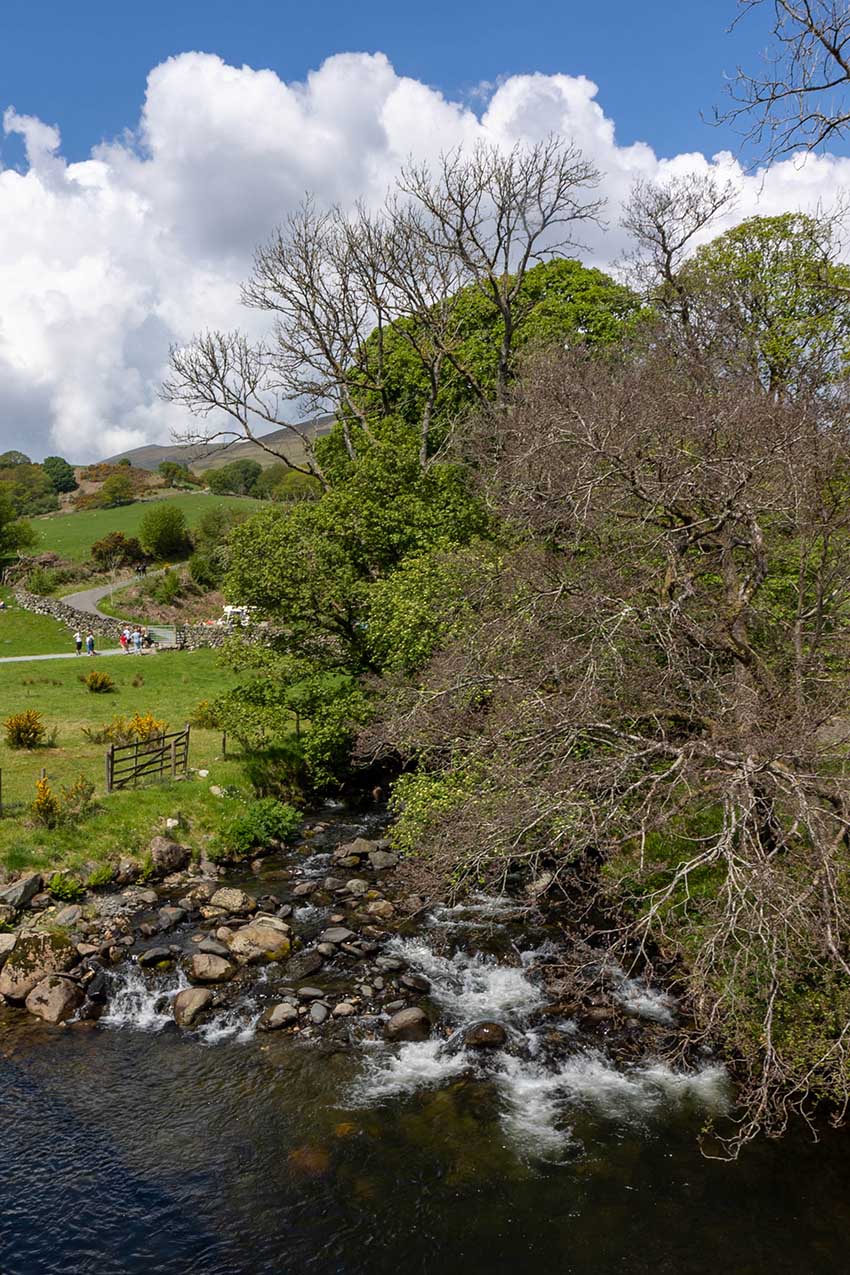 A trick of the telephoto. At a focal length of 560mm, not only are absolute distances reduced. So are relative distances, causing a foreshortening of this Heaton-Cooperesque view … 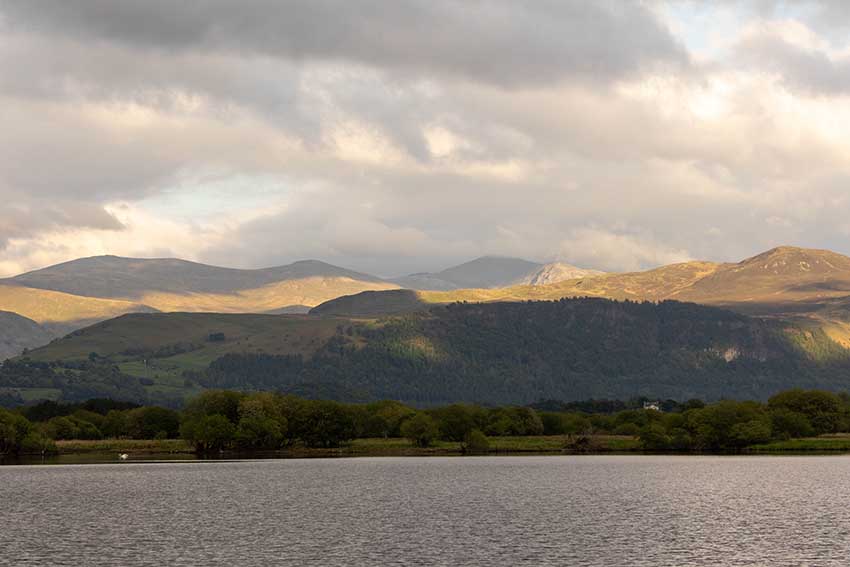 … I’m a few hundred yards up the west bank from the southern end of Bassenthwaite – south east of Woodend, east of the A66 as marked below. On an eastward bulge of shoreline, I’m looking down the lake. Had I been facing southwest or south my line of sight would not have taken in any of the lake. Had I been looking southeast it would have crossed Keswick. Ergo I was looking south-southeast. The hills overlook Borrowdale Valley, several miles distant. I’m thinking Castlerigg Fell (well to the south of Castlerigg) and Bleaberry Fell. 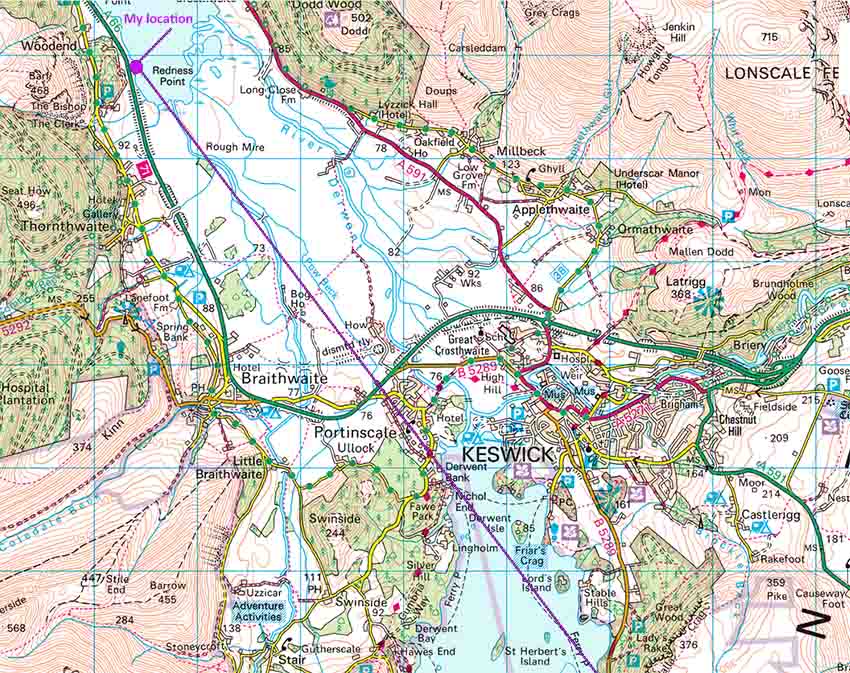 The first rays of sun light up the lower slopes of Lord’s Seat, west of Bassenthwaite and north-west of Thornthwaite village. 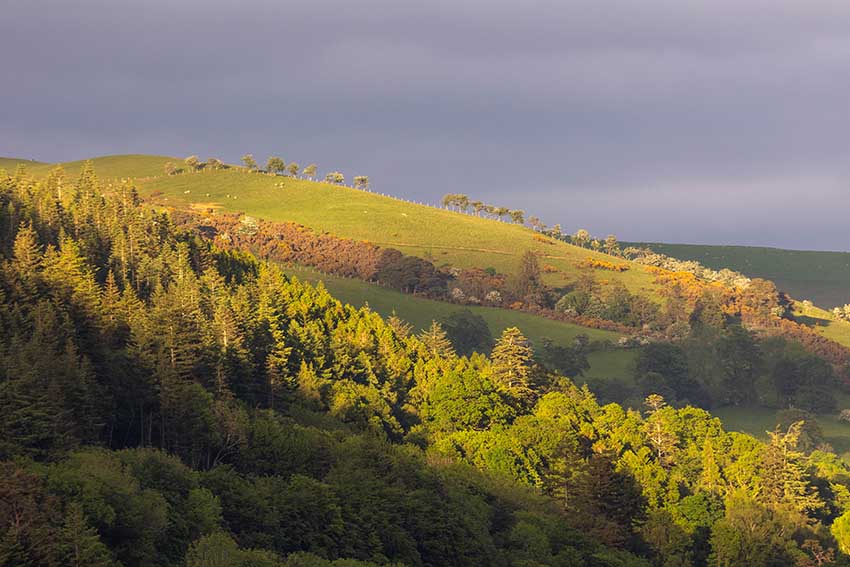 The road to Grisedale Pike is lit by an evening sun about to sink behind Hopegill Head. 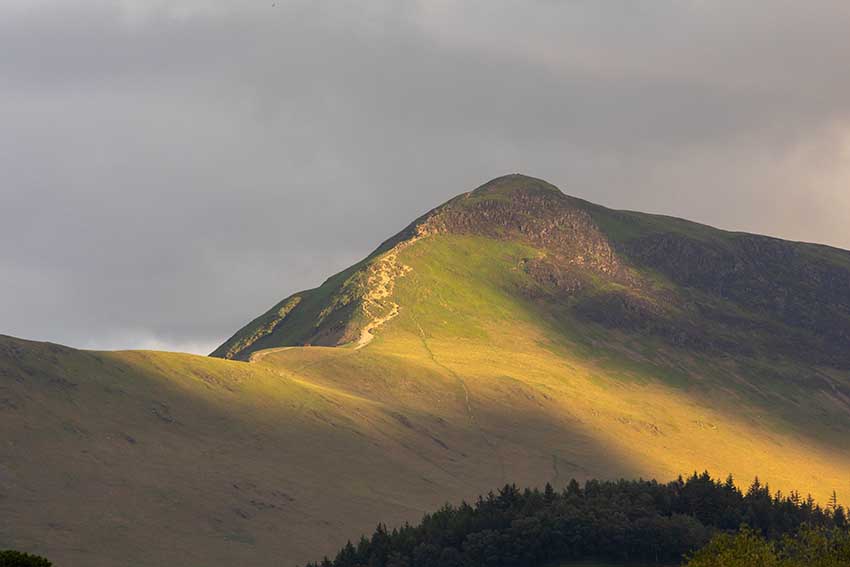 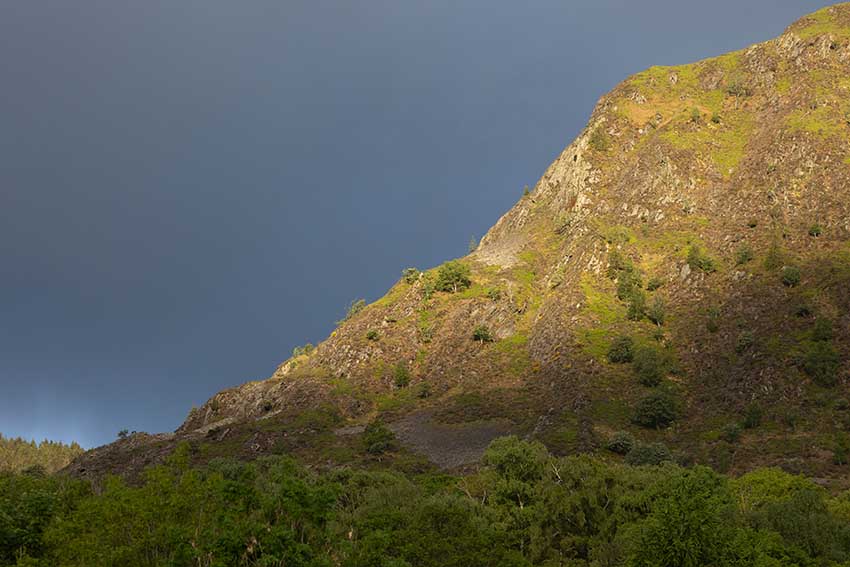 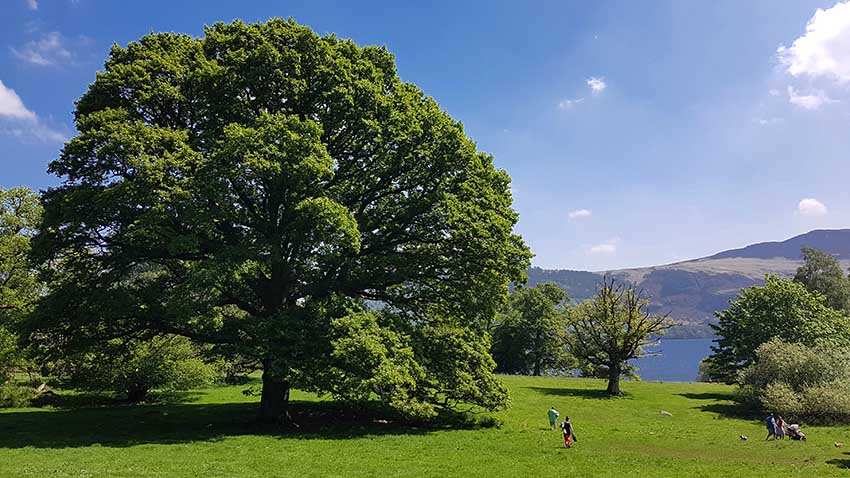 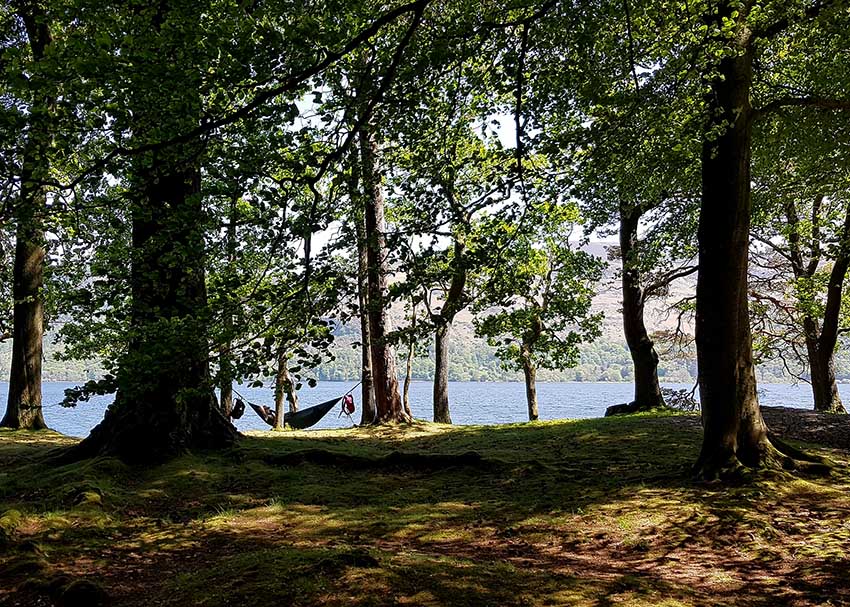 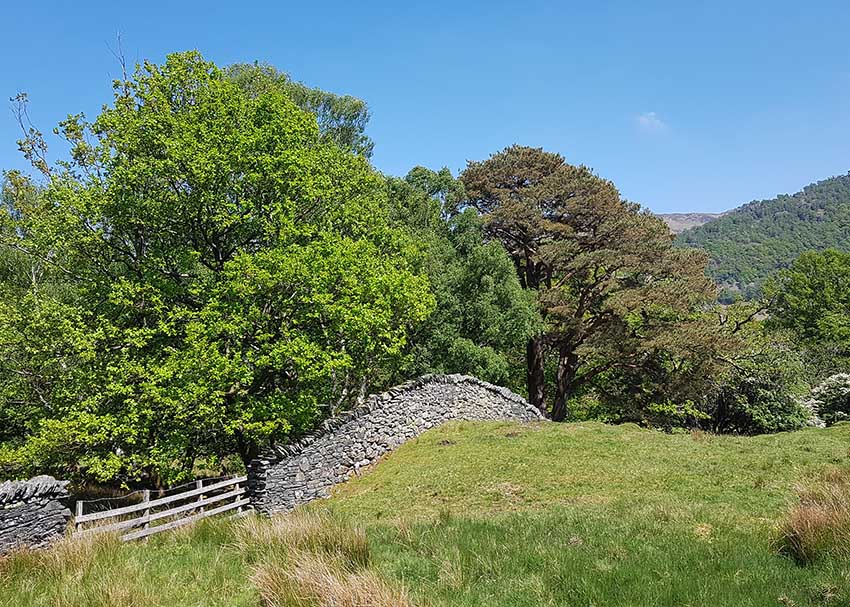 The landing jetties at Keswick. Across Derwentwater are the fells around Grasmoor to the right, Cat Bells to the left and, more or less central, the Newlands Pass to Buttermere. 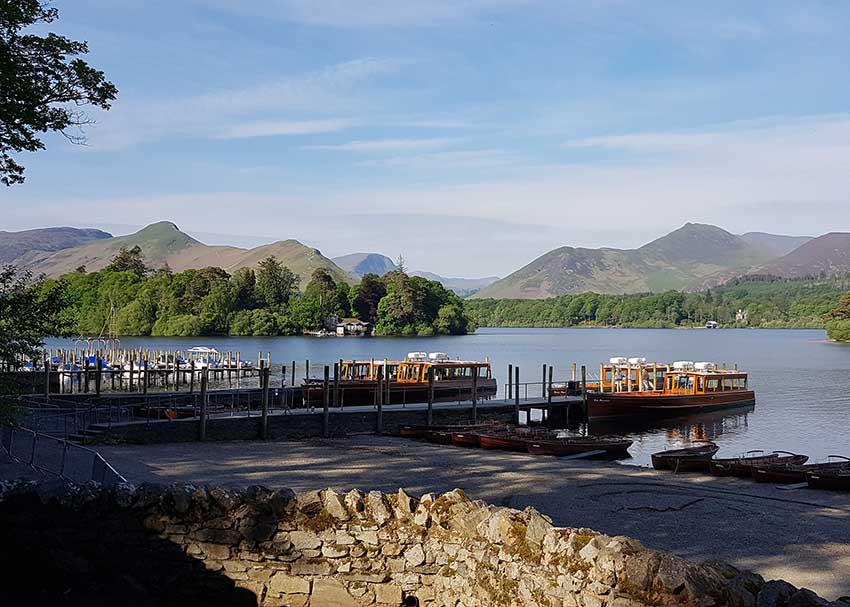 Skiddaw in the distance as the Derwent, having flowed northward through Borrowdale, is about to enter Derwentwater’s southern end to the east of Great Bay. 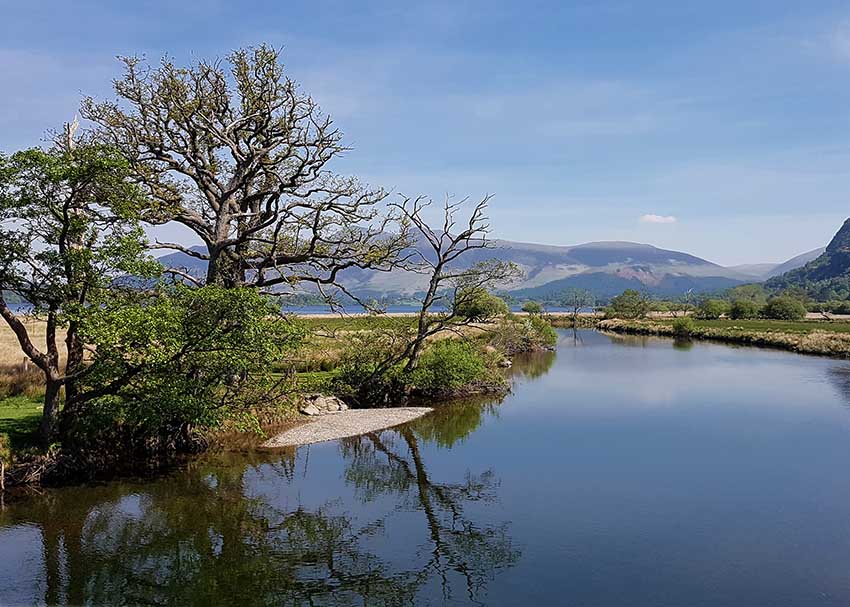 I hope this young lady isn’t intent on ending it all. I’ll see if I can talk her round. 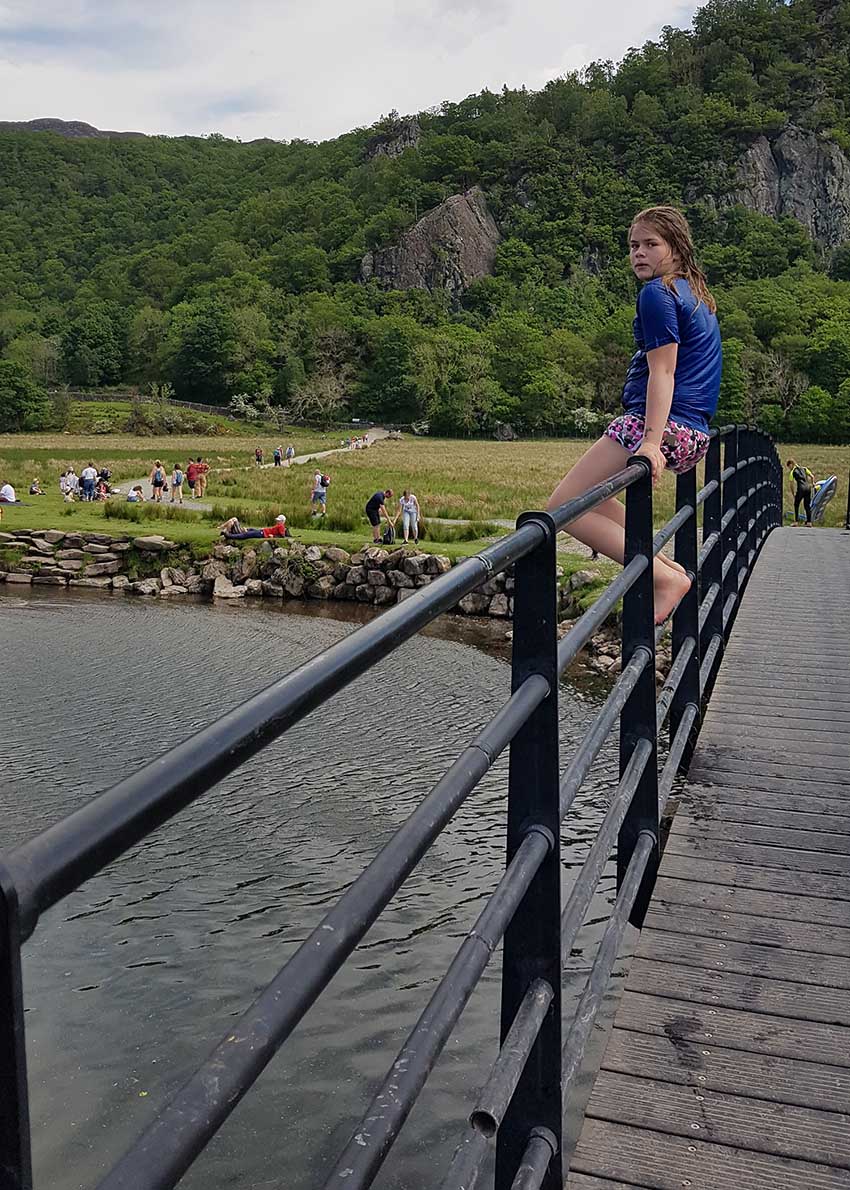 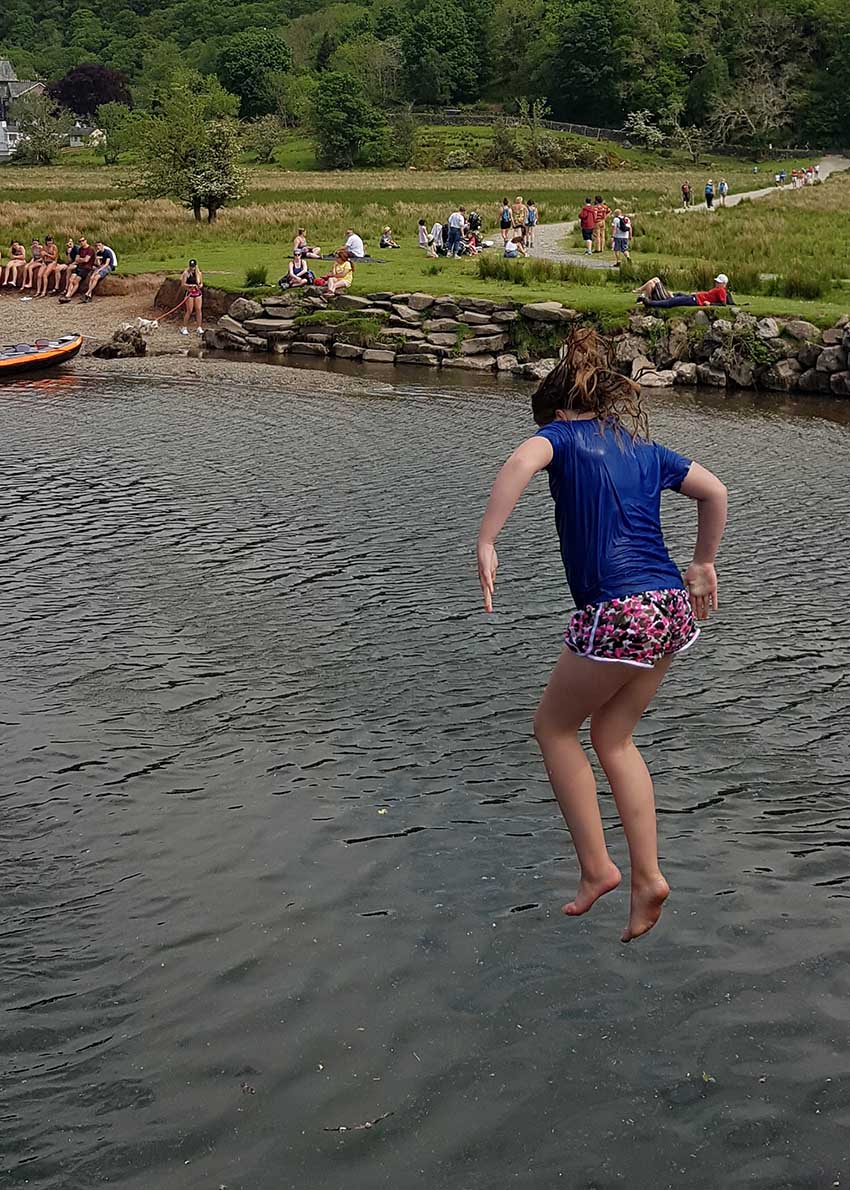 Near Rosthwaite in Borrowdale 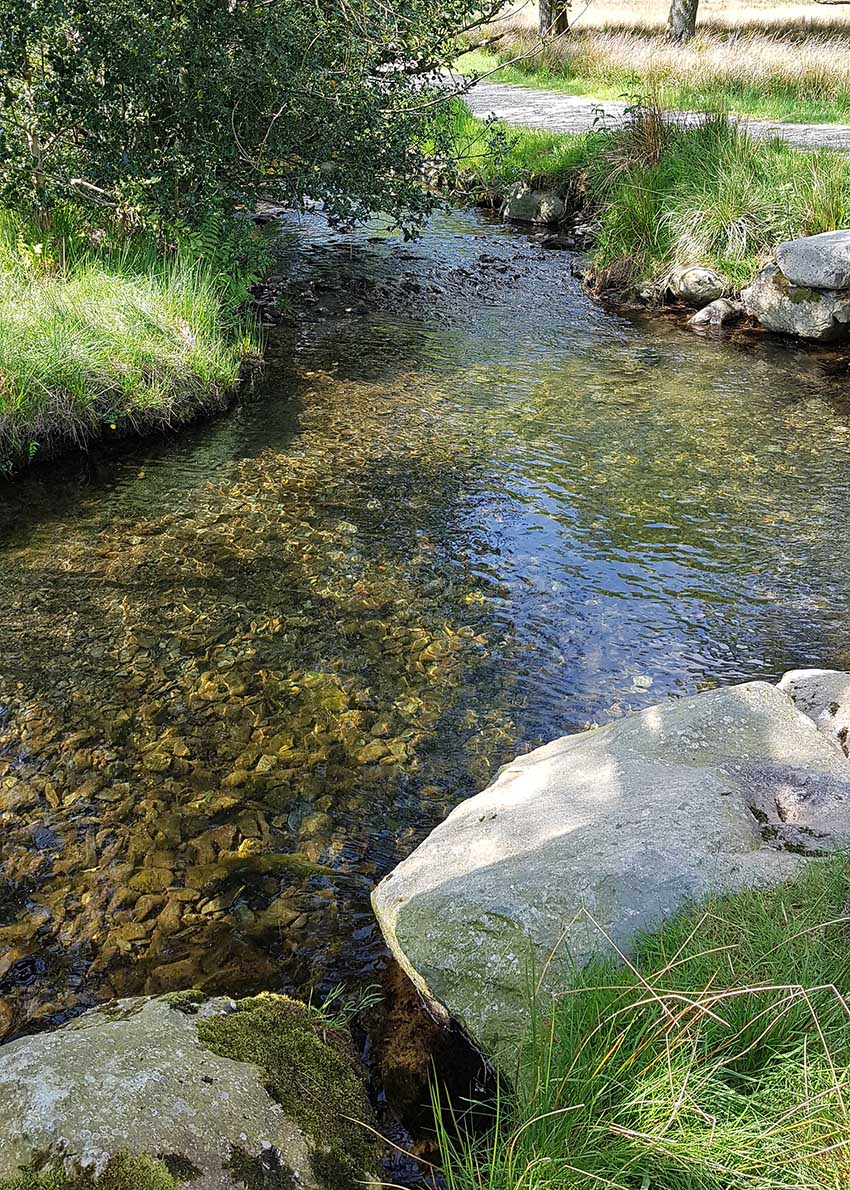 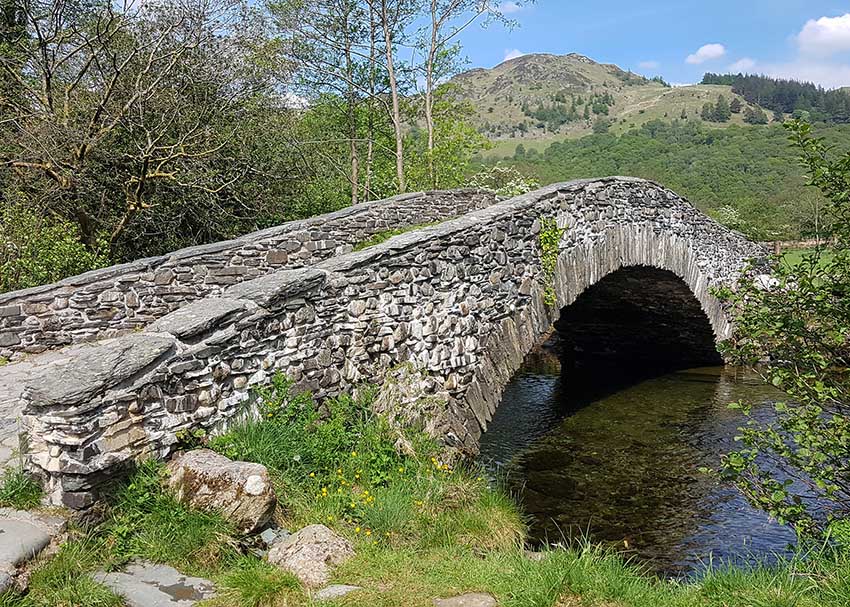 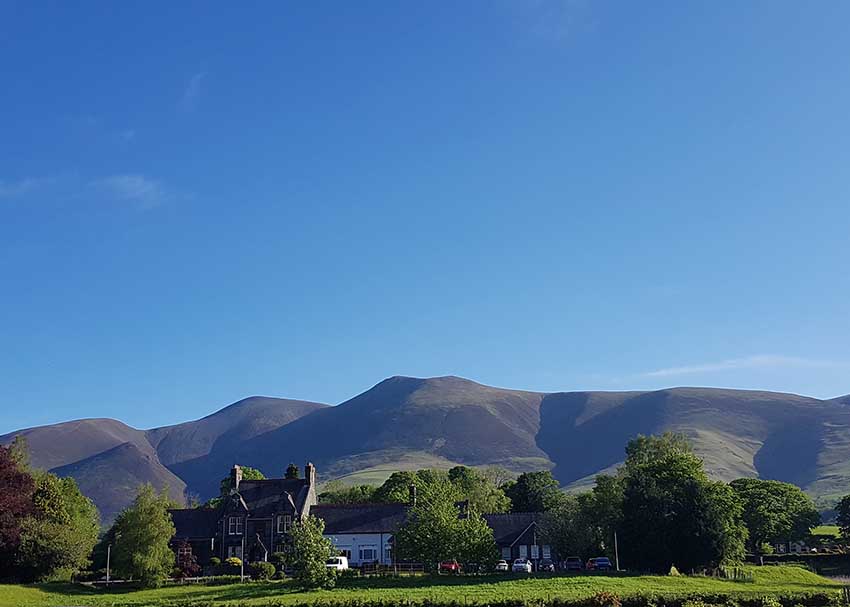 I’m back on Bassenthwaite for a third time, hoping to sight an osprey. (In the event it would take a fourth visit.) A dying sun lights up Dodd Wood on the eastern shore. I have my longest lens – 100:400 plus 1.4 extender for added reach – on my mirrorless Canon R6, a recent move from a slowly dying DSLR technology. So this next shot had to be taken on my Galaxy S7.

Even with the phone-cam’s wider angle I had to pan, in panorama mode, to get it all in.

Same location. Again I deduce the distant hills to be those above Borrowdale. Those to the right at any rate. The more distant ones to the left I take to be the fells between Derwentwater and Ullswater, taking in the Helvellyn range and Striding Edge. 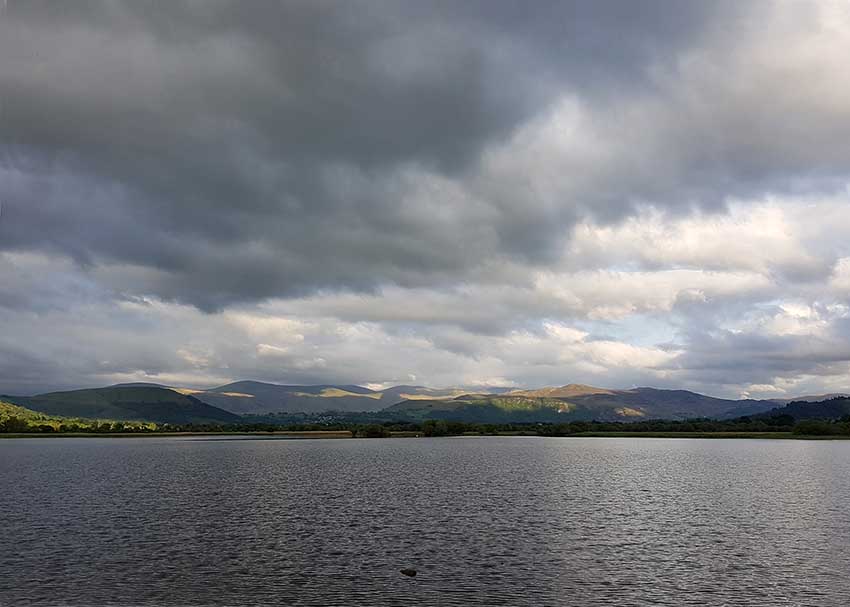 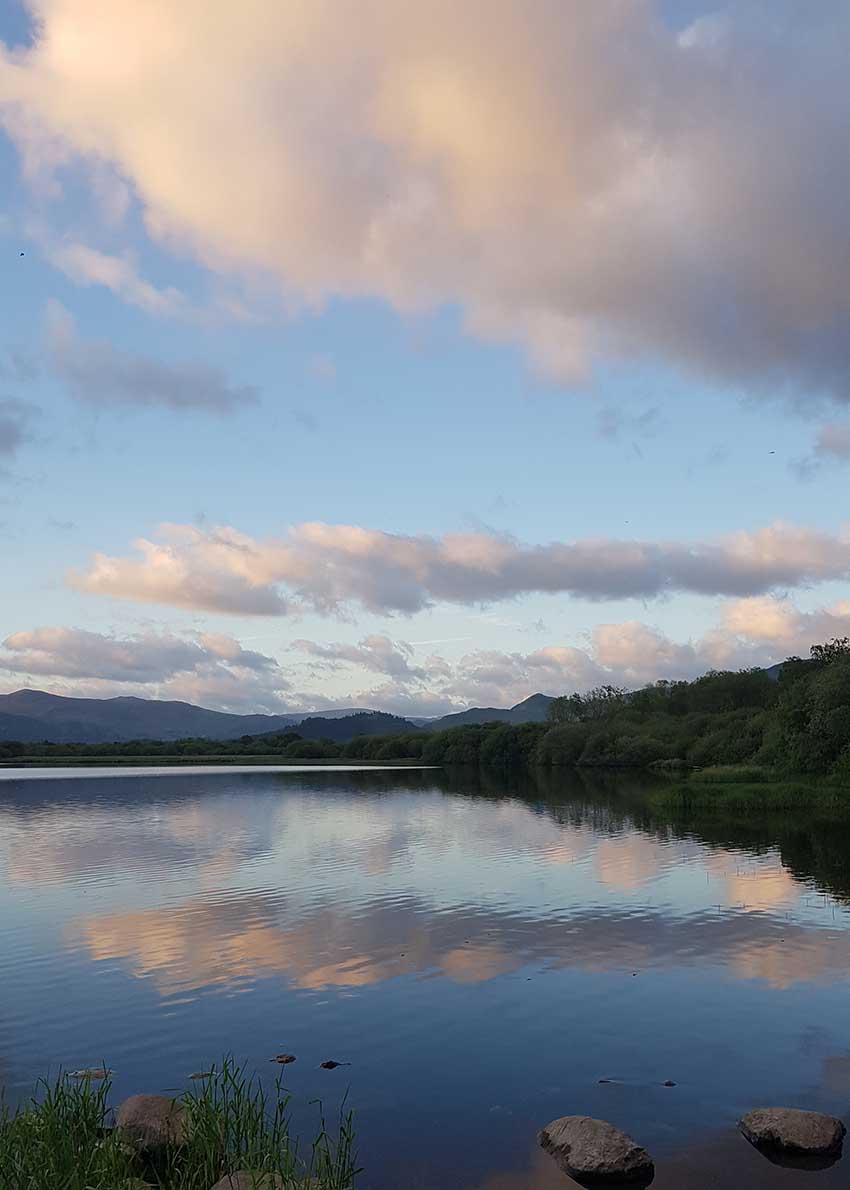 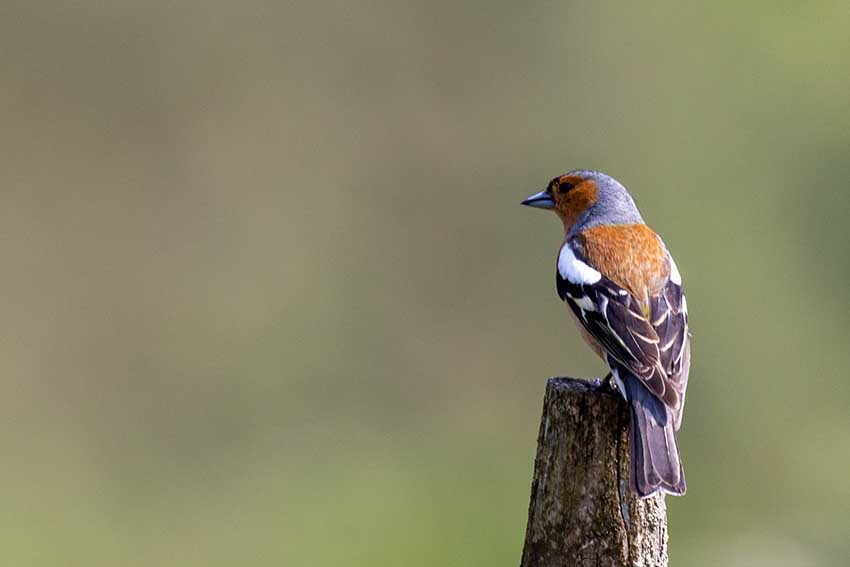