If western mass media were anything remotely resembling what they purport to be, they would be making sure the public understands how badly their government just fucked them. Instead it’s “Oh no, those poor Afghan women.”  Caitlin Johnstone 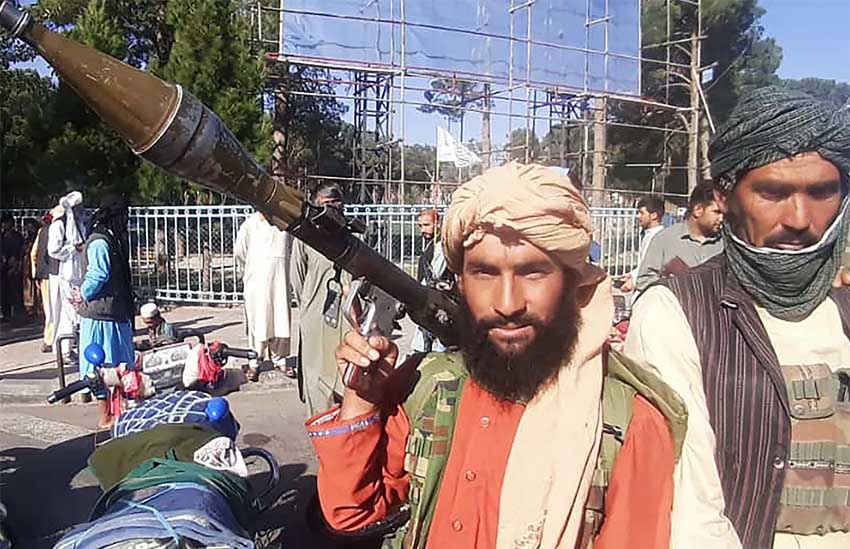 It works every time. As ‘quality’ media like the Guardian pump out piece after anguished piece on the fate of Afghani women – their US ‘protectors’ having done a Saigon ’75 – we are invited to believe the latter’s twenty year occupation of a country on the far side of the planet an act of solidarity with its brown skinned sisters.

​​Or if that’s too big ​an ask, too huge ​a leap of faith​, ​​​it’s enough that we regard Pentagon motives as the lesser question. What matters is – ta-da! – Afghan Women Good … Taliban Baad … US presence ​(with moderate Islamist allies) ​regrettable but necessary …

And millions of decent, educated otherwise intelligent people buy it. Without ever asking why the Pentagon would spend trillions of dollars, and snuff out thousands of lives, to bring feminist values to this mineral rich, geostrategic hotspot.

In fact millions of decent, educated otherwise intelligent people buy this kind of crap all the time. (I certainly did, before Libya then Syria woke me from my pleasant slumber.)  Believing at some level of consciousness, in spite of oceans of evidence to the contrary, that a US-led West has the moral authority to police the planet saves us having to think – or even look at a map of where the horror show in question actually is, and how it might serve a bigger agenda.

In May 1974 I crossed over from the Shah’s Iran into Afghanistan to hole up in Herat, where RPG man poses in the opening image: though I doubt even his parents would have been born, while the late Taliban leader Mohammed Omar – the one-eyed Mullah – had just turned fourteen the previous month. Who knows, maybe he served me a glass of chai or bowl of curds one time in a Kandahar eatery. He’d have had two eyes then.

On which piece of personal trivia (for all my travel writings I’ve yet to speak of this amazing land, from which I have a tale or two still untold) I’ll hand over to two very different writers.

The first is Caitlin Johnstone (yes, again) on the narrative management of this tragicomedy. On her site today she asks us to Stop believing US military invasions have noble motives.

I love how everyone’s just pretending the Afghanistan Papers never happened and the Taliban takeover is some kind of shocking tragedy instead of the thing everyone knew would happen because they’ve been knowingly lying about working to create a stable government this entire time.

If the US had a free press and was anything like a democracy, the government wouldn’t be getting away with squandering thousands of lives and trillions of dollars on a twenty-year war which accomplished literally nothing besides making assholes obscenely wealthy. 1

Thousands of human lives. Trillions of dollars. If western mass media were anything remotely resembling what they purport to be, they would be making sure the public understands how badly their government just fucked them. Instead it’s just “Oh no, those poor Afghan women.”

War apologists talk about “doing nothing” like that’s somehow worse than creating mountains of human corpses for power and profit. “We’ve got to DO SOMETHING about the Taliban! We can’t just do NOTHING!”

Uhh, yes you can. Please for the love of God do nothing. Doing nothing would be infinitely better than more military interventionism in a nation you’ve already tortured for twenty years for no valid reason.

People who think US interventionism solves problems just haven’t gone through the mountains upon mountains of evidence that it definitely does not. Nobody honestly believes the US needs to invade every nation in the world with illiberal cultural values; they only think that way with Afghanistan due to war propaganda. And women’s lives in Afghanistan have still been shit under the occupation.

They had twenty years to build a stable nation in Afghanistan. Twenty years. If you believe that’s what they were really trying to do there, or that results would be any different if you gave them twenty more, you’re a fucking moron …

Well you don’t want to be one of those, do you? Why not hear her out in full?

My second author is, like Caitlin, no stranger to this blogsite. Just over a month ago, on July 8, I hosted extracts of his Asia Times piece, A Saigon Moment in the Hindu Kush. Two days ago he wrote an update, A Saigon Moment looms in Kabul. Pepe Escobar, whom I rate as one of the most important voices on Eurasia’s rise and Empire’s panicked responses, begins thus:

August 12, 2021. History will register it as the day the Taliban, nearly 20 years after 9/11 and the subsequent toppling of their 1996-2001 reign by American bombing, struck the decisive blow against the central government in Kabul.

In a coordinated blitzkrieg, the Taliban all but captured three crucial hubs: Ghazni and Kandahar in the center, and Herat in the west. They had already captured most of the north. As it stands, the Taliban control 14  provincial capitals and counting.

First thing in the morning, they took Ghazni, which is situated around 140 kilometers from Kabul. The repaved highway is in good condition. Not only are the Taliban moving closer and closer to Kabul: for all practical purposes they now control the nation’s top artery, Highway 1 from Kabul to Kandahar via Ghazni.

That in itself is a strategic game-changer. It will allow the Taliban to encircle and besiege Kabul simultaneously from north and south, in a pincer movement.

Kandahar fell by nightfall after the Taliban managed to breach the security belt around the city, attacking from several directions.

He opted to engage in an elaborate deal, convincing the Taliban to allow the remaining military to retreat to Kandahar airport and be evacuated by helicopter. All their equipment, heavy weapons and ammunition should be transferred to the Taliban.

Afghan Special Forces represented the cream of the crop in Kandahar. Yet they were only protecting a few select locations. Now their next mission may be to protect Kabul. The final deal between the governor and the Taliban should be struck soon. Kandahar has indeed fallen.

After continuing the Vietnam parallel by likening what is happening to the NVA’s Tet Offensive in 1968, Pepe moves to the bigger aspects:

Diplomats are already hinting that if the Taliban topple Ghani in Kabul, they will be recognized by Beijing as the legitimate rulers of Afghanistan – something that will set up yet another incendiary geopolitical front in the confrontation against Washington.

As it stands, Beijing is just encouraging the Taliban to strike a peace agreement with Kabul.

Beijing will certainly want the Taliban not only to desist from cross border meddling in Xinjiang – as will Moscow vis a vis Chechnya – but to stop other Islamist groups doing that. (Quite the opposite, in fact, of what the Americans would be after.) For its part a beholden Taliban will be inclined to comply. Excepting Baluchistan/Pashtunistan – considered near the end of Pepe’s piece – its aims have never been expansionist.

A reality hardly likely to change given all that Beijing can offer. Afghanistan’s signing up for Belt and Road can give the east-west New Silk Road a southbound spur: a direct route through this landlocked country before crossing the narrow strip of south-east Iran to reach the warm water port of Gwadar, west of Karachi on the Persian Gulf. That promises an economic uplift which 20 years of US occupation, for all those trillions of dollars, never even tried to deliver.

I am not blind to the suffering of women in Afghanistan – or Gaza or Saudi Arabia. Nor should anyone be blind to the truth that other than for their hideous PR machine, such suffering counts for nothing with Washington, Paris, London etc. Their record of dealing with the Devil himself if it advances the investor classes who rule shows that, so long as it can be kept at arm’s length to minimise blow-back, no barbarity in the global south has ever been too morally repugnant.

Will the Taliban return to hanging adulterers in football stadiums? Lashing women for teaching their sisters to read? They might. But the West has neither the power nor the moral authority to stop them. And given its bloody failures – I’m being kind here – I’ve more faith in realpolitik and the moderating influences of China than I ever will in either the covert US forces we can be sure remain in the country, or the know-nothing angst of lifestyle columnists in the West.