Yesterday the centre-right Nikkei Asia ran this on its website: 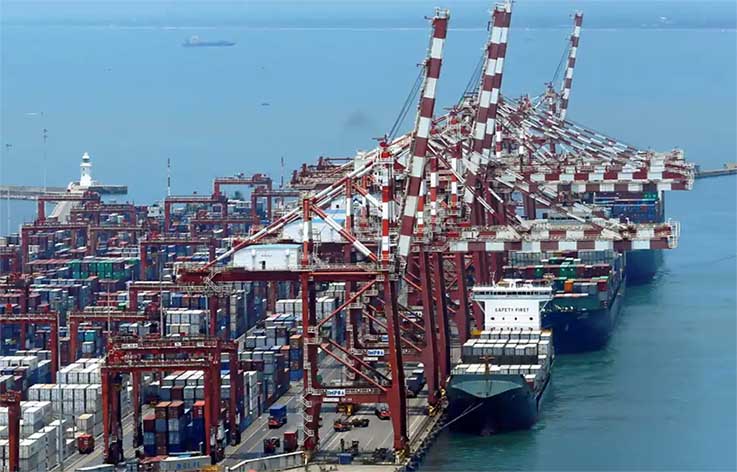 Shipping containers at the main port of Colombo. Sri Lanka’s location in the Indian Ocean and deep harbors make it strategically important under China’s Belt and Road infrastructure initiative.

Sri Lanka will tap a Chinese company for a port project in Colombo, previously awarded to Japan and India before the partnership was scrapped early this year.

The decision highlights Colombo’s balancing act and comes a month after India’s Adani Group was awarded another deal worth over $700 million to develop the West Container Terminal at the Colombo port. President Gotabaya Rajapaksa has said he wants “neutral” relations with India and China as the nation struggles with a shortage of foreign currency.

His cabinet on Tuesday agreed to have state-run China Harbour Engineering develop the Eastern Container Terminal while stipulating that local authorities would handle all operations. It cited recommendations by a cabinet-appointed committee as the basis for the decision.

The apparent pro-China tilt of Rajapaksa’s government is seen as a factor in the change of plans. Beijing has invested heavily in projects on the strategically positioned island under its Belt and Road infrastructure initiative.

Sri Lanka had signed a memorandum of understanding with Japan and India in May 2019, under previous President Maithripala Sirisena, to jointly develop the Colombo terminal. The operating company would be 51% owned by the Sri Lankan government, the rest by Japan and India.

Rajapaksa, who took office in November of that year, indicated at first that the project would stay on course.

That changed this past February, when the cabinet decided that the operating company would be wholly owned by Sri Lanka, pushing Japan and India out of the project. Tokyo called the unilateral move “regrettable.”

China continues to finance Sri Lankan infrastructure, taking control of projects such as roads and ports in the process. Concerns have been raised that this support is pushing the country into a debt trap, as was seen in a 2017 lease deal of the Hambantota port in the southern coast of the island. The previous government leased it out to a Chinese state-run company for 99 years, in return for $1.1 billion as a part of Colombo’s efforts to repay debt to China.

Other than light edits for brevity, the piece is replicated here in full.

The self appointed Media Bias/Fact Check site gives Nikkei Asia a “high” on factual accuracy, second only to “very high” on its 6-pack scale. (The Guardian gets the fourth rating, “mixed”.)

Make of that what you will. But do bear in mind that Media Bias/Fact Check, funded by a mix of donors and advertisers, is subject to the same corrupting forces as the media it assesses.

Which means that, like the ‘quality’ press, it’ll be reliable as long as the stakes are not too high for ruling interests. The key is in that reliance on advertisers and on donors.

So on many issues Nikkei Asia will outperform the Guardian – easier than many suppose – on factual accuracy. But the challenge to the US “rules based order” posed by China rising sends the stakes into the stratosphere. Which means that accuracy – yes, even for Nikkei Asia – takes second place, a reality at work in the piece’s two closing sentences.

Concerns have been raised that this support is pushing the country into a debt trap, as was seen in a 2017 lease deal of the Hambantota port in the southern coast of the island. The previous government leased it out to a Chinese state-run company for 99 years, in return for $1.1 billion as a part of Colombo’s efforts to repay debt to China.

I don’t doubt the final sentence’s accuracy. The dishonesty is in the sequence; in the implication that it both exemplifies and proves the unattributed assertion of the preceding sentence. In an October post on Guardian coverage of China, I wrote:

The use of such smear constructs as “has been accused of …” – variants include “it is thought that …” and “sources say …” – are evidentially worthless. But when they chime with overarching narratives they do their work on the more dimly lit corridors – no smoke without fire – of consciousness.

As does a construct like “concerns have been raised …” At best that’s rank bad journalism. But given the context of an overwhelming Sinophobic media climate, I’m disinclined to chalk this up to mere sloppiness.

Whatever. On the China-debt trap allegations in general, Hambantota Port in particular, I offer The Chinese ‘Debt Trap’ Is a Myth, by two US academics. One is Professor Meg Rithmire of  Harvard Business School. The other is Deborah Brautigam, Professor of International Political Economy in the School of Advanced International Studies at Johns Hopkins, and Director of the China Africa Research Initiative at the Paul H. Nitze School of Advanced International Studies.

Call me perverse but I place rather more trust in these two than in a staff writer at Nikkei Asia; regardless of the “high” accuracy rating conferred upon the latter by a murkily funded – and self anointed – fact/bias checker site.

Caitlin Johnstone recently wrote that we’re sleepwalking into nuclear war. A zillion slur pieces like this Nikkei Asia offering do daily duty to keep us somnambulating in the direction required. By whom? By ruling elites who’ll see Armageddon unleashed before they’ll surrender their self-conferred licence to plunder and trash the planet for private gain.

3 Replies to “Sri Lanka and the ‘debt trap’ slur”