Octogenarian House Speaker Nancy Pelosi has decided to spend her final years on this mortal coil trying to start World War Three, pushing the Biden administration to designate Russia an official “state sponsor of terrorism” and planning a freakishly incendiary trip to Taiwan just in the last few days.

Beijing has made it clear that the first visit to Taiwan by a major US official in decades would be seen as an aggressive escalation and an egregious transgression of Washington’s official one-China policy.

“The U.S. side is wrong to believe that it can continue to flagrantly disregard the feelings of the Chinese side on Taiwan without more serious consequences,” a Chinese official told the Washington Post in response to the news of Pelosi’s planned trip in August, adding that “actors like Nancy Pelosi are committed to destabilizing China under the guise of morality” and that Pelosi has “openly threatened China’s development.”

Chinese state media put it even more bluntly, stating, “Pelosi’s Taiwan visit is a blatant provocation which will surely be met with a forceful response from China, including unprecedented military pressure. She is creating a dangerous moment, placing us on the brink of war. Nobody can guarantee there will be no mishaps.”

Pelosi’s insane escalation is finding support from some of the worst people on this planet, many of them from the other side of America’s illusory political divide.

“Nancy, I’ll go with you,” tweeted the Trump administration’s warmongering secretary of state and CIA director Mike Pompeo. “I’m banned in China, but not freedom-loving Taiwan. See you there!”

“Let Pelosi go to Taiwan,” tweeted Trump’s bloodthirsty National Security Advisor John Bolton. “It will tell us a great deal about who actually controls American foreign policy: Washington or Beijing. Doing anything more than blustering is far riskier to them than to us.”

“It is my personal view that the one-China policy has outlived its usefulness, that it is time to move away from strategic ambiguity,” the Trump administration’s secretary of defense Mark Esper said in the wake of the news of Pelosi’s visit during a meeting with Taiwanese President Tsai Ing-wen.

“I think it’s important that we begin that national discussion [on strategic ambiguity] back in the United States. It would help us educate the American people if we can also point to bold decisions being made in Taipei,” Esper added, an apparent call for open domestic propaganda about the issue.

“I think China should not have any say over where American officials travel. I think if the Speaker wants to go she should go,” Esper said on CNN’s New Day.

“Would it surprise you to learn that Nancy Pelosi got a round of applause at a meeting of the Trump-backed America First Policy Institute?” journalist Michael Tracey tweeted from the meeting on Monday. “Because that’s exactly what just happened, when Newt Gingrich declared support for her upcoming trip to Taiwan.”

“Speaker Pelosi should go to Taiwan and President Biden should make it abundantly clear to Chairman Xi that there’s not a damn thing the Chinese Communist Party can do about it,” Republican Senator Ben Sasse said on Monday. “No more feebleness and self-deterrence. This is very simple: Taiwan is an ally and the speaker of the House of Representatives should meet with the Taiwanese men and women who stare down the threat of Communist China.”

Taiwan is in fact not a formal ally under current US policy, but that’s exactly what all these calls to abandon the one-China policy and strategic ambiguity are geared toward changing.

Sasse’s comments are particularly annerving because they suggest that if the Biden administration does anything to deter Pelosi’s Taiwan brinkmanship it will be weaponized by the GOP to attack Biden as a puppet of Xi Jinping. This would be an exact inversion of the way the Democratic Party spent four years using accusations of Kremlin loyalty to put political pressure on the Trump administration to ramp up cold war escalations against Russia, which helped pave the way to the dangerous aggressions between those two nuclear powers we now see today.

We’re already seeing these frenzied accusations of Beijing loyalty from Republican spinmeisters like Tucker Carlson, which is something I warned would happen under a Biden presidency before the 2020 election. 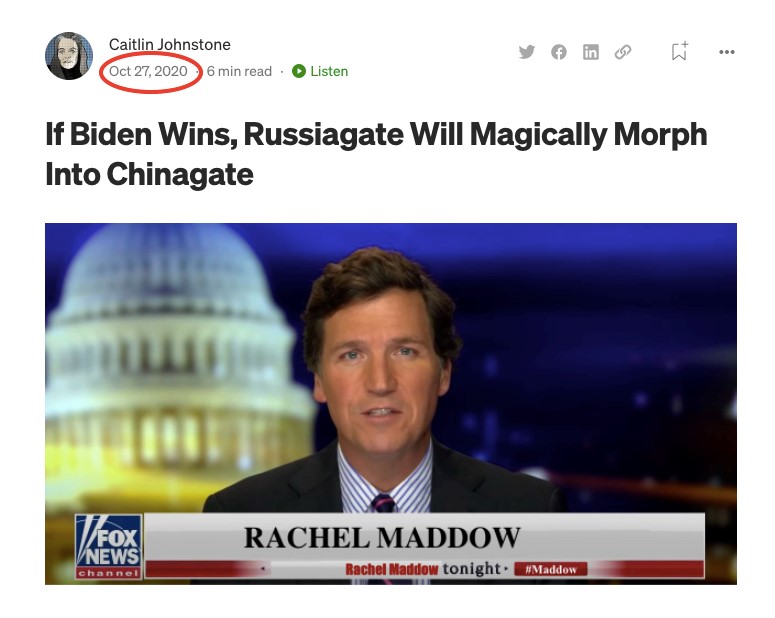 When it comes to China, the so-called “populist right” is in lockstep with both Nancy Pelosi and with murderous neoconservatives like Bill Kristol, Max Boot and John Bolton. Steve Bannon’s support for regime change in Beijing is indistinguishable from Bill Kristol’s support for regime change in Beijing. You will never, ever see a Trump supporter address this perfect harmony between their faction and neocons and liberal hawks with any degree of intellectual honesty.

In reality, though Democrats tend to lean more toward supporting aggressions against Russia while Republicans lean more toward favoring aggressions against China, they’re both just manufacturing consent for the same unipolarist agenda of total global domination. They pretend to be on opposing sides, but if you ignore the narratives and just look at the actions what you see is a steadily escalating “great power competition” designed to facilitate the US empire’s longstanding agenda of securing unipolar planetary hegemony at all cost.

The drums of war are growing louder and louder, and the psychopaths who feed off it are growing more and more aroused. Let’s hope this evil empire ends as soon as possible in as peaceful a manner as possible, before these freaks get us all killed.

8 Replies to “Caitlin on Nancy Pelosi’s trip to Taiwan”