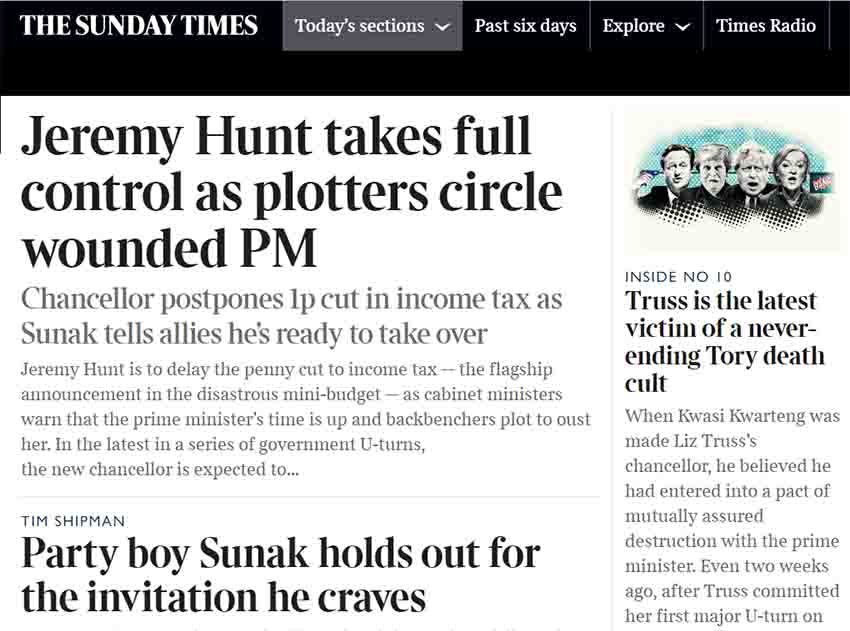 Media speak of a double crisis having hit Britain since Kwasi Kwarteng, sacked on Friday after thirty-eight days 1 as Chancellor of the Exchequer in an attempt by his boss (as futile as it was cheap and nasty) to save her own neck, announced their catastrophic mini-budget. On this view of things the country is in the grip of both an economic crisis and a political one.

In actuality there’s only one crisis and it’s political. It always is.

In purely fiscal terms Kwarteng could have “balanced the books” on September 22 by slashing benefits, savaging what’s left of the NHS and raising state pension age to 99. But the markets would still have reacted as they did because neither they nor anyone else would have bought the fanciful notion that he and Truss had the political clout to pull off such things in the face of fury across their own party, never mind beyond it. See my post of October 14, Zugzwang for TrussTweng.

I’m not getting into the debate here around whether any “books” need to be “balanced” when sterling is a fiat currency. I have an uneasy relationship with modern monetary theory because, while I buy its key premise – that governments with fiat currencies do not tax in order to spend; rather, they print money as needed and then tax to control inflation – I find so many MMT gurus politically naive, 2 and am unsure of my ability to sift the wheat from the chaff of their thinking.

Rather, I’ll speak here as if the books do need to be balanced by Kwarteng’s successor, Jeremy “Seven Pads” Hunt.

Unlike his predecessor, the new chancellor doesn’t have a boss. Not one going by the name of Liz Truss, he doesn’t. A quick scan of UK media today, from Guardian and Independent to Mail and Telegraph, shows Truss to be a zombie prime minister; Hunt the real one in all but name.

Albeit of the decidedly caretaker kind.

So here’s where Seven Pads and whoever comes next can balance the books:

A force 10 windfall tax on this cluster of privatised monopolies, with their nonsensical pricing formulae.

End the proxy war in Ukraine, its economic front hurting Russia not at all, but causing great suffering to Europeans while binding their craven leaders ever more tightly to the US Empire.

Liz’s largesse being entirely regressive, redirect that £100-150bn in “handouts” to those in need.

Bring the whole sector back into public ownership.

Last year Britain spent over £50bn on “defence”. It faces no credible threat of attack or invasion but does have (a) a ruling class with imperial demands to enforce, whatever the cost to humanity; (b) a for-profit armaments sector through which large transfers of wealth from the many to the few are effected.

What’s that you say, politically impossible?   Well didn’t I say as much in my second paragraph? Nothing is purely economic; everything is political. Britain is not a democracy in any meaningful sense of the word but, while I have no blueprint for changing that, a healthy start can be made by dropping the evidence-defying denial of the truth that, like the rest of the “Free World”, it is ruled by and for a tiny elite.

Massively aided by corporate media and His Majesty’s Loyal Opposition – FFS, neither can even acknowledge the reality of UK vassalhood to the US empire! – that denial is at pandemic levels.

I’ll give the penultimate word to WSWS, with whose outlook – story of my life – I also have an uneasy relationship:

Truss’s replacement will be expected to restore confidence in the UK economy by savaging the working class. And if the Tories cannot fix their mess to the satisfaction of the financial oligarchy, the Labour Party promises to step in …

And I’ll close, for the second time in two days, with a comment by regular reader, bevin:

3 Replies to “Two ways Hunt can “balance the books””