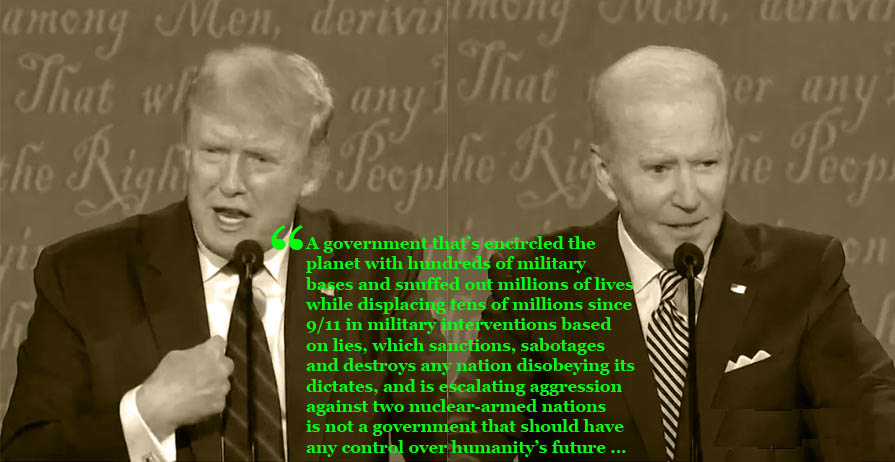 If Vladimir Putin were every bit the election-meddling demon the Democrats say he is, and if he had unlimited time and unlimited resources to create the perfect ninety-minute propaganda video to discredit the US-led unipolar world order, he could not have designed one more effective than the performance that was just delivered by President Donald Trump and Democratic nominee Joe Biden with the help of moderator Chris Wallace.

I mean, it had everything. Both candidates yelling over each other the entire time, Biden telling the sitting president of the United States to shut up on live television, Trump at one point saying the Proud Boys should “stand back and stand by“, Chris Wallace literally shouting to be heard over the unceasing interruptions, Biden getting confused and arguing that the Green New Deal would pay for itself and then turning around saying he does not support the Green New Deal, mountains of lies and nonsense, both candidates trying to out-right wing each other, and absolutely no meaningful discussion of policies that will actually help ordinary Americans at all.

It was crazier than any of Trump’s debates in 2016. It was crazier than any presidential debate that has ever happened. You seriously could not have designed a more perfect display to do everything we’ve been told for years that Russian propagandists are trying to do: depress the vote, encourage support for third parties, weaken public trust in America’s institutions, and humiliate the United States on the world stage.

The world is going to be talking about this for a while now. Clips from this debate are going to share widely all across the planet. It will be translated in many languages. Articles will be written about it for days. And people who’d never thought to question whether this is the government that should be leading the world into the future are suddenly going to find themselves contemplating that question.

And hopefully the next one will be even worse.

It is good for the US empire to invalidate itself in this way. The government that has encircled the planet with hundreds of military bases and snuffed out millions of human lives while displacing tens of millions since 9/11 in military interventions that were based on lies, which sanctions, sabotages and destroys any nation which dares to disobey its dictates, and which is escalating world-threatening cold war aggressions against not one but two nuclear-armed nations is not a government that should have any control over humanity’s collective future.

The uglier a face that appears on this murderous empire, the better it will be for everybody. In a government that is intrinsically evil and destructive from root to flower, an attractive face with competent management is the last thing anyone should want.

It doesn’t matter who won this accidental Kremlin propaganda performance of a debate. It doesn’t even matter who wins the election; the most evil aspects of the US government will continue unhindered regardless of which oligarchic puppet wins in November. What does matter is that the dark, ugly aspects of global power that people had previously not noticed are being drawn into the spotlight and seen by everybody. 2020 seems to be a good year for that.

If the imperialists who run things have any sense they will find a way to cancel future debates in the name of national security, because they’re the ones who will be worst affected by them. Here’s hoping they don’t, though.

4 Replies to “Caitlin on the Biden-Trump ‘debate’”