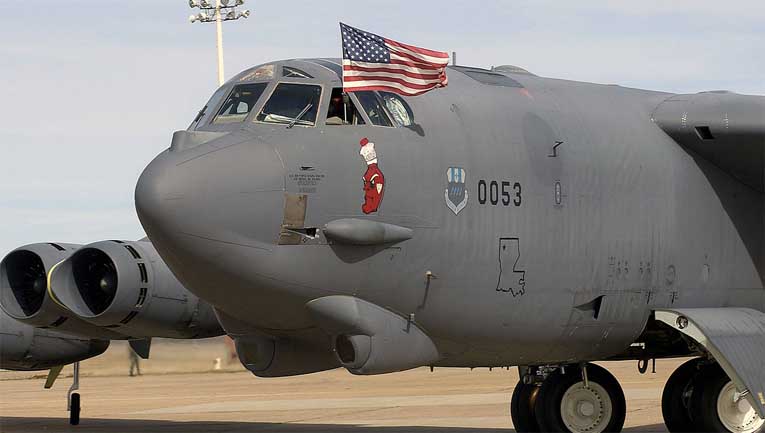 Not being a regular reader of Jane’s Aircraft I was surprised by Stephen Gowans’ references, in his What’s Left? post three days ago, to B-52s. For my generation this bomber gained global notoriety in the skies over Vietnam.

And even more infamously over Cambodia, whose carpet-bombed hysteria created, as a young John Pilger argued, optimal conditions for men in black pyjamas with neither popular support nor power base within the country to take control. Like aliens in some creepy sci-fi, the moment the bombs stopped the Khmer Rouge stepped silently from the forest to evacuate Phnom Penh at gunpoint and – claiming this to be in some unfathomable way a Marxist thing to do – reset the calendar to Day One and implement a cashless dystopia.1

(Not that any contender for rule in this former French colony would have been spoilt for choice. A Ho Chi Minh Trail snaking westward to suck her into the deepening morass of America’s war on the Vietnamese people, and the brainwave of Richard Nixon to hit back with the B-52s while lying to Congress about it, had pretty much closed off all the humane options for a traumatised country with no way of feeding itself.2)

But I’d assumed the B-52 a relic of history like the Bubble Car or Baby Austin, once daily sights on our roads. I felt nerdily impelled to look this up. Sure enough, in updated form it still runs an aerial death delivery service for Uncle Sam, though as a symbol of US Might it’s been overtaken by stealth bomber, cruise and tornado. These will soon be joined if not eclipsed by fast evolving drone technologies, their game-changing lethality recently and generically demonstrated – see the second of my December reads – by Turkey’s Azeri proxy in Nagorno-Karabakh.

We should take care to avoid reductivism in attributing motives for America’s apex predations (with France, Britain, Canada et al as subaltern sharks). But a transfer of $700-800bn per year from America’s many to America’s few, effected by military-industrial complex and IRS, can’t be ignored. This does not negate Mr Gowans’ point, about US thirst for Full Spectrum Dominance as method of choice for advancing its imperial interests. Rather, the two are complementary.

Need America’s rulers win their endless wars? These are after all not only waged thousands of miles away, on peoples posing no conceivable threat to ordinary Americans, but financed by US taxpayers; a group in which they are kept grossly underrepresented by smart accountants and offshore havens like Britain’s dependencies. Financed too by colossal debt levels premised on limitless issues of never-to-be-redeemed Treasury Bonds. And by a global tax – what France’s Valery Giscard d’Estaing called America’s “exorbitant privilege” – in the form of a dollar riding artificially high on the need for every oil importing country to hold large reserves of it.3

Given these truths, that tiny club which rules America has no urgently pressing reason to rein in its non stop warmongering. In this murderous arena a central Buddhist principle is playing out in monstrous caricature. Said tiny club has found imperial nirvana in the shape of a self-fuelling application of the tenet that Path and Goal are One.

8 Replies to “The Buddhas of Wall Street & Pentagon”