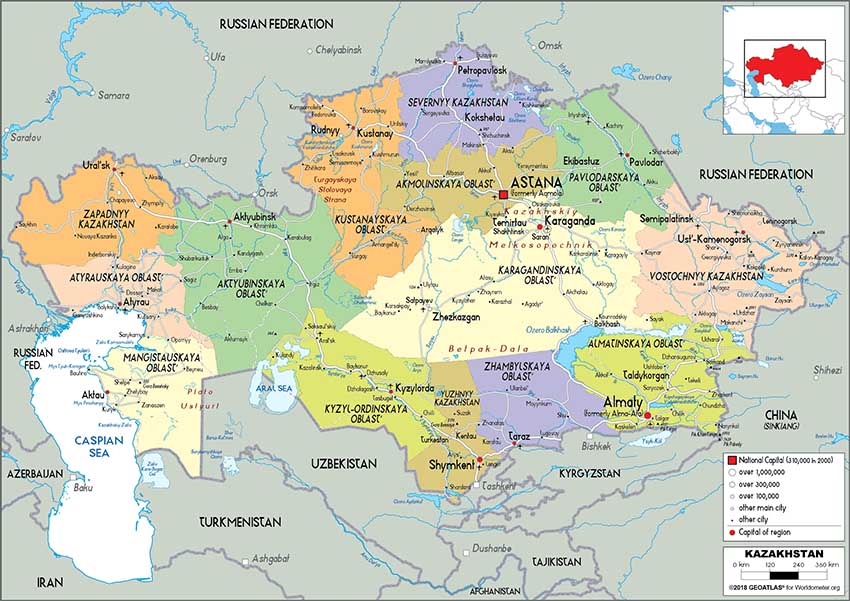 China, understandably sensitive about encirclement, will be forced to act when a shift in the domestic policies of neighbouring countries represent an unacceptable risk to its own security. This mirrors how the US treats Latin America under the ‘Monroe Doctrine’. How can China stay neutral all of the time?

Kazakhstan is one of the first big tests for Beijing in this respect … a strategically crucial state on China’s western frontier; pivotal to Belt and Road, and to China’s own energy security. Beijing simply cannot do nothing and allow the Tokayev government to fall.

Whilst it has no need to impose its ‘ideology’ on the country, it is clearly in its interest to prevent an anti-China regime, motivated by Islamist radicalism, from taking hold, which would threaten the stability of the sensitive Xinjiang region next door. So, China’s non-interference policy is being put to the test.

Beijing’s policy of ‘non-interference’ in other countries has been tested by events in Kazakhstan, with Xi Jinping openly supporting the government. It’s a sign of things to come, further straining relations with the US.

With the crisis in Kazakhstan beginning to stabilise, it’s been fascinating to observe China’s role and how it has been offering support to its government at the most senior level.

An editorial in the Global Times over the weekend also made clear that “China needs security coordination with neighbouring countries over Kazakhstan.”  It was claimed that due to “China’s Belt and Road Initiative and its energy imports, the Central Asian state’s stability represents a high stakes issue.”

Whilst Russia has taken the lead regarding the crisis in Kazakhstan, the consensus in Beijing is that China cannot stand on the sidelines and allow a potentially hostile government to take over in a strategically important neighbour. This puts its decades-old ‘non-interference’ policy to the test and opens up a new dynamic in its own relationship with the United States.

In the post-Mao era, China has strictly followed a policy of non-interference in the internal affairs of other countries. This policy, rooted in China’s own historical experiences, places national sovereignty as a key principle in international affairs.

China does not accept intervention in its own affairs, and nor does it intervene in other states in turn. This policy has won it considerable support among states in the global south, but has also been motivated by China’s need during those decades for a stable relationship with the US and its allies, disavowing ideological and geopolitical competition. It has negated the need to build formal alliances, with the sole exception of North Korea, which for most of recent history was the only state that Beijing was prepared to prop up.

When the USSR collapsed and the Eastern bloc moved away from communism, China publicly accepted the decisions of those states. In a nutshell, Beijing, in principle, aims to avoid imposing its political system or values on others, in stark contrast with the US.

With the benefit of hindsight, this has been a successful policy, to the extent it has allowed China to develop pragmatic and beneficial partnerships with countries of very different dispositions, such as Pakistan or Saudi Arabia.

However, the world is changing. China’s non-interference policy is being placed under strain whether it likes it or not. The US is engaging in competition against it, trying to turn the global geopolitical environment into an ideological battleground. This has the inevitable consequence of making it harder for China to work with democracies, who are more susceptible to American influence. In addition, the US, as part of its ‘Indo-Pacific strategy’, wants to surround China with hostile states, as it is doing to Russia.

This creates the strategic dilemma that China – which is understandably sensitive about encirclement – will be forced to act in certain situations when a shift in the domestic policies of neighbouring countries may represent an unacceptable risk to its own national security. This mirrors how the US similarly treats Latin America under the ‘Monroe Doctrine’. How can China stay neutral all of the time?

Kazakhstan is one of the first big tests for Beijing in this respect. It’s a strategically crucial state, as it sits on China’s western frontier and is a pivotal part of the Belt and Road initiative connecting to Europe, as well as China’s own energy security. So, Beijing simply cannot do nothing and allow the Tokayev government to fall.

Whilst it has no need to impose its ‘ideology’ on the country, it is clearly in its interest to prevent an anti-China regime, motivated by Islamist radicalism, from taking hold, which would threaten the stability of the sensitive Xinjiang region next door. So, China’s non-interference policy is being put to the test.

Beyond verbal support, what can Beijing do to help Kazakhstan? As Russia is taking the lead militarily given it belongs to the CSTO bloc, China does not need to take this option directly. However, Beijing could potentially move to supply the country with equipment, surveillance technology, and police training, aiming to fortify its security resources, as it did recently in the Solomon Islands, following Taiwan and US instigated riots last year.

On an economic level, China may be inclined to push for greater stability in the country by giving it aid and other growth-based incentives. As one expert said in the Global Times, “While the CSTO led by Russia will offer direct support to help Kazakhstan maintain order and stability, China could offer sustainable support for the country to realize long-term economic development and boost effective reform to solve fundamental economic problems that could potentially cause unrest to return.”

Beyond Kazakhstan, other countries where Beijing will feel increasingly inclined to help maintain the status are likely to include Cambodia, Vietnam, Pakistan, Myanmar, Thailand, and Laos. Indeed, pretty much any country on China’s periphery which is not currently a US ally and an anti-China uprising or regime change could be instigated falls into this category – although how far Beijing would be prepared to go remains to be seen.

In many ways, China’s potential ‘interference’ would be geared towards protecting these states from being influenced by other foreign states. Beijing, after all, is not attempting to initiate revolutions in its own favour – in the way it did during the Mao era – and it is unlikely that it would attempt to pursue pro-China regime change in existing US aligned states near it, such as Japan. (Taiwan is deemed an internal affair, and as such is an exception to the non-interference policy).

But the trend is unmistakable. In a Cold War scenario, to simply allow your opponent to gain a political foothold in a country on your doorstep is seen as strategically disastrous, and it would be dangerous for Beijing to allow this to happen.

While it will not pursue a value crusade regarding its own ideology in the same way the West does, and is unlikely to adopt the aggressive militaristic posture of the US, doing nothing is no longer an option and China is increasingly inclined to do more in supporting the states which supplement its interests. One might refer to it as ‘non-interference with Chinese characteristics’.