They’re Enslaving Our Minds And Driving Us Toward Destruction

You know you are being aggressively propagandized about Ukraine by the mass media and by Silicon Valley. You can feel it in your guts. Everyone can feel it, on some level. It feels gross.

The split is between those who trust this feeling and those who choose to psychologically compartmentalize away from it. Because if you don’t compartmentalize away from it, the implications are very frightening. It means pretty much everything you’ve been told your whole life about the government, about your nation, about the news media, and about the way the world works, has been a lie.

But that is the basic reality. If you’ve already seen this, you won’t experience cognitive dissonance when you observe it in the unprecedented imperial narrative management campaign we’re seeing with Ukraine. If you haven’t seen it, you’ll likely experience a lot of cognitive dissonance if you try to square your gut feeling of being propagandized about Ukraine with your belief that your favorite politicians and news sources always tell you the objective truth. And you will compartmentalize accordingly.

That’s how we’re wired: to select cognitive ease and forcefully reject information which challenges our present worldview. Pushing past the cognitive discomfort and facing reality is the only way to come to real understanding.

Look at this picture: 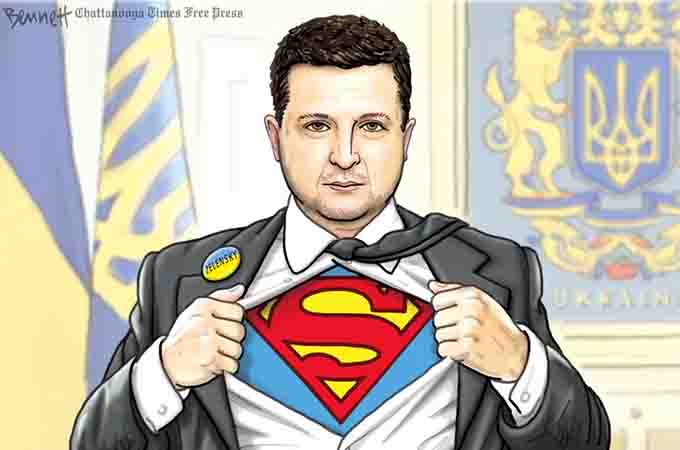 If this picture was printed out and framed, and then used as a bludgeon to bash you in the face whenever you looked at an electronic screen, it would feel how all this Ukraine war propaganda feels when you haven’t swallowed the official narrative.

People get outraged when I say we are being aggressively propagandized about Ukraine, but this fact is not seriously in dispute. The mass media have been straightforward about it, though of course they fail to mention their own role in the propaganda campaign.

It seems like those who are new to the concept think that “propaganda” means making up fictional stories whole cloth, so they mistakenly assume that this is a claim that Russia never invaded and Ukrainians aren’t dying and suffering. But all it really means is that the narrative framing is manipulated. They’re not lying that there’s a war, they’re just manipulating the way people think about the war. How it’s happening, who’s to blame, whose agendas are served by getting it started and keeping it going, etc.

No good liar lies all the time. The best liars very seldom tell full-blown lies, always preferring to lie by omission, by distortion, by half-truth, by disproportionate focus, and by uncritically reporting other people’s lies in a way that suggests they’re true.

It’s all moving so fast now. Censorship and propaganda, the two arms of imperial narrative control, are escalating like nothing we’ve ever seen before. The doors on information control are being slammed and bolted shut all around the world as fast as the empire managers can get away with it.

2 Replies to “Yes, we are being lied to. Massively.”